Do you, like me, associate a special place with a specific colour? Take Taos, New Mexico. I’ve been there in three different seasons, yet for me, one colour signifies this sun-filled high-desert town—corn yellow.

Maybe it’s the crisp brilliance of the thin air at 2100 metres, a spot some call the birthplace of the sun. Or the pure yellow of aspen leaves in autumn. Or maybe it’s because of a soup.

Yes, a soup. A soup from a recipe in Gourmet in November 1993 called “Corn Chowder from The Historic Taos Inn.”

Many years ago on a ski trip (BTW, Taos ski instructors wear yellow), Magellan and I stayed at the Taos Inn. I remember a Sunday night in January, when we saw a bride in her wedding dress and cowboy boots and a groom in blue jeans, celebrating with their friends in the Inn’s Adobe Bar. Corn chowder wasn’t on the menu—though corn liquor surely was. As we listened to the country-and-western band and watched the bridal party dance, I ate the best bowl of beef and pork green chili I’d ever tasted.

Before I was a jubilado, my girlfriend Pat and I flew to Albuquerque one September, rented a convertible and spent a week in the sunshine. (From Pat’s diary—and another reason I associate yellow with Taos—“blazing chamiso shrubs dotted the hillsides.”) After our visit to Georgia O’Keefe’s home and ranch, we stopped at the Taos Inn for dinner, where my taste buds were treated to another bowl of green chili.

But I digress. Let’s get back to Taos Corn Chowder.

Glistening with the goodness of late summer

Pat amid the abundance of yellow chamiso near Taos 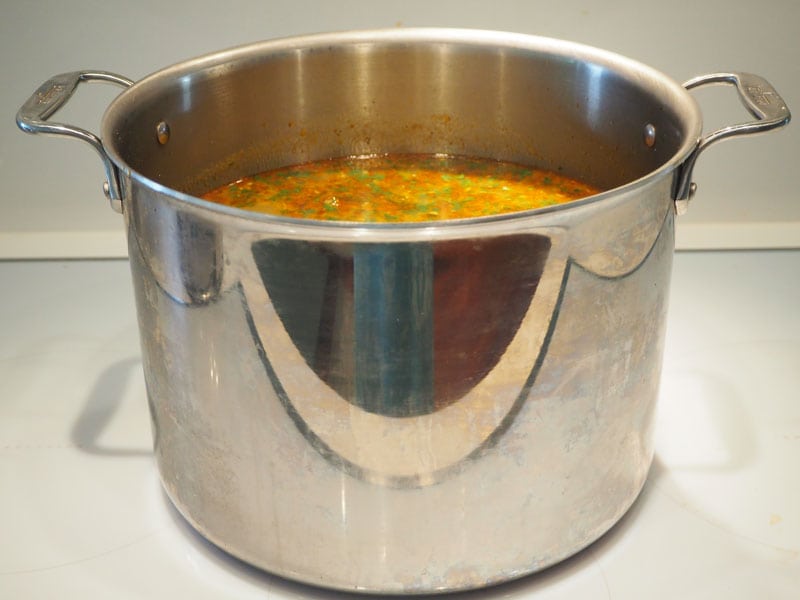 Corn chowder, a reminder of summer's sunshine when we have a bowl of it for lunch in the grey of November

Every autumn for 23 years I’ve been making this soup, Magellan’s favourite, adapting it so much that the recipe has now become my own. I triple the amount of corn. (The high ratio of potatoes to corn in the original recipe defies the name corn chowder.) I use yams instead of sweet potatoes for colour and food value, and prefer green poblanos to red peppers because the former seems more authentic to New Mexico. For protein, I add chorizo, a mix of mild and spicy. Marjoram dances better with corn than basil so I’ve switched herbs. And so on…

A kernel of wisdom: this recipe makes 20 servings, so either make it for a large party or package it for your freezer like we do. Even if it doesn’t remind you of Taos, with every spoonful you’ll have a sweet memory of summer.

Save Print
Make this recipe in August when your local corn is at its finest. It takes some time, so turn up the music and start chopping. To accompany this corn chowder, bake your favourite cornbread. The soup freezes beautifully, a good thing as the your stockpot will be three-quarters full with this recipe.
Author: Spice
Serves: 20
Ingredients
Instructions
3.5.3208

This soup makes a tasty dinner when accompanied by more corn. My friend Teresa and I agree that Craig Claiborne’s recipe for Jalapeño Corn Bread is one of the best. Newly in love with Grand-Staircase Escalante and Hell’s Backbone Grill in Boulder, Utah, I also like Blake and Jennifer’s recipe, Marry-Me Cornbread, which can be found  in their cookbook A Measure of Grace. The winning ingredient in both recipes is (sacrilege!) a can of creamed corn.

We used to think Alberta’s Taber corn was the best until a few years ago when we tasted Pam and Ron Tamis’s (Vision is our favourite of their corn varieties) at Vancouver’s Farmers’ Market at Trout Lake. It may be partly because of the longer growing season in BC compared to Alberta and Saskatchewan. Rondriso Farms, which has been in the Tamis family since 1958, is in Surrey.

If you’re in Saskatoon, get your corn from the Cole’s Market Garden at 3521 Mount Royal Avenue south of the Saskatoon Golf & Country Club.

You can find our more about the painting, “Taos Inn” by Art West, a.k.a. Alan Heuer, here.