One Saturday morning a few weeks ago we awoke to an email from our granddaughter Clare. She’d been working at a café on Granville Island for the summer and, having received her schedule for the following week, she suggested we go on a mini BC vacation on her two free days.

Where to go at the last minute? With the “northern peso” so low, “Beautiful British Columbia” has been inundated with record numbers of tourists—up 14% over last year by the end of May, and I expect the summer continued that trend.

Independently, Magellan and I ruled out the Gulf Islands (ferries and rental cottages likely fully booked) and coincidentally, both of us searched for accommodation around Pemberton. Magellan found the winner, so to speak.

Under lead-coloured skies on the Sea to Sky Highway, our drive to Pemberton took the requisite two-and-a-half hours. None of us had ever been in this quirky small town, which looks a bit like a movie set for a ‘60s western. Clare and Magellan bought local beer; I got Fort Berens wine, which is produced nearby at Lillooet. At AG Foods on Frontier Street, we bought holiday fare: a pound of bacon, and a bag of potato chips. We stopped at North Arm Farms for the real thing, freshly dug potatoes (Pemberton is the “Seed Potato Capital of the World”) plus green beans and blackberries. As per the cottage owner’s instructions, “…you’ll see the rainbow metal crossbar gate with the purple smiley face,” we found the place.

Like the town, the log cottage was kind of quirky. A steep, log ladder led to the bedded loft. We let Clare climb that; Magellan and I claimed the foldout fold-inward-when-you’re-sleeping couch. By the fridge with a wrong-side door, a large cardboard sign over a tall stainless-steel bin constantly warned us to take our garbage away with us or we wouldn’t get our damage deposit back. While the kitchen was well equipped, there was no dining table in the cabin. Outside there was a huge screened gazebo outfitted with chairs for ten people, but no table, and in the cedar forest above the cabin, another large, outdoor sitting area sans table. Occasionally, one bar of service darkened the screen of our cell phones. The place was just right. 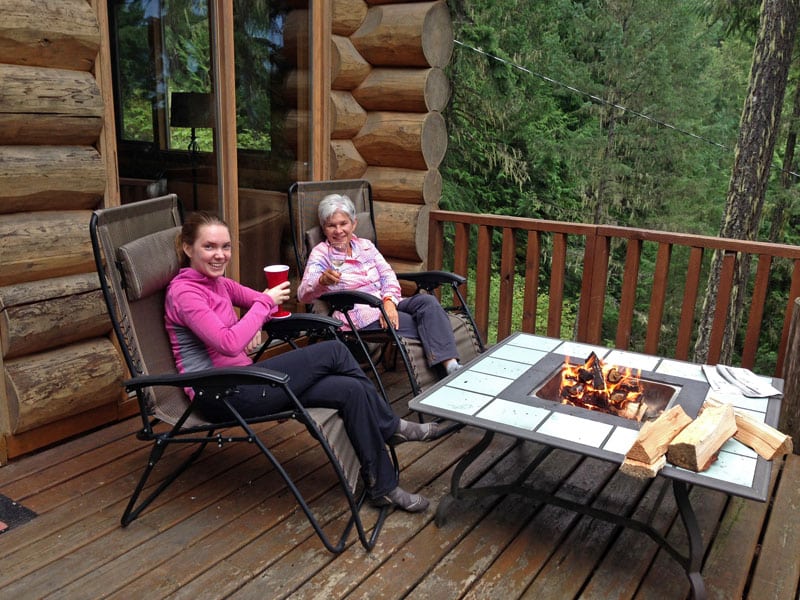 You wouldn’t expect to find tasty Thai food a few miles away, would you? Clare, for her first time, drove Rove-Inn (we’ve finally named our vehicle) to Barn Nork Thai Cuisine, Pemberton’s first Thai restaurant, which is in a restored barn in the countryside near Lil’wat Nation. The spring rolls were light, non-greasy and full of flavour. The Green Curry Chicken and Stir-Fried Eggplant with Thai Basil were delicious and the Beef Massaman Curry made with short ribs and Pemberton potatoes in a complex sauce (“It’s star anise and many other spices” the waitress told us) was as good as any Thai dish we’ve had in big-name restaurants in big cities around the world.

A little rain fell overnight, ineluctable here in the land of the rinsed skies. Undeterred by the morning mist, we drove to the crowded parking lot for the hike to Joffre Lakes, a trio of teal-blue beauties.

Magellan and I had hiked this top-rated trail in September 1998. (Remember it, Judy and Mark—three hours each way of driving, four and a half hours of hiking?) What a difference 18 years makes. Clambering over a boulder field, stepping over gnarled roots and sinking into the mud are a thing of the past—the path has been covered with dirt and gravel and more wooden bridges have been added. The trail, once somewhat remote, is now so packed with hundreds of hikers that it’s impossible to have a bush pee without bushwhacking. And instead of mountain views, a ghostly mist engulfed us all along the sub-alpine trail to Upper Joffre Lake.

Scrambling over chunky boulders to get nearer the lakeshore, we stopped to nibble on cherries, goat cheese, chocolate and shortbread cookies, disappointed that the fog was veiling the area’s beauty. All of a sudden, the sun unmasked a few white patches of Matier Glacier. Five minutes of panoramic vistas!

Island in the mist?

A patch of blue

A few hours later, we were at Blackbird Bakery in Pemberton, sipping lattes and eating stickybuns, overproofed cinnamon bun dough laced with brown sugar and seasonal fruit, then baked like a bundt cake. Clare, with her newfound skills acquired at Off the Tracks café, gave us a lesson on what makes good coffee art.

Back at the cabin, we gathered around the tiled coffee table on the deck, Magellan building a fire in the metal pit in the centre. Energized by our hike and buoyed by the champagne I’d opened to celebrate Clare’s achievements over the past year, we spent the entire evening around the fire.

What is it about the primal act of watching a fire that warms the conversation? We talked and laughed the night away. I told Clare about my 88-cents-an-hour waitressing days at Waskesiu National Park. Every time I went through the swinging doors to the kitchen from the dining room and called out an order, be it whitefish, steak or sausages, Bill the owner/cook would shout, “Goddammit, why the hell do they want that?” Clare told us about her more positive experiences working at the café.

She also told us more about the second floor of an old house in Halifax that she and a friend have rented and the fun they’ll have furnishing it. Around their small, claw-foot tub, there’s a shower curtain featuring monkeys, and their landlord has lent them a green, fake-leather sofa for the living room. “I think I’ll be putting in an IKEA order next week for my bed and desk,” she said. Magellan and I told her about some of our early homemaking efforts, like building a stereo stand/book case from cement blocks we painted fluorescent orange and lime green.

We baked potatoes in the coals in the fire pit on the deck, the smoke mingling with the mist. I showed Clare how to cook green beans so they retain their vivid colour and how to determine when salmon is done. “We don’t want you to be a starving student,” said Magellan, as we were eating around the fire, “you have to call and let us know when we can help out.” “I’ve heard that grad students are the ones who get scurvy,” Clare told us, “so don’t worry about me.”

All too soon the next morning, the three of us were back in Vancouver, smoke lingering on our clothes, the only mist behind my sunglasses as we dropped Clare off and drove away.

As their sign outside Barn Nork Thai Cuisine says,  it’s “The Best Curry on Mount Currie.”

We made two trips in two days to Blackbird Bakery in Pemberton with Clare, and Magellan and I went back last week on our way to the Chilcotin.

Copeland, Kathy and Craig. Don’t Waste Your Time in the BC Coast Mountains. Riondel: Wilderness Press, 1997. Kathy and Craig, authors of our favourite hiking guidebooks, give Joffre Lakes four bootprints—their highest rating. Round trip (the map below shows only one way), it’s ~11 km.

North Arm Farm is a good place to stop for veggies and fruits, jams and if it’s open, onsite Solfeggio Restaurant for coffee or lunch.

Clare says everything’s good at Off the Tracks café. The food we’ve eaten there sure was, especially the chorizo and yam tacos, and the date squares.

Gray Bay: What’s in a Name?