Discovering the literature and poetry of a country we’re visiting: for me this is one of the greatest pleasures of travel. And what a thrill when it happens in your own country like it did in the Yukon this summer.Even if you’re not Canadian, you can probably recite the opening stanza to what’s probably one of the most well-known poems in our country, “The Cremation of Sam McGee” by Robert Service:

There are strange things done in the midnight sun
By the men who moil for gold;
The Arctic trails have their secret tales
That would make your blood run cold;
The Northern Lights have seen queer sights,
But the queerest they ever did see
Was that night on the marge of Lake Lebarge
I cremated Sam McGee.

While ambling through Dawson City, Ruth Ann and I bought Volumes I and II of “A Little Robert Service,” petit thirty-two pages booklets published by PR Services in Whitehorse. Brilliant marketing. What fun we had reading them aloud to each other in the little cottage we rented, surprised both at the lines we remembered and those we were sure we’d never heard like “The Spell of the Yukon,” which gobsmacked us—twice—when Ruth Ann read it aloud and again when we saw it painted on the side of a building.

Ruth Ann and I saw Robert’s house and heard the story of his life from Freddy, a superb guide with Parks Canada who shared Robert’s life and words with us. Phrases like “gold lust,” “leaping to wealth in our visions” and “I am the land that listens.” Did you know he made $500,000 on his first book alone? He was a banker and obviously a wise man. Instead of accepting the offer of the return of his $100 investment back when his books became profitable, he asked for a ten percent commission on each book. 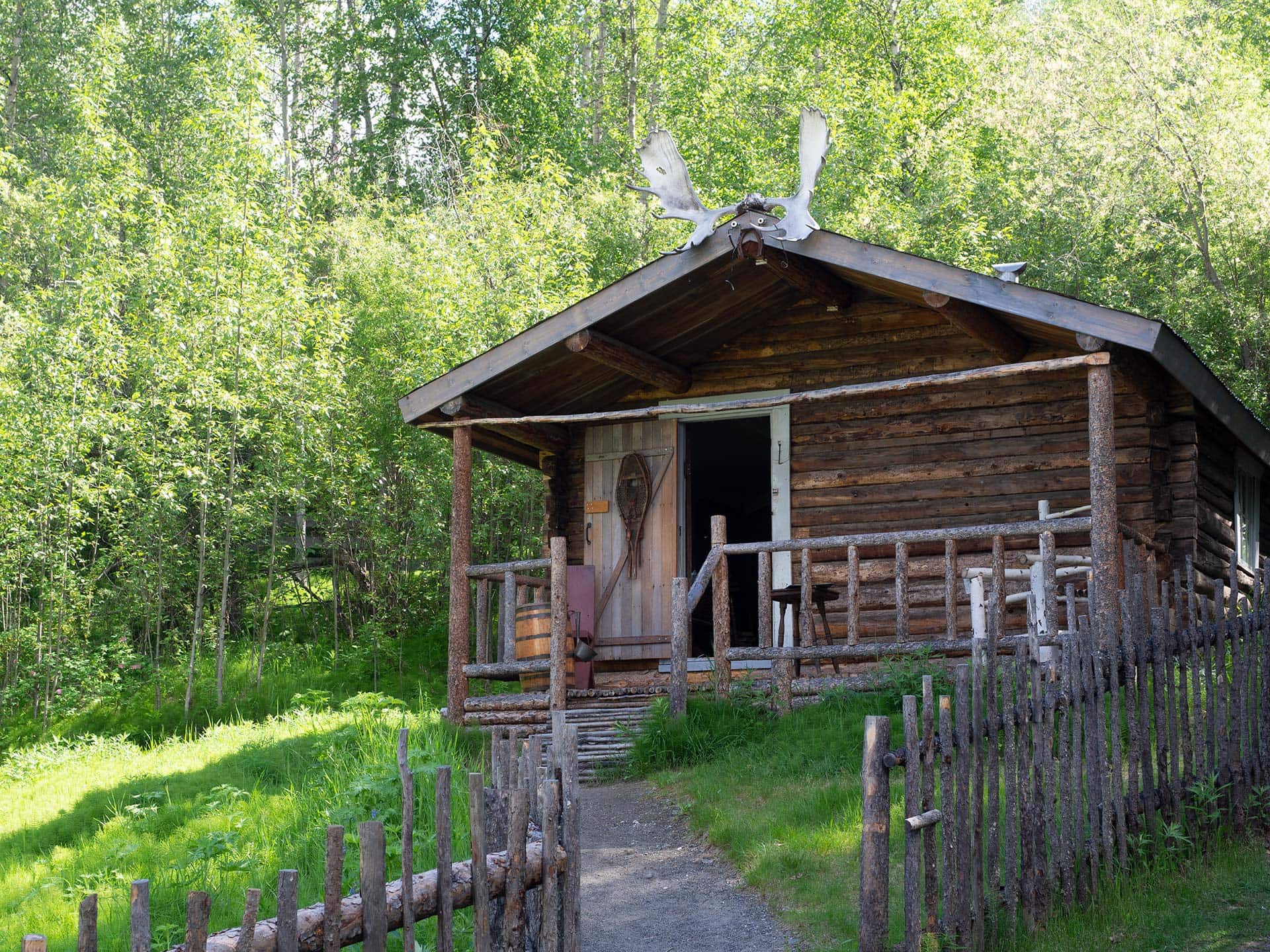 Robert wrote on the ceilings and walls

Robert wrote 1,500 poems of which two-thirds were published

After Magellan arrived in Rove-Inn and he and I left Dawson City for Tuktoyaktak, in some magazine I picked up somewhere in the Yukon, there was an article about women poets today writing verse about the Canadian North’s past and present that could stand up to that of Robert Service. I added the name Clea Roberts to my To-Do list. When we stopped at Mac’s Fireweed Books in Smithers, I asked if they had Roberts’ books. In short time, two of the staff pointed me to three different sections of the store (by the till, in the poetry section and in Canadiana.)

Here are a few lines from Roberts’ poem about a pragmatic prostitute in Dawson City during the Gold Rush Days, “Caption 1. In which Pearly MacMillan addresses her photographer.”

Take the photograph
that makes me
permanent
in this world
the one I send home
with letters, a pinch of gold dust,
a few Indian trinkets.

They’ll never know
that everything is borrowed:
the silk dress, the rifle,
the bags marked gold
and filled with gravel,…

And this from Dawson City of today in “Transmutations:”

And there are days
that begin
with the sound
of trucks whistling
down the highway,
their J-brakes
a thick stutter,
the lonely
syllables of dawn.

Trucks bringing
the bread and the milk,
the table and chairs,
the newspaper,
the blue curtains,
whole lives in fact
or at least the pieces.

Her imagery is haunting. “Dusk is a place/where day and night/emulsify.” “Just the forest’s worry of branches/knitted together and waiting.” “the congregation of stumps.” “the soliloquies of gulls.” Roberts lives in Whitehorse on the Takhini River. Her poems have been published in journals and anthologies from Canada to Australia, her  debut book of poetry translated into German and Japanese.

Poetry from the 'polar zone'

As Leonard Cohen wrote, “Poetry is just the evidence of life. If your life is burning well, poetry is just the ash.” Contact your library or better yet, buy the  books, the “ash” as Leonard says, of these two smokin’ poets from the Yukon—guaranteed to ignite a fire in your soul.

Roberts, Service. A Little Robert Service Volume 1 and Volume II. Whitehorse, Yukon: PR Services. Of course there are about ten other books of his poetry to choose from…

Roberts, Clea. Here is Where We Disembark. Calgary: Freehand Books, 2010. She quotes Robert Hass in the first page of this book: “Longing, we say because desire is full/of endless distances,” a prelude to the Yukon experience that reading her poetry instills.

Latitude 65: Within a Degree of History
7 replies

Aurora Borealis: Searching for the Green Grail in Norway
Scroll to top