I was kicking myself.

Three years ago in Seattle there was an exhibition of Yayoi Kusama’s Infinity Mirrors. Six individual rooms, small and dark. Each one painted with polka dots and pumpkins illuminated by hundreds of LEDs reflecting endless pinpricks of coloured light onto mirrored walls immersing you into a kaleidoscopic wonderland. But I was too late. The exhibition sold out quickly and without tickets, you had to queue for hours with little hope of getting in. I felt even worse when Gail, Ginger and Carol Ann talked about how spectacular it was, despite the fleeting time (only two or three minutes) you had in each mirrored cubicle where only two or three visitors were allowed at a coveted time-slot. So you can imagine how excited I was to discover the Henie Onstad Kunstsenter at Høvikodden outside Oslo has one of Kusama’s Infinity Mirrors on permanent display. Even better, it was a slow day—Magellan and I had Infinity Mirrored Room, Hymn of Life to ourselves for as long as we wanted!

Yayoi Kusama is the most famous woman artist living in the world today. In the last decade she’s had five major exhibitions tour 34 cities and garnered the highest attendance globally at one of them (two million)! Time magazine named her one of the “100 Most Influential People.” She’s 91 years old and, for the last four decades, has lived voluntarily in a psychiatric hospital. CuratorAlexandra Munroe says,

She is the undiscovered genius whose late fame is justly deserved. She is the self-identified psychotic whose difference we champion. She is also the creator of bright, immersive and spectacular art that is uncannily suited to Instagram, the neural network of contemporary influence. And, in spite of all her tribulations, her art is enormously generous—transcendent even—refracting our tiny selves through a pulsing eternity.

Kusama’s Infinity Mirrored Room–Hymn of Life went on permanent display as part of Henie Onstad’s 50th anniversary celebrations in 2018. Like Kusama, the museum doesn’t show its age. It’s named after Sonja Henie, the famous Norwegian figure skater (three-time Olympic Champion, ten-time World Champion—more championships than any other woman figure skater) who made millions in ice shows and as a Hollywood film star—and her husband, shipping magnate and art collector Niels Onstad. Henie rhymes with “penny” and when she died in 1969, Henie had more than a few—her assets were worth $47 million and included a superb collection of modern art by the likes of Picasso, Matisse, Bonnard, Miró, Villon, Rouault. Saving our pennies, Magellan figured out the excellent bus schedule and in half an hour, we were at the museum’s door. 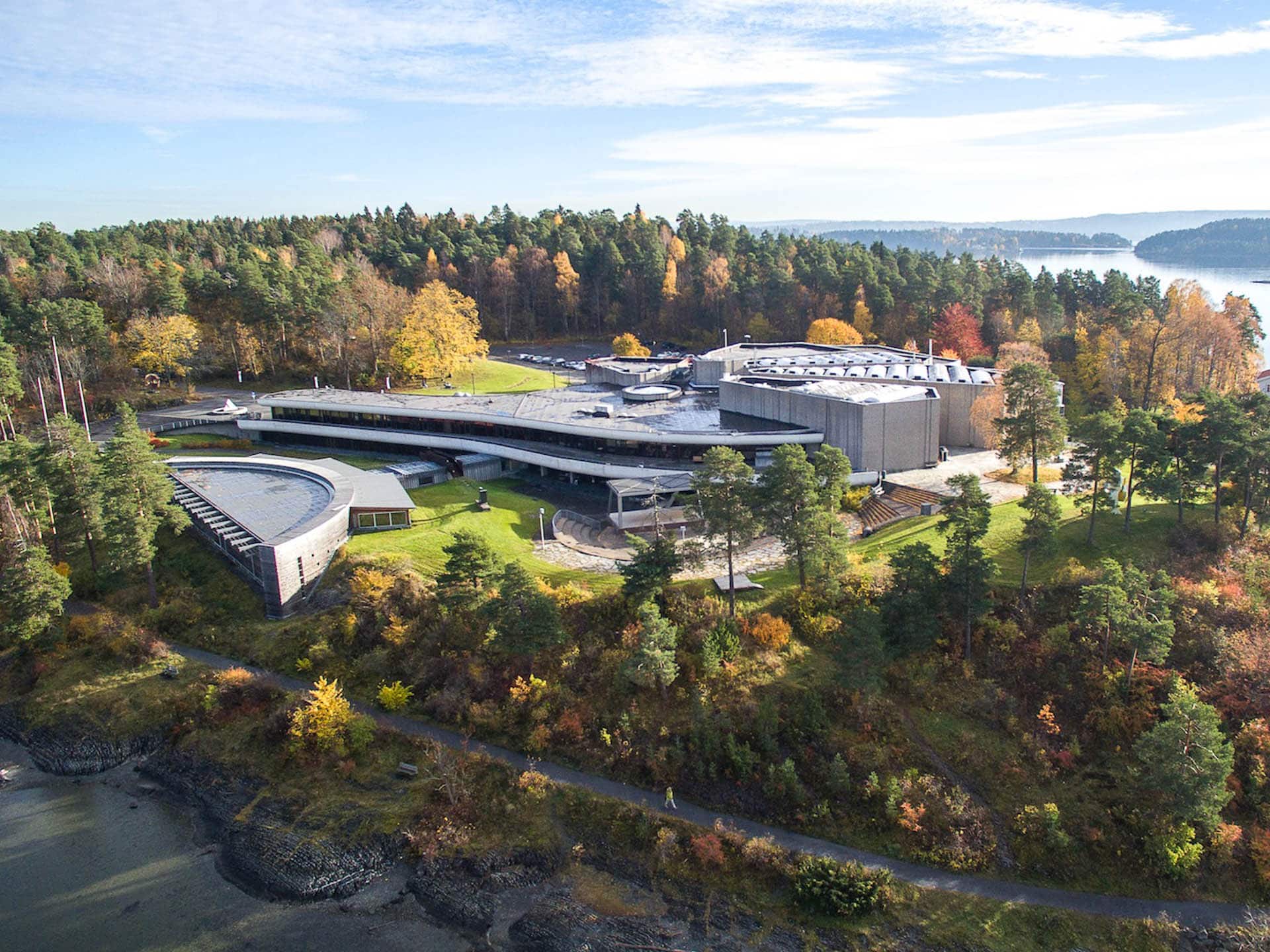 Sonja and Niels at the Opening of their gallery (Photo: Henie Onstad Kunstsenter)

Like so many women artists, Kusama’s universal fame took perseverance. She was born in rural Japan into a wealthy family that sold flowers from their nursery garden all over the country. But it was a troubled, unhappy family. Kusama’s father was a philanderer. From a very young age, Kusama’s mother forced her to spy on him and his mistresses and report what she saw—for which she received the brunt of her mother’s rage. Kusama’s first hallucinations (she calls them depersonalizations) occurred when she was a young girl in the family’s fields drawing flowers in her sketchbook and heard the violets talking to each other. Her mother destroyed her paintings but Kusama persevered, using her art to try and make sense of her hallucinations. At the age of 11 she drew her first pumpkin, which she says also spoke to her, and won a prize for it. (Remember Kusama’s pumpkin sculpture from our blog about Naoshima?) After the attack on Pearl Harbour Kusama was conscripted to a factory that made fabric for parachutes—but even while working there fulltime, she still produced 70 watercolours a day.

I was happy to read that a pivotal event in Kusama’s life started in a bookshop where she discovered the work of Georgia O’Keeffe. Kusama wrote to O’Keeffe, included some of her own watercolours and asked for advice on New York. She received an encouraging response. In 1958 Kusama arrived in the Big Apple with some of her drawings and 60 silk kimonos that she hoped to sell to support herself. Imagine the courage it took leaving Japan, leaving her family, leaving to start a career in art in a foreign country. Within a year she held her first solo show and was soon recognized internationally as an avant-garde artist.

In New York Kusama met fellow artists Donald Judd (he lived in the same building) and Frank Stella. Her Infinity Net paintings, “a repetitive singular gesture of impasto in little loops, like interlocking scales,” the longest measuring 10 metres, were her breakthrough—both Judd and Stella bought them.

As a private aversion therapy to heal her feelings of disgust toward the sex she witnessed when she was barely above the age of a toddler, Kusama started making chairs and other objects covered with phallic forms made from stuffed fabric. Is this where Claes Oldenburg got his idea for soft sculpture? Did Andy Warhol rip off her repetitive forms for his wallpaper series?  At one time in the 60s Kusama was as famous as both of them and rightfully angry “at the way the men around her found fame with her ideas.”

Except for Joseph Cornell, her only known romantic relationship. (I’m a fan of his surreal boxes of found objects.) But Cornell’s mother, with whom he lived, cooled their relationship.

Then came the dots, Kusama’s big breakthrough, in 1965, with her experiments in transforming the repetitive loops and waves of her earlier paintings into a dizzying 25-square metre Infinity Mirror Room—Phalli’s Field (Floor Show),  a carpet of soft phalluses covered in polka dots. Kusama says, “they might represent the circles of the earth, moon or whatever you like.” That she wanted to “examine the single dot that was my own life among the millions of dots in the universe,” painting them to suggest self-obliteration and cosmic unity. “Polka dots,” she has said, “are a way to infinity.”

"I, Kusama, am the modern Alice in Wonderland."

"Forget yourself. Become one with eternity. Become part of your environment"

"All of us live in the unfathomable mystery and infinitude of the universe."

"Pursuing philosophy of the universe through art under such circumstances has led me to what I call stereotypical repetition."

"I am just another dot in the world."

"My life is a dot lost among thousands of other dots."

Thousands of illuminated colours blinking at the speed of light—isn’t this the very illusion of Life in our transient world?

(Among the prismatic carnival of colours bouncing off the mirrors in the cubicle sculpture at the Henie Onstad, we had that illusory feeling: Where does the room end and where do we begin?)

In 1966 for the Venice Biennale she created Narcissus Garden, “a lake of 1,500 reflective balls in which the viewer’s face was infinitely multiplied. She sold the balls for $2.00 each. “Your narcissism for sale” read the ad, foretelling how Instagrammers taking selfies have popularized Kusama’s work.

An outsider seeking fame, “When the summer of love arrived, Kusama sought to position herself as a kind of high priestess of flower power, staging “Body Festivals” and “Anatomic Explosion happenings” in which she painted naked partygoers with polka dots.” The following year she created a wedding dress for two that was worn at New York’s first homosexual wedding. She designed, sewed and sold polka-dot fashion with holes to reveal breasts and buttocks. “She was the scandalous exile. Media interest in her work had shifted from serious critical attention to exposés in the tabloids where her name became synonymous with skin painting and orgies.”

She was doubly an outsider – a woman, and a Japanese woman. She just wasn’t recognised in the way the white male artists were. In retrospect it is clear she was a very important figure both in minimalism and in pop art. Her work provided a link between the two, which was unique.

Deeply affected by the death of Cornell and her father soon after, Kusama returned to Japan and rented an apartment overlooking a cemetery. Her hallucinations and panic attacks returned and in 1977 to address her obsessive-compulsive neurosis, she admitted herself to a psychiatric hospital that offered art therapy. In the 80s her work became popular in Japan with gallery shows all over the country, performances commissioned for TV and increasing attention from museums.

In 1989 Alexandra Munroe, a curator at the Japan Society in New York staged an exhibition of Kusama’s work at the Center for International Contemporary Arts. Worldwide acclaim followed when her work was shown at the 1993 Venice Biennale and escalated five years later with a show at MOMA.

Kusama’s first “Infinity Mirror Room” in 1965 was priced at $5,000 ($2,500 for museums), but got no takers. Between 2014 and 2019, at least 11 international institutions acquired infinity rooms—some of them bought two. The Art Gallery of Ontario raised 40 percent of its $1.4 million purchase of a mirror room through crowd-funding and presale tickets.

Kusama (who is the same age as my mother) sleeps at the hospital every night and works in her studio across the road six days a week. A small team assists her in producing her painting, sculpture, poetry and fiction. She rarely gives interviews, makes her own clothes and lives frugally. In a review in The Atlantic she is quoted as saying,

By continuously reproducing the forms of things that terrify me I am able to suppress the fear…That turns the frightening thing into something funny, something amusing.

Here’s a link to the Henie Onstad Gallery’s website.

Vanity Fair has a good article about Sonja Henie.

Much has been written about the world’s most famous woman artist living today. References I used are The Guardian, The Atlantic, CNN and  Artsy.

The Atlantic Road: Angles of Beauty