It is said you can see more Greek ruins in Sicily than in Greece itself.

Which isn’t surprising. When it was part of Greater Greece, Sicily’s population exceeded three million, more than that of Athens and Sparta combined.

Some experts even claim the Temple of Concordia in Sicily is the best-preserved Greek temple in the world, better than the Parthenon. And it’s only one of the ten Greek Doric temples at Valle dei Templi—the largest archaeological site in the world.  Which is why Magellan and I decided we needed a full day there.

Covering 1,300 hectares in the province of Agrigento near the city of the same name, the Valle dei Templi has been inhabited over the ages by Greeks, Romans, Byzantines, Arabs and Normans. It contains temples, a necropolis, a Hellenistic Roman district, numerous fortifications, two agoras, a garden, an Olympian field, Paleochristian basilicas…

We arrived early on a Sunday morning in April, wanting to begin at the Museo Archeologico when it opened at 9:00 am. We knew parking was difficult and that thieves frequented the area. A couple of “parking assistants” motioned us into a spot, right across the road from the museum, and we duly paid them protection money. Only to find the museum closed for the day!  “Tomorrow,” said one guy, pointing at his watch.

We couldn’t leave the car there as the Valle dei Templi  is quite a distance from the museum. But Magellan had strategized the parking beforehand, knowing the good spots are captured by tour buses that line up early,  disgorging visitors like Lego people on an assembly line to this UNESCO site. We parked for free by a dilapidated public fountain on the edge of the city of Agrigento (more than a kilometre from the entrance). The trade-off for walking along Strada Panoramica was the photo-op overlooking the Valle dei Templi, misnamed as it’s on a ridge sloping to the sea five kilometres away. So let’s call the place what the Greeks named it: Akragas.

The Greeks founded Akragas in 581 BC. In its Golden Age a century later, it’s estimated 800,000 people lived within its thirteen kilometres of fortified walls. It was the most luxurious city in Greek Sicily, the wealthiest from producing and exporting grain, wine and olives, and breeding livestock. Medicine was one of their favourite sciences.The theatre art of performing tragedy began here. Empedocles, the philosopher who introduced moderate democracy, walked around in his red cloak embroidered in gold, a ring of laurel leaves encircling his long, curly hair. He used to say, “The Akragantines ate as if they would die tomorrow, whereas they built as if they would live forever.”

As their riches multiplied, so did their days of laziness. They opted for opulence. Hedonistic was the perfect Greek word for the Akragas lifestyle. “The Los Angeles of the ancient world,” says our Insight guide.

Imagine the wine cellar of the wealthy citizen Gellius—300 “barrels” carved into the rock, each holding 2,600 litres. The air must have been filled with the clinking of glasses and people repeating “Yamas!” (Yet in the rich vocabulary of the Greek language, there’s no specific word for hangover.) More hedonism: The wealthy Antisthenes invited everyone in the city to his daughter’s wedding, which featured a bridal procession of 800 chariots leading to the Temple of Hera.

Declared a national monument in 1748

That’s where Magellan and I started our rendezvous, at the Temple named for the goddess of fertility and marriage. Like all of the Greek temples here, elegant in the Classical Doric style, the Temple of Hera faces east. “Listen to this,” I said to Magellan, summarizing from the brochure we’d bought onsite. “Before a marriage ceremony began, the couple to be betrothed would throw cold water on an ewe lamb. If the lamb reacted in any way, the ceremony was delayed.”

At the Temple of Concordia, the architectural masterpiece of Akragas, a perfect match between the axis of the columns creates a gorgeous sensation of harmony. It was completed in 430 BC, two years after the Parthenon. Imagine coming here to escape the noonday sun, make votive offerings to the gods or find a receipt for your wine in the temple archives. 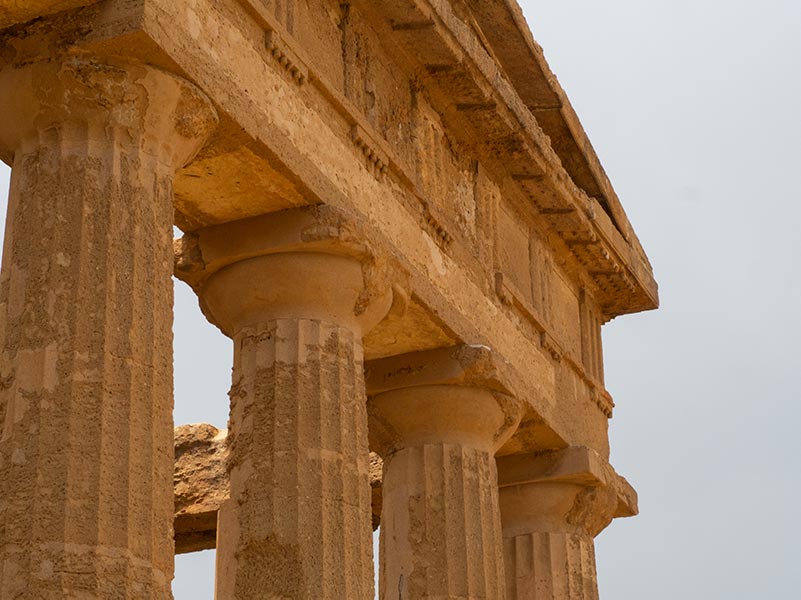 Columns taper to the top, a convexity suggesting strength and elegance

Akragas is a treasure house of Greek Classical architecture. Structures with a temple front, decorated columns, repeated ratios and a symmetrical façade, a style that lasted for more than a thousand years, travelling to Sicily from Greece in its youth, revived around the world from Tehran to Toronto in its jubilado years.

“I want to figure out the construction,” said Magellan, reading Giuseppe’s brochure and lying on his back to get better angles.

"And to think I worry how we'll move our washing machine down two flights of stairs when it fails!" Magellan says. (Illustration from Guiseppe's brochure)

Carving detail on the capital of a column

The largest temple in Sicily (and one of the largest and most beautiful in antiquity) is the Temple of Olympian Zeus. Almost as big as a football stadium, it could hold 42,000 people and was roughly 113 metres long and 56 metres wide, almost the same proportions as the Parthenon. The façade was supported by 38 Telamons—giant-sized male figures 7.6 metres tall—standing on plinths half the height of the walls. The statues represented the three known racial types of the time: African, Asian and European.

A sandstone copy of a Telamon

One of the original Telemons

A model of the temple

The Temple of Olympian Zeus as it originally looked

The brochure we bought said Akragas was a “moderate democracy,” whatever that means. A drachma was the daily pay to slaves and foreigners for temple construction, equivalent to about Cdn$37 today. A sculptor was paid 60 drachmae, about Cdn$2,300, no matter how big the statue was.

This temple is the city symbol of Agrigento

And how did seeing Akragas make us feel? Magellan and I are struggling with this. My diary was inert. When we talked about it this week, “I’m glad we went but…” I trailed off, wordless.

Ruins are of us, yet apart, a heterotopia, etymologically meaning “other place,” hetero being Greek for “other,”   topia the Greek morpheme for “place.” In the heterotopia of Akragas, we were confronted, conflicted, with issues: the value of grandiose architecture, advances and declines of civilizations, and a feeling of personal inertia.

(Little did we know that in twenty-four hours we’d experience somewhat of a redemptive view.)

It was late afternoon when we plodded back to our parking spot. People were gathered at the fountain. One guy was washing his car. Some young people were filling large plastic jugs with water and hauling them to their campervan. A middle-aged man and woman had arrived on a motorcycle, stripped down to their undies and were washing their clothes in the fountain. We exchanged waves as we drove away.

Do Grigoli, Veronica. “A Dozen Safety Tips for a Holiday in Sicily.” The Dangerously Truthful Diary of a Sicilan Housewife. Posted  February 1, 2015. “Many areas in most cities in Sicily have “parking assistants” who will ask you for a euro when you park your car in a public street. This will be your only opportunity, as a tourist, to interact with the Mafia! If you refuse to pay this protection money, you may return to find your car has been broken into. If you find one area strangely free of parking attendants, beware. It will be designated a free-for-all zone where any petty criminal may steal anything he wants.”

Gerard-Sharp, Lisa. Insight Guides Sicily. China: Apa Publications, 2016. You’ll find five pages of info on Valle dei Templi in this, the only guidebook we took to Sicily. “I knew I should have brought a picnic,” I said to Magellan as we ate a vastly overpriced arancini, a risotto ball of dried-out grains of cooked rice glued together with a floury sauce. Believe this guidebook and “take a picnic lunch to avoid the coach party options on site.” But don’t rely on its opening hours for the Museo Archeologico.

Di Giovanni, Giuseppe. The Valley of the Temples: The most sacred valley in the world. Agrigento: Siculgrafica s.c-AG. “Already Honorary Inspector for the Archeological Goods” is how Giuseppe describes himself on the cover. We bought this handy 48-page brochure onsite from a guy who may have been Giuseppe himself.

RD, Photoacademy. “Heterotopia, The Soul of Ruins in Vincent J. Stoker.” LOENKE magazine, June 29, 2016. Heterotopias, other places, are places within a society but apart. Like prisons, old-age homes, museums, cemeteries, ships, zoos, ruins… In trying to describe how Akragas made me feel, I had an image of the massive malls of marbled shops showcasing products for the uber-wealthy that Magellan, Clare and I saw in Hong Kong. (Today’s utopia for many.) A weird association, I thought. Maybe not. Vincent says: “First lesson: a warning against utopian projects, the desire for total mastery and perfection. Look at what those monumental projects have become, at what has recently been undertaken in Dubai?”

“Did you see any Mafia in Sicily?”

An Invitation to Roman Splendour