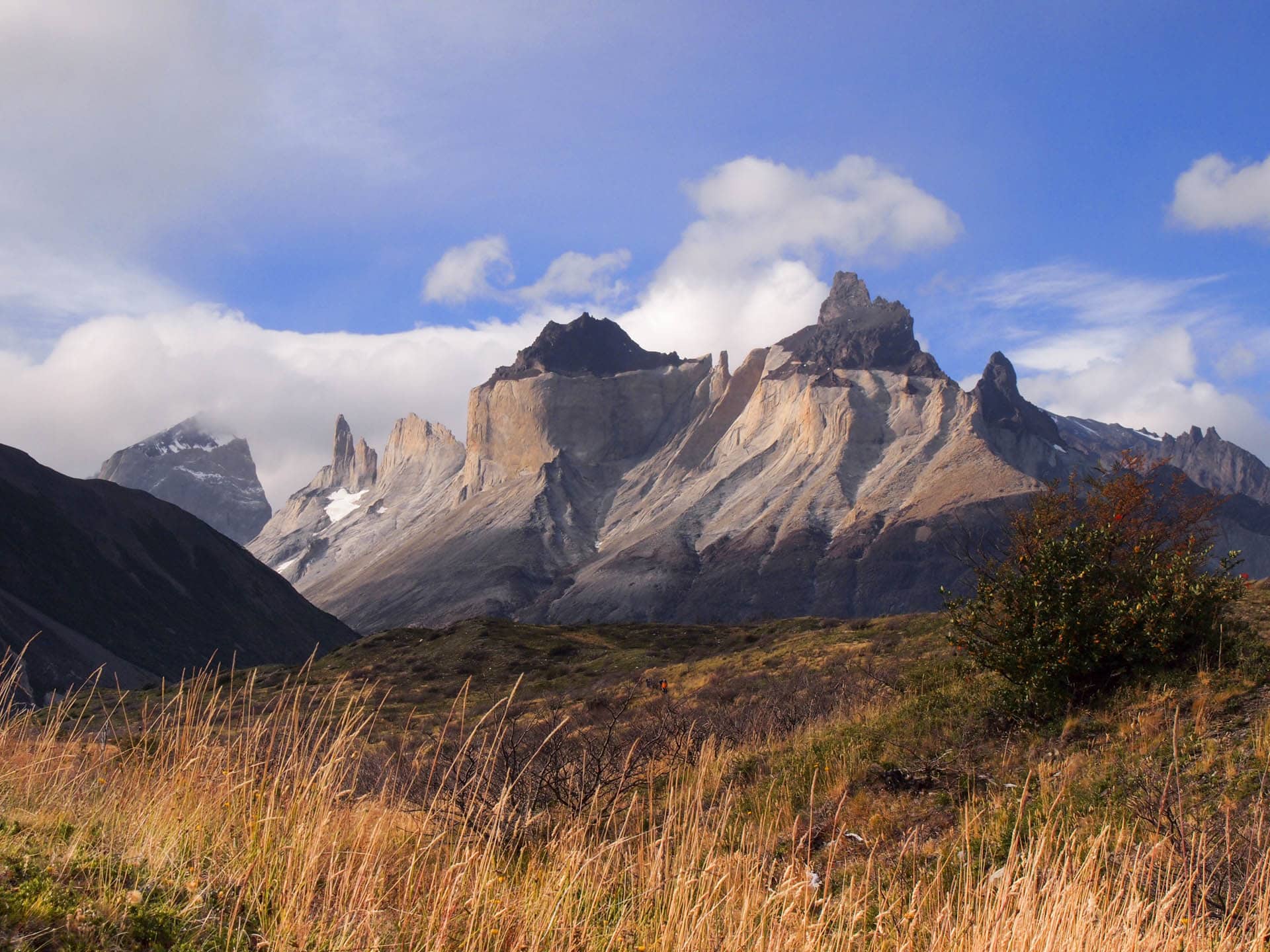 In W. O. Mitchell’s novel about prairie life, wind is a metaphor. But in today’s story about Patagonia’s Frenchman’s Valley, wind is the real force: raw, razor-sharp, and so powerful…well, let me tell you how fierce and after you watch Magellan’s video clip, you’ll see for yourself.

Valle del Francés (Frenchman´s Valley) is in the wilds of southern Chile. Its scenery is considered the most stunning on the famous, multi-day W Trek and the best in Torres de Paine Park, one of the reasons we chose it for a day hike.

Patagonia’s mountains are young, only thousands of years old. When the glaciers receded, granite was uplifted into walls of craggy peaks in the Cordillera Paine. One of the joys of hiking into Frenchman’s Valley is that it gets you up close to the iconic image of Patagonia, the Cuernos del Paine—the mountains with black-shale turrets that resemble cuernos, the Spanish word for horns.

Round trip, it’s 20 kilometres to see this magnificent valley of glacial cirques and geological formations: Hoja (Blade), Mascara (Mask), Espada (Sword), Catedral, Aleta de Tiburon (Shark’s Fin) and the magnificent Fortaleza (Fortress). And views on a clear day back to Lago Skottsberg that you walk alongside early on in the hike and to Lagos Nordern Skjold in the distance. Why all the European names? In honour of the early mountaineers in Patagonia. 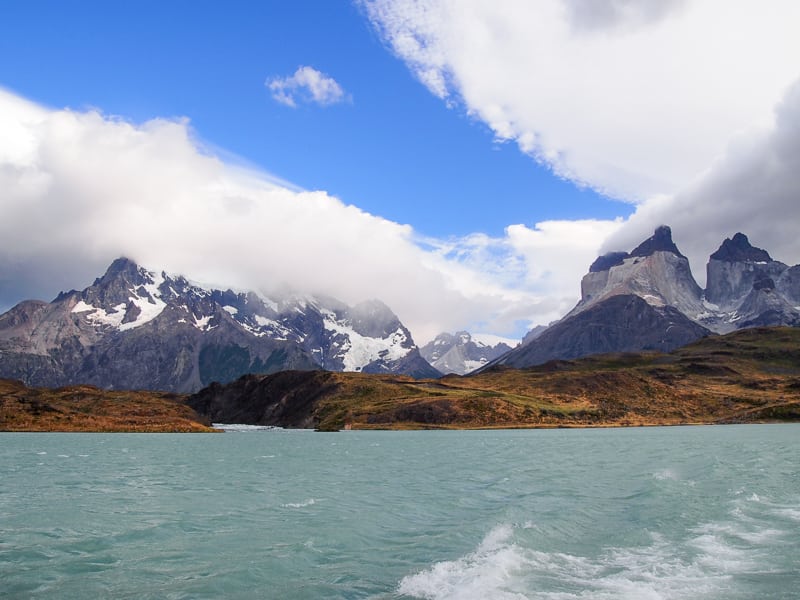 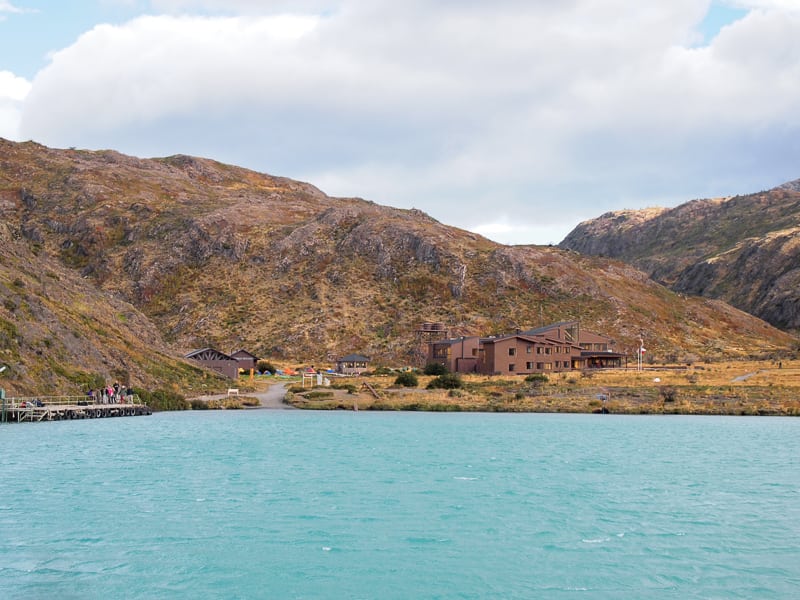 Refugio Paine Grande, the trailhead for the Frenchman's Valley portion of the famous W Trek 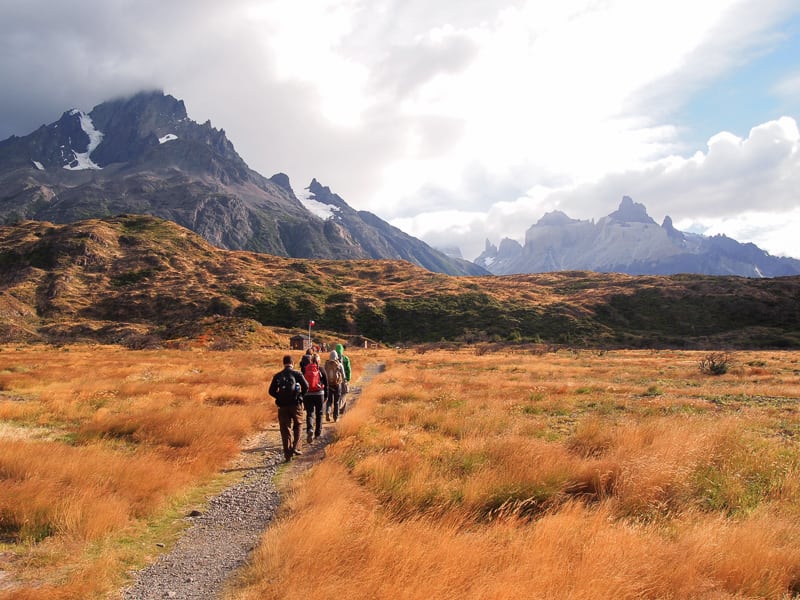 Paine Massif and Campground Italiano is 7.5 km in the distance 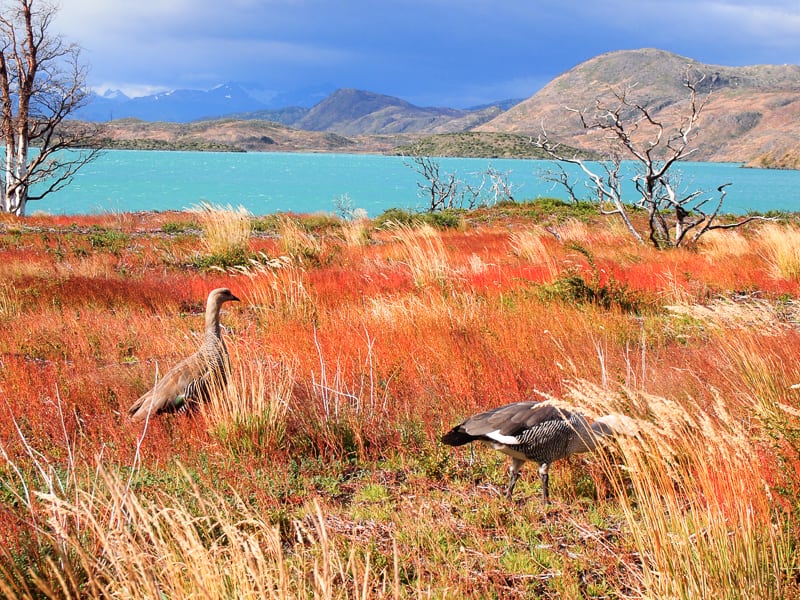 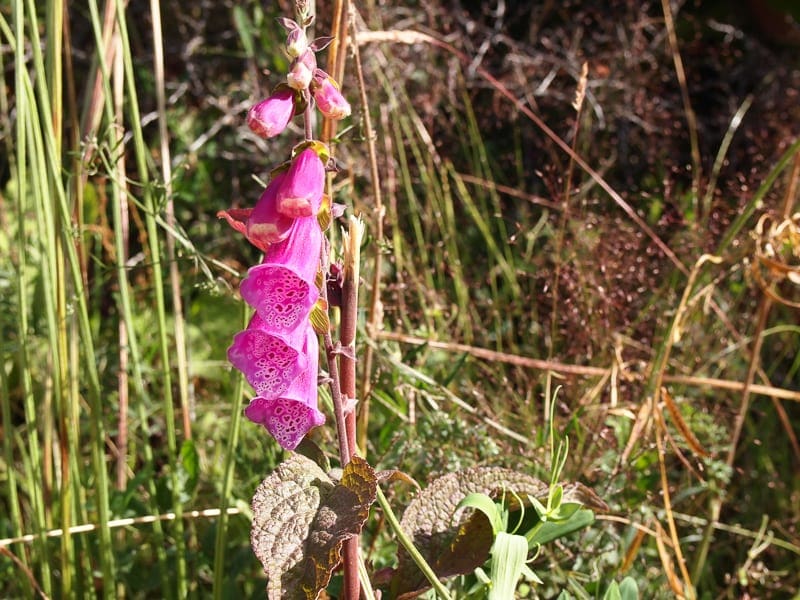 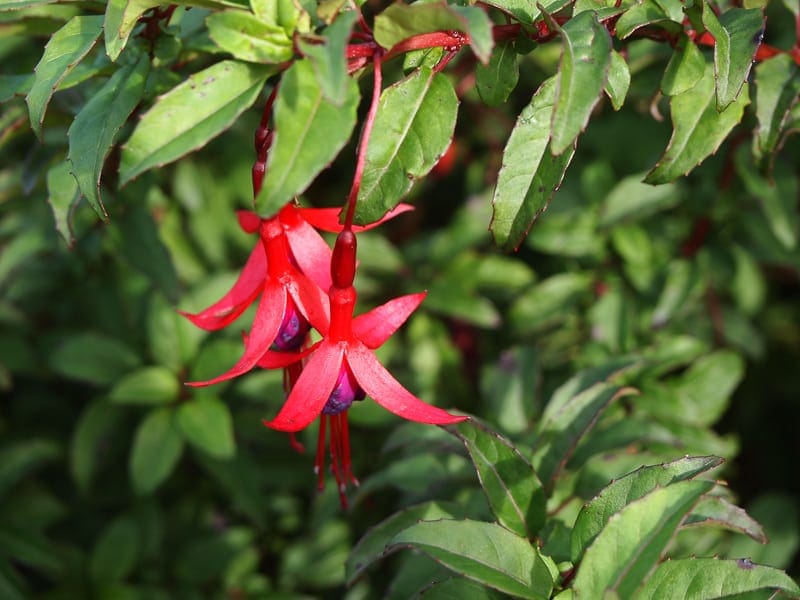 A light wind started on the ferry ride to the northwestern side of Lago Pehoe where the Frenchman’s Valley hike begins. However, much of the easy, pleasant trek (585 metres of elevation gain) is in a forest of lunga beech trees that protects you from the wind. Until you reach the snowy dead end at the foot of Monte Paine Grande in the glacial amphitheatre, that is.

“I’m sure glad we’re not hiking the W and camping here,” I said to Magellan when we reached the Campamento Italiano, crowded with tents, only half of the toilets open and those that were…well, never mind. Even being downwind wouldn’t help that situation. And being a primitive camper, I’m no princess when it comes to that sort of thing. 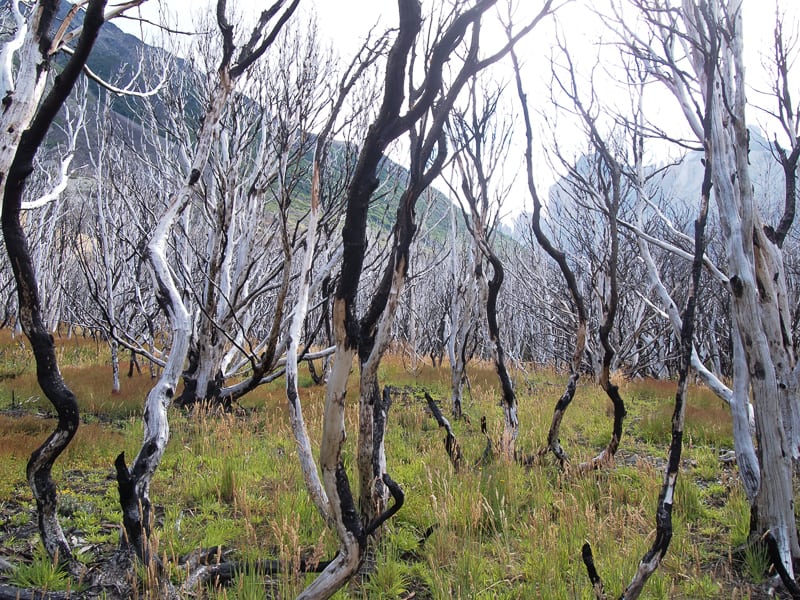 The silver and charred aftermath of a devastating fire in 2011 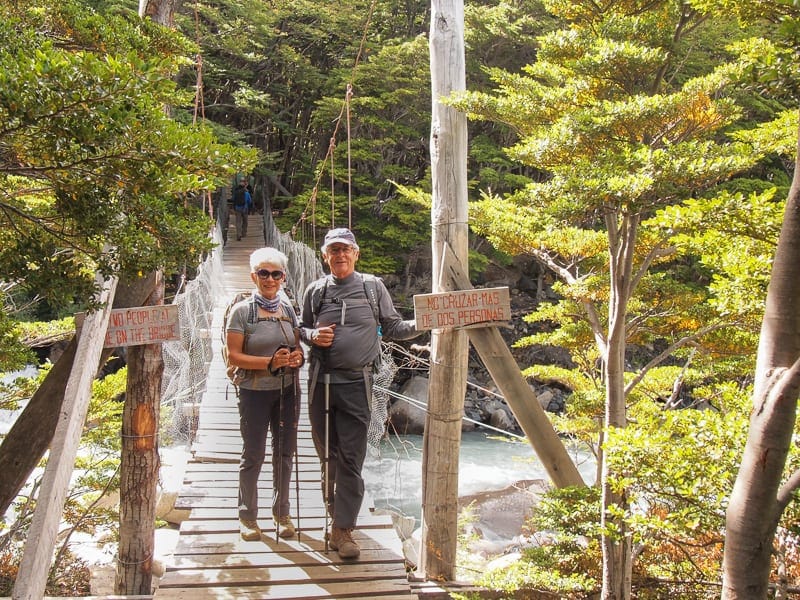 Suspension bridge over Río Francés near the Campground Italiano 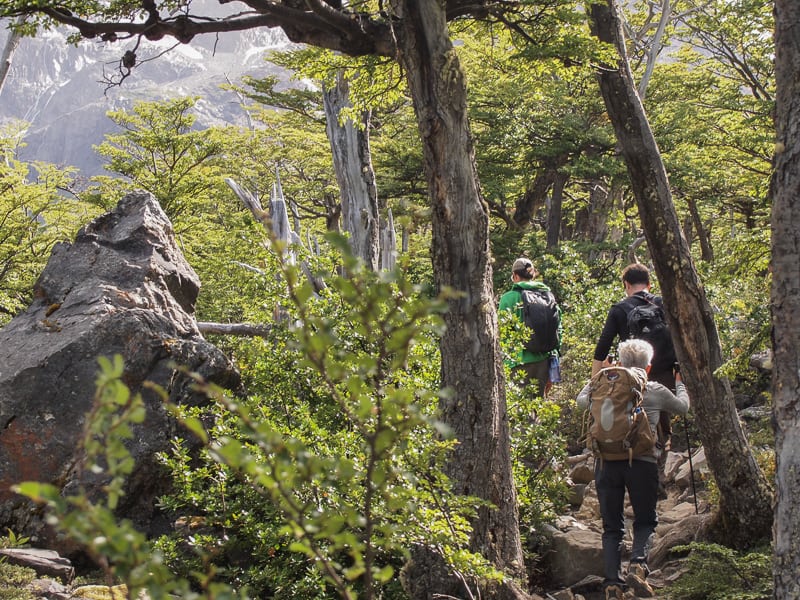 Strenuous section of Frenchman's Valley hike (the hike is rated high in difficulty by some, easy by others) but Alexanders, our guide, said his 89-year-old professor from Cambridge managed it 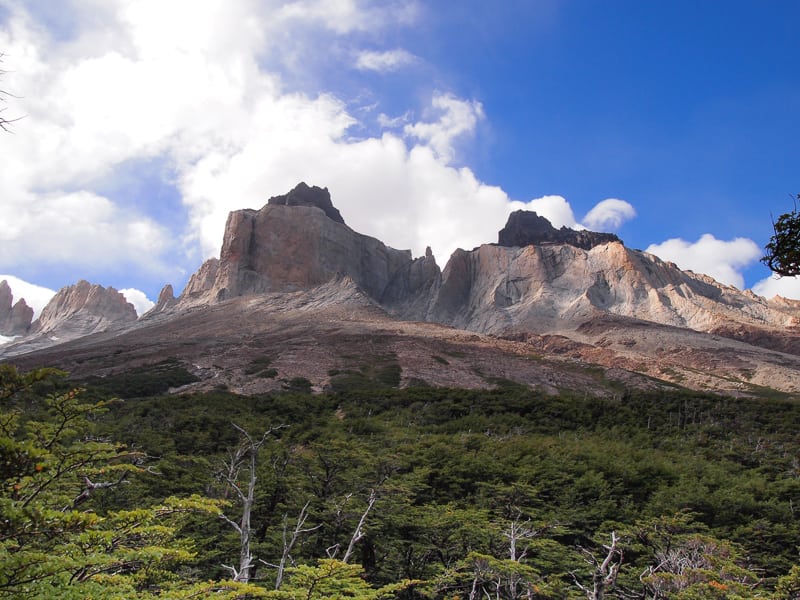 Which is my segue into Antoine de Saint-Exupéry. Remember his multiple award-winning book The Little Prince? There’s a reason why it opens with a marooned pilot. It’s because in the 1930s, Saint-Exupéry was a pioneering aviator. A director of Aeroposta Argentina, he flew the mail into the remote regions of Patagonia and wrote about those experiences in two of his other novels, Wind, Sand and Stars and Night Flight.

Imagine Saint-Exupéry’s main character in Night Flight, up in the air in his small plane like a condor being tossed about by the wind, a wind so strong he couldn’t touch down to his landing point—which was only 200 metres away!

Here’s Saint-Exupéry’s thrilling, nerve-wracking description of flying over Frenchman’s Valley in the bellowing wind and later, landing the plane on a lake :

I saw the landscape freeze abruptly where it was and remain jiggling on the same spot. I was making no headway….Vertical, oblique, horizontal, all of plane geometry was awhirl… My heart hardly skipped a beat when I was tripped up by one of the whirling eddies of air that the sharp ridge darted into my ship. If I felt anything unmistakably in the haze of confused feelings and notions that came over me each time one of these powder magazines blew up, it was a feeling of respect. I respected that sharp-toothed ridge. I respected that transversal valley opening out into my valley and about to toss me God knew how violently as soon as its torrent of wind flowed into the one on which I was being borne along…

I was wrestling with chaos…for forty minutes I had not been able to climb higher than two hundred feet off the ground… Then one hour and twenty minutes to get to nine hundred feet and another hour to cover the five miles to shore.

We felt those glacial gusts of wind when we reached Frenchman’s Valley, winds that undoubtedly contributed to the avalanche we witnessed  above us. And do you know what else we saw?

The water in the waterfall doesn’t fall. Strong gusts of wind cause the waterfall’s flow to billow upwards and twirl sideways to the north away from the highest summit in the range, Cerro Paine (3050 metres). 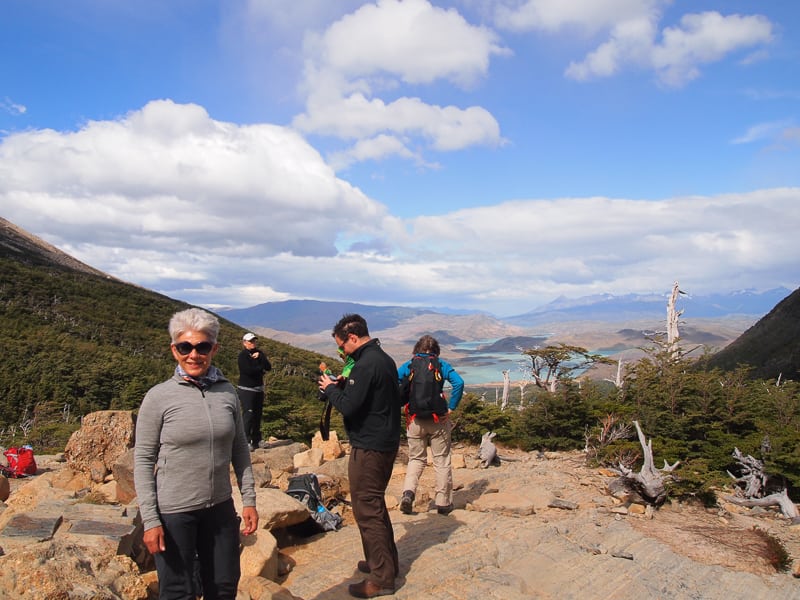 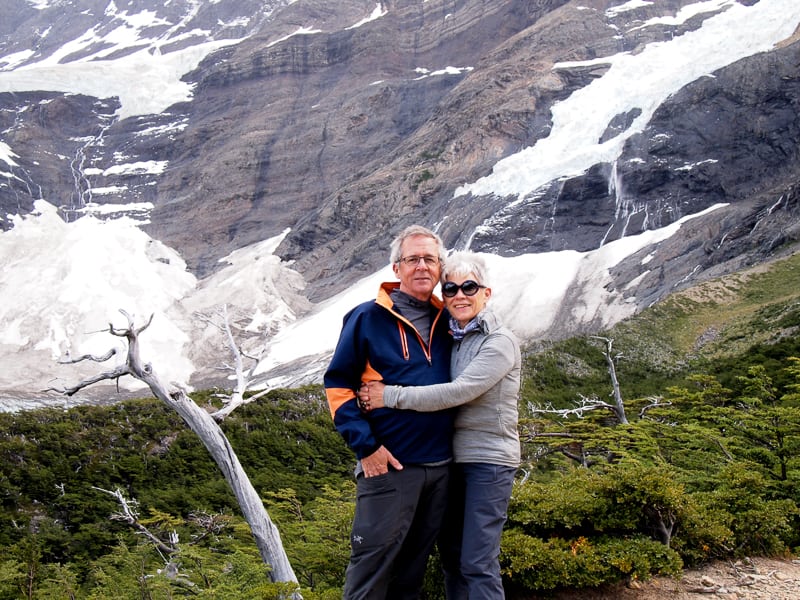 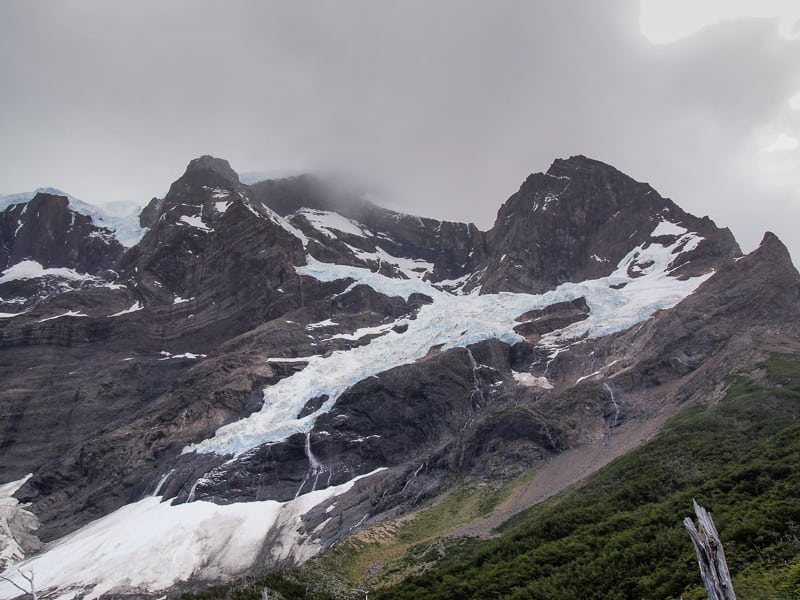 The weather turned nasty in a hurry beside Glacier Frances 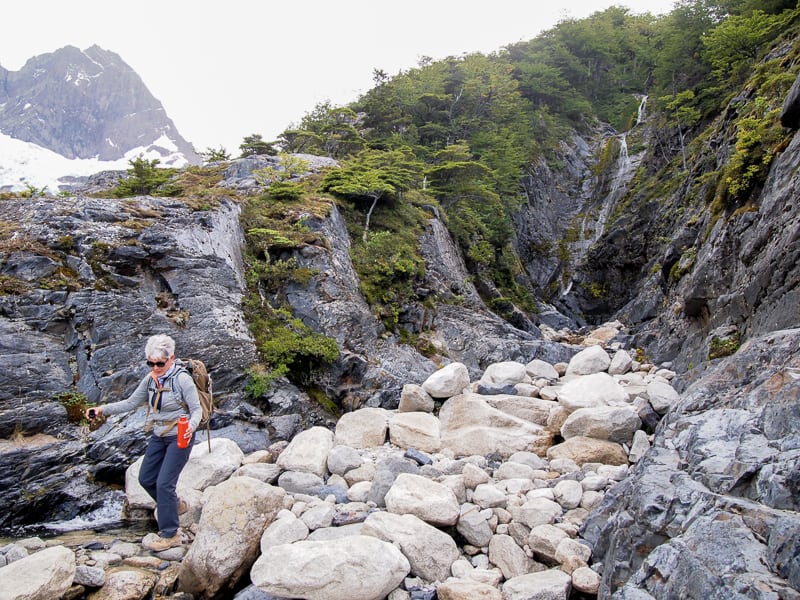 Filling a water bottle from a stream, just like we did in Banff in the 1970s

Our stay at the top was brief. The wind, like a Cuisinart beating the cold air around the glaciers with warmer mountain breezes, didn’t want to see us there. It blew light rain in our faces, grabbed Magellan’s hat and threatened to topple me over. “Look at my almighty power,” it boasted, forcing the waterfall to dance perpetually in the air like a whirling dervish, refusing its desire to touch down and join the river.

We saw what the wind was up to. “One more photo and we’re outta here,” said Magellan. Less than 15 minutes after we reached the top of the hike, we were on our way down the mountain, the wind at our back hurrying us along.

As far as we can tell, the upside-down waterfall doesn’t have a name. Any ideas? How about W-OMG Falls after the W Trek and W.O. Mitchell? Or Exuberant Falls to honour Antoine de Saint-Exupéry?

Nagoro’s Dolls of the Dead and Departed

Curves and Tension
Scroll to top