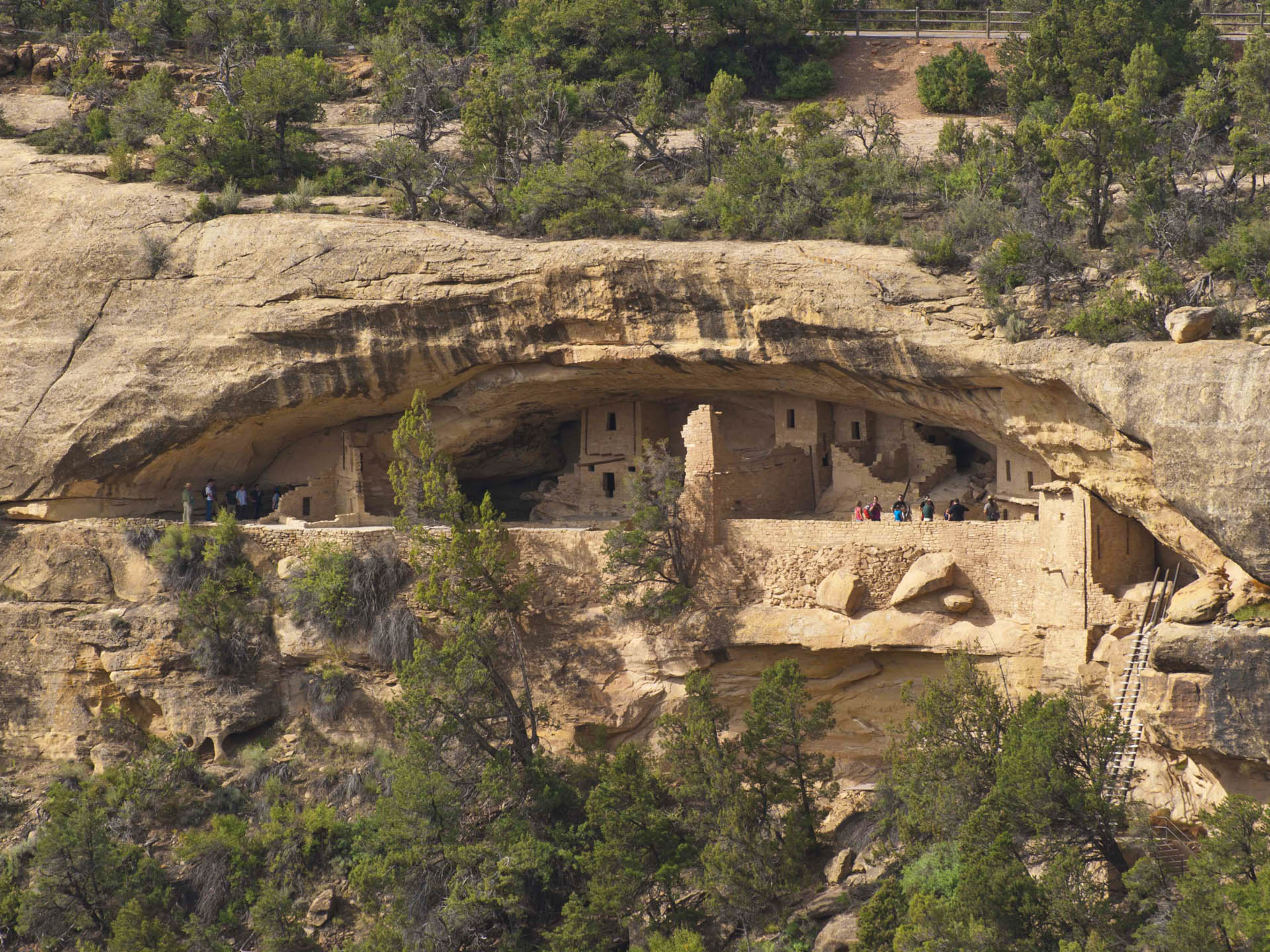 “People of conspicuous elegance” is how the Ancestral Pueblo people of Mesa Verde have been described. Rarefied living, 8,300 feet above sea level on the Colorado Plateau, their cliff dwellings were the largest in the Southwestern US—there were thirty-eight rooms and three plazas in the Balcony House that Magellan and I toured.

If Architectural Digest had existed in 1200 AD, Mesa Verde would have been cover material.

And a photo of the thirteen-foot-long necklace found in a kiva here would have appeared in Vogue’s August 1275 issue.

At its height, fifty thousand people lived in the area, far more than nowadays. But in the 1290s Mesa Verde came to a sudden and mysterious end. What happened?

Let’s go back in time a bit. The pit houses where the Basket people lived from 550 AD to 750 AD are the first signs of civilization here. Back then, this was a forested and fertile valley with water in the nineteen-mile long Navajo Canyon and plenty of seep springs in the mountains. (Today Mesa Verde receives eighteen inches of precipitation annually and is frost-free one hundred and fifty days of the year.)

The next style of home building was pueblos, followed by stone masonry. A lot of people began migrating to this well-watered and seasonable settlement, its cliff-tops a natural defense. Gradually, the area became deforested. In tree rings and elk horns, archeologists found evidence of a drought that occurred around 950 AD, as well as proof in trash middens that people were eating fewer large animals. Trouble was brewing.

Around 1290 a mass exodus occurred at Mesa Verde—everyone left, leaving six hundred empty dwellings and five thousand archeological sites. Was it because of the drought? Overpopulation? A confluence of migrants that led to social upheaval? A natural evolution of their nomadic lifestyle? Or something else?

In 1906 Mesa Verde was declared the first national park in the US. David Nighteagle, a Pine Ridge Lakota, lean and lanky with Willie Nelson braids, first visited Mesa Verde in 1964. He found the experience so compelling that he immediately decided to become a park ranger. David told us that Nighteagle probably means owl. For that and other reasons you’ll come to know, I call him Mr. Wise.

To reach the two-storey Balcony House, one of the few cliff dwellings still open to the public, you climb a thirty-two foot ladder and squiggle through a couple of short tunnels. Mr. Wise pointed out the stonework shaped to the size of bricks. The thickness of the outer walls. The arrow-straight juniper wood that formed the roof beams—Ancestral Pueblo people manually straightened trees when they were young so they’d grow into good construction timbers. He told us that to regulate the movement of residents and visitors, cliff dwellings were built with concentric layers of rooms and had us imagine how the interior plaster would have looked decorated with murals.

After climbing up the cliff aided by hand and toe rails notched into the stone, visitors entered through this tunnel—if this were 1290 AD Spice would be vulnerable from both sides

The Ancestral Pueblo people had a rigid system of lineage—matriarchal, and divided into two intermarrying groups like the Ravens and Eagles in Haida Gwaii. Here, each moiety kept its own customs, which is why many of the dwellings in Mesa Verde are divided into two wings.

Originally, the two side-by-side kivas were roofed and people entered through a hole in the roof

Each kiva in Balcony House has a keyhole shape, six pilasters, shelf-like banquettes around the interior, a firepit, a ventilator shaft and a sipapu connection to the underworld

Social and religious activities would have gone on in the two kivas, along with practical pursuits like drying berries, making sandals from yucca and weaving turkey-feather yarn into kilts, shirts and leggings patterned with intricate designs. Mr. Wise drew our attention to the sipapu, a small but deep hole in the kiva floor connecting the Ancient Pueblo people to the spirit world. He described the evidences of trade. Cacao was found in ceramic pots and more turquoise (33 rooms of it) than anywhere in New Mexico.

Across the valley from Balcony House, Cliff Palace, the largest cliff dwelling in the American Southwest, has 150 rooms and 24 kivas

And he shared cool tidbits. If you lived in these times and had six toes on one of your feet, you automatically ranked among the elite. You’d be a jubilado at the age of twenty-five, as the lifespan of the Ancient Pueblo people wasn’t much beyond thirty years. And no matter who you were or how long you lived, your teeth wouldn’t be so good. The sandstone metate used to grind corn gave off grains of sand that wore down your teeth. (Furthermore, because corn lacks two key amino acids, its consumption as a single staple of one’s diet alters the body’s chemistry, as Craig Childs writes in House of Rain, a book I was reading at the time. Keep this in mind as you read on.)

Throughout the tour, Mr. Wise encouraged questions. “I’ve heard there was a lot of violence and warfare here. Can you tell us about that?” a woman asked him. “I could but there are children under the age of twelve in this audience,” was Mr. Wise’s response. Followed by something like a line in House of Rain: “Wherever there are humans, there are atrocities.”

The boxy spiral represents the sipapu where Ancestral Pueblo people believe they emerged from the earth near the Grand Canyon, so some say the images on this panel on Petroglyph Point Trail tell the story of the Mountain Sheep Clan and Eagle Clan returning to their place of origin

We may never know why Mesa Verde was suddenly abandoned, its residents fleeing en masse south and east toward the Rio Grande and the Little Colorado River.

As history has shown, a willingness to address unspoken truths is limited to the few and the brave.

“House of Rain” writes Judith Lewis in The LA Times, “is a book that sets the reader’s imagination to work on a problem that has confounded generations of archeologists and probably will continue to do so for many years to come.”

Looking out from Balcony House, 264 feet long and 600 feet above the floor of Soda Canyon, we wondered what prompted its residents to suddenly flee Mesa Verde

Was it nomadic raiders from our part of the world who scared the residents of Mesa Verde into flight? A Navajo publication says that the Dineh’ from the Canadian Northwest Territories

like the Mongols, were raiders and spoilers. The mystery of the vanished Cliff-Dwellers is a mystery no longer when we know the nature of the warriors who came among them. The Zuñis told Cushing that twenty-two different tribes had been wiped out by the Enemy People, as they called them; and the walled-up doors of proud Pueblo Bonito (in Chaco Canyon, 140 miles south) testify mutely to the fears of its inhabitants.

Plus, Apache and Navajo tribal groups speak languages that the Athabaskan First Nations can readily understand. Yet, as Craig and others write, there’s little evidence of warfare at Mesa Verde. But…Craig also writes that

The archeological record from the thirteenth century around the Four Corners reads like a war crimes indictment: infants and children burned alive, skeletons marked by butchery, entire villages left with bodies unburied. Rock art depicts people bearing round decorated shields and using weapons on one another” and that kivas were burned “either in an act of ceremonial departure or as a ravage of war.”

So what was going on? In 1998 Douglas Preston in The New Yorker detailed the findings of anthropologist Christy Turner II of cannibalization at Mesa Verde.

And here’s the thing—Pueblo Indian myths support Turner’s cannibalism theories. Douglas writes that a Pueblo legend collected by the anthropologist John Gunn and published in 1916 describes a drought and famine in the past that reduced the people “to such an extremity that they killed and ate their children or weaker members of the tribe.”

An article in 2003 in The Smithsonian says two critical factors arose after 1150—climate change, and leaders at Mesa Verde creating an environment of socialization of fear among their own people.

There seem to have been goon squads. Things were not going well for the leaders, and the governing structure wanted to perpetuate itself by making an example of social outcasts; the leaders executed and even cannibalized them.

Remember what I said earlier about too much corn altering your body’s chemistry? Craig writes about a study by Michele Ernandes at the University of Palermo that examined the connections between neurobiology and sacrificial rites around the world, showing that

When corn is made into a sole staple, these deficiencies alter the body’s makeup…At its extreme this is clinically linked to obsessive-complusive disorder, aggression, and even mystical states of ecstasy…The authors of this study believe that corn could have been a factor, that dementia could have occurred on a cultural level.

But how was everyone fleeing to a new location going to help? The Smithsonian article says

Several archaeologists have argued that the pull was the Kachina Cult. Kachinas are not simply the dolls sold today to tourists in Pueblo gift shops. They are a pantheon of at least 400 deities who intercede with the gods to ensure rain and fertility. Even today, Puebloan life often revolves around Kachina beliefs, which promise protection and procreation.

Wisely, Mr. Wise did not want to get into this topic during our one-hour tour of the Balcony House.

You may recall from a previous blog how Mr. Wise made us all appreciate the majesty of Balcony House by having us close our eyes for a moment of silence. I imagined a family sitting on the balcony floor looking across to Soda Mountain on a sunlit morning like this in mid-April seven hundred and fifty years ago. Would their thoughts be like ours today, expressed in the insight of Alain de Botton?

It seems, in fact, that the more advanced a society is, the greater will be its interest in ruined things, for it will see in them a redemptively sobering reminder of the fragility of its own achievements.

Not only is he a gifted storyteller, Mr. Wise ends his tours by playing a wooden flute he’s hand-carved himself. Standing at the edge of Balcony House, he plays his song to the spirits, the music haunting as Mesa Verde itself.

Alain de Botton is the author of many essayistic books that have been translated in thirty countries and founder of The School of Life in London.

Childs, Craig. House of Rain: Tracking a Vanished Civilization Across the American Southwest. New York: Back Bay Books, 2008. We owe a big thank you to Russ Nordstrand of Backcountry Journeys for recommending this book. You may also want to explore Craig’s website.

You can find out more about David Nighteagle here.

Roberts, David. “Riddles of the Anasazi.” The Smithsonian. July, 2003.