The Bar O Curral in Talasnal, which Jorge and his wife have artfully decorated with reminders of the past

“It’s hidden under this vase,” said the young man, pulling out the house key. “A typical Portuguese hiding place,” he laughed.

“Good thing we’re sharing the house with a couple who got here before dark and know what’s going on,” said Magellan as we introduced ourselves to Gil and Sebastião.

Until we arrived in the abandoned village of Talasnal half an hour earlier and called Paulo, the house’s owner, (who lives 50 kilometres away) to find out where the key was, we didn’t know we’d be sharing the house. The news didn’t exactly excite me.

“Would you like a glass of white port?” I asked after we’d unpacked and come down to the living room where Gil and Sebastião were chatting.

And did we chat! Gil is in marketing, one of my former careers, and Sebastião is a marine engineer, a close cousin to Magellan’s chemical engineering background. Gil and  Sebastião shared the history of Talasnal that they’d heard from Paulo earlier that afternoon. That hippies and families from Coimbra abandoned the village years ago. That after the 2008 crash, young entrepreneurs began restoring homes to rent to tourists. That the permanent population is only 10 people. Travel, food, careers, we were so busy talking, it was almost 10 pm before we realized we’d better barbecue our turkey kebabs. “And we need to cook our pasta,” said Gil. 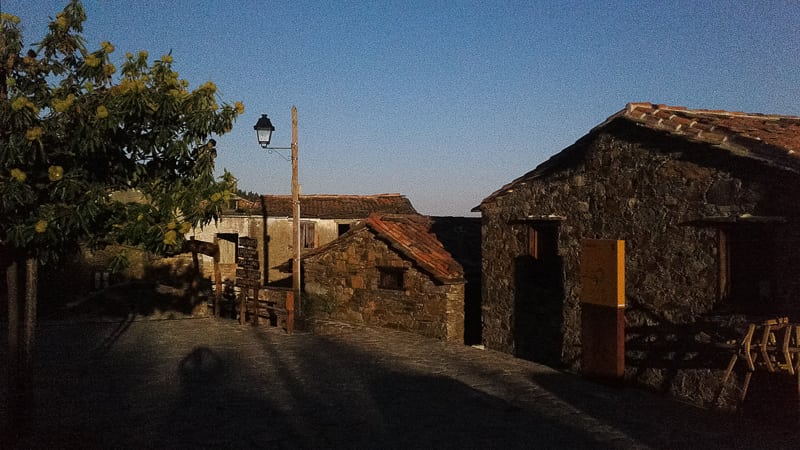 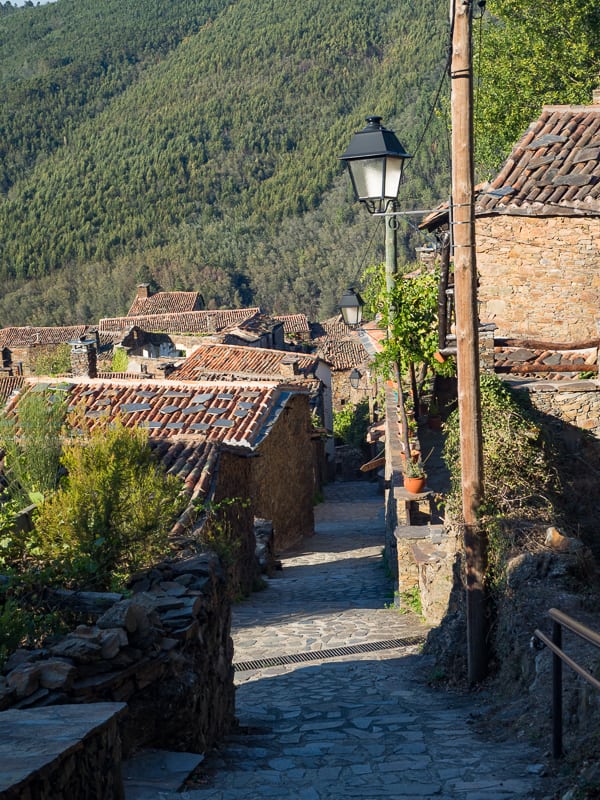 Schist Villages like Talasnal got their name from schist—the metamorphic stone that can easily be split to create a flat surface—that they used centuries ago to build secure, weatherproof houses 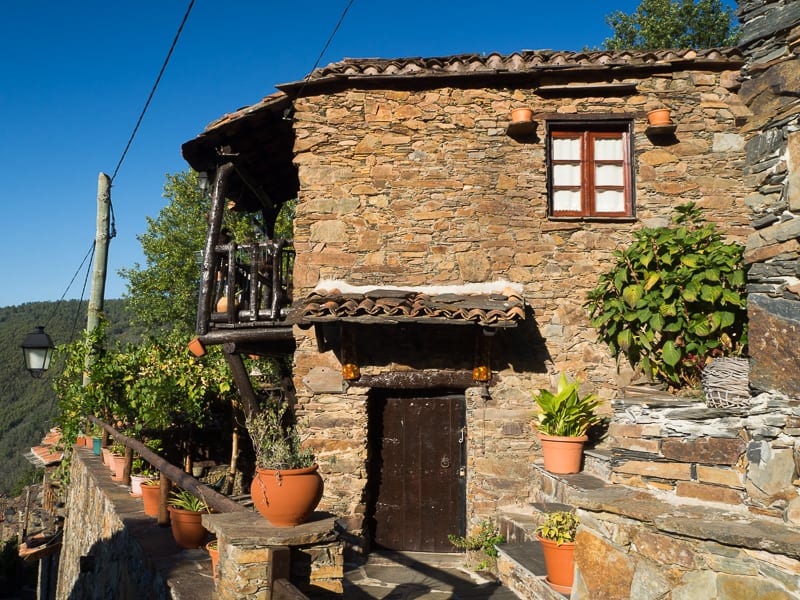 The house we shared with Gil and Sebastião 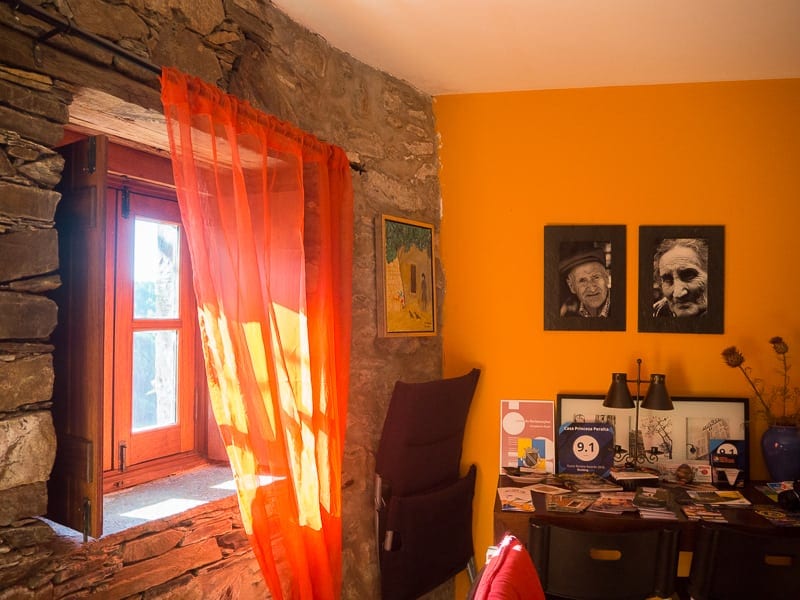 Paulo, the house's owner, honours the last two residents to live in Talasnal before it was abandoned 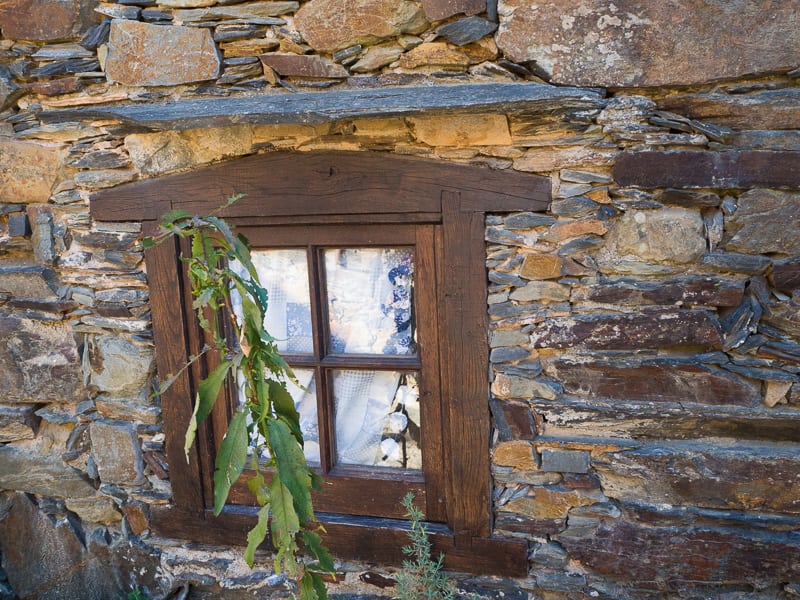 Paulo said that 20 years ago when he summered in Talasnal, his family would often go for a week without seeing anyone come through the village 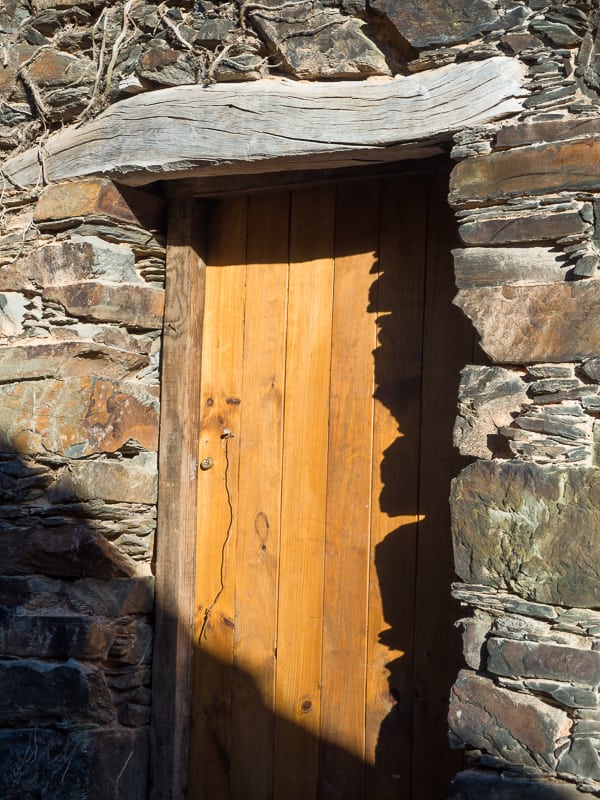 Until three or four years ago, the twisting mountain road to Talasnal was unpaved

“It’s full moon tonight,” said Sebastião, as we sat at the outdoor table finishing the last of dinner and pouring more wine. “And so quiet compared to Lisboa,” said Gil. We stopped to listen to the silence.

“Jeeze,” Gil exclaimed as she leaped up. “A fox. A fox, right at our table. She must be very hungry to venture so near to us.” Awestruck, we almost neglected to pull out cell phones and snap photos.

“What are the odds of seeing a fox this close?” I exclaimed. “I grew up on a farm on the edge of nowhere and never saw a fox there.”

Lying in bed in the room across the hall from our new friends, I felt so ashamed of my earlier thoughts, so lucky to be sharing a house with bright young people who were so mature and fun to be with, for the bond the night’s ethereal experience had created—visited by a fox, a raposa in Portuguese.

Being jubilados, we were up and hiking to Casal Novo much earlier than Gil and Sebastião. Later in the afternoon, the four of us decided we’d have a potluck dinner. Sebastião made a Portuguese tomato salad. Magellan barbecued pork ribs and sweet potatoes. “These are good. I can’t believe you only cooked them for four minutes,” said Gil about my green beans. Bottles of beer (engineers!) and wine were emptied as again, we talked late into the night. About marijuana laws in Portugal and Canada. Wealthy foreigners driving up house prices in Lisbon and Vancouver. Portuguese history, our questions clarified by Sebastião. Clients who clutter up Power Point presentations with lines of copy… And food. “I’m so sorry you’re not going to be here tomorrow night when the restaurant is open and we’ll eat cabrito,” Gil kept saying, as I recounted the times I’d had the delicious pleasure of eating baby goat.

“We’re so glad we’re sharing this house with you,” I said as we climbed the stairs to bed. “Sebastião and I said the same thing to each other last night,” laughed Gil.

Rising early again before the young ones were up, we didn’t get to say good-bye before we were on our way to Évora Saturday morning. “I’ll just leave them a note with our email address and let them know how much we enjoyed their company,” I said to Magellan.

“Is there anything going on this weekend that we should know about?” I asked the young lady at the hotel’s reception desk in Évora.

Although she said no, it was the 20th annual international workshop for Évora’s Cathedral Music School, and Belgium’s Capella Pratensis—with Peter Phillips, founder of the famous Tallis Scholars—was performing at 7 pm! What are the odds? 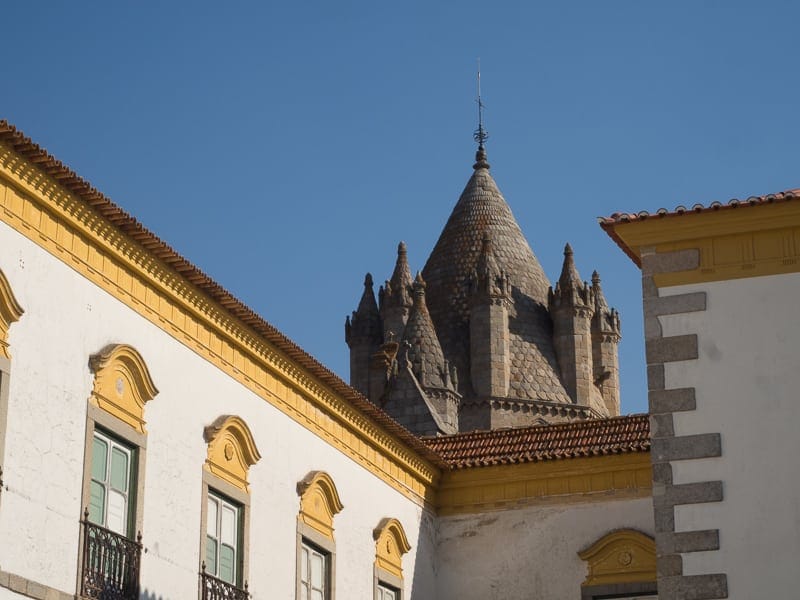 Évora, with its iconic white-and-mustard-yellow buildings, is a stunning little city to visit 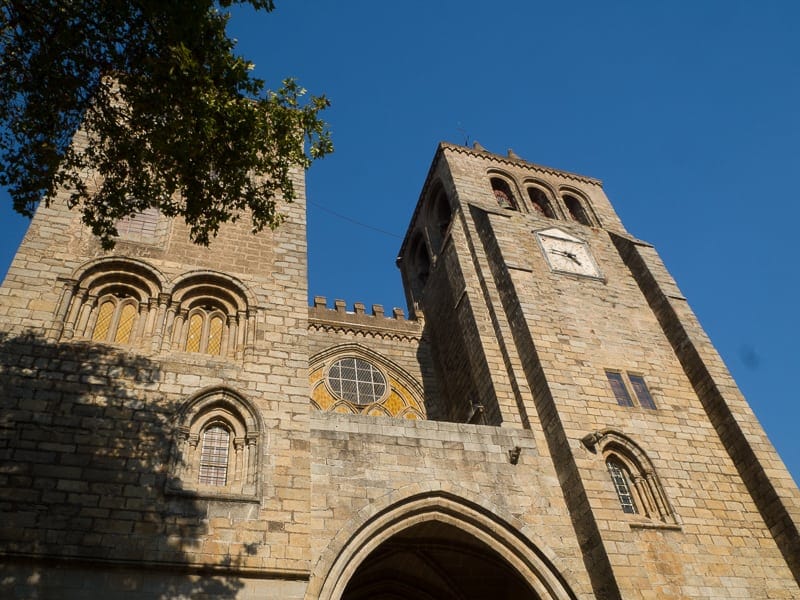 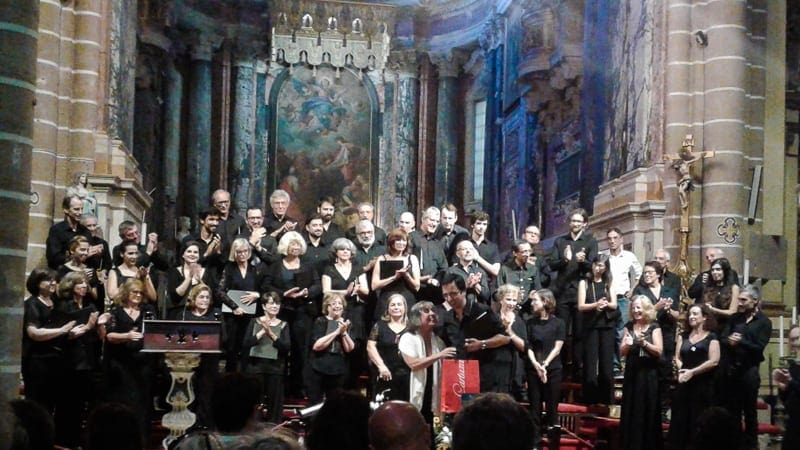 Évora Cathedral, the Eborae Music Poliphonic Choir in the Final Concert of the XX Jornadas Internacionais

Late Sunday afternoon we returned to Évora’s Cathedral for the final concert featuring a group of about forty professional and amateur singers from around the world who had participated in the workshop.

With our holiday drawing to a close, we had that Sunday-night feeling: excited for the few days ahead in Lisbon, sad that our travel surprises, like the Talasnal experience and the Évora concerts, would soon be over.

“I’ve seen you twice before,” I said to the blonde woman. “Today near the Santiago de Alfama Hotel when we were having lunch outside and Sunday night at Évora—you were part of the choral performance.”

Another high-spirited discussion began of “What are the odds of this happening?” All three of them are amateur singers who travel to events like Évora’s workshop. Furthermore, the petite Swedish woman beside me had spent six months in Vancouver. “You’re a physicist, what are the odds of seeing you here—one in eight million?” I asked. “I suppose it would be something like that,” she said. 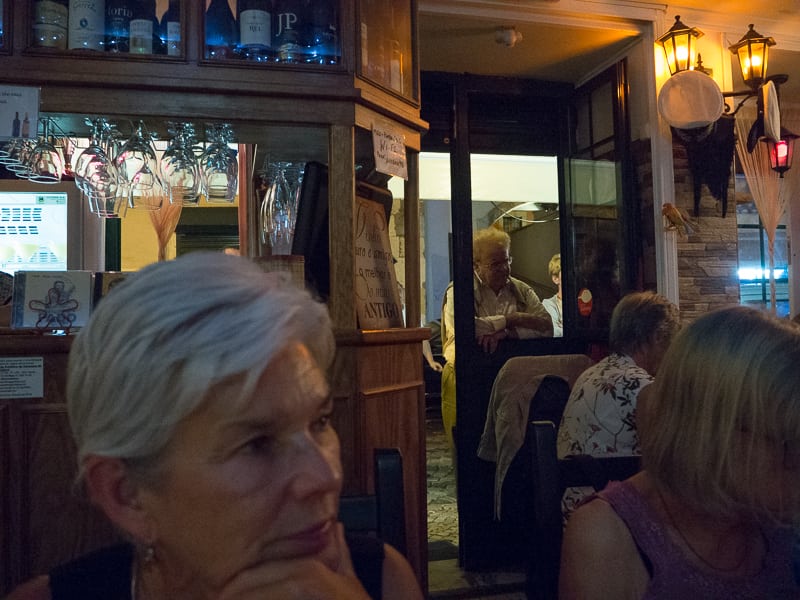 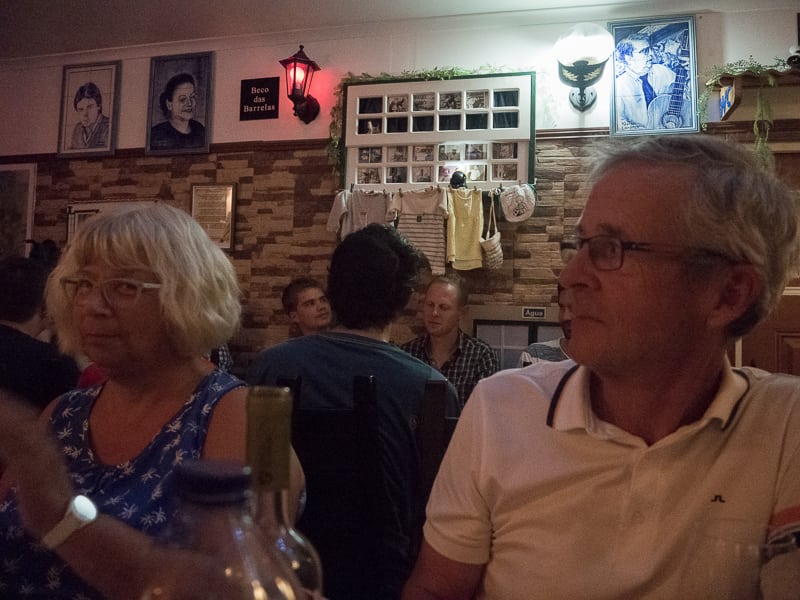 The three who had participated in the Evora Workshop, like the own beside Magellan, didn't get up and sing fado 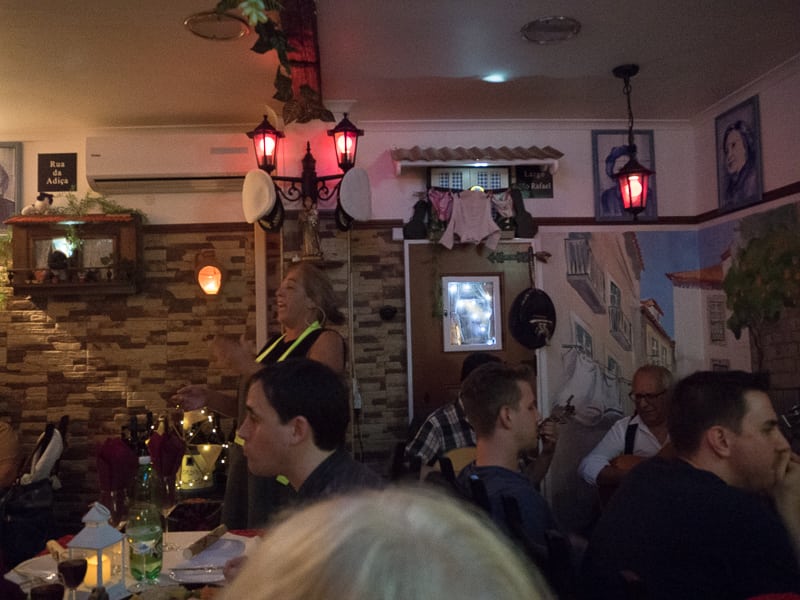 The restaurant was decorated with small clotheslines of babies' wear

We weren’t quite ready to return to call it a night. A fado club I’d wanted to go to was full, so we decided to walk the long way home and enjoy Lisbon’s warm night air. “I love this city with its 3,000 hours of sunshine a year, that tile museum, the art galleries, the great seafood and the reasonable prices for everything. And these chunky, white cobblestone streets,” I said looking down.

“Jeeze. I don’t believe it!” said a woman’s voice I recognized instantly.

“Gil! Oh my gawd. What are the odds of seeing you here?” I practically shrieked.

Gil e Sebastião (not in Talasnal, in Budapest) 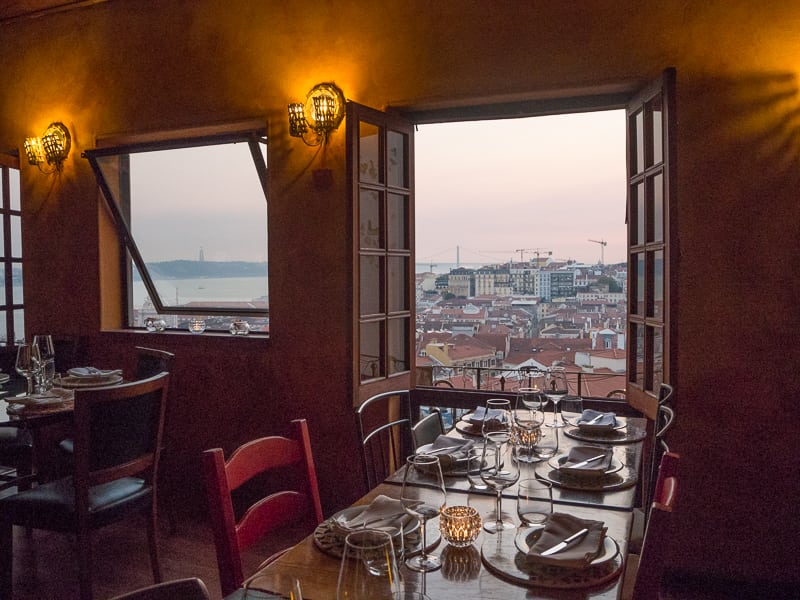 In many cultures it’s believed that sighting a fox means good luck, that a fox, with its focused energy, can serve as a catalyst to point you in a clearer direction. All I can say is that in Lisbon, a city of two million people, we were lucky to say proper good-byes to Gil and Sebastião over dinner the next night. And if the luck of the fox is with us, we’ll see them again someday.

The tagline at Paulo’s Casa Princesa Peralta that we shared with Gil and Sebastião is Our house is located where the time stop and the nature is Princess. 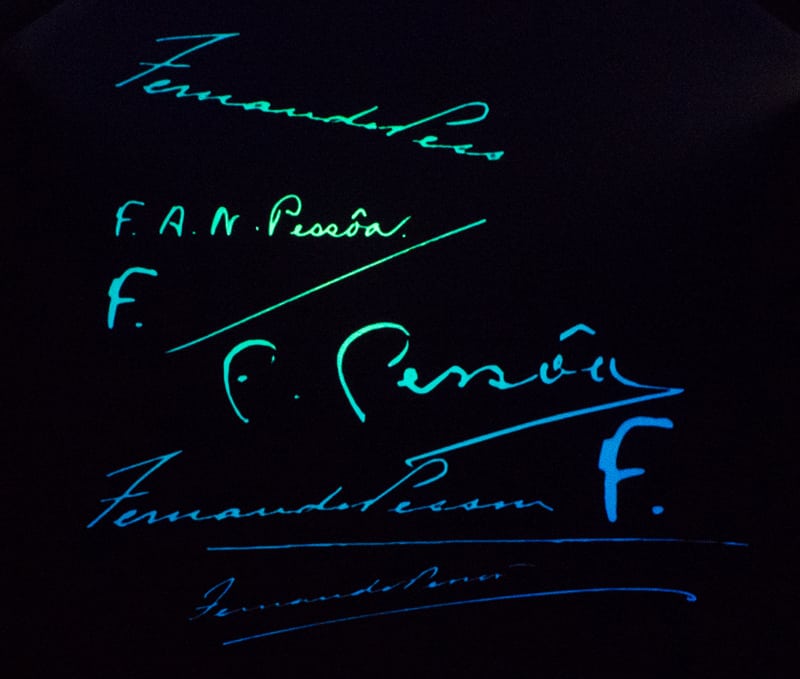 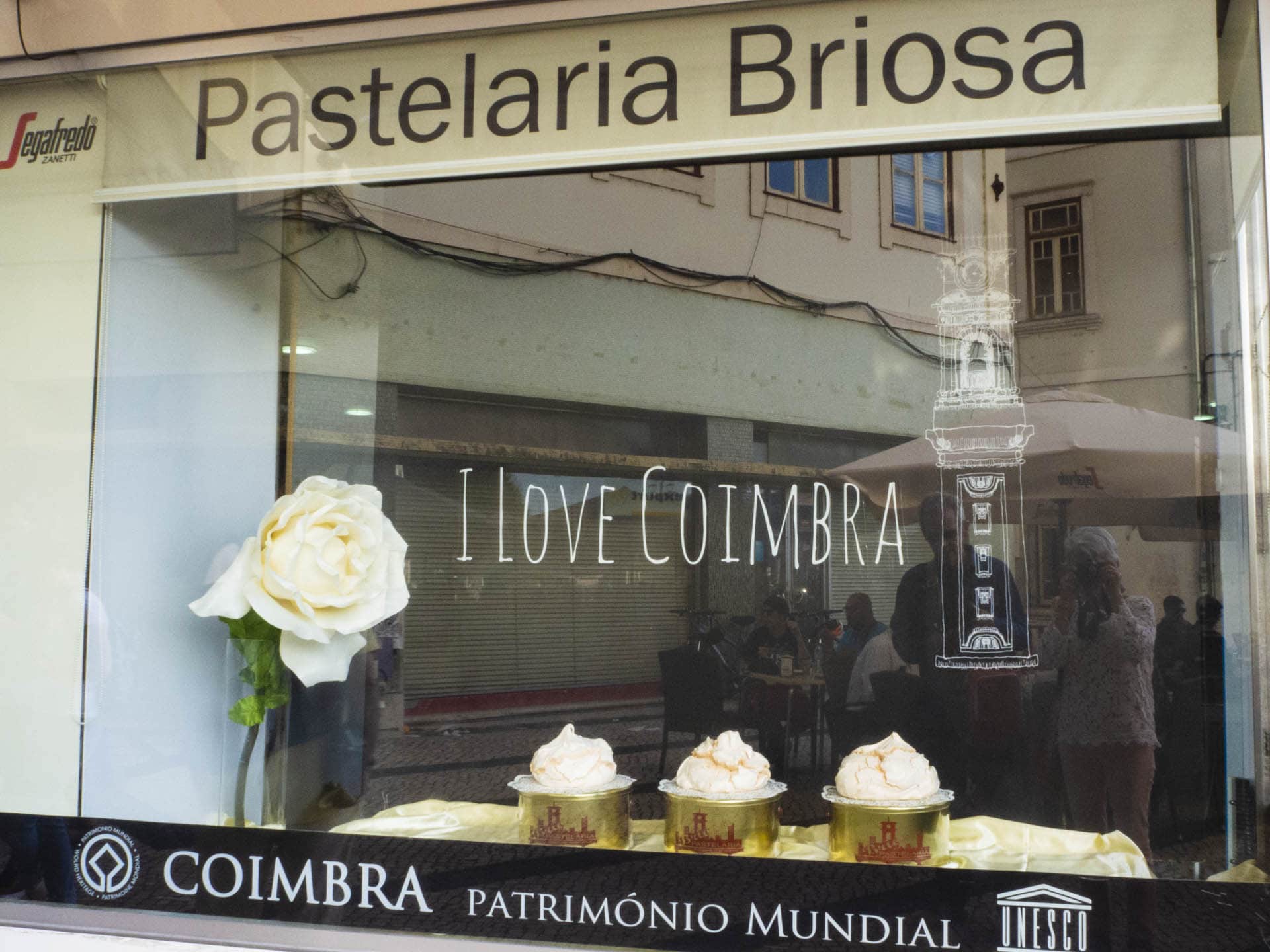 Can You Go Back?
Scroll to top