Starting out as just a waypoint for us between Portugal and the Picos de Europa, the Spanish city of León turned into a highly recommendable destination—as those of you who have hiked the Camino de Santiago already know. León has the energy of a university town, one of the most stunning cathedrals in Spain and Casa Botines, one of architect Antonio Gaudí’s earliest designs: the city’s prize attraction for me.Casa Botines means shoes in Spanish. But you won’t find a pair of Birkenstocks, Jimmy Choos or Vetements here. Gaudí designed Casa Botines as a textile and fabrics warehouse for Simón Fernández and Mariano Andrés, owners of a company that bought fabrics from Gaudí’s friend and patron, Eusebi Güell. Simón and Mariano named the building after the former owner of their company, Joan Homs i Botinàs. 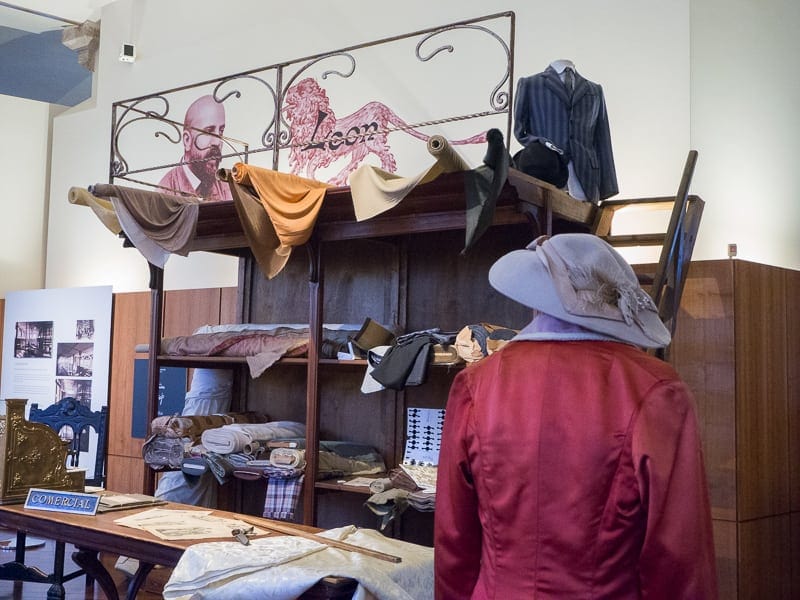 Started in 1891, it took less than a year to complete, perhaps because Gaudí always used the same Catalonian work team, craftsmen who could fabricate a complex trapezoidal-shaped wooden structure. What’s truly remarkable are the cast-iron columns Gaudí used—for the first time in the world in a frame structure—to create an open-plan concept on the ground floor without the need for load-bearing walls, like we see in department stores today. Gaudí was a man for the people. Can you believe he designed the lower level, where mostly women sorted bolts of fabric, to be full of daylight to make their work easier and the space more cheerful?

An open staircase, a common element in Gaudi's designs to increase the natural light and ventilation

An elaborate peephole to check who's knocking

A built-in block to hold a window open

A custom hinge by Gaudi

A magnificent building, it became a museum only a few months before we arrived in León. Magellan and I signed up for a tour in English, which proved to be delightful and informative, and gave us an hour beforehand to wander around on our own. That’s when we discovered Goya’s Los Caprichos exhibition in the basement.

It was in 1792, one hundred years before you could buy a bolt of silk at Casa Botines, that one of Spain’s most important artists—Francisco de Goya, at the time Court Painter of Carlos IV and Maria Luisa—totally changed his style and approach. That year, after a failed romance, Goya contacted an undiagnosed illness (syphilis? polio? menières’s disease? lead poisoning?) that caused him to go deaf. Goya’s art turned from rococo portraits of the Spanish aristocracy to the darker reality, the grim everyday life of the poor, the insane, prostitutes, prisoners, even witches. He began to create art that addressed, in a disguised manner, the “abuses by the Roman Catholic Church, societal ills from pedophilia to prostitution, and rampant superstition in an age of revolution and terror.” Art for a moral purpose, as he himself stated, to criticize “the innumerable foibles and follies to be found in any civilized society, the common prejudices and deceitful practices which custom, ignorance and self interest have made usual.”

Los Caprichos or The Caprices are an absorbing set of 80 etchings and aquatints published as an album in 1799 but withdrawn, probably because of the Inquisition. In a letter a few years before Goya wrote “I don’t fear witches, hobgoblins, ghosts, giants, rogue sand liars or any kind body except human ones.” The Caprices are disturbing, grotesque and nightmarish, full of creatures with a driving animalism for exploitation and self-satisfaction, although I also found some of them to be quite humorous. As the art critic Robert Hughes writes, “Goya’s peculiar slant, which lends a special power to his work, is that he will not accept the familiar scheme of goodies and baddies, exploiters and unknowing victims. To him all of Madrid society is linked in a series of agreements or, to put it more bluntly, deals. I grab from you; you grab from me; each of us loses and each gets something.”

I’m surprised in looking at our photos of Los Caprichos, that we have so few. Perhaps it’s because we spent a lot of time on the main floor of Casa Botines before Maria’s tour and by the time she finished, the museum was about to close. Or maybe I was too absorbed in the details of these amazing works—in the moment and not thinking of sharing the experience with you in this blog.

It’s Nicely Stretched Plate 17 Goya’s commentary: “Oh! The bawdy old woman is no fool. She knows quite well what is wanted and that the stockings must fit tightly.”

No one has seen us Plate 79
The clergy when no one sees them
(Photo: Glasgow University Library)

Los Caprichos wasn’t a financial success when it was first published; only 27 of the 240 albums were sold. As you’d expect, someone reported the artist to the Spanish Inquisitors. Goya quickly withdrew the plates and all of the unsold albums but luckily, a few years later Los Caprichos was donated to the Royal Calcografia in return for a pension for his son.

In writing this, I wondered about famous Spaniards from 1992, a hundred years after Casa Botines, two hundred years after Goya’s artistic turnabout. A famous Spaniard that our great grandchildren will be talking about. Will it be Ferran Adrià, considered the world’s best chef of the last century and recipient of Spain’s National Gastronomy Award for Best Chef de Cuisine in 1992? Or Javier Marías who published Corazón tan blanco (A Heart So White) in 1992 and has been given 10:1 odds to receive the Nobel Prize for Literature this year? (It’s excellent, but a later novel, The Infatuations, is unputdownable.) Or will it be graffiti artist Sam3 whose works adorn walls around the world and, in Arte Español Contemporaneo 1992-2013, was named one of Spain’s most important contemporary artists? Or Santiago Calatrava, the architect who designed The Montjuic Communications Tower and Kuwait Pavilion for the Barcelona Olympics in 1992? What a country!

UPDATE, OCTOBER 14, 2020: Peter Schjeldahl in The New Yorker (September 21, 2020) has an excellent article about Goya’s “burlesques of donkey-headed professionals, superstitious peasantry, female and male poseurs, hypocritical clerics, and fools, who, perhaps because so lost in delusion, verge on transmogrifying out of human form.”

“Don’t run into the kitchen, it’s a head with eyes fixed on the stars”

Still Life in “The Heart of the Death Coast”
9 replies

Hike #1 to Tudes: Leave Your Lunch at Home
Scroll to top