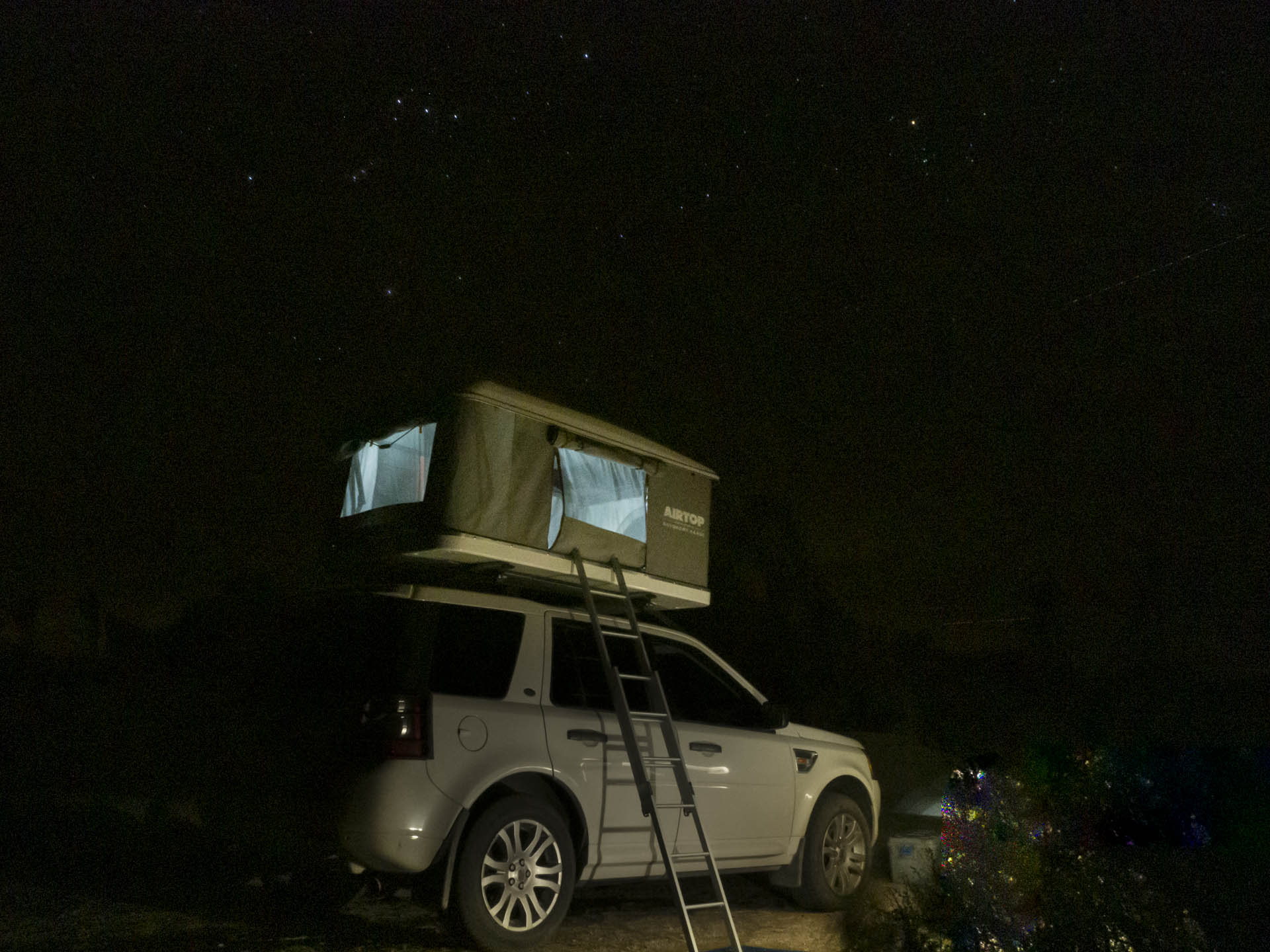 Just us and the stars

Backpacking, car camping, RVing or motelling? Why did we choose a rooftop tent as our base to explore North America?

Last summer while both of us were (and still are) younger than our “best-before dates,” we decided it was time to hike and explore the many beautiful areas close to home. Our dream hikes included unspoiled wilderness and trails inaccessible in our Infiniti sedan.

Our first challenge was to choose an SUV. It needed to have some serious off-road capability but at the same time be comfortable as our only vehicle. A used 2008 Land Rover LR2 fit the bill. The LR2 is an interesting paradox in the compact luxury segment. As most owners would never have taken theirs off-road, even though LRs are loaded with off-road features, those “Princess Rovers” are an excellent buy in the used market as dual-purpose vehicles.

Although it lacks low-range, here’s what Guide Auto Web says about it:

What makes the Land Rover LR2 a legitimate trail weapon is the pairing of its all-wheel drive feature with the Terrain Response system.  Terrain Response is a full suite of off-road electronics that link the transmission, engine, traction control, stability control, and the vehicle’s center coupling in order to appropriately tackle the surface that the Land Rover is facing.  Terrain Response allows the driver to choose between Grass/Gravel/Snow, Mud and Ruts, and Sand settings (on top of its General Driving setting), via a simple console-mounted button.  It also automatically engages hill descent control when more rugged options like Mud and Ruts are selected.

The LR2’s off-road prowess shines in manoeuvrability with a short wheelbase and limited overhangs giving aggressive angles of ascent and descent. It has a reasonable 8.5 inches of ground clearance and almost 20 inches of water-wading depth.

On our recent trip, our LR2 performed well. It carved through blown sand that covered 4WD roads in southeastern Death Valley and crawled four kilometres up a boulder-strewn wash to access the Upper Muley Twist trailhead in Capital Reef National Park. Being a used vehicle, the need to avoid a little boulder and bush rash on the side panels wasn’t an excuse to abort a trail. 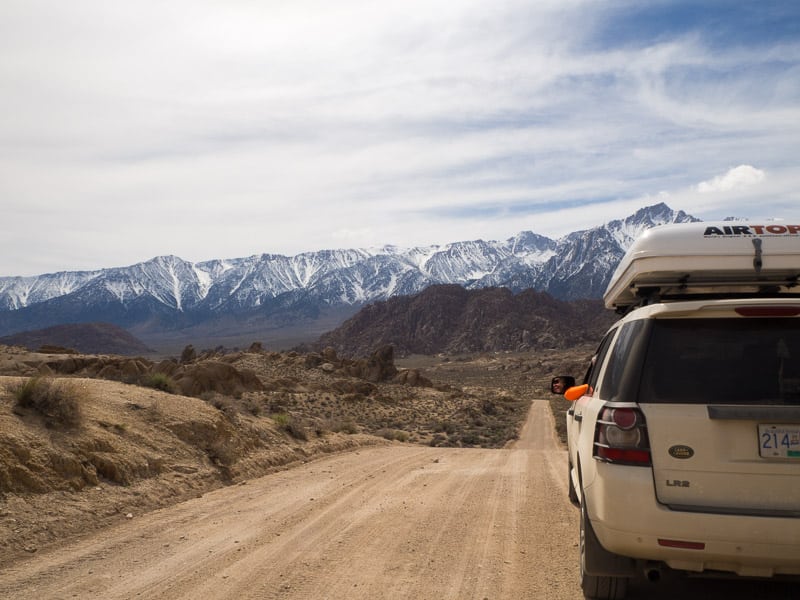 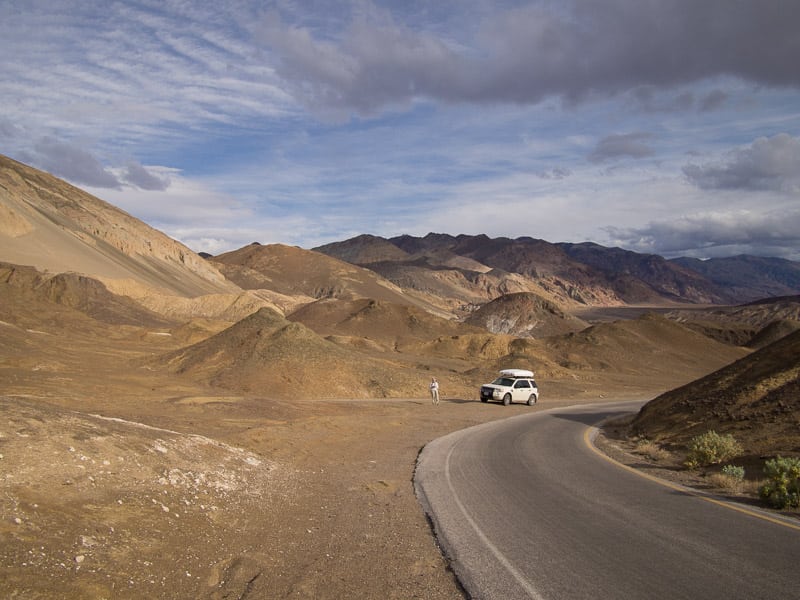 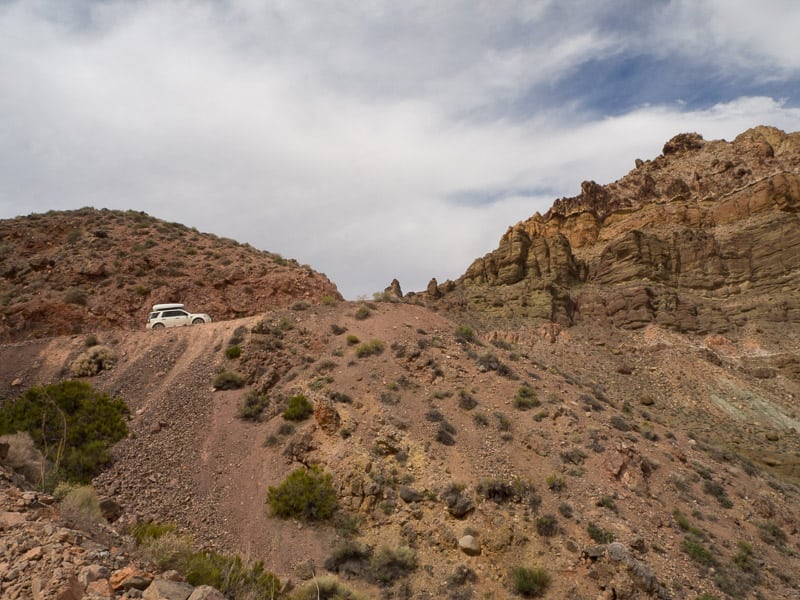 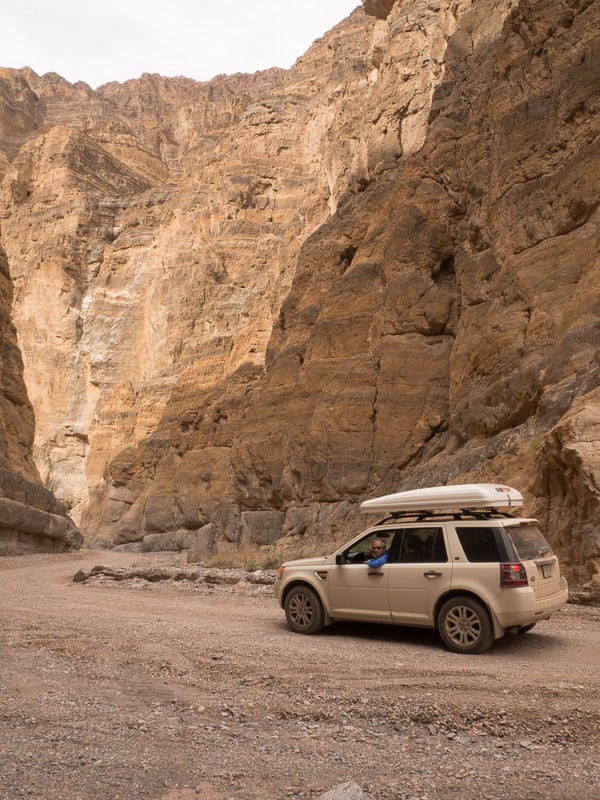 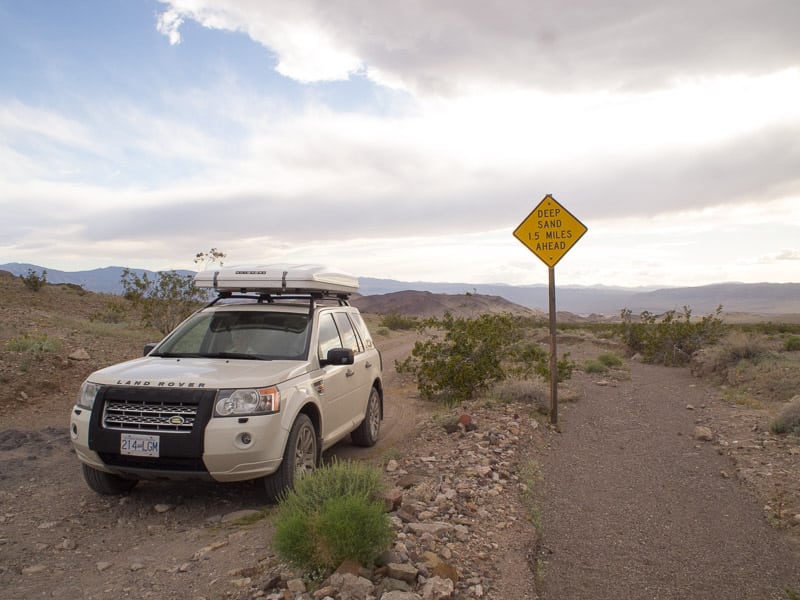 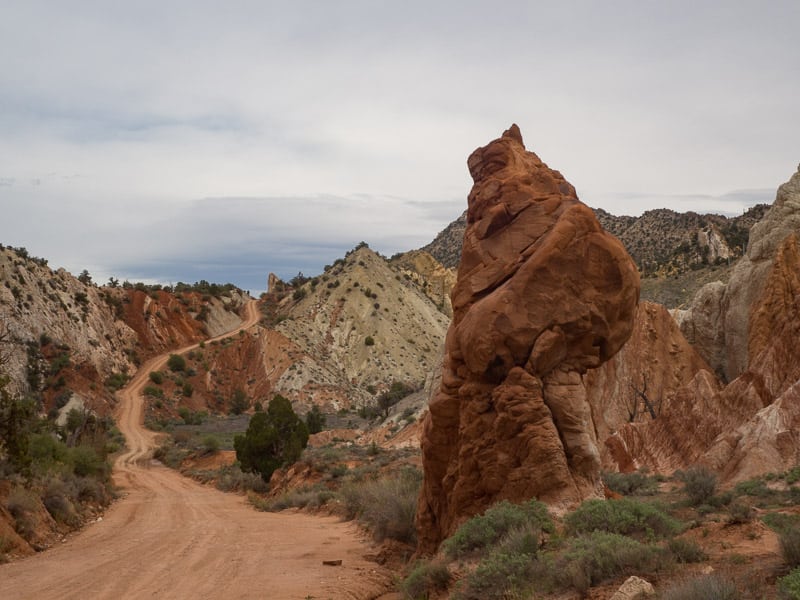 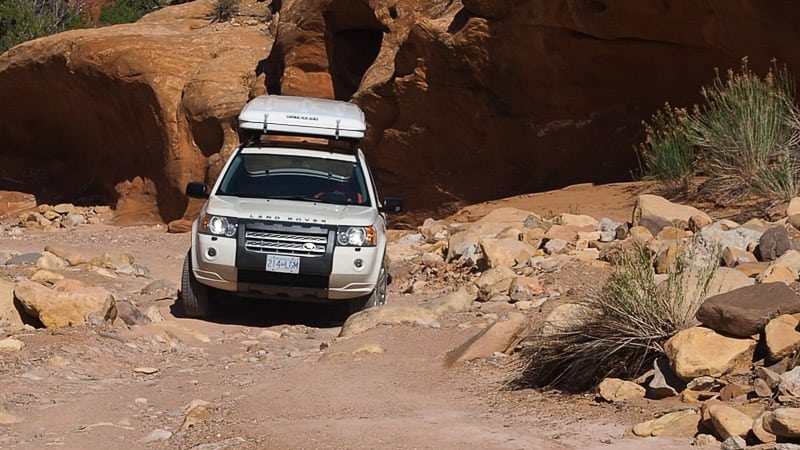 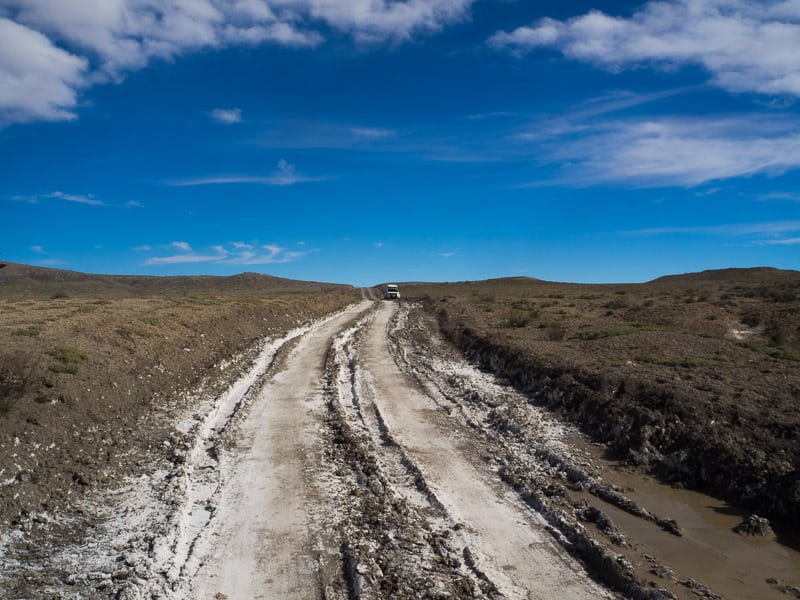 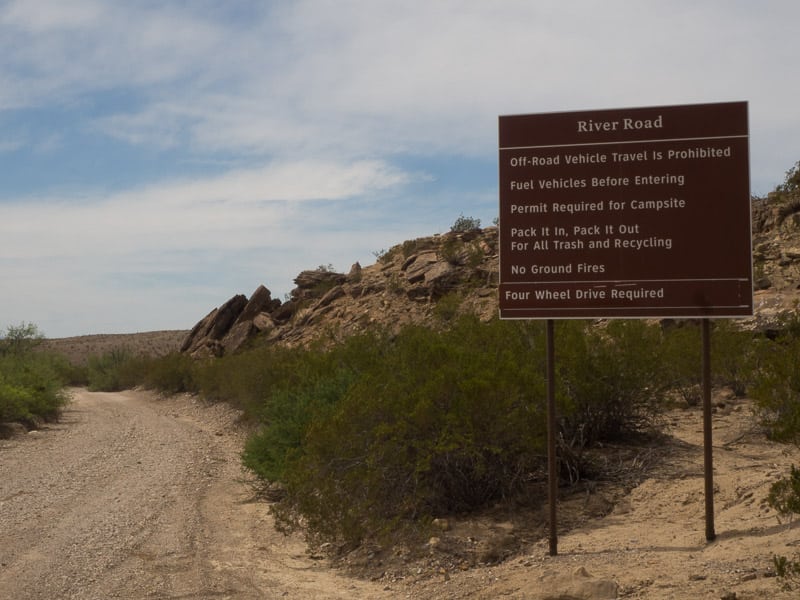 Following the Rio Grande for 82 km, the River Road in Big Bend NP Texas can be challenging

Our second challenge was to mate “Rove” with an “Inn.” In Oman in 2014, we rented a Land Cruiser with a Hannibal rooftop tent. We loved it. It was comfortable, and being off the ground, caught breezes for natural ventilation. We were above the food chain and away from creatures not familiar to us, like camel spiders and scorpions. (In the southwestern US, we were above the javelinas, snakes, mice and possums.)

There are two main styles of rooftop tents. The first is like a fabric tent mounted on a folding platform on a roof rack. The tent assembles itself like a pop-up card as the hinged platform is swung open. A ladder provides support to the cantilevered section. The second style has a hard exterior shell like a large cargo box. It’s more aerodynamic than the first style and better protected from the weather when travelling. Some raise with gas struts, others with hand cranks.

We chose a hard shell Airtop with gas struts. After unlatching three safety hooks, the tent pops up instantly and the sleeping quarters are ready. Bedding is stored in-place—a fitted sheet on a foam mattress, a feather duvet and a Hudson Bay/Pendleton wool blanket for cold nights. It’s made by the Italian specialist, Autohome, a company that’s been designing rooftop tents for more than 60 years.

Rooftop tents eliminate the late-afternoon ritual of hunting for prime tenting real estate. There is far less concern if the ground is wet or rain is forecast. With a rooftop tent, all you really require is a level place to park and within minutes, your sleeping quarters are ready.

Once tucked away in a quality rooftop tent, it’s hard not to feel safe, protected from the elements and cradled in comfort. With one exception. Our shell is only rated for medium-strength winds, approximately 30 mph. Above that, you can’t sleep as you become increasingly concerned about its structural integrity. So if winds were forecast, we tried our best to hide behind outcrops or natural wind breaks like clumps of trees. If that wasn’t possible, we headed for cover in a nearby motel. 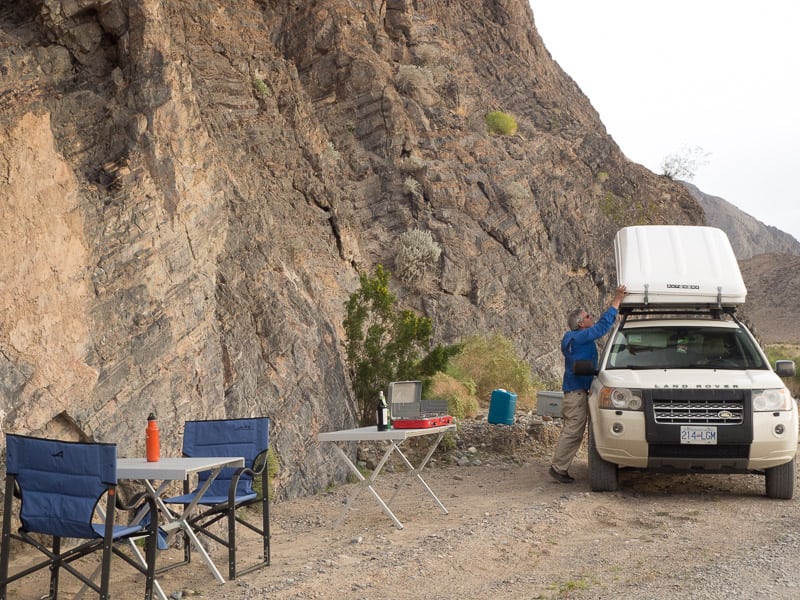 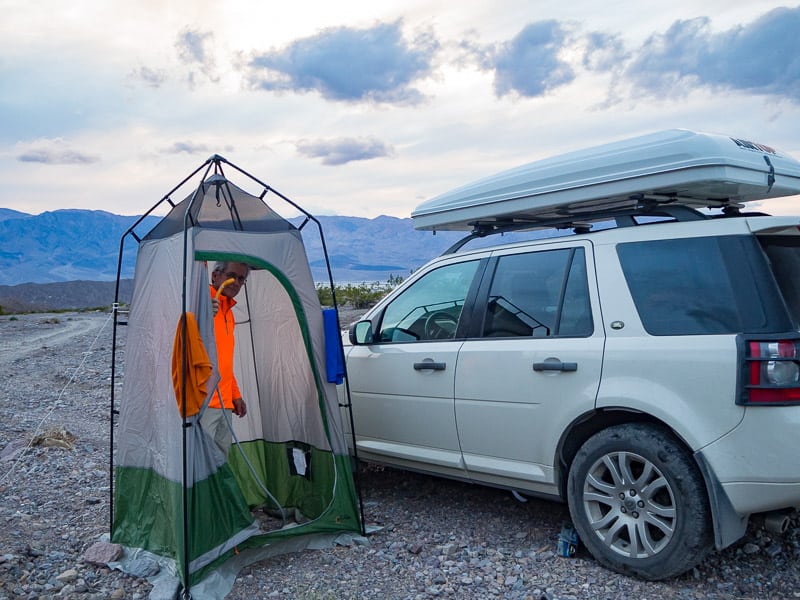 We loved our shower tent after long hikes 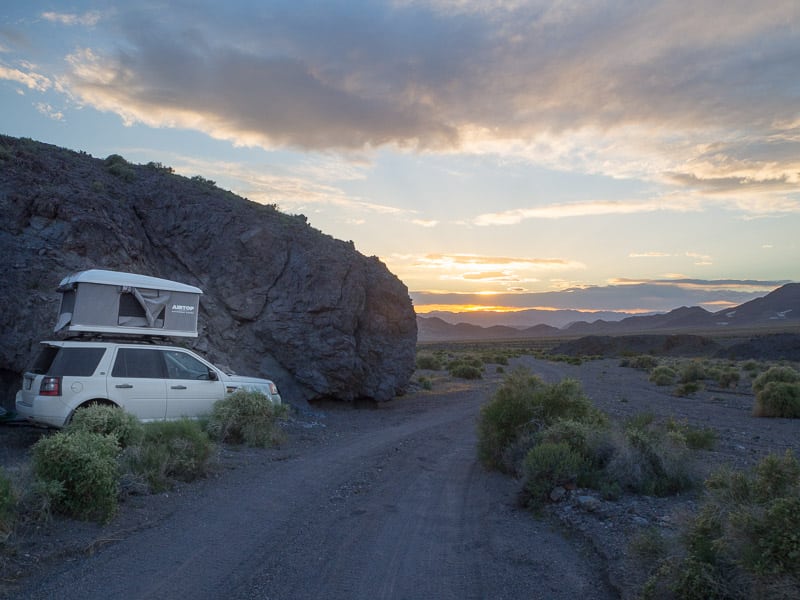 Tucked beside an outcrop to get out of the wind in Ibex Dunes, Death Valley 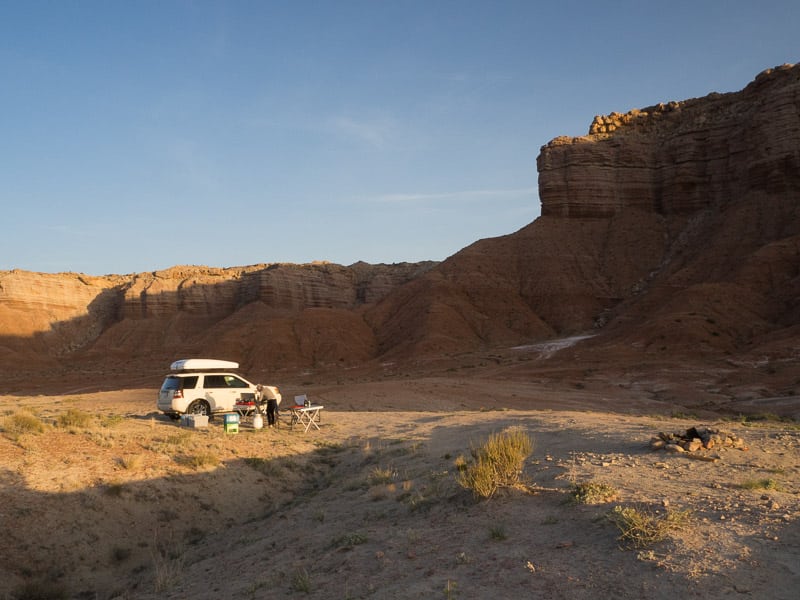 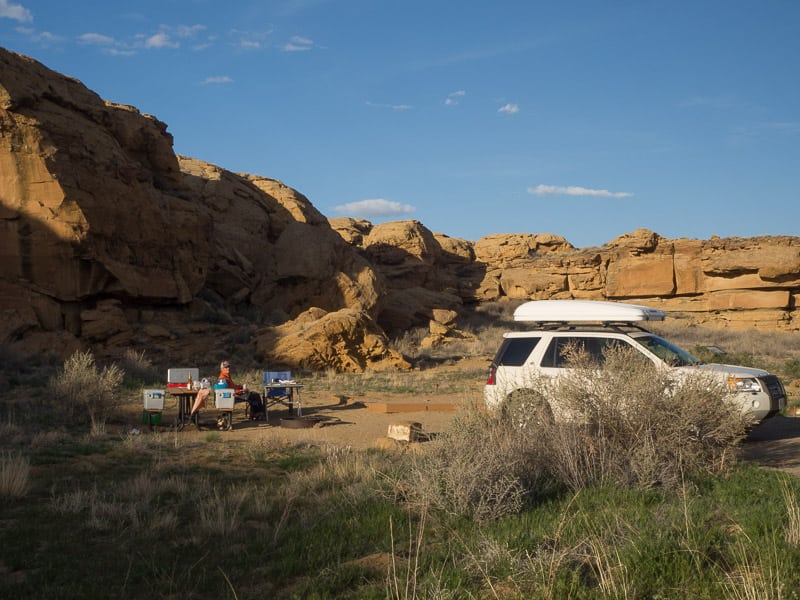 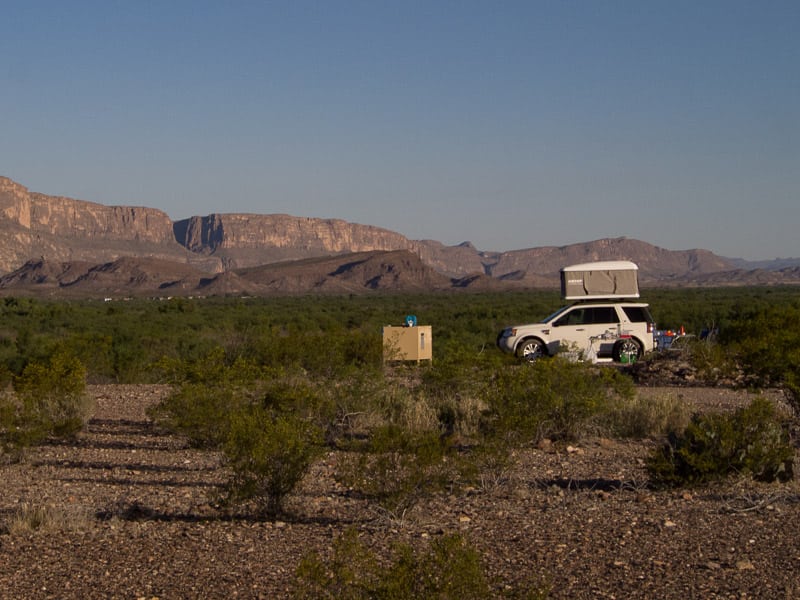 In Big Bend NP, Buenos Aires primitive camp spot, 100 metres from the Mexican border (the metal box at every primitive campsite in Big Bend is to protect your food from bears and javelinas) 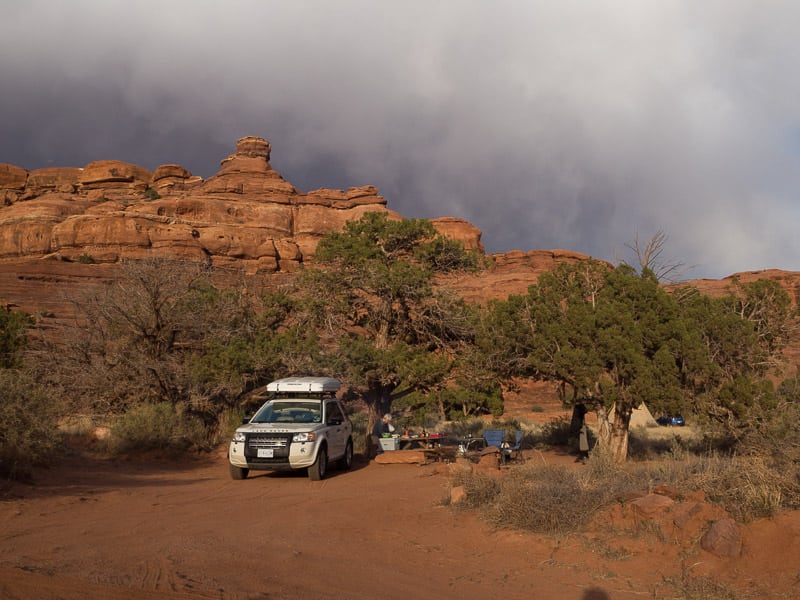 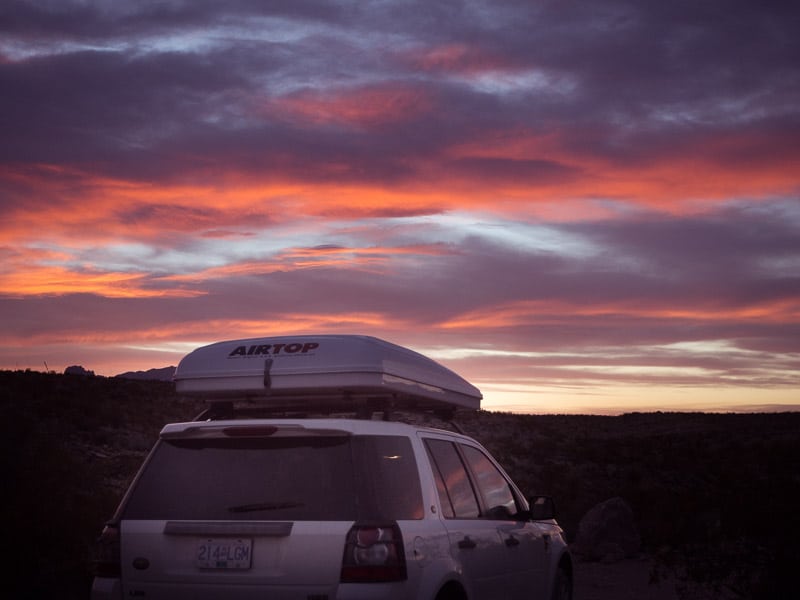 Sunset in Big Bend NP at Candelilla where we were "boondocking," an American name for primitive camping

On our recent 79-day road trip, we planned to average one night in four in a motel to wash clothes, have a bath or go to a nearby restaurant. In reality, we spent a third of the nights in a motel or with friends. Of the 55 nights in Rove-Inn, at least half were in primitive camp spots near trailheads with minimal or no facilities, not even tables.

Rove-Inn, because she’s fairly unique, attracted a lot of attention, mostly from jubilados like Leslie and Glenn from Colorado Springs facing the same decision we had a year ago. Most people had the same questions. “Does it come in a bigger size?” (Yes.) “Is it easy to put up?” And the women all asked Spice, “What’s it like climbing down that ladder at night?” (She assured them how easy it is and recommended keeping a sweater and pull-on booties in the overhead mesh rack for night-time forays down the ladder. We also take our headlamps, Garmin, cell phone, car keys and a thermometer “upstairs.”)

We’re already looking forward to our next trips, focusing on British Columbia and possibly a return to the eastern Sierra Nevadas in California to see the fall colours. 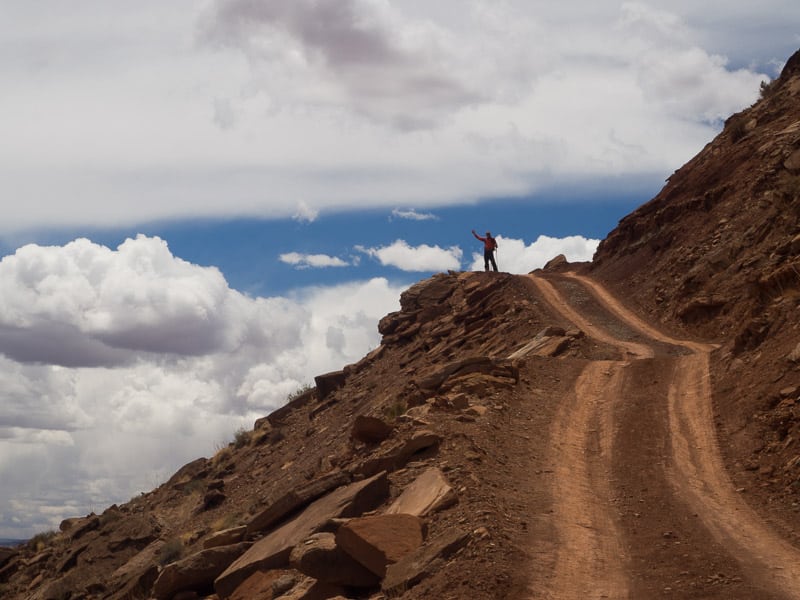 We had a reservation to camp on the White Rim Trail in Canyonlands NP, but the west end was closed because of the Green River flooding so we walked a portion instead 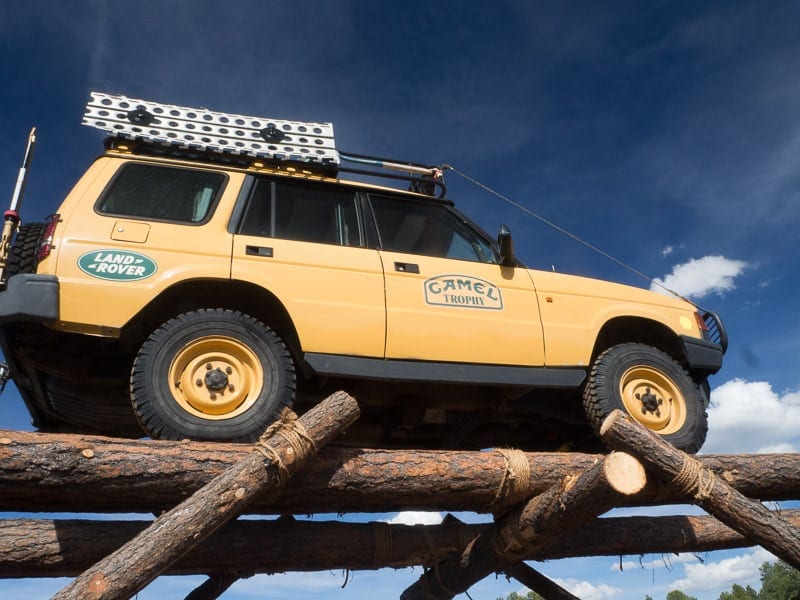 Autohome, the one we chose,  is one of many rooftop-tent manufacturers. 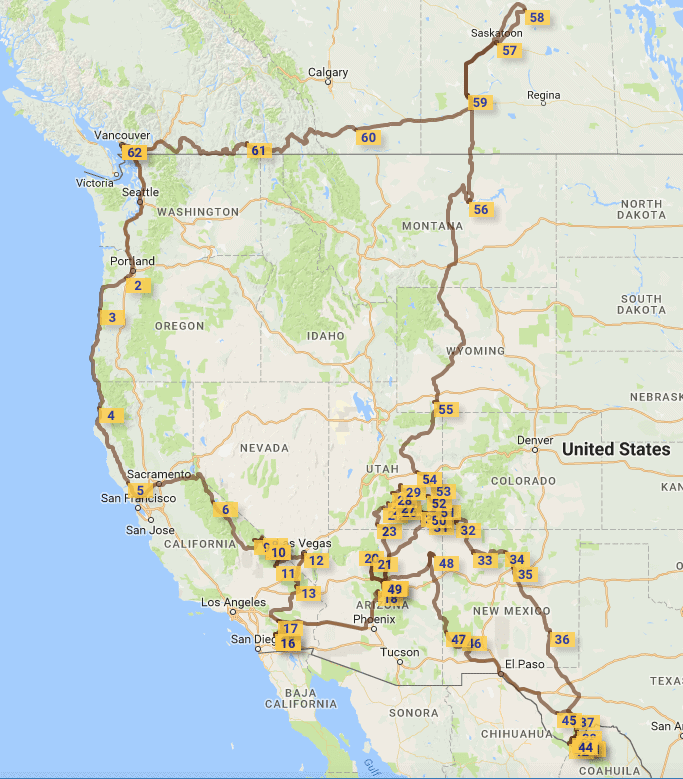 In our 79-day trip, we stayed at 62 different places and loved our home-on-wheels. Guess which state was our favourite?

Finding What You’re Looking For

A Natural Souvenir from Bhutan
Scroll to top