“For how long will you continue to listen to those dark shouters,
caution and prudence?
Fall in! Fall in!”
Mary Oliver

It was mid morning but the desert heat was already scorching my energy. Magellan and I were at Bahla Fort, its ochre walls, towers and rooms enclosing what had been, for three centuries, the flourishing capital of Oman. Not a worker, not a tourist, not a wisp of wind as we wandered through this UNESCO site.

There was no place to get a drink and my water bottle was dry.

I moved, slowly, toward the exit. Magellan had gone ahead to start up the air-conditioning in the Land Cruiser. Getting closer, I could see him talking to a young man standing beside the only other vehicle in the parking lot. “I’m Abdullah. I suppose you wonder why I am talking to your husband?” he said. “I want to practice my English. Would you like to come to my house? I invite you for coffee and dates.”

The invitation came as a bit of a shock, even though we’d heard that Omanis are famous for their hospitality. We thanked Abdullah, cautiously explaining that our plans were to see Jabreen Castle. “Follow me to my home for coffee and then I will take you there,” he said. Magellan and I glanced at each other. Seconds later we were following Abdullah’s grey car.

Abdullah is a 25-year-old aviation police officer who accompanies Oman’s officials when they travel by helicopter—he’s even escorted Sultan Qaboos. He was on a 12-day leave, happy to be with his wife Ekhlas, their seven-month-old daughter Alreem, and the dozen others who live in their large family home.

Abdullah invited us to sit on the carpet in the majlis (men’s room), its walls painted bright blue, three of them lined with paisley lavender sofas. Ekhlas brought out silver trays and the four of us sat cross-legged on the floor drinking coffee flavoured with cardamom and eating dates dipped in sesame paste, their sweetness offset by tangerines. Alreem circled around us in her walker, babbling and giggling. Good thing Abdullah wanted to practice his English as we asked many questions, beginning with “Is it common to have brightly painted walls in Oman? Do most people’s homes have pastoral scenes like yours on the walls?” (Yes to both.)

“Why is there so much housing construction everywhere?” we asked. Abdullah explained that young Omani couples are getting loans to build their own homes instead of following tradition and living with the husband’s parents.

“Weddings—what happens here?” we asked. “And do men your age have more than one wife?” As we expected, Abdullah told us that in Oman today, most young men are marrying for love and have only one wife. Then he told us about their marriage.

“I asked Ekhlas’s father for her hand. Then I had to wait about two weeks while her father asked around about my character, conduct and family.“ He explained their wedding, a simple ceremony in his father’s house with family and friends, he and Ekhlas sitting on raised chairs. When we told him about the North American fad for weddings in tropical resorts, he said, “You might as well burn your money. That is not about love.” He also philosophized, saying that a man and a woman make a whole, that “without a woman, a man is only 50% whole.”

Ekhlas told us how much she loved the two months they spent in Southampton where Abdullah took police training to improve his English. Crime, they explained, is not an issue for the police in Oman; public safety is their main job.

Having seen a few of Oman’s barren villages with just a handful of residents, I asked about income supplements and health care. “The Sultan does not want anyone to suffer, so not only poor people in remote areas are taken care of—everyone is,” he answered. “Health care costs 1.6 rials per person per year.” (About $5.)

“Excuse me,” said Abdullah, while he had a brief conversation in Arabic with Ekhlas, then asked if we were ready for him to drive us to Jabreen—and invited us to return for lunch. “Ekhlas will make a curry. She boils the beef first so it is very tender. Do you like curry?”

Bahla, a fortified oasis settlement dating back to pre-Islamic times and one of Oman’s largest

Reduced to rubble, Bahla opened to the public in 1999 after more than 25 years of restoration

A labyrinth of towers, dwellings, shops, a mosque, a souq and meeting rooms served by a sophisticated water system

Unbaked clay and straw bricks, the colour of sandstone dabbed with marigold

The library? (there’s almost no signage)

The stark design is similar to the adobes of New Mexico

Beautiful adobe interiors with anterooms and passageways in every direction

Like Bahla, Jabreen was a fort, but more importantly a castle for the Imam when “church” and state were one in Oman. Abdullah told us it’s considered the most beautiful castle in Oman and that it was built in 1670 by Imam Bel’arab bin Sultan Al Yarubi. “His father was the Imam who ousted the Portuguese from our country.” Jabreen, he said, housed about 1,000 people in a labyrinth of rooms (55) and courtyards on five floors with vaulted staircases leading to an exquisite rooftop mosque. He made sure we looked up in the Sun Moon Room to see a ceiling adorned with spectacular eye-shaped designs. In the Imam Protection Room he explained that when the Imam met with anyone he didn’t trust, his soldiers hid underneath the floorboards in four interconnecting rooms. “Like in Roman times, they also poured hot oil on unwanted guests, date oil,” he explained. Abdullah told us that every night one of the steep steps was removed so any traitor trying to get near the Imam broke his leg. And then was hauled to the prison, a five-foot cube if you were a man, a considerably larger room if you were a woman. When we saw the huge serving platters, a home-cooked lunch was all I could think about. 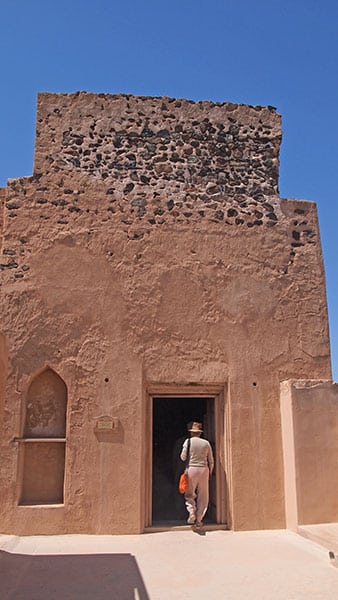 Jabreen has two mosques and was also a centre for the study of law, history, medicine and astrology

But first, another surprise.

“I want to show you my favourite spot in Bahla. It’s where I come by myself or with Ekhlas. The view is beautiful and not many people know it.” We drove to the top of a hill with a panorama of Bahla to the east and to the north, Misfat al Abryeen, where we had hiked and camped the day before.

Then lunch. Tucking our feet underneath us (it’s considered rude to show your feet in Oman), we mounded basmati rice onto lettuce leaves and topped it with beef curry, peppers and onions—using only our right hand (it’s improper to use your left hand to eat in Oman). Our hosts accommodated us the best they could by offering us the only cutlery they had in the house—a fork and a spoon. But we struggled willingly without. Alreem (who was napping) was probably better at eating with one hand than we were—and with the bits of rice that had fallen on the floor, it was a good thing Ekhlas had covered the carpet in the majlis with clear plastic. The food was delicious, the curry deftly flavoured, everything served at room temperature.

After lunch we continued talking and got onto the subject of technology. Abdullah showed Magellan how to hold his finger on his cell phone and voila—magnification to insert or delete a character—a good feature for jubilados.

It was 4 pm and time for us to leave.

“What shall we give him?” Magellan whispered when Abdullah went to find Ekhlas to say good-bye to us (she hadn’t eaten lunch with us). “No, no,” said Abdullah. “I will accept nothing. I insist. You have been too kind letting me practice my English.”

All he would take was a handshake.

“Fall in!” Heeding poetic advice, we were falling more and more in love with the extraordinary Oman and the country’s tagline: where beauty has an address. Ironically, we couldn’t send a handwritten thank-you note—Oman has no domestic postal service.

Bahla Fort  a UNESCO site of an ancient mud-walled oasis in the Omani desert.

Well-preserved and beautifully restored, Jabreen Castle is only a few kilometres from Bahla Fort.

For the Smell of It

A Picture and a Poem

The Most Wondrous Temple in the World
Scroll to top