A cluster of white

Imagine a hilltop town, blindingly white cubist architecture, a labyrinth of narrow streets under skies blue as lapis lazuli. Did you think you were in Greece?

That’s how we felt when we arrived one Sunday afternoon at Vejer de la Frontera, a pueblo blanco in Andalusia.

Having a reverence for minimalism, I can’t tell you how often images of the pure, whitewashed simplicity of Vejer de la Frontera reappear.

Maybe one of the reasons Vejer de la Frontera appealed to us was its welcome contrast to the noisy bustle of the big, coastal city of Malaga and the hordes of tour buses disgorging people onto the plaza above the gorge at Ronda. (I know George, you loved Ronda. Sorry.) (And there’s lots to like about Malaga, especially The Fundación Picasso.)

“Didn’t I tell you it’s a walled town?” I said to Magellan after he parked our rental car and we began backstopping our suitcases from falling as we climbed the steep, cobbled staircases toward the Hotel V…

If cobblestones could talk...

Why we didn't drive up to Hotel V

The whitebrightness of the town at noon in October was so stark that my eyes welcomed a chance to rest on a rainbow of colours, the Sunday market. Tables abounded with heaps of clothing of wild patterns and bright colours, stalls of red peppers and purple eggplants, handicrafts of textured woods and delicate lace. The market was in full force on the winding streets, brimming with the chatter and laughter of locals and tourists.

The Sunday market, a labyrinth of colour

To work up an appetite for lunch, we headed to the outer walls of the city, climbing as high as we could to get a view of the surrounding area. It was a clear day (which most are in Vejer de la Frontera), so we had exceptional panoramas of the La Janda countryside, the Sierras and across the Atlantic to North Africa.

Take-your-breath-away beauty in every frame

Lunch! We chose Casa Varo because its outdoor tables were on a quiet side street beckoning us to sit down. It was almost 2 pm but we were the first to arrive. Soon there was much greeting and kissing and moving of tables as five older couples arrived. Every ten minutes or so, a few people at their table would change places, the conversations growing more animated and lively as the afternoon wore on. So engrossed were they in the pleasure of each other’s company, one guy didn’t notice our eyes being drawn back to his face all afternoon—we called him Orval the Elder because he looked so much like an older version of a next-door neighbour in Calgary. Juan and his family served us a delicious tuna tataki and cava rosé while the table of ten indulged in plate after heaping plate of assorted tapas, salads and meats.

The locals, lunching at Casa Varo

Was it the stretched-out feeling of a lazy Sunday afternoon that sharpened our memories of our tiny odyssey into Vejer de la Frontera?

I’d chosen the town primarily because of the Hotel V… In a 17thcentury townhouse renovated in 2008, the owner, Jean Van Gyse,has mingled many of the original Moorish features (like arches, beams and bannisters) with eclectic modernism (like black-and-white photos on glass). Hotel V… is intimate; there are only 12 rooms.

Our loft room at Hotel V...

Is there a Spanish word for élan? 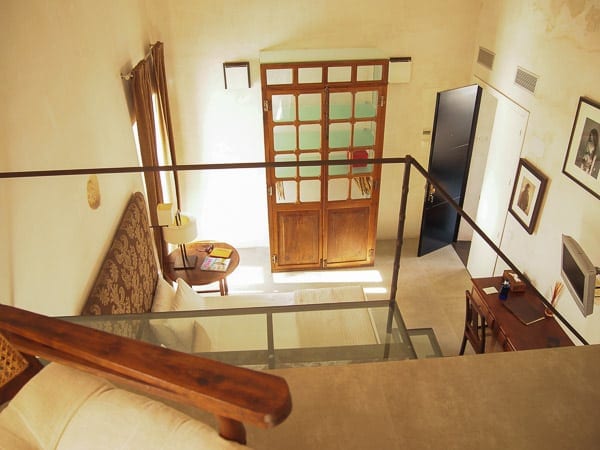 We headed to the lounge chairs on the roof terrace, its views long and languorous, getting up from our books and travel plans from time to time to dip our toes in the pebbled foot pool as Sunday afternoon slowed to a close.

“It was our favourite hotel of the entire trip. Gerri and Doug’s, too,” said Marsha when she and I were talking about their three-week trip to Spain this spring. “We loved the honour bar system.” How could I have forgotten about that the G&Ts we took up to the terrace?

Up on the roof, we learned a little more about the town. Every civilization was here it seems, except the Greeks. Pre-Romans. Romans. Phoenicians. Carthaginians. Visigoths. Then, for more than 500 years, the Moors.

La Frontera translates into on the frontier. Frontier of what we wondered?

In 1248 Ferdinand II captured Vejer from the Moors and added de la Frontera—the town became a frontier border between the Arabs and the Christians. When you pass through any one of the town’s four arched entrances you see the Moorish influence in the style of its houses with their inner courtyards and flat roofs and the steep, narrow maze of streets. It’s easy to see why the town was declared an Historical Artistic Monument of National importance in 1976.

There’s quite a story we read about the town, as legendary here in Vejer de la Frontera as one of Homer’s epics is in Greece.

In 1292 Guzman el Bueno sacrificed one of his sons in the battle of Tarifa, a son who was being held hostage by the Arabs in an attempt to force the town to surrender. The next year Guzman became the first mayor of Vejer de la Frontera. A few years later, Fernando IV gave him the town as a reward for his efforts!

The third reason we chose this town, after its pueblo blanco beauty and the Hotel V, was the El Jardín Del Califa restaurant. Set under the stars “like a caliphate’s garden,” the menu is a cornucopia elaborate as a caliph’s banquet. Exotic dishes like Cacik (a cucumber, mint and yogurt soup), and breuats (pastries filled with meat spiced with Ras al-­‐hanout, tahini, garlic and yogurt). Couscous,and kebabs. Tagines and fresh fish. Our bellies were full but our minds are white-blank when it comes to what we ate. And my diary is silent on the matter. “SPEAK, MEMORY.” But we do recall that it was an anniversary gift from a friend. Thanks Pat!

The aromatic flavours of Arabic cuisine—did we have the house speciality, Tagra de Tanger, a tagine of red bass with preserved lemons, peppers, olives, tomatoes and potatoes, spiced with paprika and cumin?

It’s a storybook town, Vejer de la Frontera. And like a favourite childhood story, one you want to read over and over and tell everyone about.

Plaza de España, said to be one of the prettiest village squares in Spain, its old fountain decorated with ceramic Andalucian frogs that spout water

The family restaurant Casa Varo offers a Sunday afternoon of relaxation and  languor.

Dinner at El Jardin del Califa will transport you to Arabia.

Hotel V… is an outstanding boutique property in this lovely town.

“Did You Miss Home?”
Scroll to top