“Why did you love Norway so much?” friends ask. I’ve been wondering myself, searching for a simple answer, for the finest example of Norway’s transcendence. In Calgary’s new public library, it came to me.

The awesomeness of Norway can be found in a single place, the Snøhetta Pavilion, the Norwegian Wild Reindeer Centre.

What does the Snøhetta Pavilion have that exemplifies all of Norway?

Snøhetta Pavilion in the Dovrefjell Mountains is home to the last herds of wild reindeer in Europe, to musk oxen, Arctic foxes and small, rare plants. It overlooks the highest mountain in the Dovrefjell range, Snøhetta—the inspiration for the name of the architectural firm that built this gorgeous pavilion. The hour’s drive to get there gives you a taste of the country’s geographic diversity as the scenery transitions from pine forests to birch groves to the barren highlands of the Dovrefjell.

Norwegians love being outdoors. To get to the Snøhetta Pavilion you park your car and walk uphill about 1.5 kilometres beginning at 1250 metres above sea level.

The Snøhetta Pavilion is a public facility—access is free to all.

Bare is the parking lot except for a repurposed rail car that functions as an information centre about the pavilion. No tour operators. No food outlets. No tourist shops. No trinkets for sale from the back of someone’s car.

If it were in Canada, you’d see a neon reindeer sign, a restaurant selling reindeer hotdogs, a gift shop selling reindeer-faced coasters. A pricey lift would swoop you up the mountain. An iron gate would bar the parking lot after hours. The door to the Snøhetta Pavilion would be locked, bolted and guarded at night.

Am I being too harsh? Have a look at the Columbia Icefield Skywalk.

Thousands of years ago the Dovrefjell range was a major hunting ground. Stone plaques laid flat onto the ground outline the history of reindeer in the area, starting at 8000 BC during the last Ice Age to present time.

Since the time of the Vikings the vast Dovrefjell separating northern and southern Norway has been one of the country’s main transportation routes, the Kongevegen (Kings’ Road). Monarchs and pilgrims braved the challenges of crossing the mountains to the country’s capital city, what is now called Trondheim. Today’s backpackers can enjoy the same majestic beauty on the same Pilgrim Trail from Oslo to Trondheim, pausing for shelter in the pavilion alongside school groups, visitors and mountain guides.

The founding fathers of the Norwegian constitution (1814, the second-oldest written constitution in the world) declared they would be ”United and loyal until the mountains of Dovre crumble.” National legends, myths, poetry like Henrik Ibsen’s ”Peer Gynt” and music like Edvard Grieg’s “Hall of the Mountain King” celebrate the area’s mystic qualities.

Snøhetta Pavilion’s true name is Tverrfjellet after the mine site that operated here until 1984. Who can pronounce that? Besides, with the many worldwide awards the architectural firm has won for this structure (like ArchDaily’s 2011 Cultural Building of the Year and Best Nordic Building 2011), guidebooks, many Norwegians, and Magellan and I call it the Snøhetta Pavilion.

According to a park attendant, after the financial crash of 2008 the Norwegian government decided to fund this observation pavilion for the Wild Reindeer Foundation’s educational programmes  in order to to provide work in the area.

The exterior, a rectangular frame of raw steel and glass reflecting the surrounding landscape, contrasts with the intimate, curvaceous interior. The exterior surface was left to rust naturally to a red-brown colour, like iron in the local bedrock. The interior ensemble of undulating pine that provides unique seating looks like the mountain it sits on, mimicking the eroding affects of wind and water.

Materials for this 90 m2 building were selected for their quality and for their durability to withstand the harsh climate. They reference local building traditions—but with a modern twist. From cutting-edge 3D models, the fluid forms of the interior were fabricated by Norwegian shipbuilders from pine timbers and sculpted using robot-controlled milling machines. But in a traditional way the beams were assembled using only wooden pegs as fasteners before they were treated with oil inside and pine tar outside. Apparently the biggest challenge was smoothing the ceiling. 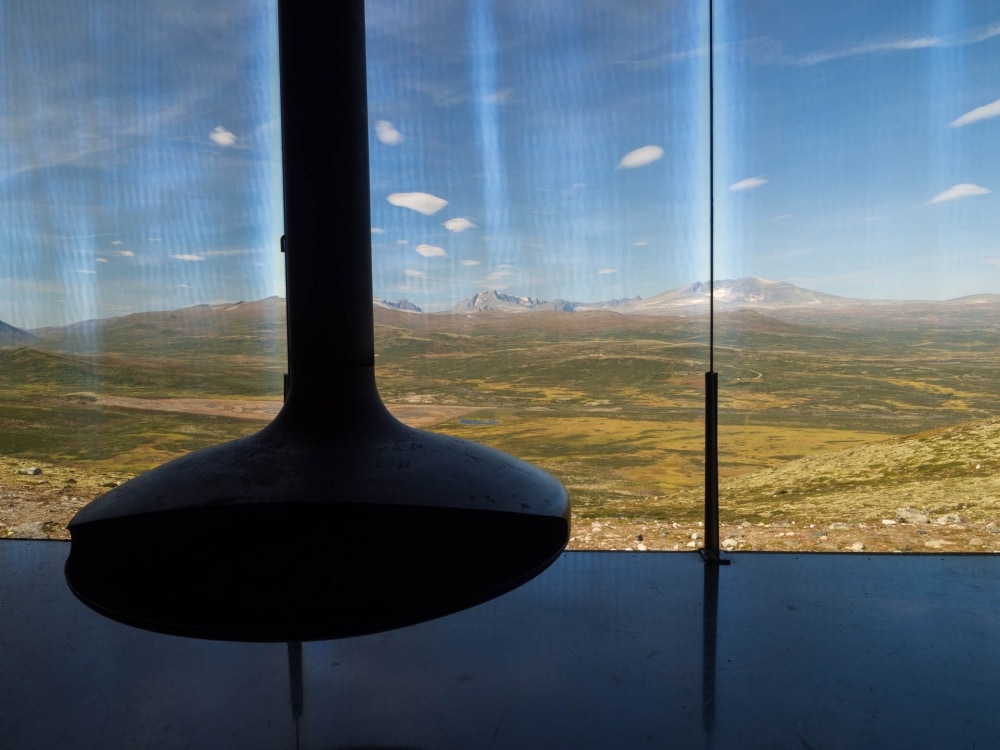 As soon as I saw Calgary’s new Central Library, I felt an affinity. That’s because it too, was designed by Snøhetta—a company whose designs are based on human interaction. Snøhetta has booked many awards since it opened a year ago like the AIA/ALA Library Building Award honouring the best library architecture and design. For innovation in rethinking libraries, Fast Company named Snøhetta to its prestigious annual list of the World’s 50 Most Innovative Companies for 2019.

Similar to the Danish Hygge, Koselig is the Norwegian word for a feeling of coziness, intimacy, warmth, happiness, contentment. The feeling that comes from a crackling fireplace. The warm glow of candle-lit rooms. Simple, wholesome food. Cozy, home-knit sweaters. A glass of Aquavit before bedtime. 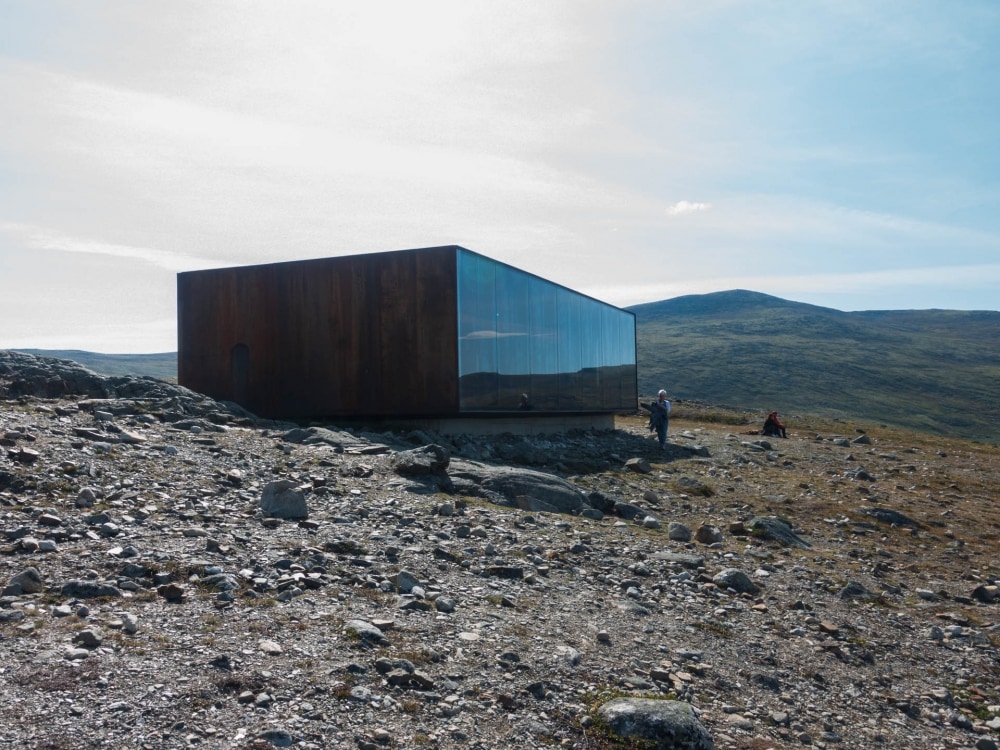 Reflections of the synchronicity of the Snøhetta Pavilion and its surroundings

Open the door of the Snøhetta Pavilion and you’re greeted by a sinuous wooden ensemble that contours to create a durable surface where you can lean, sit or recline. Facing south, a floor-to-ceiling glass façade spans the entire length of the pavilion giving you a spectacular, panoramic view of the landscape. Adding to the warmth and protected coziness of the space is a singular wood-burning fireplace that adds ornamental and functional koselig to the space.

When we were there, kids were racing around the space, couples wrapped their arms around each other on the top level, hikers clustered around the fireplace warming their hands and eating lunch.

Like a butterscotch lozenge, the Snøhetta Pavilion is a small symbol of the delights that await visitors to Norway.

This professional YouTube really showcases the beauty of the Snøhetta Pavilion.

And here’s Snøhetta’s website, where you can see more of their philosophy and projects, including Snøhetta Pavilion. Every year the group hikes up the mountain that lent them their name.

The “Inyo” of the Yuhodoh Hike on Japan’s Mount Tsurugi

Beware of Bøyg: the Norwegian Troll who Hinders Travellers

The Foxes Come to Visit
Scroll to top