I’ve dreamed about Norway every night since we returned, almost three weeks ago. Magellan and I agree that Norway is the best country we’ve ever visited.

And why is “the Nor Way” so compelling you may ask?

“Norway is the most beautiful country in the world, “ we heard from many sources. They were right.

A beauty that’s pure, raw, natural. Elongated and narrow, Norway is about 1,750 km from north to south, longer than any European country, but only 430 km east to west. However, the jagged coastline, if straightened, would stretch for forty-five thousand kilometres. Mountains cover three-quarters of Norway. Fjords pierce their deep blue waters into its heartland. Plains of tundra, dotted with pale green lichen and tussocks bronzed the colours of early autumn, expand toward the horizon. (“You missed summer,” many locals told us, apologetically: intentional on our part.) Because a third of the country lies above the Arctic Circle, the air has a sharp, clean light that makes you feel more oxygenated, more alive.

Hardangerfjord near Røte from the Queen's Panoramic Hike 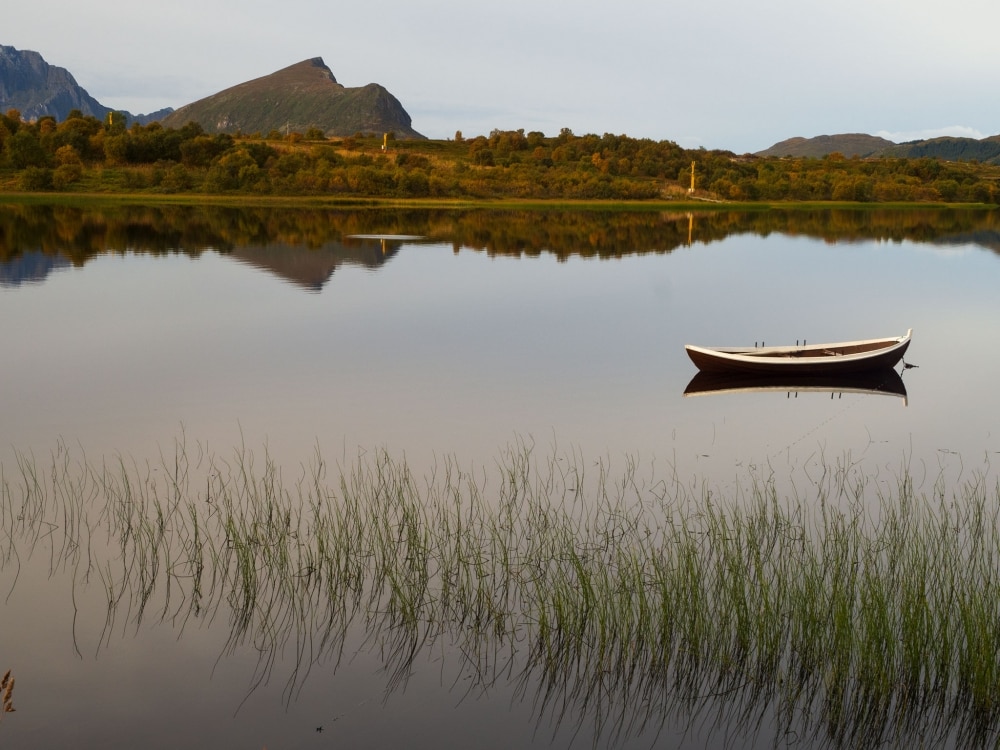 Hardangervidda Plateau, the largest of its kind in Europe

The Lyngen Alps near Tromsø

A thousand times I found myself exclaiming to Magellan about the scenery, only to round the corner and discover a more picturesque farm, a narrower fjord, a higher waterfall, a greener mountainside.

One of the Seven Sisters on Geirangerfjord

As the driver, Magellan got to appreciate Norway’s beauty far more than in other countries. That’s because Norway has set a speed limit of 80 km/hour, reduced to 50 km/hour in the many villages and towns. Its drivers obey the law. They don’t tailgate. You know they’re likely sober. Norway’s blood alcohol limit for drivers is 0.02 and if you’re caught with a higher level, your insurance is void and you’re fined one-half of your annual salary. 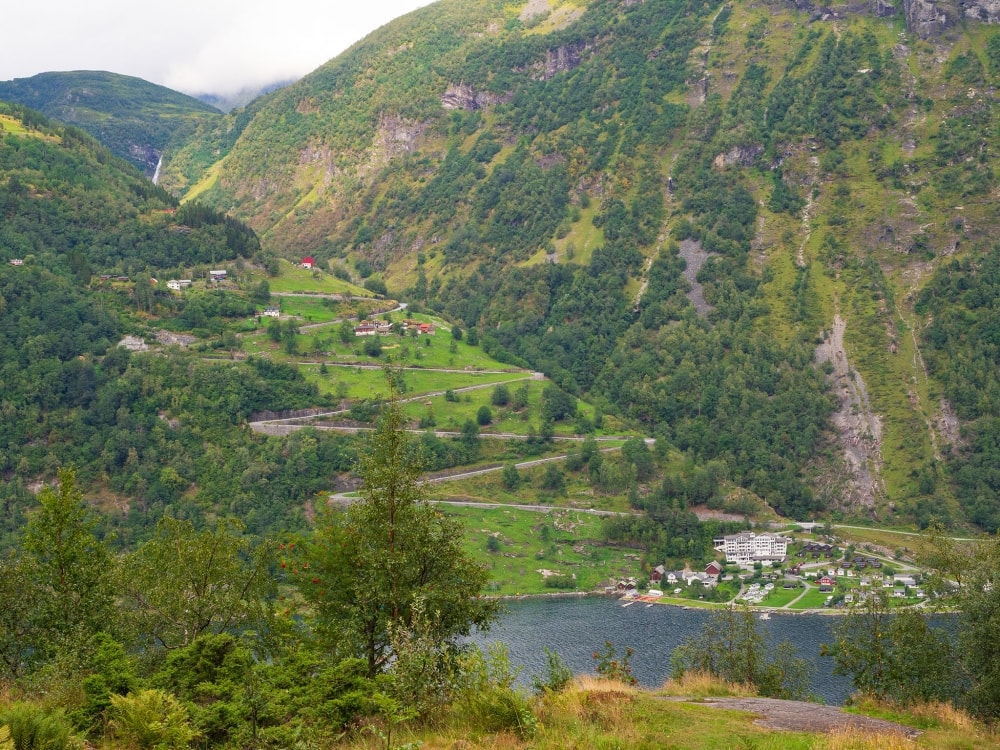 Norway is the most pastoral country we’ve ever visited. The many farms, miniscule in size compared to ours, snuggle together between mountains and fjords. Since the country’s population is only 5.3 million, we were flummoxed: so many houses, so few people. Turns out one-quarter of the population own2 a hytte, in the forest or above the tree line; one guy told us some families have two homes in the same village, one near the water and a second twenty minutes away up the mountain! Still, how can all these farmers make a go of it financially we wondered? 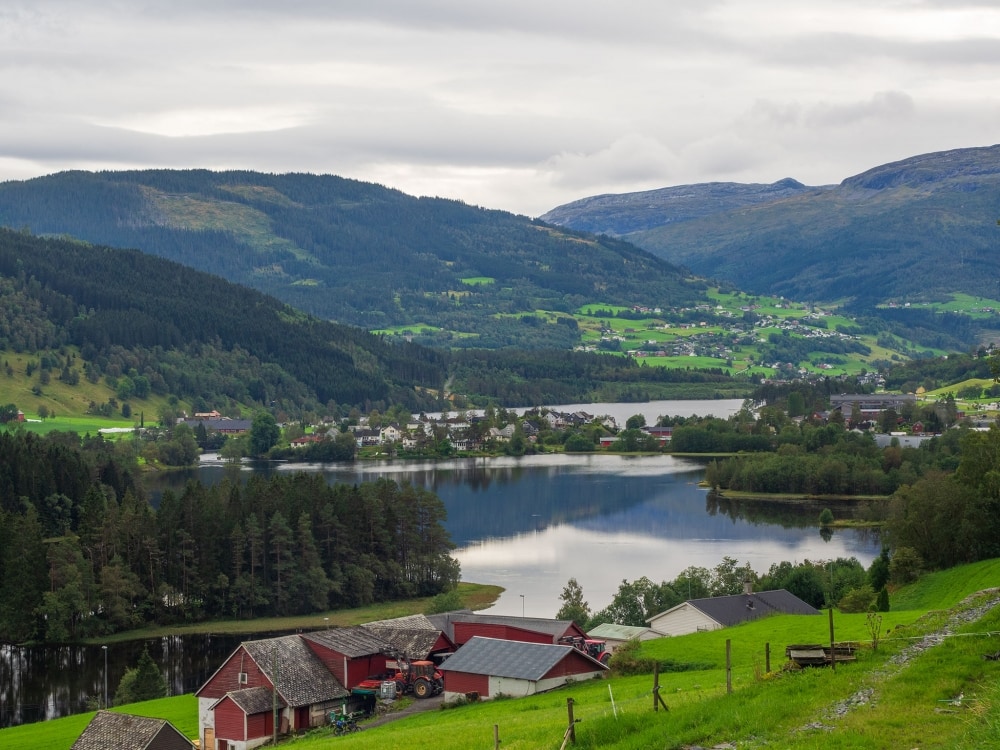 Near Skreio NE of Bergen 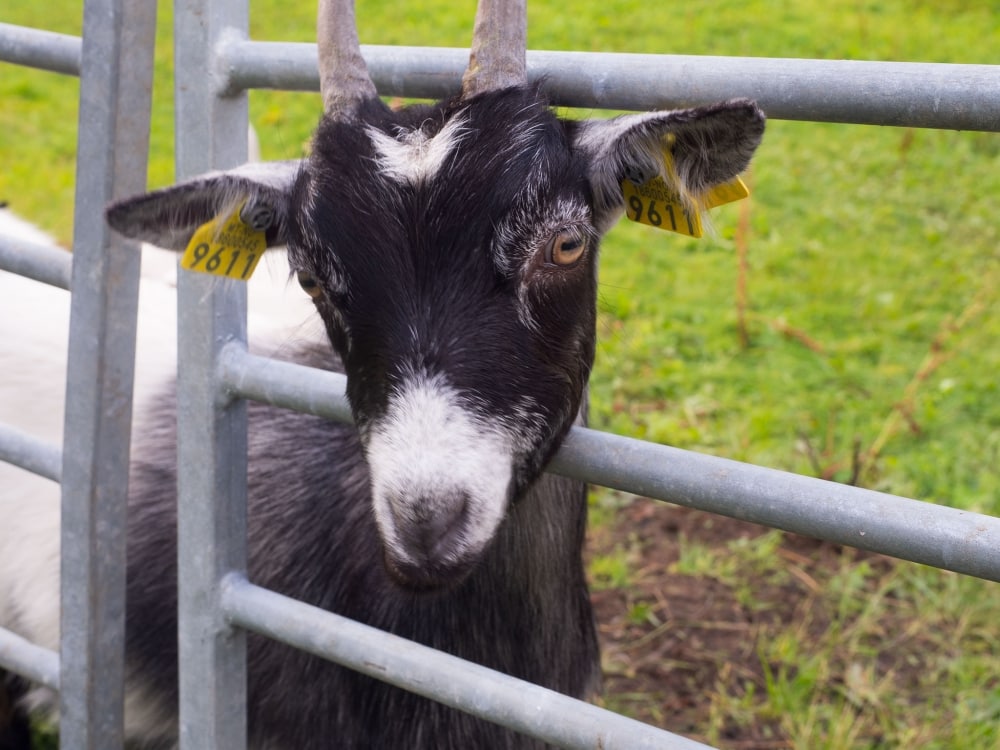 The OECD (Organization for Economic Co-operation and Development) says each agricultural holding in Norway receives about 60% of its gross income from subsidies, the highest in the world. (Switzerland is second, Japan third.) Farmers also receive special tax breaks and relief from customs’ tariffs on items like food imports. Which is important because Norway’s cost of groceries is 86% more than the average for EU countries. (Norway is not part of the EU.)  Laws limit corporate ownership of farms and provide advantageous inheritance terms for farm families.

And what a pleasure to travel in a country whose citizens appear content with their lives.

The United Nations ranks Norway #1 in the world for human development. Ditto for many other studies, including one of 148 countries conducted in 2018 by the Legatum Institute. “As one of the world’s wealthiest and least-corrupt countries, Norwegians experience an incredibly high quality of life. Thanks to a strong infrastructure of social services, Norway ranks high on just about every metric used to determine quality of life within a country, including health, education, governance, and freedom. Norway also consistently ranks as one of the world’s happiest countries.” (It slipped to #2 in 2018 in the World Happiness Index rankings.)

Lynn gave me a wonderful book about Norway in which the author, Paul Watkins, talks about an honesty experiment in several European countries. Eight wallets containing small amounts of money and the addresses of their owners were deliberately left in public places in each country. Only in Norway were all of the wallets returned.

The wallets of Norwegians are thick—in addition to good working conditions they take home some of the best salaries in the world. Plus, Norway has managed its oil wealth so well that each citizen’s share, ticking upward by the second, is worth 1.8 million Norwegian Kroners. Public funds have been directed to building roads (narrow but well-maintained even in the most rural areas we visited), a multitude of well-run ferries, more than 1,000 tunnels (the longest is 24.5 km, one we were in had a roundabout and many are underwater: note to BC Government—are you blind to what can be done?), subsidized child care with 49 weeks of paid parental leave with full salary plus a “daddy” quota of 15 weeks, excellent libraries like the new one opening in Oslo next year with its Future Library, a hundred-year art project, (nine out of ten Norwegians read books), art galleries (a new Munch Museum in Oslo in 2020, a new art gallery in Trondheim)…

Norway is a democracy with a constitutional, hereditary monarchy. Queen Sonja is a painter, ceramist, hiker (and a trooper given the trails we were on that bear her name, that she climbed in her mid-seventies), was VP of the Norwegian Red Cross, raises funds for refugees…Erna Solber, Leader of the Conservative Party and prime minister since 2013, has been involved in politics since 1989 and holds a degree in sociology, political science, statistics and economics. Deep-sea petroleum reserves have enriched the country. “It is profitability which will determine whether we will expand oil and gas (industry) in future,” Erna recently told reporters. “We are going to have oil for many years to come, whether you like it or not, but we must prepare for a scaling-down because we are seeing huge cuts on the consumer side,” she added. Hmmm. A leader who’s well educated, experienced, long governing and full of common sense; Canadians, wouldn’t you like this?

Calm. I can’t tell you how often Magellan and I used that word to describe the Nor Way.

Take Oslo for example. As a major step toward making the city centre car-free (they started pedestrianizing their streets in the ‘70s), this year Oslo finished removing more than 700 parking spots, replacing them with bike lanes, little parks and benches. Wisely, they built a ring road, added traffic garages on the perimeter, left spots for disabled drivers and allow delivery trucks in the early morning and emergency vehicles at all times. The city began investing heavily in public transportation in the ‘80s. Buses are equipped with seat belts and chargers for your cell phone! I remember a designer friend back in the ‘90s lamenting the North American trend to smear public buses with corporate advertising. Not the Nor Way. Their buses are one strong, solid colour, easy to identify and not a visual eyesore. Unlike the bombardment of adverts on the roads and streets of most countries, there is almost none in Norway. (They banned smoking ads in 1975!)

If we had to choose a singular characteristic of Norwegians, it would be their love of the outdoors. They call it allemannsretten, “all man’s rights to fish, forage, to enjoy,” an ancient Norse right to roam uncultivated countryside even if it’s privately owned, a right that’s entrenched in their constitution. More than any other country we’ve been to, Norwegians value outdoor recreation and, by extension, simplicity and freedom. Apparently on Saturday mornings the streets of Oslo are bare, its citizens are out hiking or cross-country skiing—and public transport gets them there in half an hour. A large number of Norwegians have motorhomes—and the country is set up for them like no other. Our friends Myrna and Bill have lamented that in the US, they couldn’t attend evening events in most cities because the campgrounds for their fifth wheel were miles away. Not in Norway. Every city and town has parkering camp spots downtown, some, like in Ålesund and Geiranger, are right on the water. 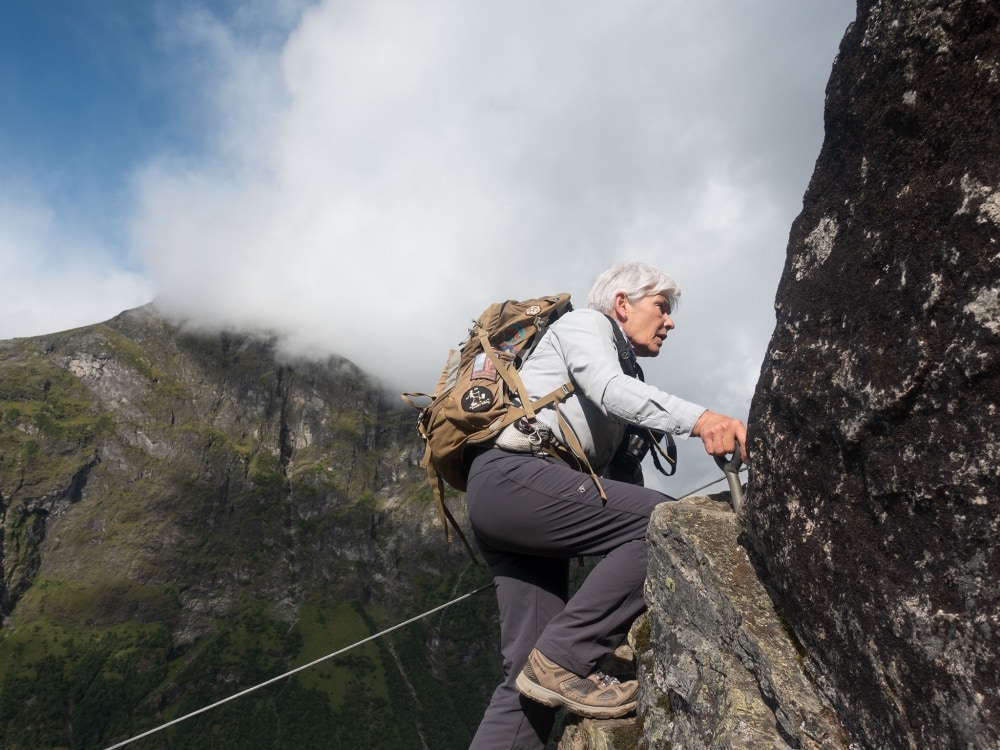 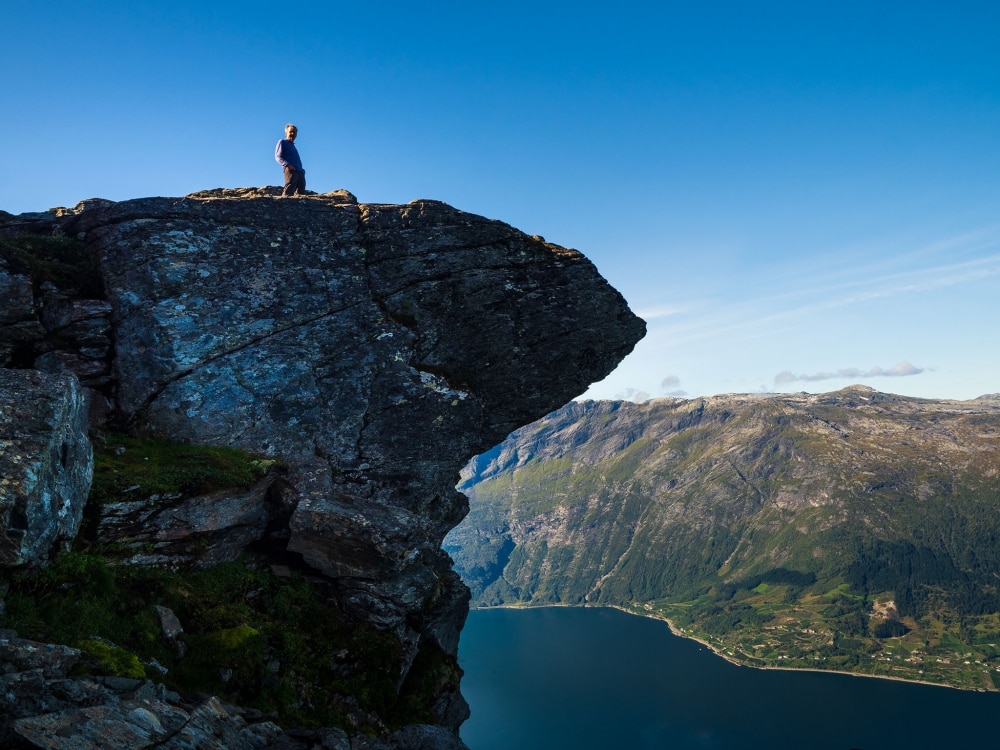 You can see why the Queen loves this hike

Noysom is a word Norwegians use to describe themselves. It means cautious and I think it’s a true reflection of their nature. People don’t stop to chat on hiking trails. At campgrounds, restaurants and shops, people are matter-of-fact, straight up and not solicitous. They do not, obsequiously, like many of the English for example, say “sorry” when they bump against you on the bus, not because they’re impolite but more because they see it as a natural outcome of the situation that’s not particularly their fault or of major concern anyway. It’s kind of a get-on-with-it, Stoic approach that’s feels, frankly, more honest. Like the achievements of Roald Amundsen. The music of Edvard Grieg. The art of A K Dolven. The writing of Karl Ove Knausgård. And they’re a bit more humble than most, Jantelovens, Jante being a fictional village with unwritten laws directing citizens not to think they’re someone special.

“How was the food?” many of our friends and family ask.

At the forefront internationally for at least a decade now, Nordic cuisine suits my palate. On the gastronomy lineup of sweet, sour, salty, bitter and umami, the Nor Way tends more to the latter four with its abundance of pickled, fermented (like the latkes at Credo Restaurant where half of the potatoes are fermented for added flavour), smoked, cured and foraged foods. Local for them means humble foods like the aforementioned potatoes plus carrots, turnips, leeks, celeriac—earthy vegetables—and for fruits, wild strawberries and blueberries (which we both foraged and purchased), rhubarb, cloudberries, plums and apples. They use a lot of dill and cardamom, two of my favourite herbs/spices. Their deep-water high-Arctic seafood is pure in taste and firmer in texture than king crab, shrimps, scallops or cod from North America. Butter and cream win out over olive oil. Some restaurants use no citrus, like Kontrast, where a gooseberry replaces a lemon twist in their martinis. Stop me now or I’ll go on be for five pages… 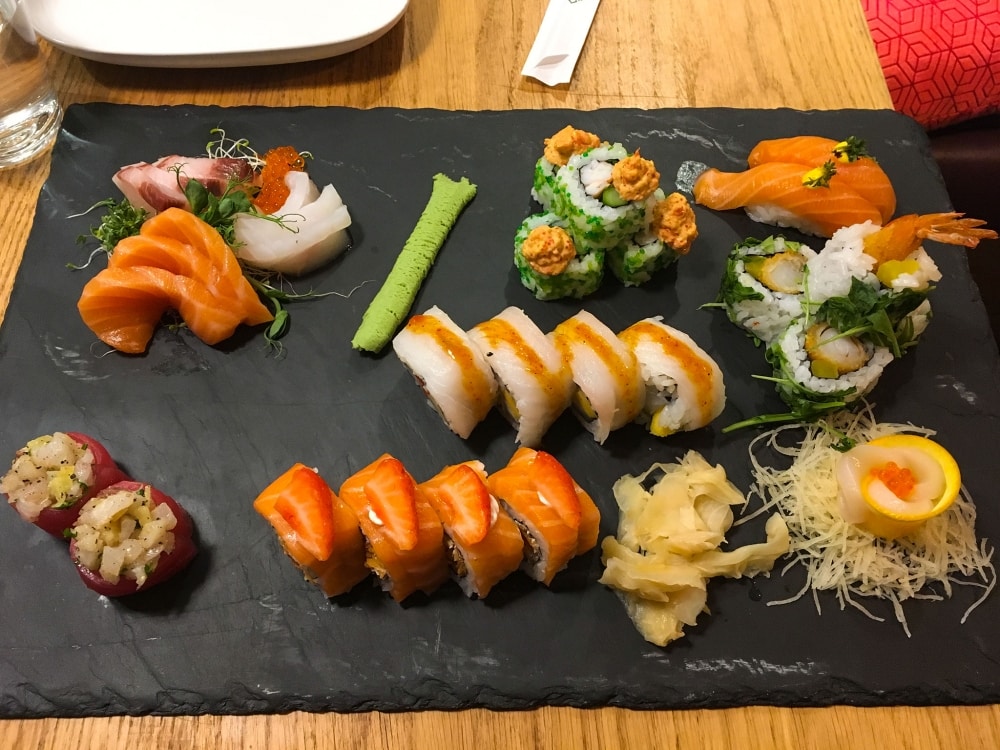 The country is not perfect. None is. A cringing example—they still hunt whales (by accident we bought whale sausage) and wolves. Norway has the second-highest high rate of death by drug overdose in Europe. Its pension fund divested from US defense stocks then bought Iranian bonds. And of course, there’s the high cost of living.

Our friend Mike warned Magellan about beer costing $15 a bottle. Guess what Mike? It’s even higher now. Eating out is more than double what we’d pay for the equivalent meal in Vancouver. In a future blog, you may see the fun I had comparing the cost of groceries. Nightly fees for a camp spot were about the same as in Canada but with more amenities—like a free sauna. The Vinmonopolet, their government liquor stores, are the only game in town for wine, which costs about the same as in BC but the Vin offers a better selection of European wines. Hard alcohol is a bit pricier than in our province. Diesel/gasoline averaged about 16 NOK a litre—$2.25 Canadian, the price ours would be if our politicians really wanted constructive action on emissions. “One thing we know for sure,” a Norwegian guy told us, “wherever we travel it’s going to be cheaper.”

The Nor Way makes for a great place to visit—in my dreams, I’m returning.

We flew into Bergen on August 20, two days after school started, to arrive in the shoulder season. After two nights in Bergen, we followed many of Norway’s south-western National Scenic Routes in a Burstner Motorhome over a three week period. We then flew to Tromso to tour the north in a small SUV rental, mainly in the Lofoten Islands. Then we flew Oslo to explore their capital city for four days, traveling on foot and an excellent public transit system.