Have you been watching the Netflix series Chef’s Table?

Did you see Season 4 Episode 2 about Caffé Sicilia in the baroque hilltop town of Noto in southeastern Sicily?

“I knew that I was in paradise,” says Faith Willinger in the opening minutes, describing her first taste of Corrado Assenza’s aromatic, flavourful and creamy almond gelato.

Caffé Sicilia is the Sistine Chapel of sweets and Corrado Assenza, master craftsman and creative genius, is the Michelangelo of sweets.

Caffé Sicilia was the reason I booked three nights in Noto. It’s also a beautiful UNESCO city, the apotheosis of Sicilian Baroque, its plazas anchored by palatial buildings in warm golden stone with carved griffins and tiers of Corinthian columns. A small city with a population of around 25,000 people, after the 1693 earthquake Noto was rebuilt ten kilometres from Noto Antica and restored early this century.

Corrado’s great grandfather opened the Caffé on Noto’s high street in 1892. Its façade of Caffé Sicilia is the antithesis of baroque. Quiet and subdued, like its owner, who shuns the limelight, preferring to let his creations to do the beckoning. In his synesthetic way, Corrado sees the flavours in his creations—wild strawberry, apricot, blood orange, pistachio, saffron, lemon—as the colours of Caffé Sicilia.

From a distance Caffé Sicilia seemed very quiet when we arrived on a Monday afternoon. Closed! Now we had only two days to sample Corrado’s sweets.

Corrrado grew up on a citrus orchard near Noto, near enough that every day after school he went to Caffé Sicilia, which his aunt was operating at the time. He refers to the Caffé as his playroom with his teacher, the pastry chef maestro Roberto Guisto.

In the ‘60s Corrado went to the University of Bologna where he studied agriculture. There he met Nives, the woman who became his wife (I think she served us one morning.)

He specialized in beekeeping, learning that the most active bees produced the most intensely flavoured honey. Judging from the flavour of his torrone and the vials of honey I brought home, the bees at his suppliers’ apiaries must be hyperactive.

Oh, yes, the torrone: now is a good time to talk about one of my favourite tastes from this sweet paradise.

One of three different flavours

Unlike most nougat, Corrado’s torrone is not rock-hard but soft and yielding, aromatic with honey from the Iblei mountains and flavoured with pistachios from Bronte (more buttery than the ones we get from the Middle East) or Romano almonds from Noto (their thick shells lock in the intense flavour that arises from Sicily’s bountiful sunshine and rich volcanic soil). Corrado helped to save Romano almonds from extinction. When traders stopped buying them because of their low yield, Corrado began buying directly from almond farmers and convinced others to do the same. The happiest moment in writing this blog is when I discovered his ambrosial torrone is available online. “For my birthday…Dear Santa…”

When his aunt fell sick, Corrado and his wife Nives returned to Noto from Bologna to take over Caffé Sicilia. In the Netflix episode you see that Corrado is as passionate about attributing his success to his apprenticeship to maestro Roberto as he is about his respectful commitment to the quality of Sicily’s raw ingredients. Apicius magazine featured Corrado and his own garden in which he’s nursing a handful of wild Sicilian strawberry plants. From their annual production of tiny fruits he makes less than half a kilo of sorbet, which he offers to people strolling past his caffè, an act that displays his generosity and his desire to share his passion for the the natural  culinary treasures of Sicily. Corrado laments the loss of Sicily’s of gardens, orchards and farmland to “fake cities,” a relinquishment that results in the simultaneous diminishment of the island’s cultural heritage.

April was too early for us to taste wild strawberry sorbet—or lemon granita. Although our hotel served a sumptuous breakfast, we hurried to Caffé Sicilia. Sicilians don’t drink coffee at breakfast. Instead, they eat a rounded brioche with a lemon or almond granita. Almond and blood orange were my favourite flavours, espresso was Magellan’s.

Every one of the staff wears a smile

In the afternoon almond gelato lifted my tastebuds to the ceiling, two days in a row.

I wish I had tried the torrone gelato

Romana almonds intensified the flavour in frutta martorana, marizipan beauties made to look like miniature fruits, another of my favourites. 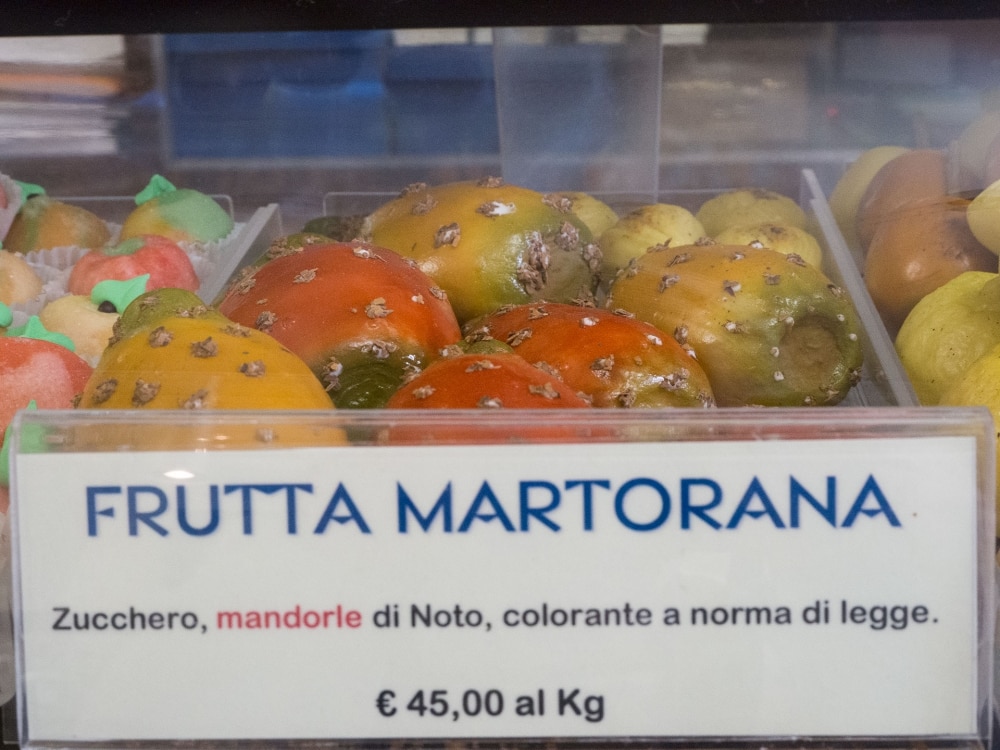 Citrus more real than those just picked from the tree

The showcase where Corrado’s masterpieces are briefly displayed before someone succumbs to their spell. Unlike the precise machine-like superficiality of every tiny detail on the the little cakes and tarts featured in many pastisseries, Corrado’s sweets display the touch of the artist’s hand. To him, what matters most is what’s inside.

"mandorle?" That would be almonds

Biscotti di Mandorle alle Erbe: how we wish the aroma and flavour could permeate from the screen to you

When I asked what we should take hiking (besides torrone) a woman behind the counter recommended Biscotti di Mandorle all Erbe—almond cookies with herbs. My friend Teresa makes a superb almond cookie called ricciarelli, but Corrado’s surpasses even that—could it be the Romano almonds?

In addition to presenting traditional Sicilian pastries like cassata and cannoli, Corrado experiments by adding ricotta to a gelato (and mixing in rum and pistachios) and using more unusual flavours, like a little cake I selected that was enhanced with bergamot, another with saffron.

Is it like a rice pudding with candied orange?

The imperfection in perfection

Imagine living here and being tempted daily (except Monday)

A mountain of flavours

Saffron—part of the Arabic and Greek influences in Sicily

Truthfully, my sweet tooth is the size of a toddler’s. If Magellan hadn’t ordered a beer we’d never have tasted these savoury treats exploding with the essence of wild fennel and mountain herbs—another of my favourites.

Note the bread-stick-like treats that accompany a beer

Writing this has me craving a cold, delicious sweet. It’s impossible to capture the essence of Corrado’s masterpieces but here’s a paint-by-numbers version from my friend Gail. Buy a pint of Häagen-Dazs Vanilla Bean ice cream. Let soften for about ten minutes. Turn it out into a bowl and add a few teaspoons of freshly chopped thyme leaves. Put the ice cream back in the carton and refreeze. To “Corradoize” it, I’ll stir in a small package of finely chopped Bronte pistachios that I’ve been saving. With luck maybe I’ll find wild strawberries in Saskatchewan, buy farm-fresh eggs and whipping cream and create a better homage to the Michelangelo of sweets this summer…

Pantalica: Paradisical Necropolis with a Hike to Die for