In mid-June, I drove from Latitude 49 near the American border to Latitude 69 at Tuktoyaktuk on the Beaufort Sea, rescuing Spice along the way from the miners at Dawson City.

Connecting the dots on the 9200 km return trip to Tuktoyaktuk revealed a set of spectacles. The natural spectacles and our impressions from the people we met gave us a whole new view of the North and its people.

Prior to our departure, a follower of Latitude65 who had worked for 15 years in the Arctic warned us that we might be disappointed in Tuktoyaktuk as a destination. Driving times were very long he said and the Mackenzie River Delta is best viewed from the air.

We’ve driven Highway 99, the Sea-to-Sky Highway many times to Whistler and occasionally to Pemberton and Lillooet. Howe Sound is spectacular; Furry Creek is where I broke my hip golfing, Whistler has world-class skiing and golfing, Pemberton was the start of our first off-road adventure into the Chilcotins  with Rove-Inn (our 2008 Land Rover with an AirTop tent) and Lillooet was the return to civilization for that trip.

There was very little traffic. After Pemberton, I passed only one vehicle and was passed by another. Neighbours have cycled this section. However, I know I couldn’t climb the hills without an electric bike and I don’t have the skill, courage or brakes to ride down.

In 2006 The Guardian rated the Sea-to-Sky Highway as one of the five most scenic in the world.

Highway 97 (433 km) connects the Sea-to-Sky from near Cache Creek to the Great Northern Circle Route (GNCR) at Prince George, following the Thompson and Fraser Rivers through forest and ranch land.

The GNCR is one of BC’s top loops, travelling through the untamed wilderness of the province’s north. Stopping in Dawson Creek at Mile “0” of the Alaska Highway for a photo op was mandatory. A side trip to BC Hydro’s Site “C” dam site was interesting. Nine days before we arrived in Tuktoyaktuk, a Tesla became the first electric vehicle to reach the Beaufort Sea, driven by an 84-year old all the way from California. If this trend continues, we’re going to need electricity from Site “C” sooner than predicted.

The strip from Dawson to Fort Nelson is oil and gas country. I cut my teeth doing economic modelling in this area in 1970 for Texaco but had never seen it. Pushing a road through the dense forest looked far more difficult from the ground than it did on a map from head office. I saw virtually no signs of oil and gas drilling or maintenance other than two pipelining spreads. In the Fort Nelson liquor store at high noon, it was only the sales clerk and me. “It’s pretty dead in here for a Saturday isn’t it?” I remarked. “This whole town’s dead,” she replied.

There is an excellent BC Parks Campground for a well-deserved soak in Liard Hot Springs. Get there early if you don’t have a reservation. And ask the ranger for the secret to getting out the locked gate prior to 7am if you want to be on the road by 5 am like me.

Getting an early start

I didn’t see much wildlife along the highway with exception of the stretch from Liard to Watson Lake, and on the return loop with Spice from Watson Lake south on the Stewart-Cassiar Highway. A small herd of bison, a mountain goat, black bears and a moose.

There were three bison herds west of Liard

Leaving the GNCR, my path continued along the Alaska Highway to Whitehorse.

Whitehorse is probably a great city in which to live and work and as an outdoor playground but it lacks charm and feels like a government town catering to overnight stops for tour buses bringing cruise-ship passengers from Skagway.

The North Klondike Highway runs from Whitehorse to Dawson City. I took a very worthwhile side trip to the abandoned mining town of Keno. In the museum, a former miner told me that if Spice had been in Dawson City for four days, “She ain’t never leavin.’” I did get Spice out, but she insisted we return and stay a night.

Fireweed along the Klondike Highway

The Dempster from Dawson to Inuvik is about 25 km of chipseal, 500 km of gravel, 250 km of mud and has two 1-km ferry crossings that opened in the first week of June this year, after the ice on the rivers had melted.

Trip advisories recommend you carry two full spare tires, a jerry can of gas and  prepare to kiss your windshield goodbye. Rove-Inn had come with a sexy see-through vinyl bra. I added vinyl to her headlights and to the front of our rooftop tent. We only had one spare tire but I did purchase a puncture-repair kit and an air compressor. Also warning triangles and an emergency flashlight—I don’t know why because the sun doesn’t set up there in June.

The scenery and drive were magical. There was virtually no traffic and all but a few vehicles slowed right down as they approached. There was a road crew with a grader about every 200 km maintaining a surface smoother than the rural roads in Saskatchewan. We didn’t get one rock chip, never ran out of gas and never saw anyone with a flat tire.

Tombstone Territorial Park is a terrific place to camp as you’ll see in future posts about Beringia, the unglaciated area north of here, and another we’re calling Latitude 65: Within a Degree of History. Yes! We found latitude 65!

Dempster Highway in that perfect moment between dust and mud

Crossing the Arctic Circle on the Dempster Highway 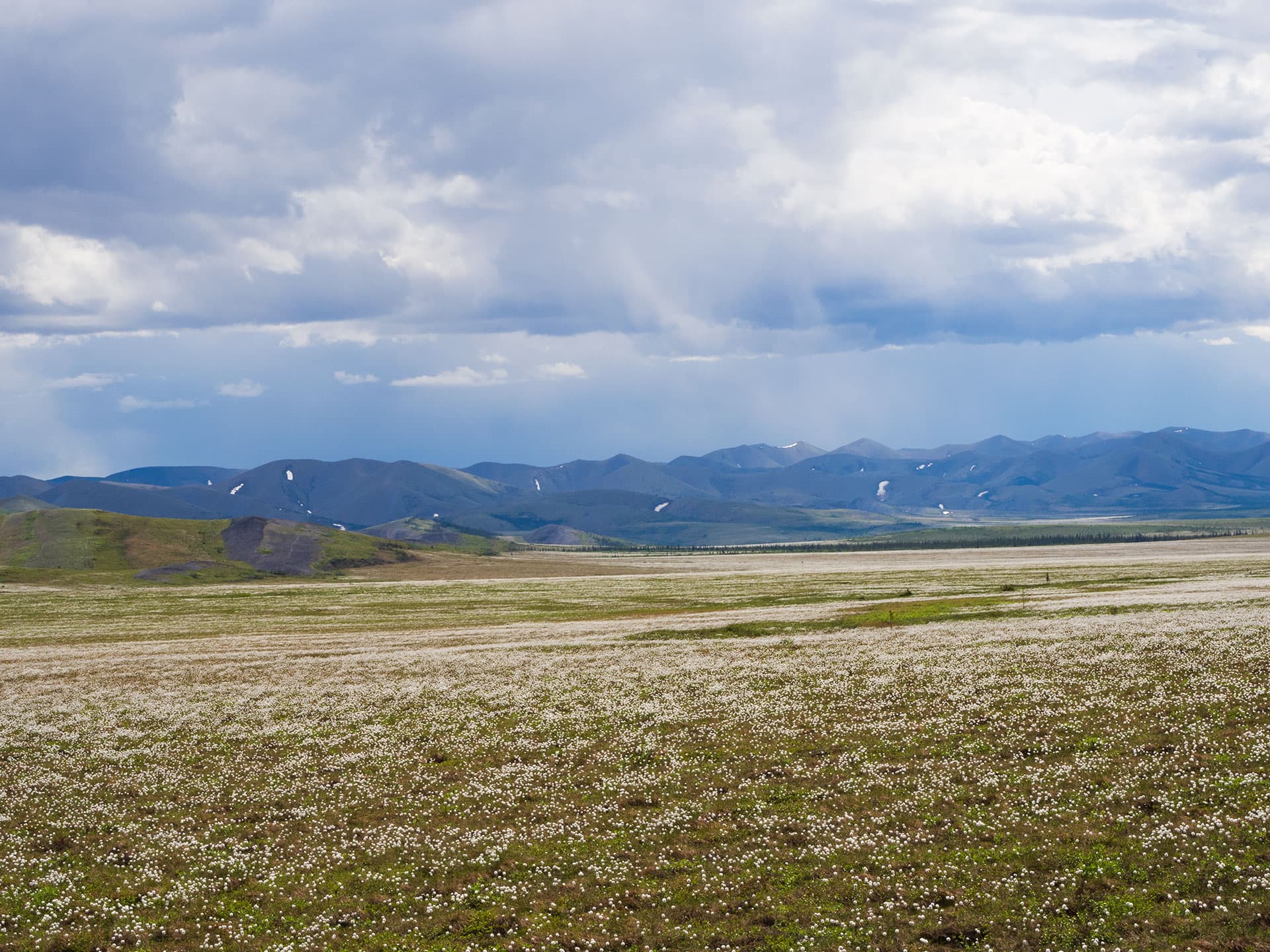 Tsiigehtchic village on the edge of the MacKenzie River

In Dawson City, a couple that had just returned from driving to Tuk warned Spice that we should duct tape our vehicle doors to avoid infiltration of highway dust. Luckily, spots of rain when we drove this route kept road dust to a minimum. Still, on several occasions I backed Rove-Inn into rivers for a bath and when we got home, I gave her three consecutive scrub-downs. That wasn’t enough. Spice discovered a shimmy at 80 km. You can see the reason in this photo:

This all-weather year-round road was officially opened in November 2017. (Prior to that an ice road connected the two communities during the winter months.) It’s a wide two-lane gravel road built with up to two metres of fill to protect the underlying permafrost. The cost was $300 million to connect Tuktoyaktuk, a village of 700-900 people, to Inuvik.  Why? We’ll give you our view in a future blog “What to Tuk?” There are a few bed-and-breakfast-style accommodations in Tuktoyaktuk, but they fill up quickly in the summer and the restaurant situation is a bit spotty. Most tourists just do one–day there-and-back from Inuvik.

One small step for Spice into the Beaufort Sea at Tuktoyaktuk

Fortunately with Rove-Inn we were well equipped to eat and sleep and found a private camp spot to spend the night. Our visit to Tuk will be the subject of another post but we loved talking to the youth in the town and photographing the hardscrabble existence of this remote community.

Returning to Dawson put us back on the Klondike Kluane Loop. The Top-of-the-World Highway connects to the Taylor Highway in Alaska. It wanders around the high points of a series of ridges far above tree line and the views go on forever.

Lunch beside the Top-of-the-World Highway

South of Chicken, Alaska, (they couldn’t agree on how to spell ptarmigan) was one of our favourite stops, Westfork Campground.

The pond at Westfork Campground, Alaska

Then down the Taylor Highway to the Alaska Highway at Tok and back to Canada to see one of the jewels of the trip, Kluane National Park. Unfortunately the glaciers in the western end were shrouded in rain and clouds.

Haines Junction is a nice stop and there are some good hiking trails in the eastern portion of the park (and King’s Throne, one dump of a hike we’ll tell you about one day.) We completed the Loop in Whitehorse.

A side trip took us to Carcross  and Atlin, then back to Watson Lake. Here we re-joined the GNCR, travelling down the Stewart-Cassiar Highway with a side trip to Telegraph Creek [future link]. On this stretch we saw more wildlife than on any other day on the trip.

We were anxious to get home after three weeks, so camped for only two more nights on our way back to Vancouver.

And what was our perception of this trip? It’s not about the destination; it’s about the journey. We live in a spectacular part of the world.

Fuego/Fogo/Fire in My Heart
13 replies