Welcoming travellers from far and wide for 90 years

I know, it’s not too fashionable to like the lone-star state. Too many guns. Too many red necks. Too black-gold-centric. Too near Breaking Bad country.

For years, West Texas has been calling us long-distance, saying “Come visit.” The quirky town of Marfa.  Big Bend National Park. And the legendary Gage Hotel in Marathon—our one-night of grandeur before a week of camping and sleeping in our rooftop tent in Big Bend.

Driving for miles on the desert Highway 285, fracking trucks, like herds of Longhorns, hustled in both directions, their sheer bulk and momentum an intimidation to our Rove-Inn.

Finally, at Fort Stockton, its very name signifying “stock,” we were in cattle country. Calm arrived. The landscape of cracked open spaces, like fragments of terracotta, were behind us. On the irrigated green of ranchland off Highway 385, a few big “Stetsoned” cowboys on horseback rode herd. Now, it was just us and a renegade tumbleweed on the open road, the long view of the Glass Mountains beckoning us westward toward the Gage Hotel. Now, the scene matched the one that I’d carried around in my head for years from some travel magazine.

“It’s Monday night. I’d better call the hotel and see what time last call for dinner is,” I said to Magellan. “It’s going to be eight o’clock before we get there.”

Here’s something I like about Texans. They’re plainspoken and matter of fact. If we wanted dinner at 12 Gage, the hotel’s restaurant, the woman on the phone politely said we had to be seated at a table by 8:30. Not much time, or water, was wasted on showering in Room 25 before dinner that night!

The Gage turned 90 last year. It has a nostalgic feel; imagine nights spent with a mannerly grandfather talking about the past. 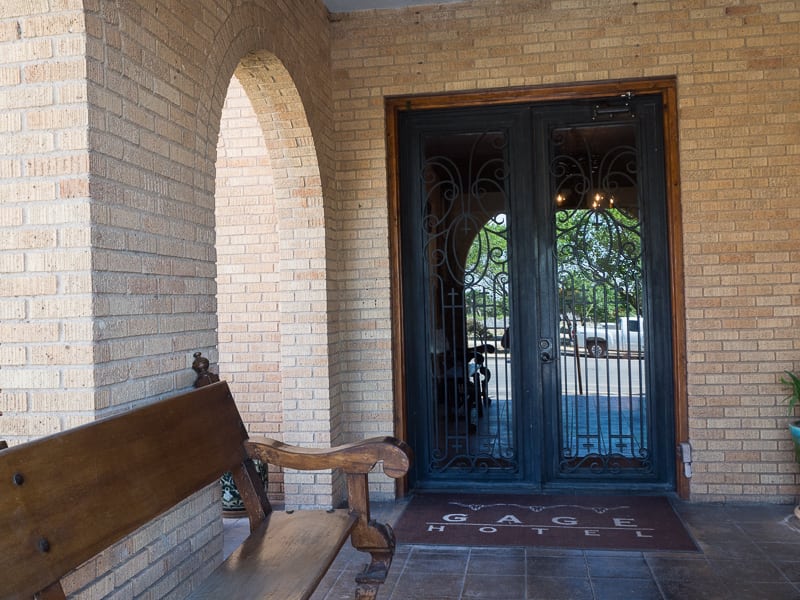 The brick, reflecting the palette of the Chihuahua desert, was fabricated in Marathon

Another invitation to sit awhile

Marathon began in 1882 with the building of the railroad to haul cattle and sheep to market for the local ranchers. Even back then, ranches in Texas were big. Like the one belonging to the Gage brothers, who came out west as teenagers and amassed 500,000 acres. By the 1920s, the people of Marathon realized the town needed a hotel and because Alfred Gage wanted a place where ranch visitors and cattle buyers could stay, he agreed to finance half of the cost. The two-storey hotel with its textured buff-coloured brick, oak floors and beamed ceilings, opened in April 1927. Right from the start, the Gage was a success, although Alfred never lived to see it: he died a year after it opened.

Then came drought, the Depression and hard times. The Gage closed and went into ruin. In 1982,  J.P. Bryan and his wife Mary Jon purchased the Gage for $30,000 and began carefully restoring and renovating what is now an Historic Register Property. Today, in addition to three hotel buildings offering a total of 45 rooms, there’s the 12 Gage Restaurant, White Buffalo Bar, V6 Coffee Bar, a well-curated gift shop, rose gardens, ponds and a putting green. It’s been named the #1 hotel in Texas.

An interesting aside. In 2012, Magellan met with J.P. Bryan at his Torch Energy Advisors office in Houston. Remembering the office, Magellan says “it was a dual-use space where every square inch was neatly curated with historical artifacts, documents, and artwork relating to Texas and the American West.” (The 25,000 square foot building housed “The Visions of the West Collection,” containing more than 70,000 items.) He told Magellan he’d been collecting western art since his university days. A lot of his collection is now in the Bryan Museum in Galveston, but many similar items to what Magellan saw in J.P.’s office filled our room and the Gage Hotel. 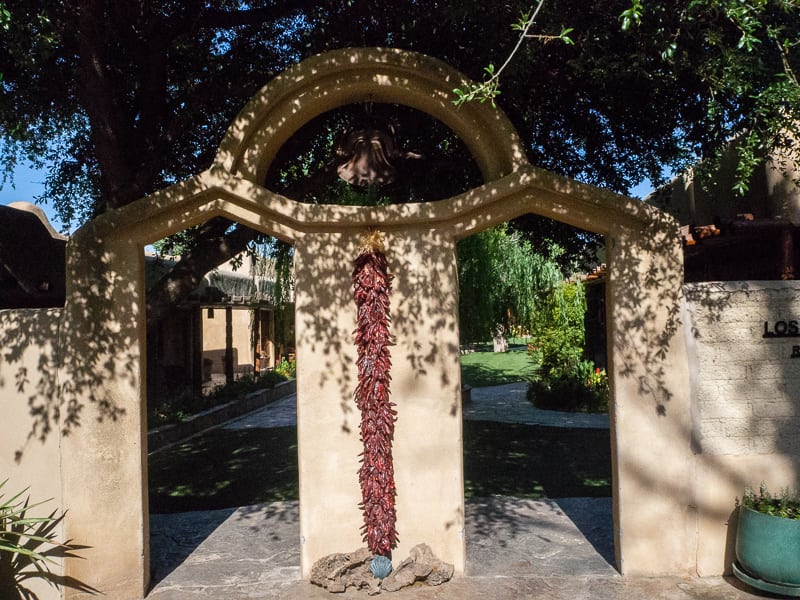 The invitation to sit awhile on the front porch 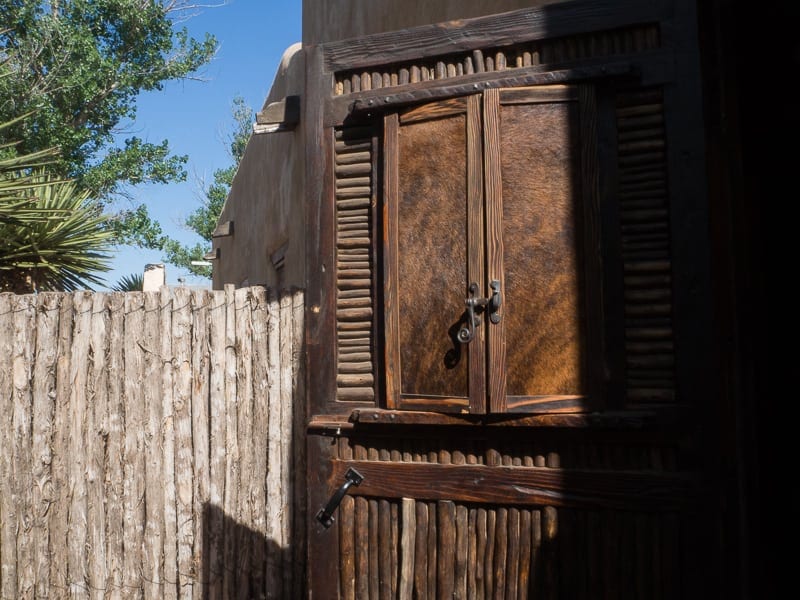 "Inevitable and natural, grave and beautiful"

Entrance to the 12 Gage restaurant

Room 25 is in Los Portales, (the porches—ours looked out to the main street and the east-west railroad tracks) a pueblo-style wing of adobe-brick rooms that ring a courtyard garden. Elegantly rustic, the spacious rooms honour the history of ranching with the likes of cowboy chaps hung on the wall, cowhide rugs and suede blankets. 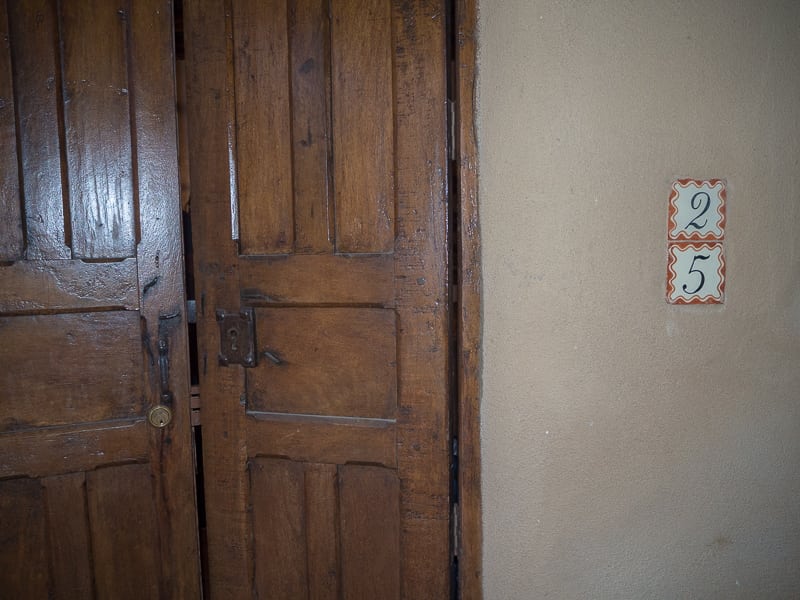 The key to authenticity 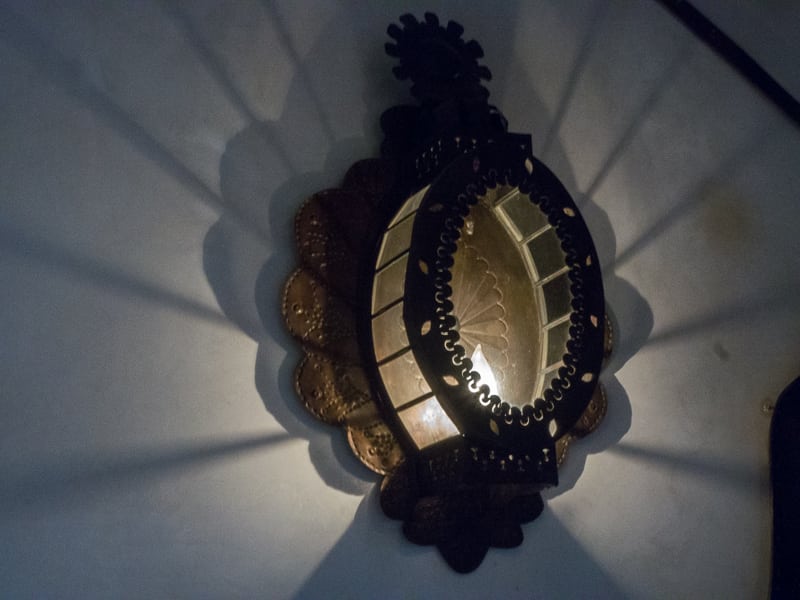 Shadows of the past

The front porch beyond

"The sheriff and his posse have just returned from travels far and wide. Just like all folks they need to rest a spell before to tending any official duties."

But we had no time to cowpoke around the room; we had to hurry to dinner. For Magellan, a gazpacho made from spring peas and cucumber served with garlic chips and a goat cheese flan. A grilled artichoke with a green-goddess dressing spiced with jalapeno and served with grilled lemon and bitter greens for me. And those were just the appetizers. For a main, Magellan ordered the half chicken with a potato/artichoke fricassee. “This sugar-cured quail is delicious,” I told our young waiter as I savoured every last crispy bite, “and adding chipotle to the Caesar salad dressing is spot-on local.” (I love how Rick Bass describes quail: “the haiku of poultry.”)  His farm-boy face practically grimaced. “I don’t know about the new chef,” he said respectfully. “I think the food has too much of an Asian focus. I prefer the cooking of our previous chef.” Clean-to-the-bone honesty, like the cattle skulls hanging in the bar. Where else but Texas?

Sure as shooting', you'll find something you like at the 12 Gage
(Photo: Yelp)

The 12 Gage wasn’t busy. A young couple that looked like honeymooners—maybe they’d been married at the Gage on the weekend as it’s a popular place for weddings. An older couple, maybe they were also on the way to Big Bend. But it was the two elderly ranchers seated near us who attracted our attention. Their belt buckles sparkled “good jewellery,” their cowboy boots signalled “hand-made” and their conversation said “ranch management.” When a local guy who works as a hired hand and country music singer went over to their table with his little dog, he was greeted politely and the three of them had a long chat. Maybe the two gentlemen were Gage descendants.

Under starry skies, we wandered back to our room. I awoke from a deep sleep, maybe the Southern Pacific was passing through, and started thinking about trains. For me, railroad towns have always had the scent of distance, paralleled with a longing for connection. Now, it’s often boxcars rumbling through western towns lonesome for the past. Not in Marathon. The Gage is railing its future on those who want to escape, and return to something akin to honouring the past.

The Gage Hotel is forty miles north of the entrance to Big Bend National Park. Don’t be like us. Get your money’s worth and arrive early to enjoy the property and see the town.

Here’s a good article from Texas Monthly about the Gage.

And here’s the story about the movie Paris, Texas, that reminded me of my long-forgotten reason for wanting to see this part of the world.

The Colours of Bill Frisell: Xanthous to Topaz