Were I four decades younger and had the means to live in any city in the world, the white cobblestones of Lisbon would be a strong contender for my wandering feet. Magellan agrees. Lisbon is in his triumvirate of top cities. But a decade from now, the seven hills of Lisbon could be too much of a challenge.

If we were living there, we’d have an annual membership at the Museu Nacional do Azulejo, now that we know it’s so intriguing.

From my diary: “Seeing the tiles, an undervalued art from, makes you understand what it means to be Portuguese.” J.S. (I wonder who J.S. is?)

Animals Hunting One Another, 1660

Close-up of Flowering Vases with Cherubins and Parrots

The Cortege of Neptune and Amphitrite, 1670

I really wanted to see the museum’s story of Portugal from the 15th century to today told in permanent and temporary exhibitions of tile art—”art squared.” Even though its location is a long way from the Alfama, where we were renting an apartment. Don’t make our mistake of walking there from Lisbon’s main core—you’ll spend two or three hours on your feet in the museum. Plus it’s a long way (Magellan thought it was closer) and a dog’s-breath of a walk.

The museum is housed in The Baroque Madre de Deus Convent (1509), chosen for its dazzling azulejos

Azulejo comes from the Arabic az-zulayj meaning “polished stone.” Azulejos came to Portugal from Valencia and Seville after King Manuel I admired them in Granada and decided they’d look exquisite on his palace. Tiles are not just eye candy on a building’s exterior, they help protect against dampness, keep homes cooler in summer and reduce street noise.

Azulejos didn’t become an art form until the 18th century when Portugal was producing more tiles than any other European country and craftsmen began replacing simple designs with vivid scenes from the Bible, the country’s Age of Discoveries and fictional portrayals of daily life.

The first tiles in Portugal were Islamic in style with grooves or ridges carved into damp clay. Smooth tiles surfaced in the mid-sixteenth century with the arrival of Italian artists who introduced majolica—painting a tin-oxide coating onto clay that also stopped colours from running.

The ubiquitous blue-and-white design we associate with Portuguese tiles was a major shift that happened in the late-seventeenth century, influenced by porcelain imported from China. All the major art movements are represented in the history of Portugal’s tile design: Baroque, Ricocco, Art Nouveau, Art Deco and Minimalism—even Namimoya, a pattern evoking the waves of the sea that appeared on tiles after the Portuguese returned from Japan in 1543.

Franciscan scenes from the Convent of Sant’Ana in Lisbon

The golden period of Portuguese azulejos

The highlight of the museum is Great Lisbon Panorama, a blue-and-white composition of 1,300 tiles showing Lisbon’s cityscape prior to the Great Earthquake of 1755. It’s the longest tile piece in the country at 53 metres and occupies an entire room.

Details of this room-size art

Grand it is, but other pieces, a mishmash of ancient, quirky and contemporary—like “The Chicken’s Wedding”—considered “one of the most profane commissions of azulejos in the 17thcentury”—drew us closer.

The full title of the piece is Singerie: The Chicken’s Wedding. A singerie is a “monkey trick,” a whimsical scene in which well-dressed people are replaced by impish monkeys.

There’s the monkey coachman driving the wedding carriage of the bride (she’s wearing white!), green monkeys carousing around it, a pair of elephants leading the procession and a half-monkey half-rabbit in a headdress relieving himself. Moving in the opposite direction is a simian band playing musical instruments.

It’s said Manuel Francisco may have painted this as a satire criticizing the defeated side of the War of Restoration (1640-1668).  In fact, he designed it for the country estate of a Lieutenant-General of Artillery of the Kingdom. In his will, the artist said the officer owed him money—which makes the singerie even more amusing.

Here are some of our contemporary favourites.

Section from the covering in the Avenida de Ceuta, João Abel Manta, 1970-72 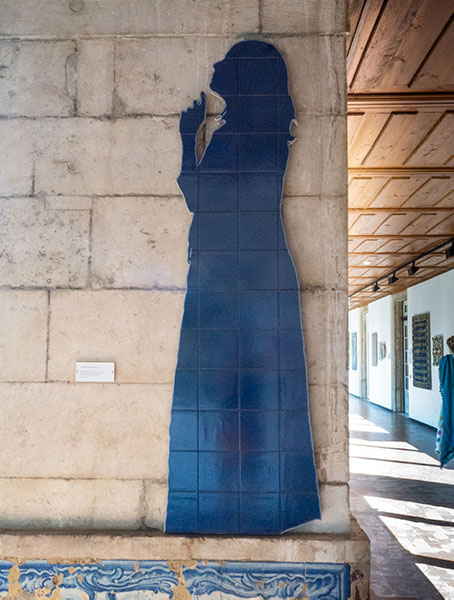 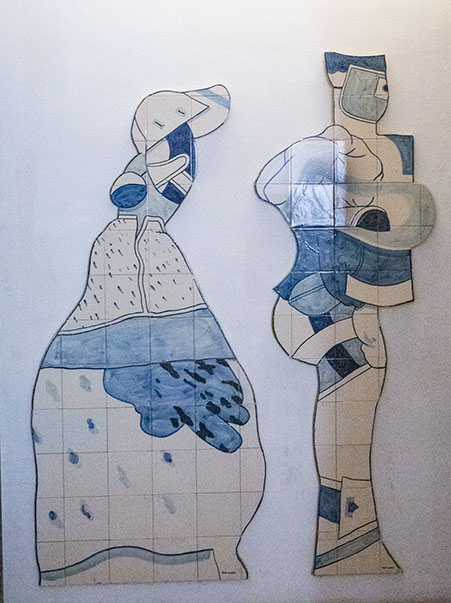 Contemporary take on blue and white

The day grew long as Magellan and I admired tiles, our cameras warm to the experience. The only interruption was a stop at for lunch at the museum café (artfully tiled).

Lunch: Pork with Pineapple or Codfish au Gratin with Pine seeds and Raisins?

When I look back at these photos, I imagine us as forty-something Lisboans, spring chickens spending Sunday afternoon among the azulejos, still laughing about the wedding…

UPDATE: Check out this artist’s contemporary twist on azulejoes.

Fideuà: Spain in a Bowl
Scroll to top