Spraying a dab of perfume on myself this morning made me think about camels.

“Camels, I like,” said Aubed, our guide in the Empty Quarter of Oman. “I own some with my cousin.”

“Very smart animal. Call their name, they come. Camel milk I like. The meat, too.”

“Do you think we’ll see any camels out here?” I asked Aubed.

“One family still has some. Maybe on the way out.”

Dhofar in southern Oman is the birthplace of global trade in aromatics: incenses, culinary spices, curative herbs—and perfumes—all thanks to the camel.

As early as 2800 BC, camel caravans from Oman (called Arabia Felix then) travelled north to Mesopotamia where the Omanis traded their aromatics for staples they couldn’t easily grow, like barley, lentils and chickpeas.

Camels are well suited to long-distance travel in the desert. What other animal can go without water for up to a week? With its long, graceful legs, a camel’s body is high above the reflective heat of the desert so it stays cool. Its brow ridge and eyebrows act like a built-in sun visor. Coquettish eyelashes and unique nostrils close when the wind burquas its face with whirling sand. Weirdly, the camel has a third eyelid that moves sideways and front to back like a windshield wiper brushing the eye clean of sand. Even in blinding sandstorms when this eyelid is closed, the camel can still see and carry onward.

Aubed knows the Empty Quarter so well that I think he made sure we saw camels on our last day with him.

When we caught a distant glimpse of camels wandering the desert, we were as excited as safari travellers seeing lions.

Swan sway of a camel's neck

Delicate traces in the velvet sands of the Empty Quarter 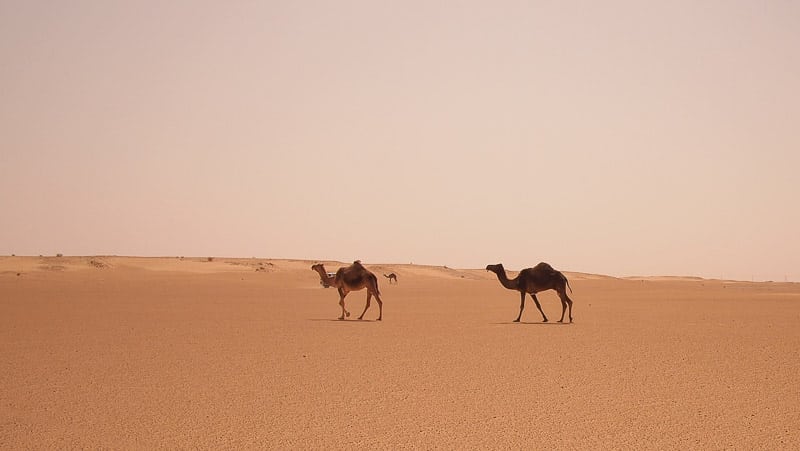 Magellan and I had seen a few first camels alongside the road between Ras Madrakah and Al Jazir. But seeing them in the Empty Quarter made us feel like Lawrence (and Lucy) of Arabia.

“Are they wild?” we asked Aubed. He said no, they belonged to a family who lived quite a ways away. He also told us that camels return home of their own accord.

By 100 BC, the people of Dhofar were wearing silk sashes, sleeping on muslin sheets and serving pomegranates on silver plates, all from China. Camel historian Daniel Potts says “If the Silk Roads became the bridge between the cultures and cuisines of the East and West, the Bactrian camel became the locomotion across that bridge.”

Having two humps, the Asian Bactrian camel can shoulder a few hundred more kilograms of goods than the one-humped Dromedary the Omanis of Dhofar domesticated. In the end, even that didn’t matter. As more goods were transported by sea and aromatics lost their cachet, a swansong played out for camel caravans. Now there are only 60,000 camels in all of Oman.

After visiting the Empty Quarter we spent a few days in Salalah, the largest city in Dhofar. Early one morning, we went to the archeological port of Sumhuram, a UNESCO site that in classical times was full of merchant ships. After seeing the ruins and the little museum, we drove the short distance to Khor Rori, a two-kilometre-long lagoon sealed off from the old port by a sandbank. It’s a haven for birdwatchers and I was keen to take photos of the Greater Flamingo with its pink-tipped wings. Waiting patiently for them to lift off, we watched a farmer leading a few cattle to drink, a fisherman carrying his rod over his shoulder—and then, camels! Walking toward us!

Eye-to-eye with camels in the wild, we were surprised at how friendly they were. And how graceful, their nonchalance cadence as silent as a ballerina. And they hear like a conductor. When Magellan tiptoed closer with the camera, they immediately turned their heads toward him.

A camel lurches like a donkey and sways its neck like a swan…nothing has a more singular grace than this melancholic animal.

The herd at Sumhuram seemed happy, not melancholic. They’d found the oasis in an ancient city their ancestors helped to make famous.

Wild Camping on the Beach at Ras Madrakah and Ras Shuwaymiyah

For the Smell of It
16 replies

Spiralling Thoughts on the Prairie Highway
Scroll to top