The Great Bears of Hyder, Alaska & Stewart, B.C: The World’s Greatest Bear Display that you can get to by Car

Calls for a BC road trip, right?

We’d never heard of Stewart or Hyder until last July. Waiting for the floatplane to return to Oceanlight II, we got to talking to newly arrived guests, a young couple from northern BC. “Any place we should be sure to see on our drive back to Vancouver?” we asked. They suggested that after the ferry from Haida Gwaii dropped us in Prince Rupert that we drive 450 kilometres north to Stewart to see amazing glaciers and an abundance of bears—even Kermode bears, the provincial mammal of BC.

Let’s start with the super, unnatural relationship between the communities of Stewart, BC, (on the Portland Canal, Canada’s most northerly ice-free port) and Hyder, Alaska, two miles down.

Hyder is the easternmost “town” in Alaska, physically cut off from the rest of the state by an impassable wall of the Coast Mountains. It has no Customs House—Magellan and I drove right in, the road diminishing from asphalt on Highway 37A to the dusty hard pack of Hyder’s Main Street. Not so easy on our way out. The Canadian border guard asked the usual questions about guns, alcohol and up here—bear spray. When the post is unmanned between midnight and 8 am, drivers headed into Canada pick up a yellow phone to speak to a remote customs officer who decides whether or not to raise the mechanical barrier.

Hyder has no grocery stores, no police (the Stewart RCMP answers calls in Hyder) and no property taxes. Most of its services—including electricity—come from Stewart. The kitchen clocks in Hyder are set to match Stewart’s, an hour ahead of the rest of Alaska. Until recently students from Hyder crossed the border every morning to sit at desks in Stewart because in Alaska, a community needs a minimum of ten pupils for a school. Super-nice neighbour up here aren’t we, eh? Too bad BC doesn’t treat our bordering province and the ROC with such empathetic wisdom.

Hyder has only 85 residents; Stewart about six times that. A century ago Hyder and Stewart were home to about 10,000 people when incredible mineral wealth led to the development of one of BC’s richest deposits of gold and silver. The collapse began in 1928 when a fire devastated Hyder. Followed by the 1929 financial crash. Then WWII. The discovery of copper in the 50s caused a short-lived revival in Stewart. This area gets some of the heaviest snowfalls on earth, averaging about 2000 centimetres/800 inches annually. An avalanche in 1965 claimed the lives of 27 miners and wiped out the camp.

In any case, we drove up here for glaciers and bears.

The river, silted by seasonal runoff from the Cambria Ice Fields

Cataracts on the Salmon River

A fine veil of river mist 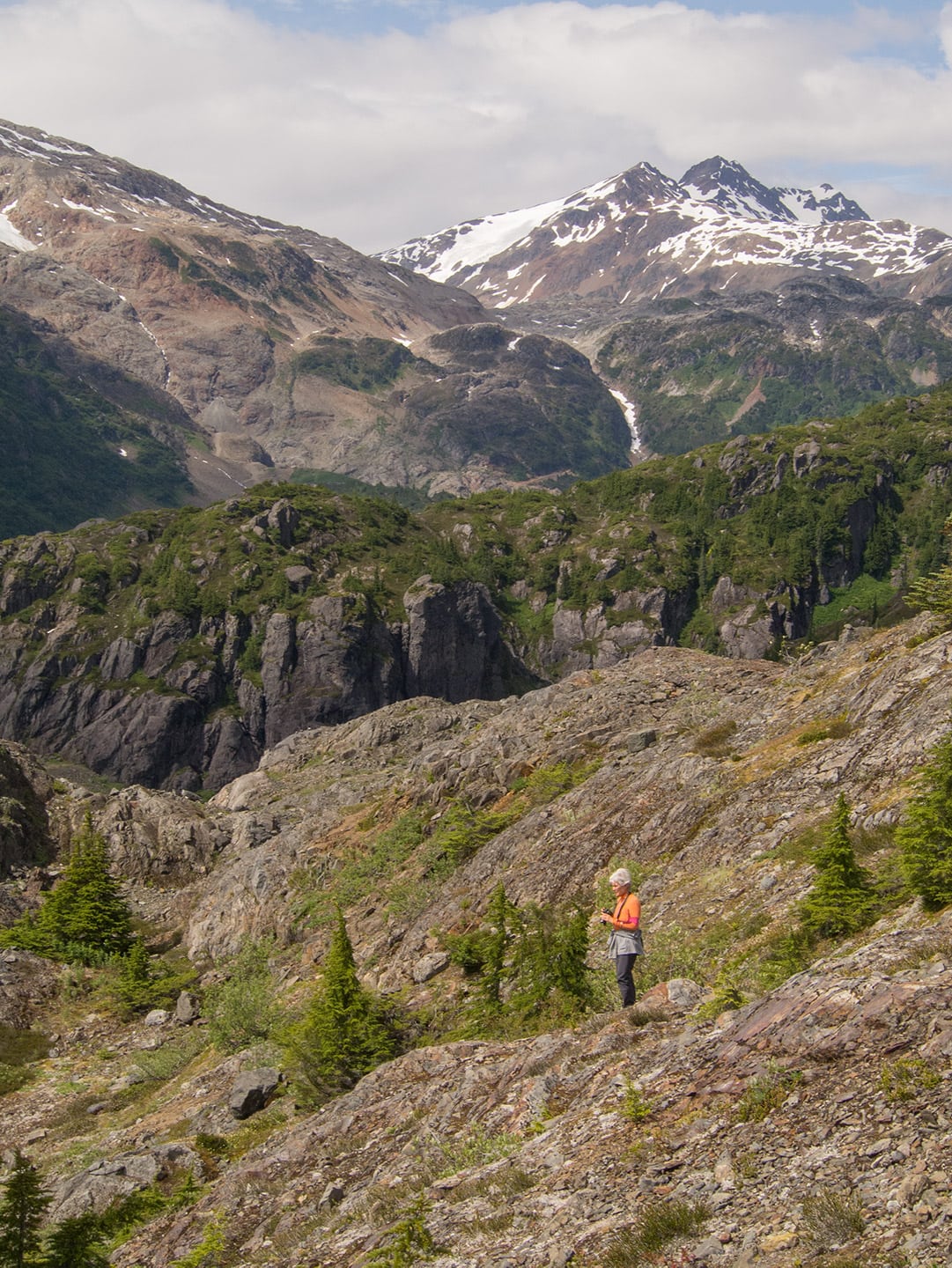 Sharing a chamber of commerce, Stewart and Hyder have produced a great self-guided auto tour for the Glacier Highway for the 100,000 visitors a year who come here. We found it most helpful. How else would we have known we were back in BC at Stop 10 (Premier Border Crossing/Silver Heights where there was a Canada Customs building until the 1950s), or identified Bear River and Bear Glacier?

Magnificent, the glaciers were magnificent.

Landscapes from several periods of glaciation, the last 14,000 years ago

Terminal Moraines at the Toe of Salmon Glacier

Salmon Glacier is the fifth largest in Canada

At the Toe of Salmon Glacier sitting in his car was “The Bear Man,” Keith Scott, author of the book The Great Bears of Hyder, Alaska & Stewart, B.C: The World’s Greatest Bear Display that you can get to by Car. Keith spends May through September in this area, selling his books, postcards and CDs. He also gives tours—maybe that’s how to see a bear up here.

Without the brochure, we wouldn’t have known that bears come to feed on the salmon that spawn here from July to September. “It’s a bit early in the season but a bear was spotted here last night around nine o’clock,” the ranger told us.

Now where to camp so we could return later that night?

Exploring, we drove down a creekside road that fast narrowed to the point that willow branches tickled Rove-Inn’s sides. I found a turnout where we could camp but Magellan wasn’t so tickled about the potential of grizzled, clawed neighbours. We drove back to Hyder, to Camp Run-A-Muk.

By nine o’clock about forty of us had bought tickets and were lining the viewing area at Fish Creek. “Camera-ed” and quiet, we waited calmly as the light greyed and the evening cooled. We were entertained not by BC’s national mammal but by Canada’s, fascinated by watching two industrious builders dragging large branches to their dam.

Waiting for the show to begin

The only furry creature we saw that night

In the end we did spot a lone bear by the side of Salmon Glacier Road.

Scott, Keith Vincent. The Great Bears of Hyder, Alaska & Stewart, B.C: The World’s Greatest Bear Display that you can get to by Car. UK: Hancock House Publishing Ltd, 2001.