Faro Cabo Vilán, one of the few lighthouses where the tower and keeper’s dwellings are linked by a tunnel

Have you heard about the Costa da Morte on the Galician coast of northwestern Spain? Until a few months ago when planning a hiking trip to Spain’s Picos de Europa combined with our first visit to Portugal we hadn’t. Looking like a jagged heart atop Portugal, the Costa da Morte seemed like a good waypoint. Instead, it was a highlight—the subject of our first blog about this five-week trip. Life in Camariñas, the town with slogan The Heart of the Death Coast, grabbed us by the heartstrings.

Driving the excellent, high-speed mountain highways to get there through traffic thin as a sardine and fog white as a slice of codfish was easy. Especially compared with approaching by sea from the Atlantic in the old days along this rugged coast where the many shipwrecks gave the area its deadly name, Costa da Morte. Just ten kilometres outside Camariñas is the Cemiterio de los Ingleses, named in memory of the English ship, The Serpent, which went down here in November 1890, carrying with it 172 of its 175 naval crew. Seeing the Cemiterio de los Ingleses reminded us of Gordon Lightfoot’s lyrics: “That good ship and crew was a bone to be chewed/When the gales of November came early.”

Faro Cabo Vilán (125 metres high), built to replace the poorly located lighthouse after the shipwreck of The Serpent, was the first lighthouse to run on electric power

Back in 1933, Cabo Vilán and its adjacent islets were declared a Natural Site of National Interest

I’d been telling people that we were going to be staying in the one-slice-short-of-a-hamlet Lugar do Cotariño, with only three buildings, now all owned by the Hotel Rústico. The surprise for us was that Lugar do Cotariño is on the outskirts of Camariñas, rural but not remote.

Here's the hamlet in its entirety, scented by a forest of pine and eucalyptus and backed with fields of corn

Our room, "The Alcatraz"

Lugar do Cotariño's hórreo, a narrow granary from one-to-ten metres in length that was used to hold and ripen farm produce, especially sweet corn, their mushroom-shaped legs supposedly a deterrent to rats (our brother-in-law Vern says “No way that'll work”)

Alberto, young and handsome in in his rose-coloured sweater with navy sailor stripes, explained how his dad bought the property from a woman named Valentina who had lived on it all her life (1900-2003). Valentina’s photo graces the reception area in the main building, a stone structure dating back to the 1700s with a communal oven used by the four families who lived in Lugar do Cotariño. Alberto’s dad, a designer who fell in love with the place 40 years ago, restored the main dwelling where Valentina was living and reconstructed the other two buildings using some of the original stonework from their ruins. Alberto joined his dad in the business in 2011. “You will be in Alcatraz, the bird not the prison,” said Alberto. We loved the blend of tradition and contemporary, style and comfort. The original Galician fireplace in the reception area, the common room, the old-fashioned light switches… “Where you sleep?” the manager at the Repsol station asked us. “Good people,” he said.

Alberto gave us much good advice, beginning with lunch at Puerto Arnela in Camariñas. Rustic bread. Clams in a flavourful sauce of tomatoes, olive oil, spices and breadcrumbs. Perfectly cooked hake, likely caught that morning. “This fish is as good as at Fleur’s Place,” I said to Magellan. (Remember the story “Fossicking?”  We returned for langoustines cooked on the plancha the following night. And because Camariñas, a working town of around 5,500 people, is relatively isolated (you have to drive eight kilometres away for fuel for example) and unspoilt (no souvenir shops), the cost was less than we’d pay in Vancouver for two lobsters to cook at home. And oh, the taste—ocean sweetness!

Then there was the very ordinary cafe with a thin, apple-intensive pie with no upper crust in the window that lured us in for a second breakfast. “I’m glad you liked it,” said the man behind the counter, “I made it myself this morning.” (In Camariñas, people speak Galician, a mix of Spanish and Portuguese that Alberto says is “really more like Latin.” And yet we found a lot of people, like this guy, who spoke English as well.)

But let’s get back to the most important advice Alberto gave us.

“We have the most wild and beautiful beaches in Galicia,” said Alberto. “But you don’t need to walk the Death Coast or Coastal path. They’re too long. My advice is to see Faro Cabo Vilán, the lighthouse, and then drive along this road, park your your car and walk along the beaches. My favorite is Treche near the Cemiterio de los Ingleses, which you must see.” 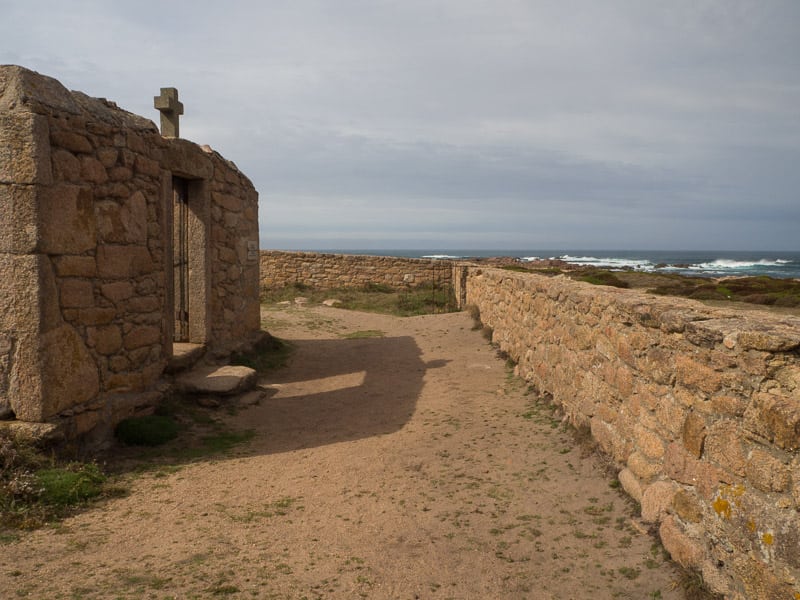 I call our five weeks in Spain and Portugal "the purple flowers trip," even here on the coastal walk to Trece Beach

Wild, clean and stunning, Trece Beach is the largest nature reserve in Galicia

Mount Branco is the highest sand dune in Spain (150 metres)

Like Tofino and Ucluelet in BC, the rocky headlands around Camariñas soften into inlets of crescent-shaped sandy beaches. We spent hours (not habitual for us) on the sun-warmed beaches of Predrosa, Balea and Reira—and even more on Treche—sharing them with two or three other people in the glowing afternoon light of late September. Remote. Enchanting. Captivating.

With her jumble of blocky buildings, Camariñas may not win Spain’s Most Beautiful Village. But she’s got a depth of unvarnished, authentic beauty. Her harbor around a halfmoon bay leading to the marina via a timber boardwalk with metal railings angled to the sea draws you toward the town’s fishing boats, to an industry that’s still important.

Bringing in the catch to Camariñas

Not like in the mid-17th century when Camariñas was the major port for sardines from the Atlantic and Cantabrian coastlines. Back then, sardines were salted in barrels and shipped to the Basque country in exchange for iron.  In an entry from 1753 in the Registry of the Marqués de la Ensenada, this process is described as “the way of fishing the sardine in the village of the bobbin lacework.” 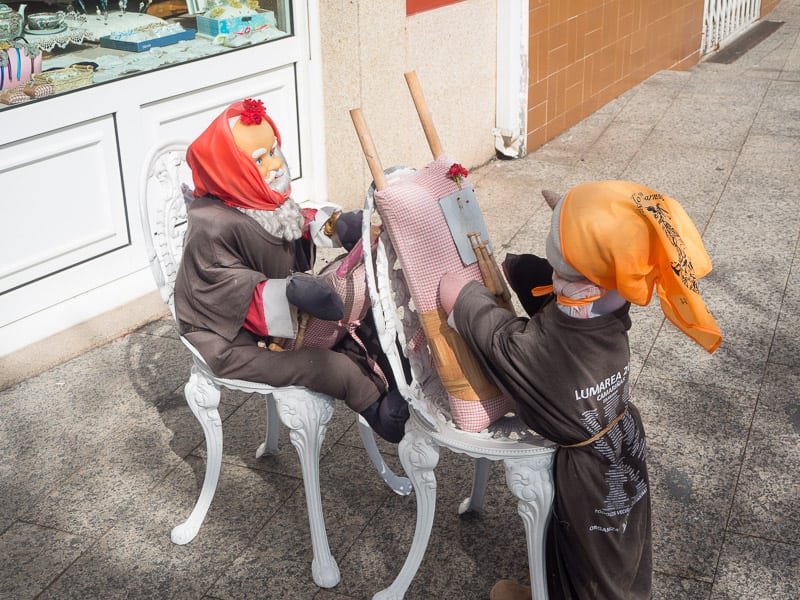 The only male palilleira we saw in Camariñas

Bobbin lacework display at the Museo do Encaixe in Camariñas

How do they do it?

Another highlight! Centuries later, Camariñas is still renowned for its local palilleiras (bobbin lace makers): 60 percent of the lace made in Galicia comes from here. We found about a half dozen shops specializing in intricate cotton and linen lacework, which is also on display at the Museo do Encaixe. Seeing the women at work in groups was fascinating. The click clacking of the pegs they tossed about with great speed with their dextrous fingers outpaced the sound of their voices as they chatted away, seemingly oblivious to the delicate patterns of lace emerging from their work. Since 1991, lace makers from around the world have been coming to the International Camariñas Bobbin Lace Fair, held annually during Holy Week.

We took Albert’s advice and drove 15 kilometres along the coast (“It’s not marked on the map but there’s a road here…”) to the village of Camelle to see the work of “Man.” Manfred Gnädinger moved here in 1962, lived in a concrete hut on the spit and began creating art exclusively from the remains of the sea: stone, wood, animal skeletons… He charged visitors to his outdoor sculpture garden a small fee, his only income, and asked them to draw something for him about their visit in his small notebooks. As Alberto told us, “Man” died of heartbreak a month after tons of oil from a tanker that wrecked nearby in 2002 desecrated his home and art.

The postcard hamlet of Arou

The house (in March 2017 local authorities approved the funding for restoring it) where “Man" lived, dressing in only a loincloth and letting his hair and beard grow long

Fifteen years later, you can still see the grim effects of the wreck of the oil tanker here

Can you see why we got hooked on this place?

Our visit to Camariñas reminded me of a quote I read that came from Sylvia Plath’s diary about a day she spent on a wild beach.

From this experience I emerged whole and clean, bitten to the bone by sun, washed pure by the icy sharpness of salt water, dried and bleached to the smooth tranquility that comes from dwelling among primal things.

Here’s the town of Camariñas’s website info about the Museum of Encaixe (bobbin lace).

The Hotel Rústico’s website shows you more of the beauty of this property.

We’d have liked to see The Man Foundation, which is dedicated to conserving and displaying “Man’s” work, but it was closed. However, the Foundation has a very touching website about “Man.” The Camariñas town website has info about “Man” as well. There’s also a good blog about “Man.” Even BBC did a profile on him.

You can see more info about Faro Cabo Vilán here.

The Walk by Goat Horn River

The Most Wondrous Temple in the World
8 replies