One of our favourite local seafoods is spot prawns. They’re the largest commercial species of shrimp found in the Pacific Ocean off Canada’s west coast, about as long as a green bean and as fat as a young carrot. Sweeter and more delicate in taste than most shrimp, they’re recognizable by their bright orange colour and distinctive white spots on their back. Because spot prawn season is so short—about six weeks in May and June, shorter this year—they’re even more of a delicacy that we eagerly look forward to eating and cooking.

A dozen years ago, 90% of BC’s spot prawns were exported to Asia. That changed with Robert Clark, who was then executive chef at the renowned C Restaurant in Vancouver. As Alexandra Gill writes in the Globe and Mail,

“He knew that farmed tiger prawns were bad for the environment and often tasteless to boot, so he took them off his menu… Two years later, he was out on a boat with his friend Steve Johansen, the owner of Organic Ocean Seafood, complaining about how he couldn’t source any premium spot prawns. ‘If you’re serious about this, I’ll buy a spot-prawn licence,’ Johansen said. In 2006, Organic Ocean became the first commercial fishing operation to serve the domestic market exclusively.”

In that same year, Robert initiated the Spot Prawn Festival at Fishermen’s Wharf. While it’s only a ten-minute walk from our house, Magellan and I must confess that we’ve never gone to this annual event. The crowds (up to 2,000 people) stretch along the seawall to sample delicacies like Spot Prawns in a Cardamom and Kumquat Broth prepared by local chefs like Frank Pabst at Blue Water Café. Instead of attending the festival, we walk over about 3 pm on weekdays when Steve’s boat comes in with the day’s catch.

At first, we had Steve behead our spot prawns. Until we realized we were throwing away mouthfuls of flavour. Unlike true connoisseurs of spot prawns, we still don’t eat their succulent heads in the raw, but have discovered they’re pretty tasty when deep-fried. But now we do pull on our rubber gloves (spot prawns have sharp telsons on their tails), twist off their heads and pop them into the stockpot. And we do eat spot prawn sashimi. Last week at Octopus Garden, a great sushi place (and only a few blocks away), we also tried what’s now my new favourite way to enjoy spot prawns at a restaurant: lightly barbequed nigiri.

An easy way to enjoy spot prawns at home is to simply pour boiling water over them, let them sit for five minutes, and then peel and eat them with your favourite sauce, a loaf of crusty bread and a green salad.

But for the last five years at Casa Magellan and Spice, our favourite way to prepare spot prawns is in a paella, a recipe by Erik Akis in the Victoria Times Colonist. We’ve adapted it for two people, but use the same quantity of spot prawns: one pound. It may seem like a lot of protein for two people, but a pound of spot prawns, after removing the heads and shelling them, doesn’t amount to that much. That being said, we’ve served this as the last course in a Spanish Tapas dinner by just doubling all of the ingredients except the spot prawns. 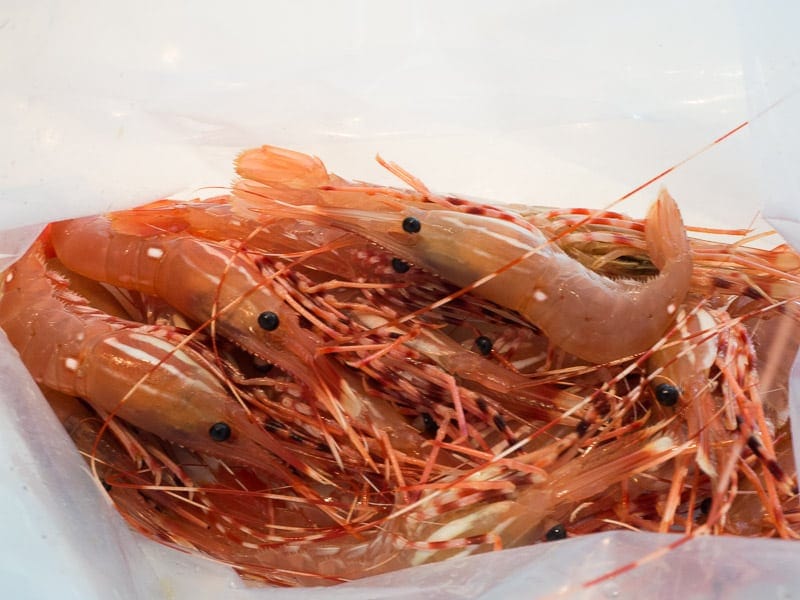 A healthy spot prawn has a translucent colour, is firm to the touch and has a tail that's not curled under

Using kitchen scissors, cut slits the spot prawns to make them easier to peel and eat

Use the heads to make a spot prawn broth 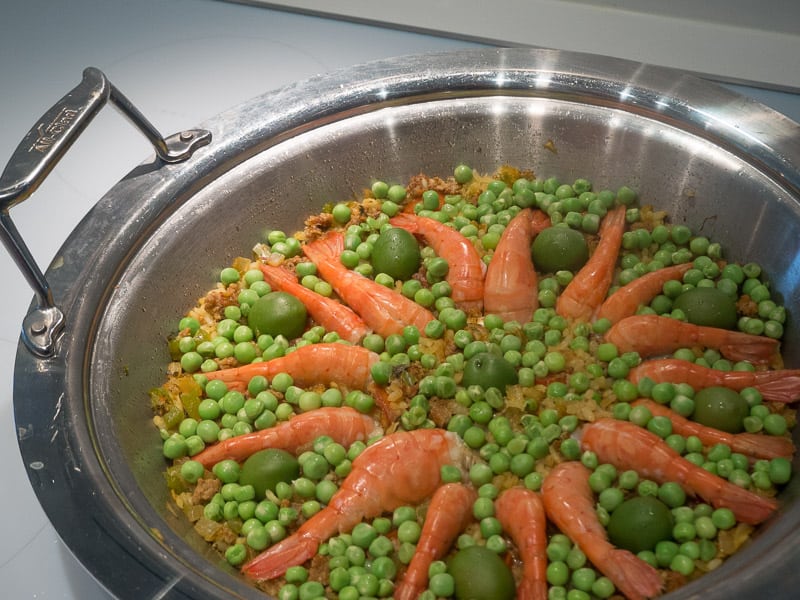 Erik’s recipe calls for chicken broth instead of making one with the spot prawn heads—I think the latter adds more flavour and it pleases my Scottish/Ukrainian sense of frugality. (Magellan and I differ on whether you need to add salt to the spot prawn broth. You do.)

We also triple the amount of peas (and use fresh ones—it only takes ten minutes to shell them) and double the volume of peppers and onions (jubilados need their veggies). And I prefer the buttery taste and plump green of castelvetrano olives to the salty bitterness of black kalamatas.

“Well and good Spice,” you Saskatchewan readers may be thinking, “but where am I going to find fresh spot prawns?” Buy frozen ones. Substitute shrimp. If they’re headless, stick to chicken broth or try clam juice. “And fresh peas in June?” Use frozen ones or wait until they’re plump in the gardens in your part of the world to make this dish.

True paellas go into the oven. While this recipe is strictly stove-top, you’ll still get a little socarrat, the crispy, caramelized bottom that characterizes a fine paella.

Spot prawn season is almost over—so as Janis Joplin said, “Get it while you can.”

You can read more about the Spot Prawn Festival here.