Living up to my blog name "Spice"

“I ran down to your place this morning and stole juniper berries from your kitchen—couldn’t find them anywhere on our way or earlier grocery travels yesterday.” Yikes, I thought when I received this message from Lynn when we were in Norway. Long overdue for a cleanup, my spice cupboard was a bit of an embarrassment. Last week in a rare burst of housecleaning energy, I tackled the job. “A good thing” as Martha would say. Three good things actually—a tidy drawer, a blog source and a new recipe.

I know what you’re thinking. “No wonder she calls herself Spice. That’s a crazy number of tins, jars and packets in that spice drawer!”

Uh-huh. What’s more is there is more—my various salts and peppers couldn’t be crowded into the spice cupboard so I’ve moved them elsewhere.

Sorting and cleaning, I realized how our travel has influenced my collection of spices.

Rose Petal Powder from the wondrous world of spices at Kalustyan’s in New York, purchased in May when we visited Myra and Alan.

Marfa Shag, “an herbal smoke blend” of rose petals, damiana, mullen and chamomile—is this a tea? From Penzey’s in Palm Springs: Chipotle Pepper, Epazote and Mahlab. What’s Mahlab I wondered. A powder made from the rock-hard pits of the Mediterranean’s St. Lucy’s cherry. Serious Eats says, “When mahlab first hits your tongue it tastes a bit like cherries, a bit like roses, and a bit like almonds. There’s a hint of vanilla and something quite floral…It’s a regal spice that adds majesty to sweets, an excellent mystery ingredient that contributes a whole palette of flavors without dominating an end result.”

I found a packet of Mastic from Greece, purchased in 2010, reminding me of the mastic ice cream we made for dessert for the first dinner we cooked for Teresa and Paul.

A tin of Stevia from Sicily, unopened. A dinner guest once told me she substitutes it for sugar for her son Matthew. That kid is brilliant, so…

From The Silk Road Spice Merchant there’s a jar of Turkish Baharat purchased in Seattle, likely soon after we returned from Oman. It’s an Arabic blend of black pepper, paprika, cumin, coriander, cloves, mint, rose petals, nutmeg, cinnamon and cardamom. (I know you’re supposed to toss spices out after a year—doesn’t happen in our household.)

Even older is a French-green tin of Quatre Épices that I bought in Toronto. We haven’t been there for six years! Perfect for pork dishes is this mix of ground white pepper, ginger, nutmeg and cloves.

What grand memories of hiking in Utah when I found a slickrock-coloured packet of Backbone Girls Chimayo Chile Powder.

Savoury from my mother’s garden.

The perfume of reorganizing your spice cupboard

Fennel, its taste like honeyed wind blowing through a field of wildflowers 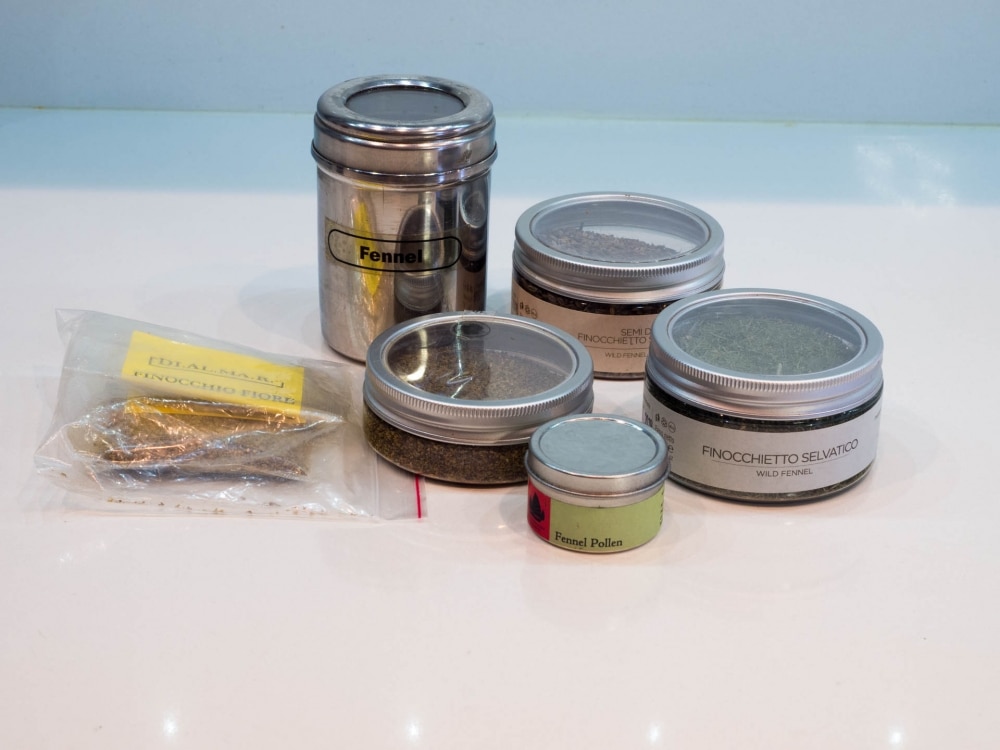 Roman ladies chewed fennel seeds as a means to stop getting fat...

Dust rose petal powder on a dessert plate, a cake, a salad of dates and oranges...

Add it to a lamb tagine, to your Christmas baking, to rice pudding… 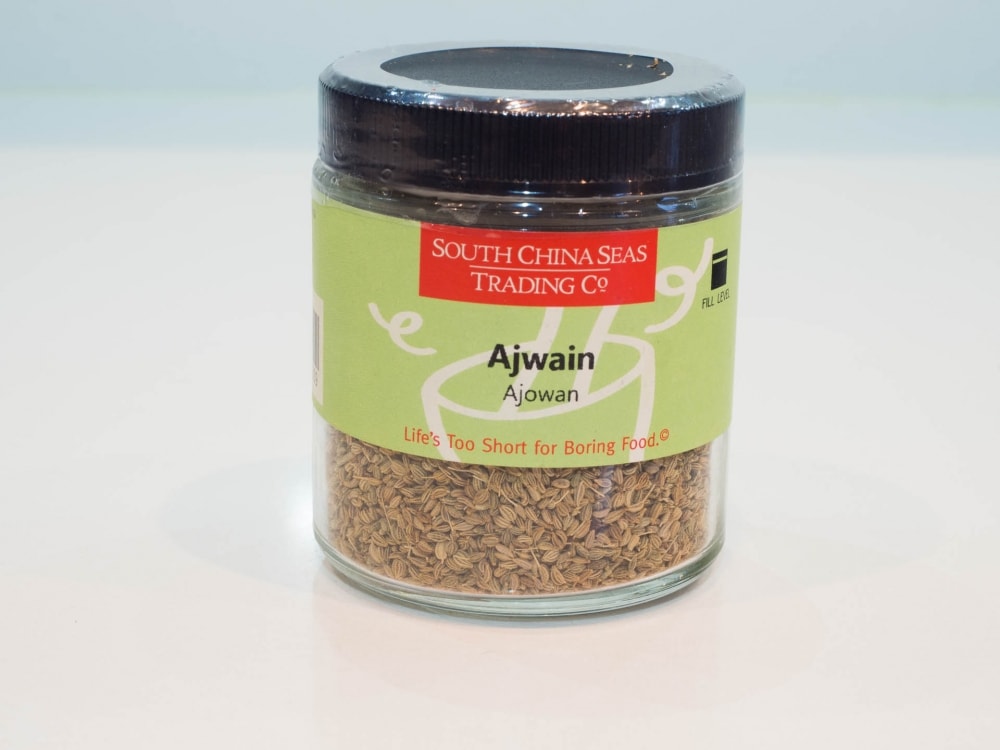 Also known as ajowan caraway or carom, I dry roast it for spicing Indian curries

But what astonished me most was all the fennel in that drawer. A tin of fennel seeds and a packet of fennel pollen purchased locally. Three tins of Finocchietto Selvetica and another of Fioride Finocchietto—wild fennel seeds, leaves and pollen purchased at Gli Aromi in southeastern Sicily, an herb farm where 200 different kinds of aromatic and medicinal plants are grown and shipped worldwide. “31 OTT. 2019” read the pale green label on one tin.

Magellan can expect to have fresh-smelling breath in 2020 because he’ll be eating a lot of fennel seeded/powdered dishes. Its principal flavour compound is trans-anethole, which The Flavor Thesaurus says is thirteen times sweeter weight-for-weight than table sugar. Luckily fennel is used in savoury and sweet recipes in almost every country’s cuisine. My favourite Italian meatball recipe calls for fennel seeds. Greek cookbook author Aglaia Kremezi has a recipe for Crisp Parsley and Fennel Bread Rings that I’ll be trying because it uses a whopping tablespoon of fennel seeds. Vij, a renowned Indian chef in Vancouver, has a recipe for Candied Walnuts that includes fennel seeds, cayenne and bonus!—ajwain, an unopened jar of spice in the first row of my cupboard.

Recipe adaptations to deplete my store of Finocchietto Selvetica must be the priority, as you can well see.

Here’s where I started.

A delicious recipe that we've simplified

My favourite restaurant in our city is Burdock & Co, owned by chef Andrea Carlson, who this autumn published her first cookbook. When we returned from Norway, Lynn gifted me Burdock & Co Poetic Recipes Inspired by Ocean, Land & Air for my birthday. It’s a treasure. Andrea’s story, the photographs and her recipes—six of them call for fennel! Immediately I went to Warm Ricotta, Caramelized Persimmons, Honeycomb. I was in luck. Our local farmers’ market had fresh persimmons and honeycomb. While Andrea’s recipe calls only for fennel fronds and flowers not fennel seeds, I know she would cheer my adaptation, which also uses honey instead of caramelizing sugar. “…spontaneity colours all that she does in the kitchen. Rather than revisiting past recipes, Carlson prefers to create dishes on the fly—scrawling down details on scraps of paper, led by the product at hand,” writes Laura Brehaut in her National Post review of Andrea’s cooking.

Local persimmons, smaller and less intense colour than those from California

A sweet, honey-like flavour and a star-burst pattern

My first attempt using caramelized sugar—honey is much simpler

For a Christmas holiday breakfast, add a slice of your favourite stollen

I plan to serve Warm Fennel-Spiced Persimmons, Ricotta & Honeycomb for dessert but also for breakfast—maybe an entire dinner party will be planned around my most abundant spice. You could help—send me your favourite fennel spice recipes!

Save Print
Prep time
8 mins
Cook time
2 mins
Total time
10 mins
Adapted from Andrea Carlson's recipe in Burdock &Co, I have added fennel seeds to the persimmons and unlike Andrea, opted for store-bought ricotta instead of making my own; Scardillo makes a traditional Italian ricotta with a nice texture. Be sure to buy Fuyu persimmons, which can be eaten firm and crisp; the Hachiya variety is too soft. (The BC Fuyu persimmons are small; as you can see in our photo, I used five slices per serving.) Instead of crystallzing a small amount of sugar as per Andrea's recipe, I substituted honey. I've made it for two, Andrea's recipe is for four and it could easily be multiplied for six if you use a large pan.
Author: Spice
Serves: 2
Ingredients
Instructions
3.5.3251

Gli Aromi, if you happen to be in Sicily and want fennel…

The Easter Bread Architecture of Community

The Wildflowers of Lo Zingaro

One of the Most Spectacular Churches in the World—Monreale—Mon Dieu, is this Real?

Pantalica: Paradisical Necropolis with a Hike to Die for
8 replies