“Would you like to go and see Bernice?” I asked my mother, who lives alone in the small town of Birch Hills, Saskatchewan, about a half-hour’s drive from the hamville* of Weldon where her friend Bernice lives in a school turned into a home for seniors for those who don’t need nursing care. Like 99-year-old Bernice.

“But what will you two do in Weldon?” mom wondered.

“We’ll just drive out toward the Weldon Ferry and see if there’s anything to take pictures of,” I said.

Okay, stop yawning all of you picturing Saskatchewan’s pancake landscape. You’re in for a little treat when you drive Highway 682 from Weldon 20 km north to the ferry crossing at the South Saskatchewan River.

Loons! We saw loons for the first time in this area of the province. (Mind you, it was the first time I’d been on this road even though I grew up in the region. Our hard-working, penny-pinching Scottish-Canadian dad didn’t like to drive too far from his northern farm. Besides, it wasn’t until 1990 that the province established this as one of its many Wildlife Management Zones.) And loon chicks! Well no, we thought they were. But cousin Barry has rightly identified them as coots. It was a mother coot with chicks hitchhiking on her back as she swam away from our cameras. My sister Margie knew all about this. “Loons do go there to nest because there are so many big sloughs along that road,” she told us. For takeoff, loons need a fairly large expanse of water, about 18 metres. She also explained our lucky viewing. Loon (and coot) chicks, when they’re newly hatched, climb aboard their mothers’ backs to rest, conserve heat and escape predators. 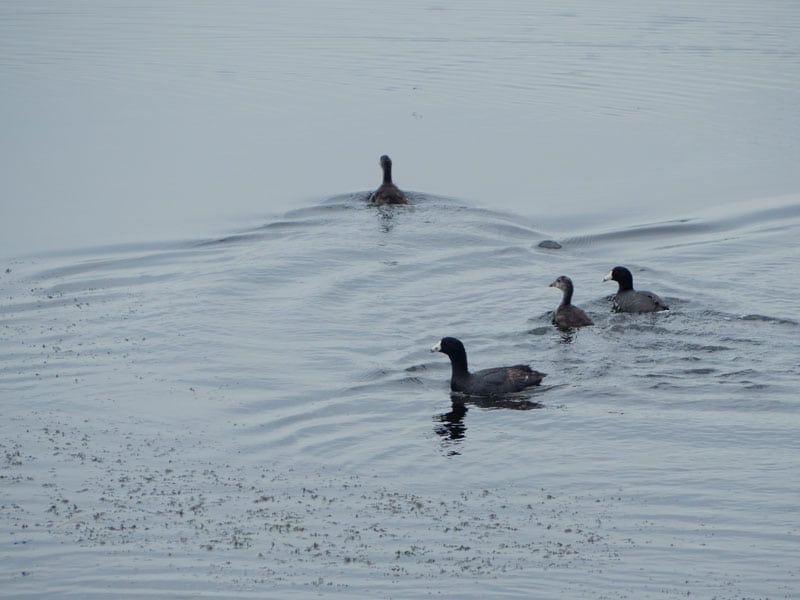 Coots, in one of the many large sloughs along Highway 682 north of Weldon, SK

Contributing to the chorus of birdsong

Who can tell us the name of this miniature beauty at the Weldon Ferry Crossing? Thank you Margie for discovering it's a Veronica Americana.

In the pink of summer

Free! The Weldon Ferry operates 7 am to midnight when the South Saskatchewan River is ice-free

Is it the little things, like seeing a new flower or an old friend, that please us most as we age?

Parking our car on the sandy road by the river, we watched the ferryman make a crossing. This is no B.C. Ferries 370-vehicle vessel. It’s small, accommodating only six cars. Your grandmother’s ferry.

A young man and his two sons scouted the small riverside trail, went back to their truck and returned with fishing poles. “Is this a good place to fish?” Magellan asked. “We’re about to find out. We live nearby but we’ve never fished here before,” said the dad.

If dragonflies are a sign of good fishing, they were filleting all night. Iridescent blue, quiet as a whisper tens of them unfolded their elongated, diaphanous wings, delicate as bible paper veined with silk thread.

Gently, they touched down on a river flower near the water’s edge that I’ve never seen before. Small as a miniature hyacinth, its clusters of baby-pink petals were nestled with dragonflies. Marsh smartweed, Margie?

We found mom and Bernice, friends for 60 years, in the coffee room, so busy catching up, reminiscing and predicting they didn’t realize we were late. Lyla, a recent friend of mom’s, was with them. “Your mother,” said Lyla in a booming voice, “your mother, when I was sick, brought me carrot ginger soup. It cured me right up, it did,” she said, leaning her tall frame down to give mom a hearty hug before wheeling her walker toward her room. Lingering outside in the warm afternoon sun, I asked Bernice about her son Russell, plans for her upcoming birthday, how she liked the homey transformation of the old school. Small talk before saying our goodbyes.

Back in Vancouver a few weeks later on a Sunday morning, I found a quote in my in-box that reminded me of that afternoon in July. It’s by Henry Beston from his book Northern Farm. “Who would live happily in the country must be wisely prepared to take great pleasure in little things.”

When Will We Stop?
12 replies