Benesse House Park, round about midnight on the way to our room, a ghostly guy in the shadows near the Hiroshi Sugimoto artwork

Benesse House Park, round about midnight on the way to our room, a ghostly guy in the shadows near the Hiroshi Sugimoto artwork

“That’s good because I didn’t want to sleep in a yurt on the beach,” Ward said when I told him we’d booked rooms for he and Lynn and Magellan and I at Benesse House in Japan.

Like Claudia and Jamie in the children’s book The Mixed-Up Files of Mrs. Basil E. Frankweiler, we were going to sleep in a museum. Not in New York’s Metropolitan Museum like them, but in Benesse House among contemporary art: the scribblings of Cy Twombly, the driftwood of Richard Long and the graffiti-style paintings of Jean Michel Basquiat. The very idea made us feel like kids on an illicit adventure. Imagine, we could sneak out in the middle of the night and have an intimate view of an Alberto Giacometti sculpture or a Hiroshi Sugimoto photograph.

First, let me tell you a bit about Benesse House.

Entrance to the Lee Ufan Museum, part of the collective of Benesse Art Site Naoshima

I'm a BIG fan of Hiroshi Sugimoto's photography so seeing this series Time Exposed , 1980-1997, was a BIG treat

It’s part of a collective of contemporary art museums and installations called Benesse Art Site Naoshima on the islands of Naoshima and Teshima in Japan’s Seto Inland Sea. In 1989, a Japanese company, Benesse Holdings (Berlitz, the language school, is one of their brands), bought a big tract of land on the sparsely populated island of Naoshima, historically known for fishing and salt production, both long in decline. Soichiro Fukutake, then head of Benesse Holdings, wanted a special place for his company’s modern art, which included works by famous Japanese artists and world-class names like Claude Monet, Walter De Maria and David Hockney. The company hired the internationally renowned Japanese architect Tadao Ando to design all of the buildings. (Soichiro Fukutake’s son recalls Naoshima when it was a campsite for children. “I was one of the first 100 children to experience this. The person leading the development and construction of the campsite was no one other than the young Tadao Ando.”) The venture, now owned by Benesse Holdings and the Fukutake Foundation, has revitalized these islands, which attract about 800,000 art lovers a year when the Setouchi Triennale is on—as it was when we visited last October, on a weekend.

"The Black Sea Bream of Uno," Yodogawa Technique, an introduction of what was to come at the ferry terminal at Uno on our way to Naoshima

Which meant the rooms, which are on the second and third floors of the Museum, were hard to reserve, even six months in advance. However, there are rooms in four buildings: the Museum, where Lynn and Ward slept on both nights; the Park (where Magellan and I spent the first night before moving to the Museum); the Beach; and the Oval (more about that later).

Sleeping in the museum, our room the second night

At Benesse Museum, where nature and art coexist within a space of concrete and glass, you live, breathe and dream the philosophy of Tadao Ando:

The structures around Naoshima are super-hi-tech, 23rd-century constructions of grey reinforced concrete, with every next-generation innovation; but they take you back to the principles of spareness, simplicity and concentration that graced the haiku, brush-and-ink paintings and Noh dramas of old.

Arriving at Benesse House, I had an exalted, high-spirited feeling, like the thrill of anticipation the night before my birthday when I was a kid. And what presents there were for us on the afternoon tour of the Museum’s art!

Like The World Flag Ant Farm by Yanagi Yukinori. You don’t have to be a kid to get excited about the fact that there are real ants in this series of world flags made out of colourful sand in plexiglass boxes connected by tubes. As the ants migrate through the sand, they mix up the patterns and colours of the flags. “What do you think it says about national identities?” our guide asked.

Another piece we liked was Jonathan Borofsky’s Three Chattering Men. The hinged jaws on life-size robotic sculptures of three men move up and down as they incessantly and discordantly repeat, “Chatter, Chatter, Chatter, Chatter…” Our guide was big on audience participation. “What do you think the artist was trying to say?” she asked. Since it’s across from a Frank Stella painting, someone suggested it was about the endless chatter in the art world about what art means, which art form is best and whose art is best.

Remember pressing your face against a windowpane when you were a kid and having that inside-outside feeling, like the rain was touching your nose? That’s how Tadao Ando’s architecture made me feel, especially in a far corner of the Museum that opens up to a smooth, flathead stone sculpture, outdoors, Kan Yasuda’s The Secret of the Sky, on which you can lounge (and take photos—Benesse House doesn’t allow photos of its interior art).

There’s a gentle quietness on Naoshima; neon it is not. “Nao” stands for honesty and “Shima” means island. And like a cresting wave, seventh in the flow, the space between each outdoor sculpture allows you to see each one rise in its full splendour. Here are the primary colours kids, your polka dots, your silly figures.

Benesse Park where Magellan and I slept the first night

After a wonderful dinner (thanks L&W) at Benesse’s Terrace restaurant (a French restaurant so there was bread—our first in days—and butter, more childlike glee), we didn’t want the day to end. “Why don’t we go to the Oval?” said Ward, “I read they have a bar that’s not just for elite guests staying there.” After confirming it was open for another half hour, we rushed outside to the monorail that leads to the top of the mountain.

There was only one other passenger on our five-minute ride so it seemed appropriate to make conversation. “Where are you from?” asked Ward. “New. York. City,” replied Mr. Upper-Crust Stiff, exaggerating the spaces between the words, correctly guessing we were on this private monorail for a nightcap, not a night in one of the six “James Bondian” rooms, not where we should be in a yurt on the beach, not that he would know that low-level accommodation existed. With the staff treating us like foreign royalty, the exterior view competing with the Oval’s art for our attention and our laughter about the day growing louder and sillier (“New Yawk C-tay—I wish I’d asked, “Where is that’?” one of us joked), Magellan said, “I think this calls for another round.”

At Benesse House Oval, Tadao Ando has redefined the concept of open-to-nature architecture in what I'll call Oval Sky and Pond

Saying good night to “the kids” at the Museum, Magellan and I wandered over to our room at the Park. It has its own fabulous art and since we were the only residents surreptitiously slithering around in the dark, we broke the rules and took photos of Hiroshi Sugimoto’s Pine Trees, Coffin of Light and the “night writing” work of Teresita Fernández. Blind Blue Landscape. 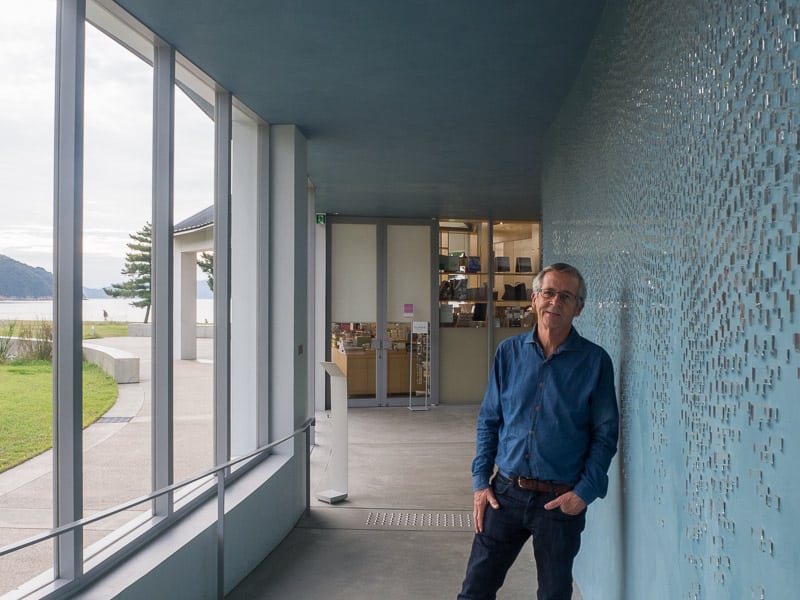 Like kids at camp, we tucked ourselves into our twin beds in our quite basic room, albeit glamped with down comforters, original art (Shinro Ohtake’s The Shipyard Works) and a sea-view balcony. (The Wee-Willie-Winkie long, brown-and-white striped cotton nightgowns they  provide are so arty I bought one for myself and as Christmas presents for Lynn and Ward.)

For a little while, we couldn’t stop giggling. But it was long past our bedtime and very soon the remains of the day dissolved into the dreams of tomorrow, the salt smell of the Seto Inland Sea faintly wafting over us like a mother’s breath from far away.

Benesse Art Site Naoshima has an excellent website. We’ll do other blogs on the incredible art at the Chichu and Teshima Art Museums and other holdings.

There are many good articles about Benesse House.This one is about the architecture. Here’s one about the art .The New York Times has covered it, so has The Guardian. Even the National Post.

There are also articles like this one and this one about how Benesse Art Site Naoshima has transformed these little islands.

You can find out more about the Setouchi Triennale as we did from an excellent source—David Billa’s blog Setouchi Explorer as well as the festival’s own website.

UPDATE: Here’s the schedule for the travelling exhibition of Yayoi Kusama’s Infinity Mirrors. Its only stop in Canada is at the AGO. Sarah Boxer penned an excellent article about it in the July/August 2017 issue of The Atlantic: “Yayoi Kusama’s Existential Circus.”

UPDATE2: David Villa has an article (and good photos) on Teresita Fernandez’s piece in the Park, where Magellan and I slept.