I knew that Sunday, as we parked the car overlooking a hay field in the lush green of the Basque countryside and walked by a garden leading to a red-tiled farmhouse restaurant, that our lunch at Mugaritz was going to be good.

“Look at these,” I said to Magellan pointing at an elongated cluster of tiny, mulberry-coloured flowers.

They appeared as our first course, from the garden to the table. Red Amaranth raceme with sesame powder. 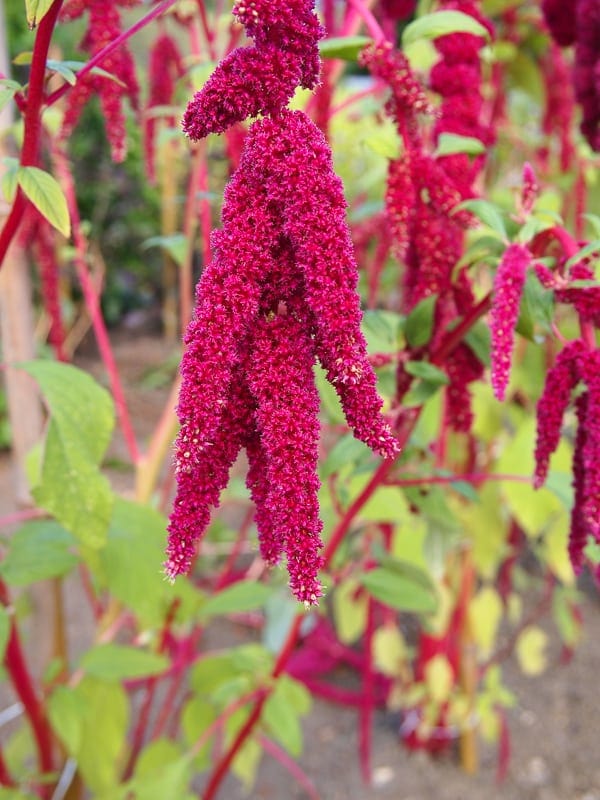 Red amaranth in the garden 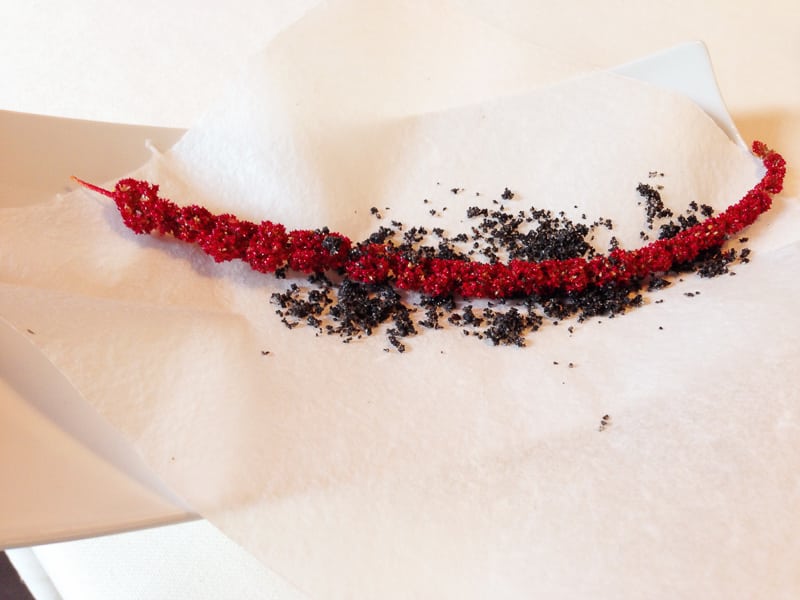 Down the hatch goes the Preboggion, the stew of weeds and crisp potatoes

I may have misled you with the word farmhouse. Once upon a time Mugaritz was a dairy farmhouse. Located about 20 minutes inland from San Sebastian in a small town called Errenteria, it was transformed into Mugaritz in 1998 and after a devastating kitchen fire in 2010, renovated again with the assistance of generous Japanese chefs.

You can see traces of Japanese design in the plain wooden walls and ceilings and washi-like light fixtures. The restaurant has a quiet warmth, enhanced when we were there by the sunglow of late September beaming in through large picture windows that open onto a patio garden.

On each table is a white dinner plate, broken in half and then pieced and glued back together—deconstructed then re-constructed art, which gives you a sense of the kind of food presented by chef Andoni Luis Aduriz and his team of Mugaritzians.

“What we’re trying to do here at Mugaritz is make this about life—and more life,” Andoni told a reviewer. “We’re trying to feed you all the food that we hope will leave you the highest impression of life itself.” 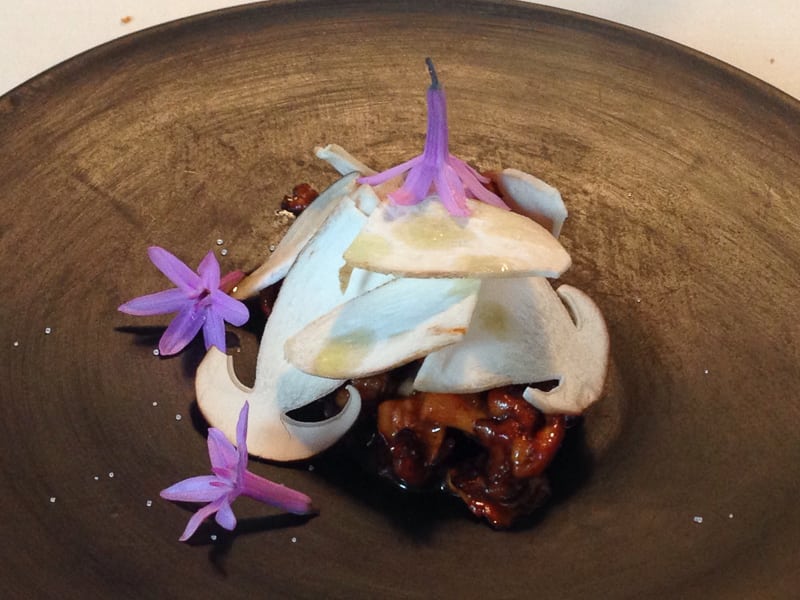 More impressive edible flowers appeared on the series of 21 (!) small courses we were served. Blanched morning glory and dark seeds powder. Weeds, too. Preboggion. Stew of weeds and crisp potatoes. Garden vegetables, like Grilled eggplant with aged cheese rind and honey dressing, one of my favourites. And local farm meats too, of which the best was Iberina pork tail with sour leaves and creme fraiche and Grilled toast of bone marrow with herbs and radish ash.

Mugaritz is only four miles from the Bay of Biscay, the source of the seafood bites we devoured. Loin of Hake, tiger nut starch and concentrated clam juice was delicious as was Coastal fish with crunchy trimmings of aged sourdough and sweet pickled onion. But my favourite—the tiniest fish we’ve ever eaten—was consumed in their small but efficient kitchen, where two dozen or so brown-aproned Mugaritzians were quietly attending to duty. “Every guest gets a kitchen tour,” our waiter told us, “not just the food writers or visiting chefs.” While he was telling us more about the restaurant’s philosophy, we were offered a whole little fish about the size of a butterfly, flat like sole and deep-fried for seconds. It was such a crunchy, tasty mouthful of sea and salt and fat that it was hard to keep my hands off the row of them waiting for the next tour of diners.

As we walked back to our table, I realized how much our lunch resembled kaiseki, the Japanese multi-course meal of small dishes of food, each involving different cooking techniques and reflecting a particular season. Both Mugaritz and kaiseki restaurants combine the traditional and the contemporary, like Andoni’s Threads of crab with vegetables, a traditional Basque seafood soup jazzed up with macadamias and pink peppercorns. Ingredients are seasonal and regional, like the Frozen almond turron. Both strive for harmony and balance, savoury and sweet. Everything about experiencing a Mugaritz or a kaiseki meal is designed to appeal to all of your senses—not just the colour, texture and taste of each artfully presented dish, but everything—your arrival experience, the décor, the dinnerware, the service…

Andoni gets that it’s not just about the food. (And not all of his dishes will please everyone. Sweetbread of suckling lamb? Algae jellyfish?) He knows that as much as (or more than) the food in a restaurant, we diners remember the emotional experience. He calls it the “sensory logic of the gastronomic brain.” In fact, in studying comments from their diners, the Mugaritzians found that taste ranked thirteenth! (The arrival experience came first, then memory, then emotion.)

Would you even guess there's a restaurant inside?

Such a romantic place (look at the couple in the background)

You can't take the farm out of the girl

After desserts, our waiter asked us if we wanted to have the final “surprise” outside on the patio. They call it Seven deadly sins, seven stacked wooden boxes, each hiding a mignardise that alludes to a deadly sin. We could hardly wait to see what was inside each box as we worked our way down and had fun guessing what it might be. For us (what does this say?), this was the best part of the meal.

Pride: Two golden balls of chocolate that were empty inside.

Envy: Two very different balls of chocolate, one plain, the other fancy.

Greed: Your turn. Guess what opening this box revealed?

I’m guessing that Andoni and the Mugaritzians realize that consciously or subconsciously, many people experiencing their restaurant feel guilty after consuming such a long and luxurious meal. It’s expensive, precious; some might say pretentious, in a country with high unemployment and a world where one in eight people is starving. The iniquity weighs less on your soul when you end the afternoon playing Seven Deadly Sins and drinking tea on a patio garden in the countryside.

(BTW, in the box marked Greed? It was empty.)

You can get a good feel for Mugaritz by taking a trip to its website.

Parker Bowles, Tom. Appetite for perfection: I flew to Spain for lunch at Mugaritz—and ended up eating the menu (quite literally). The Daily Mail. May 19, 2012.

Pateniti, Michael. Mugaritz Is the Most Adventurous Restaurant in the World. GQ Magazine, April 1, 2014.

Bum Police in the Kingdom of the Thunder Dragon

Ghosts of Sex and Religion
Scroll to top