The Sealy Tarns Steps hike is on the left

When we read about the Sealy Tarns Trek in Scott Cook’s NZ Frenzy hiking guide, I thought, “No way. This seems too much like the Grouse Grind in North Vancouver.”

I’ve done the Grouse Grind. Once. I hated it. Not because it was a leg-and-lung stretcher. For the entire time it takes to climb up that steep staircase to the top of Grouse Mountain (45 minutes for the young and restless, two hours for me when I did it with a group of Alberta girlfriends years ago) you’re lodged in a dense rainforest. Enforested, you get one peek-a-boo view before you reach the top. Okay, maybe two .

A “kiwi” we met on a day hike on the Rob Roy Track in NZ changed our minds about Sealy Tarns. On hiking trails around the world we’ve found that jubilados like us often stop to talk; this time it was a woman, a little younger than us and on her own. “What are your favourite hikes on the on the South Island?” we asked her.

The first one she mentioned was Hooker Valley, which we planned to do. Then she said, “Don’t miss Sealy Tarns.” “Really?” we questioned. “You have the most amazing views of Mt. Cook all the way up those steps,” she said. “It‘s one of my absolute favourites. And it starts from the same campground as Hooker Valley.” Okay!

Therein lies the difference between Sealy Tarns and the Grouse Grind. Perhaps because we’re jubilados of the Saskatchewan diaspora, we’re genetically predisposed to wide-horizon hiking where the open collaboration of light and landscape creates beauty and nuance in every direction.

Sealy Tarns Track starts at the White Horse Hill DoC campsite where we camped the night before and left our rented RV, Kohanga, to bask in the sunlight.

Peregrination to the top

The energy of light-filled open vistas

It’s a zigzag of well-crafted staircases switch-backing up the open mountainside through sub-alpine grasses. The DoC contractors, who in 2012 laid down the “Stairway to Heaven” as they called it, counted more than 2,200 steps. That’s about 600 fewer than the stairy Grouse Grind—and both trails cover the same distance: 2.9 kilometres.

Who can resist humming Led Zeppelin? 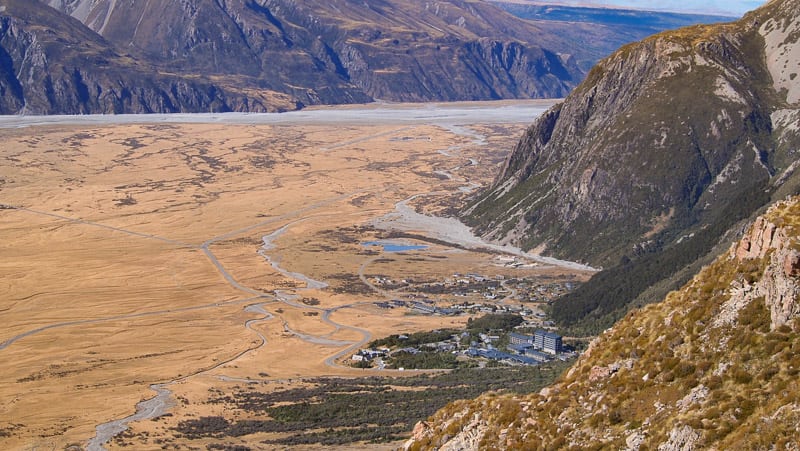 Heightened awareness of the necessary steps

Followed by a noon shadow

Taking pictures to catch our breath

A tarn is the name given to a wee pond or lake in the mountains. But small can be beautiful as we saw when we reached the Sealy Tarns. We lingered in the sun with our fellow Saturday-morning hikers, buoyed by this resplendent day in April, its estival feel making it seem so much like summer. No one was grousing.

A kaleidoscope of Mount Sefton reflected in Sealy Tarn

On the edge of beauty

Don’t take my word for it. Check out the Grouse Grind for yourself.

Wild Camping on the Beach at Ras Madrakah and Ras Shuwaymiyah