Sinking my teeth into a cob of plump, sweet corn the day it’s picked is what makes this time of the year a treat.

You might remember me saying something like this last year in our blog Yellow, which featured a recipe for Taos Corn Chowder.

For this year’s recipe, we’re going south of Taos, New Mexico, to the town of Marfa in West Texas, where Magellan and I spent four wonderful days this spring.

Marfa? Weird name isn’t it? Yes indeed. The town was named after a character in a Dostoyevsky novel. Population: 2,000. Nearest airport: El Paso, on the Mexican border, three hours away.

Cattle ranchers have always been the mainstay in this area of bare grassland, where the railroad tracks disappear into an endless horizon. Perfect for a military base during the Mexican Revolution, then an Army Air Field in 1942. When the Army left, tumbleweed was almost the only thing turning over in Marfa for three decades until the artist Donald Judd started buying up old military buildings and filling them with art. But after Judd’s death, the train’s whistle blew past empty storefronts again.

I got interested in Marfa in the late 90s after Judd’s family reactivated his legacy, arty non-profits and other non-conformists rolled in, resulting in profiles of Marfa’s unique vibe in travel articles. When our friends Teresa and Paul decided to celebrate their anniversary in Marfa, Magellan and I arranged our itinerary to meet them there. It’s an amazing town—the subject of at least two future blogs—but for now, let’s find Rocky and his corn. 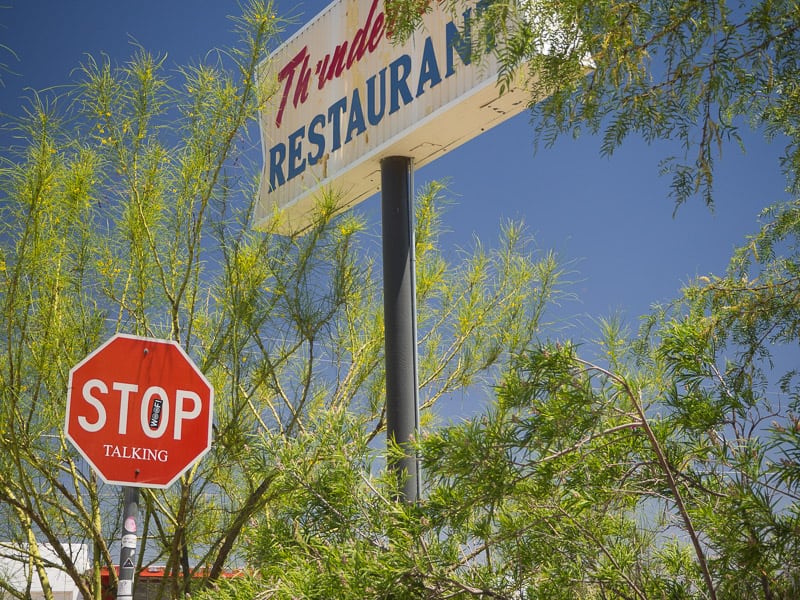 The centre of Capri's logo likely references Marfa Lights, a phenomenon in the dark nights out here in the West Texas badlands

Capri's commanding entrance to 4,000 square feet of restaurant and events space plus the garden

More than 170 species of flowers, cacti and botanicals of the Chihuahuan Desert brighten the outdoor eating area 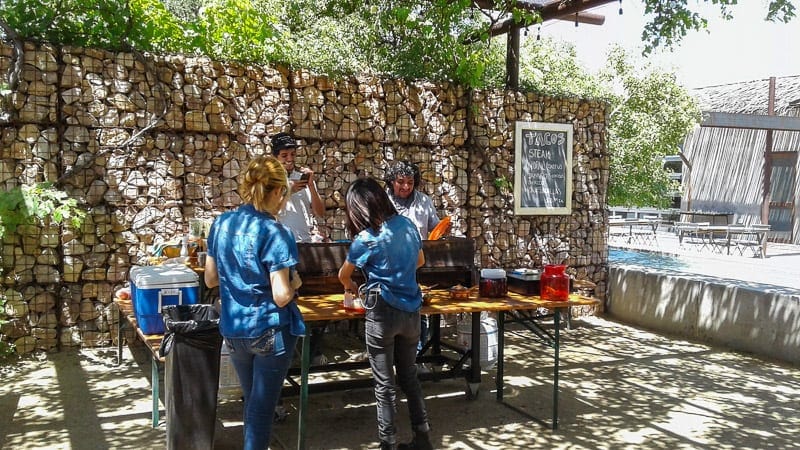 The light, the light that draws artists to this town brings out the best Saturday tacos lunch from this pair of local guest chefs at the Capri

Señoritas waiting for tacos were photobombed by Magellan (Photo: Paul)

Cross the tracks, look for the baby-blue Thunderbird Hotel (owned by Rocky’s wife) and across the street you’ll see the sign for the Capri Restaurant, a former ballroom with two of its original adobe walls. Push open the Texas-tall entrance door and you’re into a room of floating concrete walls accented with a huge native blanket wall-hanging, soaring ceilings that expose steel trusses and tall windows overlooking a big outdoor space with five fire-pits, hammocks and a large botanical garden with private nooks.

Don't you love the colour punch of those bar stools?

Mezcal prickly pear margarita or one made with gin infused with the Mexican herb epazote and French Chartreuse?

In the kitchen, you’ll find Rocky, an incredible chef. So good he was profiled in Food & Wine magazine this summer.

Rocky’s eclectic background makes him an ideal Marfa resident. He’s cooked in a trailer park, off-grid in Mexico and at a Michelin-starred restaurant—a trio of places that blended together could be Marfa.

Rocky’s Slow Food menu goes back, way back, long before the beef-and-beans dinners of cattle ranchers to the region’s ancient cuisines—pre-conquest. Think cactuses, chiles, rabbit, grasshoppers—and of course, corn. I’ve read that he makes his tortillas from corn varieties dating back 6,000 years.

The four of us shared plates of goodness. Grilled Avocado. Queso Fundido (a hot cheesy dish with bits of chorizo into which you dip corn chips), Chapulines (grasshoppers) Tostadas with Anasazi Beans, Chamoomile and Epazote. Charred-Skin Chicken and Smoky Pineapple Sorbet and Mesquite Bean Ice Cream… and the best thing on the menu: Elotes.

Elotes are Mexican corn-on-the-cob. Rocky’s are a total sensual experience.

Your eyes feast on an earthenware Mexican dish cradling your elote, light green husks pulled back from the sunshine yellow kernels—some blackened by the grill—flaked with red (chiles?), a puff of smoke from an incense burner in the bottom of the dish enveloping your senses.

You lean in to try and guess the fragrance. Mesquite? “No,” says the waiter later on, ‘It’s copal, an aromatic tree resin used by the cultures of pre-Columbian Mesoamerica.“

Roll up your sleeves and get your napkin ready. Squeeze a little fresh lime on your elote.

“Ummm, GOOD.” That’s the only thing you’ll hear besides the crunching of your own teeth as you eat around (or across) your elote.

Usually I eat corn on the cob with only a few grinds of pepper; Magellan likes his with butter and salt. Now Rocky’s Corn is all we want.

The food at Capri was so good we went back the next day for a lunch of cactus, steak and hibiscus tacos served out back behind the grape pergola by friends of Rocky’s. That’s when we had a chance to talk to Rocky, who was in the kitchen preparing the menu, which changes nightly.

Of course we asked him for his elote recipe. He explained that after grilling the corn, he smooths on a mixture of finely grated Parmesan cheese and mayonnaise. “What’s the red spice?” we wondered. “It’s a crushed Korean red pepper,” Rocky told us. “It’s actually quite a sweet chile, not very spicy, wouldn’t you say?” We agreed. “And that pineapple ice cream. How did you get such an intense flavour?” we asked. Rocky laughed. ”It’s the chickens,” “I grill pineapples when I’m cooking chickens so there’s more smoke, which adds more depth to the taste of the pineapple.” We wondered why his restaurant was a little low on the radar and not packed with people—he’s only been serving dinner since February! He also told us about his interest in foraging for foods the ancient peoples ate to serve at the restaurant and in cultivating old varieties of vegetables. “You’re like Victor at Extebarri in Spain,” I said. “That’s my goal: To eat at Extebarri,” said Rocky, “Have you been there?” (Remember Primal Flavours?)

After lunch, I think it was Teresa who said, “I’m up for coming back for dinner. What do you think?”

“I rarely cook rabbit but I love it when someone else does. Do you think he’ll have it on the menu tonight?”

Hello Children. This is Rocky. We unfortunately do not have Rabbit tonight because the mommas are busy raising their babies. We are trying to cook up something interesting though and even if you don’t return for dinner come back for a cocktail, Thank you for all your sweet compliments.

We did something Magellan and I rarely ever do. The four of us went back for dinner. More mezcal margaritas. Chilled fava Bean and Corn Soup. Boquerones (anchovies) with Huitlacoche (a sort of mushroom that grows on corn, sometimes called a Mexican truffle) and Popped Amaranth. Rose Petal Pickly Pear Sorbet. And more elotes. And you know what else? After deciding to spend an extra night in Marfa, Magellan and I drove out to the Capri on Sunday night, just in case it was open.

Here's what Harris Seeds says about Vision corn: "Unmatched tenderness and flavor and exceptional eating quality are the trademarks of this yellow sweet corn, Xtra-Tender super-sweet. The 8" ears are well filled with 16-18 straight rows of glossy yellow kernels and have strong tip fill. This mid-season yellow super-sweet is delightful to customers."

Save Print
Prep time
10 mins
Cook time
9 mins
Total time
19 mins
From Mexico, Elotes. Tasted in the US as cooked by Rocky Barnette at Capri Restaurant in Marfa, Texas. And branded in Canada by Magellan under the name "Pro-NAFTA Corn." This corn on the cob is so simple it barely needs a recipe. I found Korean Red Pepper Flakes at South China Seas on Granville Island. Don't forget the limes, which we often do—their juice really kicks up the flavour.
Author: Spice
Serves: 2
Ingredients
Instructions
3.5.3226

Here’s the story about Rocky from July’s Food & Wine magazine. (He’s much better looking than in this photo.)

Still our favourite corn by a country kilometre is from Rondriso Farms. Pam and Ron Tamis (and their hard-working sons) picked the Vision corn shown in our recipe just hours before we cooked it. If you’re in Vancouver, you can this sweet, plump corn at the Saturday Farmers’ Market at Trout Lake. Rondriso Farms is in Surrey, where the Tamis family has been farming since 1958.

Marfa locals, like Buck Johnston and Camp Bosworth from Wrong Store, like Rocky’s food, too. “We LOVE what Rocky is doing at the Capri. It’s original. It’s ambitious. It’s wonderful. And that room and garden are gorgeous.” (Yes, there is a shop in Marfa called Wrong Store.)

Do You See What I See?

Chaco: Lining Up for the Solstice

The Colours of Bill Frisell: Xanthous to Topaz

Campsite Cooking in the Wild
6 replies

Compartir: a Restaurant Worth Sharing
Scroll to top