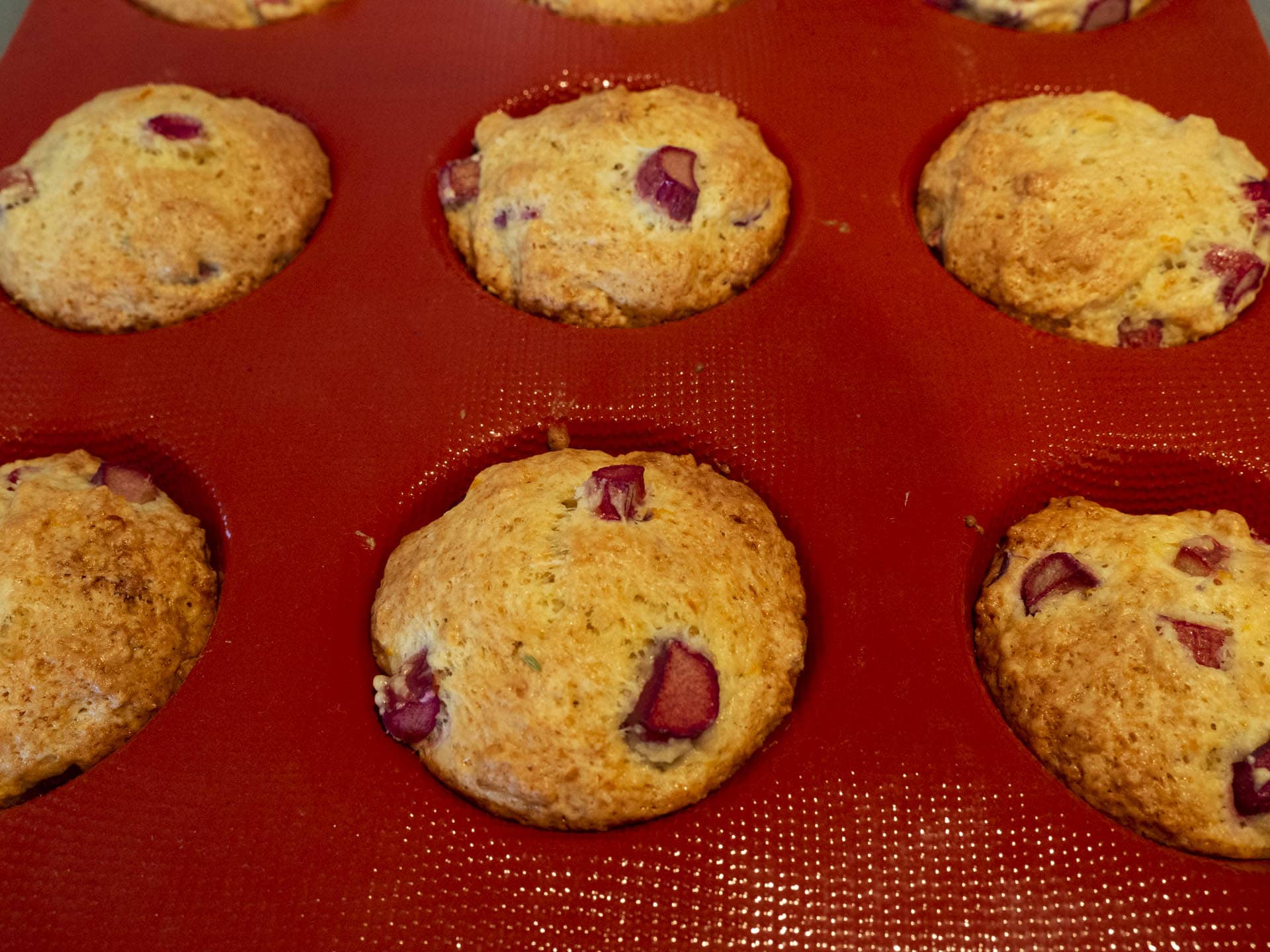 Growing up on the prairies, rhubarb signaled that winter was over: dessert bowls of mom’s dull-coloured canned rhubarb with its bracing, teeth-cleaning acidity came to an end, replaced by her fresh rhubarb pies and mini cakes: sugared rhubarb and walnuts topped with a sweet-cream biscuit dough and baked in muffin tins. Yum! It doesn’t surprise me that rhubarb first came to Europe, it was considered a spring tonic.

Rheum rhaponticum  originated in China, where its roots were ground up and used as an all-purpose digestive medicine. In the company of pearls and silk, rhubarb travelled the Silk Road to Russia, where the czars controlled it—you had to have a special permit to get some. It wasn’t eaten until the eighteenth century with the advent of sugar plantations. Why didn’t anyone think to add honey to it before that?

I keep a file folder on my computer called “Monthly Food” so I don’t forget to make my favourite recipes. Under “May,” you’ll find a lot of recipes beneath the heading Rhubarb, as you can see:

While I prefer crimson stalks of rhubarb, intense colour isn't an indicator of sweetness like it is with other fruits

For her rhubarb galette recipe, Alice Waters has you cook the elongated ends with sugar and a splash of water, then strain it through a sieve to create a ruby glaze for the galette

Silicon muffin tins: no more greasing muffin tins and a much easier cleanup

So far this month, I’ve made Rhubarb Galette (from Alice Waters’ cookbook Chez Panisse Fruit), which Marsha and George and Magellan and I ate in its entirety one night, and Rhubarb/Almond Squares from Chow. I didn’t take photos of either dessert. Which is too bad, because both showcase small, candy-red pieces of rhubarb, whereas their crimson colour is hidden away inside today’s recipe, Rhubarb Pecan Muffins.

The recipe, torn from the Vancouver Sun sometime during the last 20 years, won Vicki Gabereau’s best-muffin contest on CBC. Because of the way I cut out the recipe from the newspaper, there’s little I can tell you about the winning author except that her last name is Doucet.

I’ve made only two small changes to Ms Doucet’s recipe. The addition of ground fennel seeds, a flavour enhancement I picked up from both Gourmet magazine and The Flavor Thesaurus by Niki Segnit. And a dash of vanilla.

Studded with ruby bits of rhubarb

I know I should make my own jam, but who can resist this packaging?

Up the rhubarb flavour by spreading these muffins with  rhubarb jam. And if you want the taste of spring early next year, freeze some rhubarb and make these muffins before the snow thaws and the lilacs bloom.

Save Print
Prep time
10 mins
Cook time
30 mins
Total time
40 mins
Adapted lightly from an award-winning CBC recipe, these muffins pop with the tang of rhubarb, are not cake-sweet, contain little oil and have crunch and protein thanks to the pecans. We like to serve them laced with rhubarb-vanilla jam, along with slices of orange and, if I'm feeling ambitious and have made rhubarb compote, I add some of it to a small bowl of vanilla yogurt to round out our breakfast. If not, just stir some rhubarb jam into the yogurt.The muffins freeze well.
Author: Spice
Serves: 12
Ingredients
Instructions
3.5.3251

The quintessential rhubarb in the backyards of our prairie youth was thicker and more green than the snappy little red stalks I prefer for baking. In Vancouver, the best rhubarb I’ve found is available at farmers’ markets from Brian Patterson and Yolanda Versterre of Shalefield Organic Gardens. A short travel excursion.

Here is the recipe for the Rhubarb Almond Bars.

Waters, Alice. Chez Panisse Fruit. New York: HarperCollins, 2002. The bible of fruit desserts. Her recipe for Rhubarb Galette, with its glistening ruby glaze (made from rhubarb stems: waste not!) and amaretti cookie crumbles on the base of the dough, is worth the price of the book.