Ruby-flushed petioles crowned by lily-pad leaves, rhubarb announces the arrival of spring. The first fruit vegetable of the season, rushing to be ahead of asparagus, rhubarb demands to be sugared and treated as a fruit in desserts. It’s been triumphant. For a time in North America, rhubarb was called “pieplant.” I like the puckery tartness of rhubarb, the way it stays fresh tasting after cooking. So, from my favourite seventeen recipes for rhubarb, I’m sharing Rhubarb Galette, a French free-form pie, a taste sensation from the acclaimed Alice Waters of Chez Panisse restaurant in California, who has been, for fifty years, the leader of the Slow-Food farm-to-table movement.

Is it because rhubarb originated in Siberia that prairie people in a similar climate seem to love it most? Or that it grows so easily and abundantly, each plant producing dozens of stalks? That rhubarb is common, not fancy schmancy, unlike pears let’s say?

As a kid in Saskatchewan where rhubarb was ubiquitous, I can’t say it was a treat. Mostly I disliked the shuddering sensation that came from rhubarb’s sour astringency attacking the enamel on my teeth. Spinach causes the same reaction because it too, contains oxalic acid. The fatal thing about rhubarb also concerned my young self. What if mom, ever frugal, cut the stalk too close and a bit of rhubarb leaf, which we were warned was poisonously toxic, accidently went into a pie? 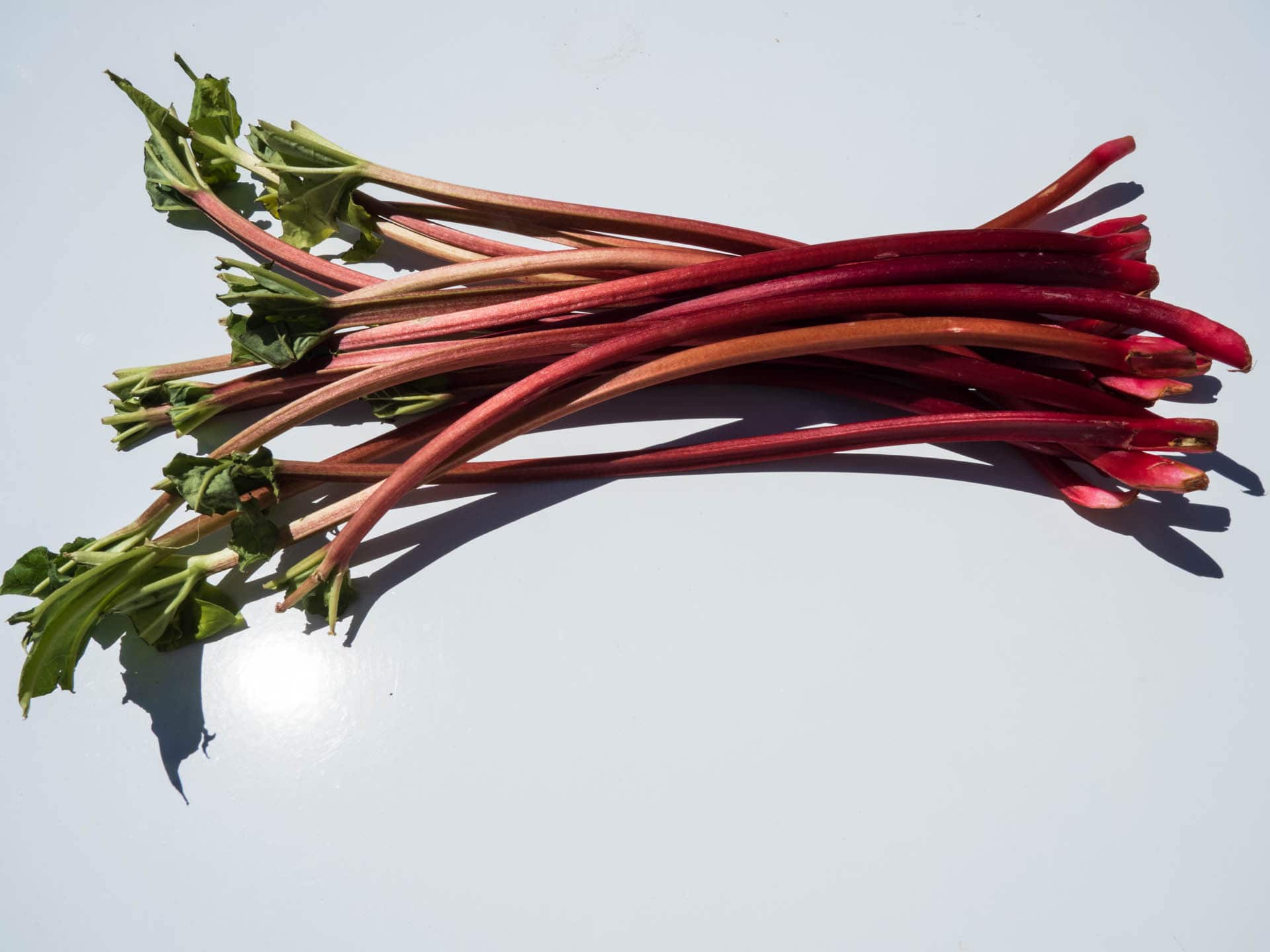 Nowadays, long before the first rosy, celerylike stalks of local rhubarb appear in our farmers’ markets, I will have decided on the recipes to be made this year. Since 2002 when I purchased her cookbook Chez Panisse Fruit, I’ve made Alice’s Rhubarb Galette every year.

I’ve found that if you use young, slender stalks of red rhubarb, less woody and fibrous than older, thicker and greener stalks, your galette will look and taste better and you will have more glaze. The place to buy it if you don’t grow your own is at a farmers’ market. As Alice writes in her newest book, We are what we Eat, a Slow-Food Manifesto,  “The whole farmers’ market movement that’s now alive and well all across America is one of the fastest and most effective city‑revitalizing interventions I know.” 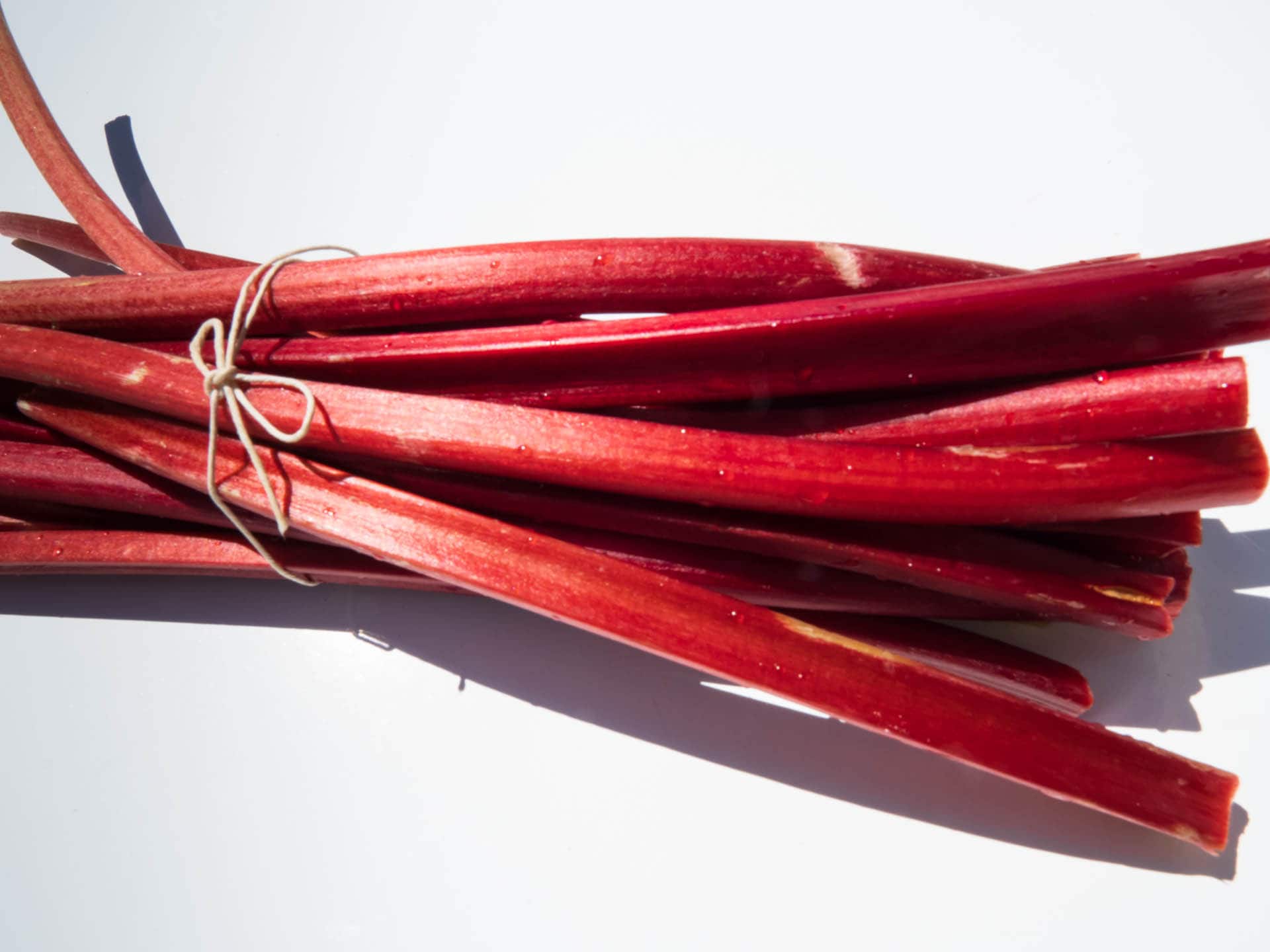 Slender and red is best

Deliciously flavourful, redolent with rhubarb, a pleasure to look at with the crust folded only partway over young red stalks trimmed into thin batons—plus a few culinary enhancements from the renowned Alice—good reasons to make a Rhubarb Galette. 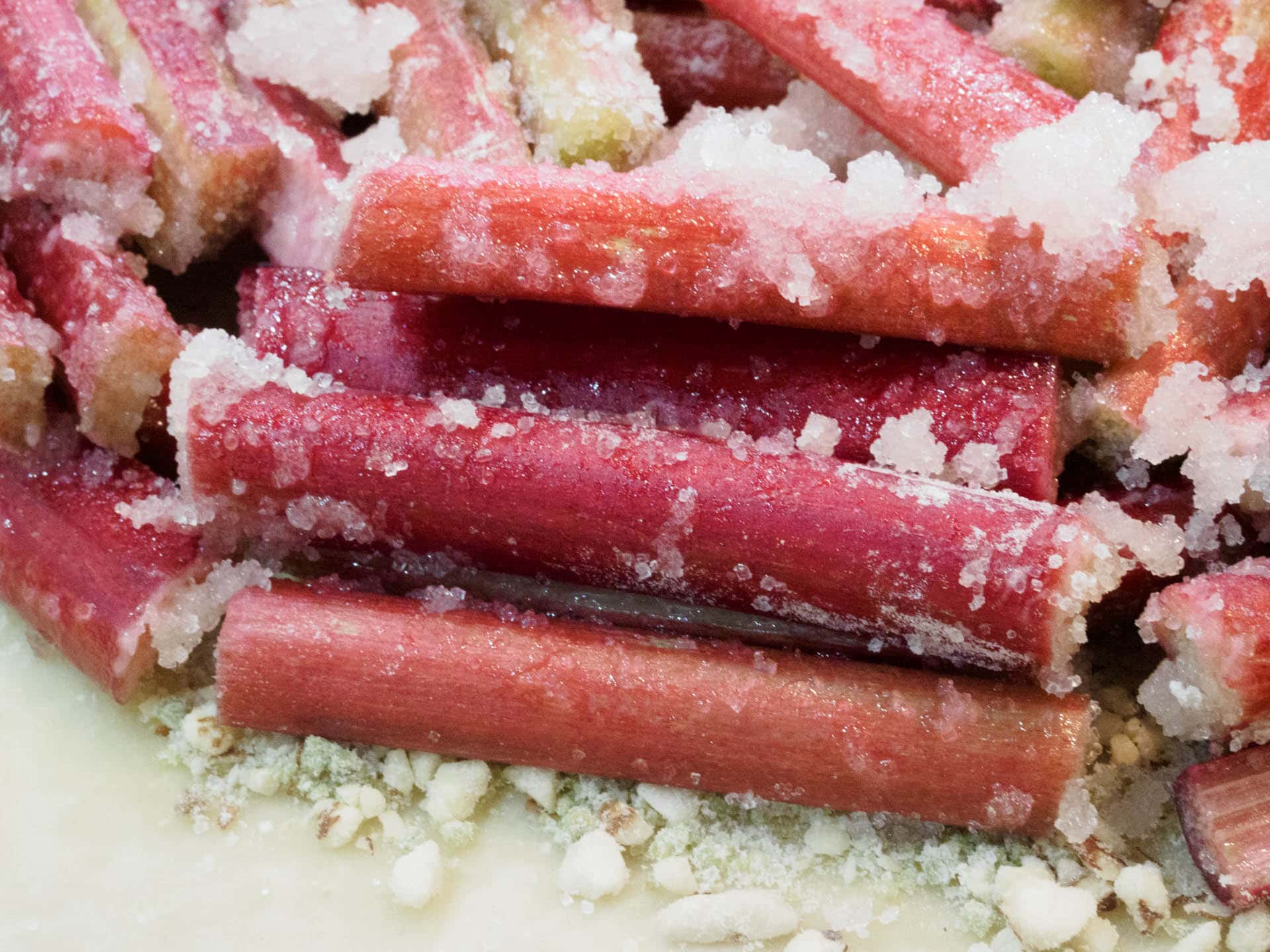 Almond partners naturally with rhubarb. In her recipe, Alice calls for ¼ cup of Amaretti Powder to be spread on the dough before you layer on the rhubarb. This is smart. Not only enhancing the flavour, the powder helps prevent rhubarb juices from breaking through and forming a sticky black toffee on the bottom of your piecrust. To make Amaretti Powder, you need about three Amaretti cookies and a tablespoon each of almonds, sugar and flour. Not everyone’s pantry has Amaretti, an Italian cookie made of almond flour, almond extract, egg whites and sugar best dipped in hot espresso. So, I’ve simplified the recipe by doubling up on the almonds for those of you who may not have Amaretti cookies on hand nor wish to make them yourself. 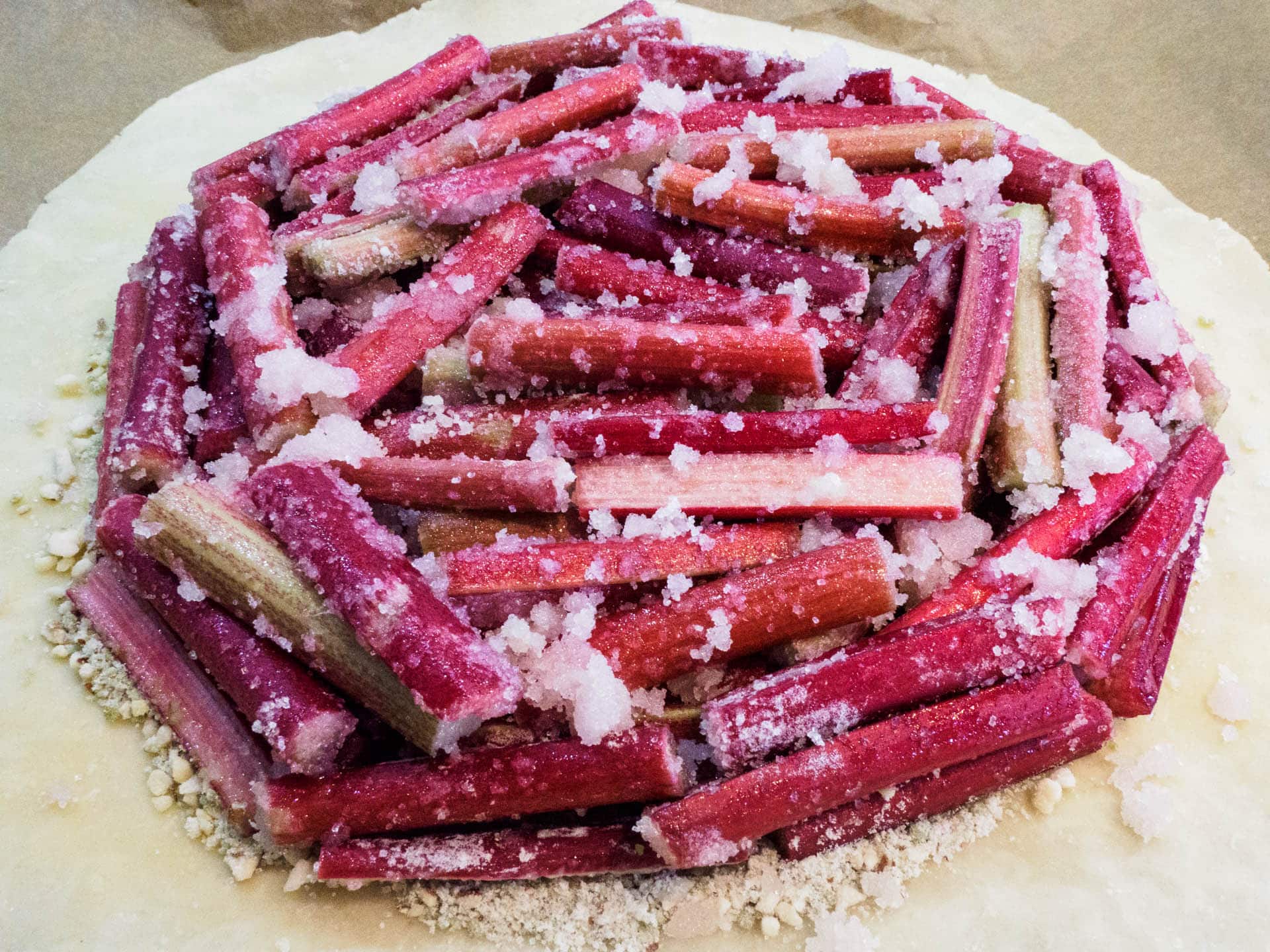 Play around with how you stack the rhubarb

Another touch of brilliance in this recipe is the rhubarb glaze. It’s made from what you’d normally discard—the bright-ruby end pieces of rhubarb petioles. (Apologies, I am recently infatuated with the word petioles.) Don’t be alarmed by the amount of sugar in the glaze; it is necessary. If you have leftover glaze, stir a little into a martini, drizzle it over ice cream or spread a thin layer on chicken, duck or pork chops in the final minutes of roasting or barbecuing. 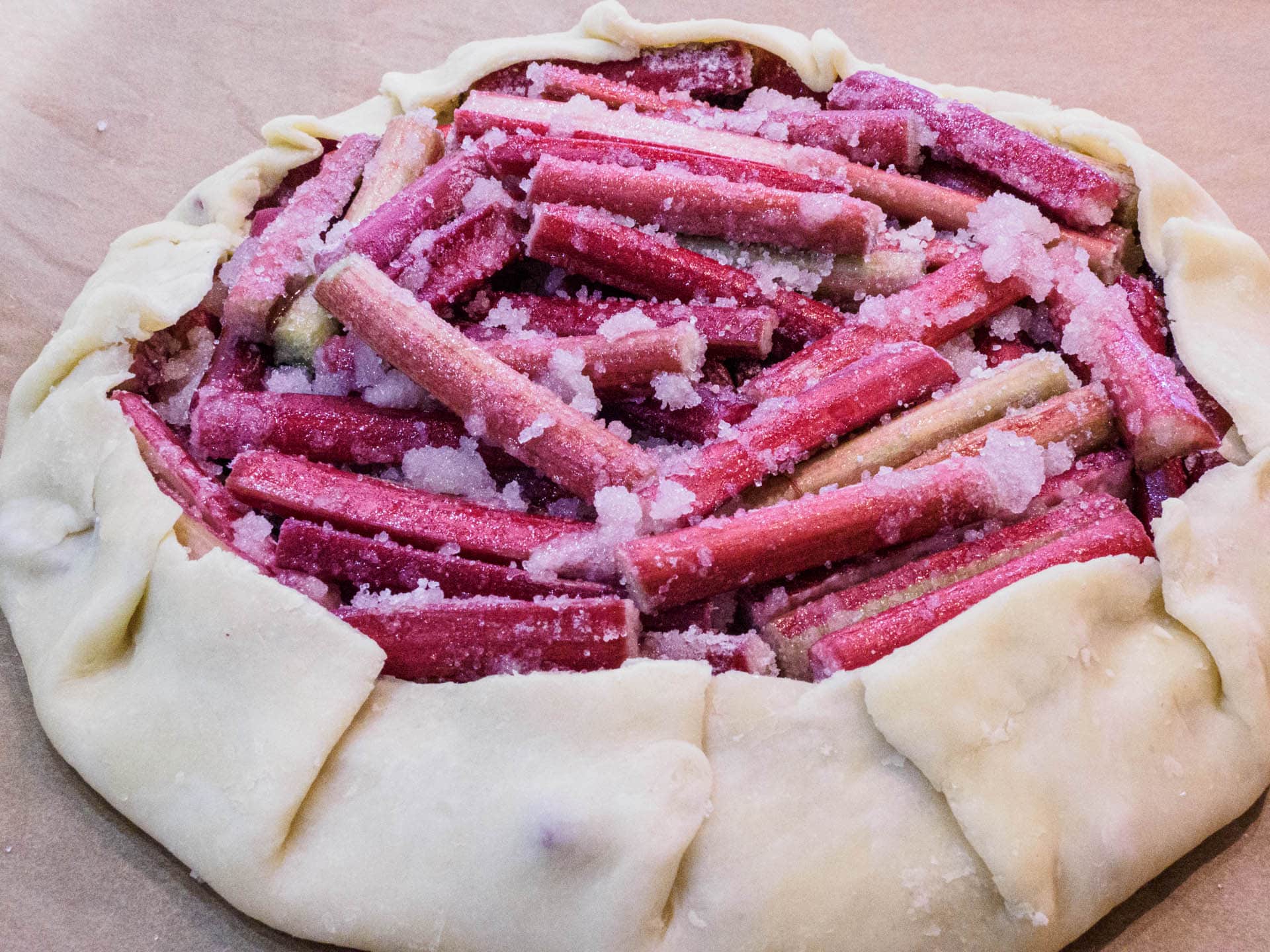 Eating rhubarb during COVID could be an especially good idea. If, like us, you’ve been overindulging in ice cream, buttered bread and galettes, you’ll be pleased to know that studies show rhubarb may lower cholesterol. And if you’re concerned about blood clots from vaccines or old age, rhubarb provides 26% of the daily value of Vitamin K1, also called phylloquinone, and well-known for its role in blood clotting.

Making a Rhubarb Galette is also humbling. It is meant to look rustic. Some of the sugary rhubarb batons will blacken during baking. The rim of crust will be imperfect, no matter how skilled you are at folding the dough over itself. And isn’t it good to be reminded that little in this world is perfect? Except for the taste you’ll be rewarded with…

Save Print
Prep time
1 hour 30 mins
Cook time
45 mins
Total time
2 hours 15 mins
Lightly adapted from Chez Panisse Fruit by Alice Waters, this galette is one of my favourite ways to use rhubarb. Skinny stalks of young red rhubarb work best, but you can cut larger stalks to size. Although the prep time appears lengthy, the dough cooling for an hour is a good part of it. I guarantee that after the first bite you'll be craving a second piece and soon after you'll be planning to make your next galette.
Author: Spice
Recipe type: Dessert
Serves: 6
Ingredients
For the Galette Dough
For the Almond Powder
For the Filling
For the Topping
For the Glaze
Instructions
Making the Galette
Making the Almond Powder
Assembling the Galette
3.5.3251

Marchese, David. “Alice Waters.” The New York Times Magazine. May 23, 2021. It was in this article that I discovered Chez Panisse, the restaurant founded by Alice is celebrating tis 50th anniversary.  “I cannot compromise when it comes to wholesomeness,” she tells David. On eating organic food, she says, “If you know how to cook and you dot eat huge amounts of meat and cheese, it is not more expensive.” As dogmatic as someone else I (you) know.

Waters, Alice. Chez Panisse Fruit. New York: HarperCollins Publishers Inc., 2002.  One of the many cookbooks by Alice Waters that I own, often refer to and cherish dearly. This book contains the best recipes I’ve ever found for: sponge cake, strawberry shortcake, raspberry soufflé, fresh fig cookies and poached pears (with warm chocolate fondant.) And as I leaf through the pages, I see so many untried recipes…

Waters, Alice. We are what we Eat, a Slow-Food Manifesto. New York: Penguin Press, 2021. On order from the VPL so I can’t say much about it, but here is an article from Lit Hub about Alice’s latest book.

Brought to you by the Letter L
Scroll to top