That’s how Sevilla is described in every guidebook. And it’s true. For a week, this fascinating city kept Magellan and I and our friends Pat and Dallas under her charismatic spell.

The Alcázar. The Cathedral. A flamenco concert. Triana’s market, ceramics and nightlife. The Antiqvarivm de Sevilla. We expected to love all that. And we did. But when I asked Pat and Dallas, “What’s the best story from Sevilla?” their response was instantaneous and unanimous: “Your anniversary night.”

Love is in the air in Sevilla.

It’s the birthplace of the legendary lover Don Juan. Sevilla is famous for another Don. Remember Carmen in Bizet’s fiery love story seducing Don José by tossing a flower at his feet? (We walked the street where the movie version was filmed: so narrow).

Completed in the 16th century after more than 100 years of construction, the Sevilla Cathedral is the third-largest church in Europe and the biggest by volume

The icon of Sevilla, La Giraldillo, the bronze weathervane atop the Sevilla Cathedral depicts faith 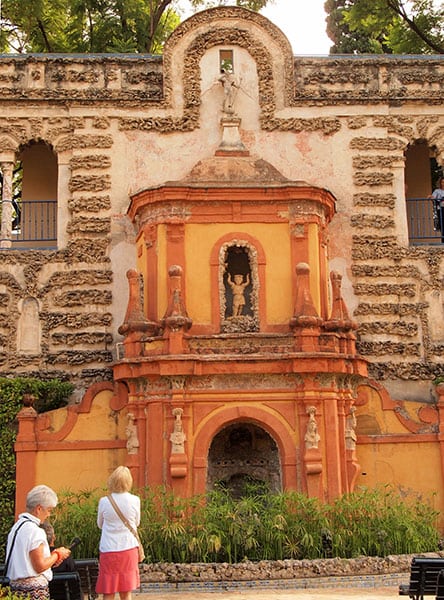 So much to look at, you need a day at the Alcázar

The ceramic museum in Triana

Towering above Sevilla's Plaza de la Encarnacion, the Metropol Parasol is the largest wooden structure in the world. Completed in 2011, its waffle-grid lattice construction is locally known as Las Setas (mushrooms)

Thinking: 'When can I return to Sevilla?"

In September, everywhere we walked in this pedestrian-friendly city was scented by late-blooming flowers cascading from balconies and streets are lined with orange trees. Guidebooks say the city is most seductive in March when the orange trees’ delicate, white blossoms—azahars is their romantic name in Spanish— perfume the air with their exotic fragrance.

“Look at that!” we’d call out to each other as we wandered the labyrinth of streets and alleyways. “There’s something beautiful around every corner,” Dallas kept saying.

Overhead canopies billow from one beautiful building to another

Flâneuring the labyrinth of streets in Barrio Santa Cruz

Not only did Pat lug this bag of oranges 1.5 km from the Mercadao de Triana, he juiced them for breakfast

Sevilla was the gateway to the New World from which Columbus, Vespucci and Magellan set sail, ventures that led to Sevilla’s wealth from gold, silver, cocoa and tobacco. These commodities financed its graceful architecture during the Spanish Golden Age. The city’s Moorish past is most prevalent at the Alcazar but also in the patterns of brightly coloured ceramic tiles decorating many buildings. Lively plazas entice exploration. And there are lots of parks for lounging among the greenery and statues.

Pat and Dallas at twilight hour

Dancing in the street

Saturday night wedding photos at the cathedral, steps from our apartment

On narrow shopping streets, creamy-white canopies billow from one side of the street to the other, elegantly shading pedestrians from the hot sun. Here you’ll find many little boutiques. Like the one displaying a single wedding dress on a mannequin on a pedestal in its window, the most exquisite gown Dallas and I had ever seen (hand-sown beads, intricate lacework, sophisticated and sexy: €13k). And Crustum, where we bought a hearty loaf large as a cake with the baker’s signature bread knot on top. Dipped in olive oil and sprinkled with salt, it was delicious at breakfast, lunch and dinner.

Naturally, I had a long list of potential restaurants. Having grown so fond of tapas, we strolled over to Robles Placentines, a Sevilla family restaurant for six decades. It was around 8:30, early for a Spanish dinner so we weren’t concerned about not having a reservation. “Inside is fully reserved. Do you mind to be outside?” the waiter asked. On such a pleasant night, we were happy to squeeze up against the building on this passageway.

“Superb Cava and wine,” my notes read, “and excellent kebabs, eggplant with gazpacho and cod with tomato concassé.” There was much laughter, talk of previous anniversaries and the beauty of Sevilla….

Orange is to Sevilla what red is to Valentine's Day

A bouquet of white gladiolas in the Mercedes' window, on their way to another party

Pat was facing the street so he was the first to notice the long, low-slung, high-priced, black Mercedes (“An S550,” he says) inching slowly down the narrow passage toward us—soon just inches away. And I mean inches. We got a good look at the two couples inside. Spanish. Dressed for an occasion. In the front, the men, their black hair curling around the collars of pin-striped suits over impeccable shirts, white as their teeth. The women, seated in the back, coiffed, bejeweled, gowned. Part of a wedding party? They were so close we could smell their perfume.

Magellan rose to the occasion and moved his chair aside to let the Mercedes glide past. Señor Don Elegant Passenger opened his window. “Gracias, gracias. Thank you señor,” he said to Magellan.

“It’s their 45th anniversary,” Pat blurted out, “his and hers,” he said, pointing to Magellan and me.

There was a brief conversation in Spanish in the car and suddenly, Señor Don Elegant had, in his arms, a white gladiola retrieved from a bouquet Señora Don Elegance was holding, and he was graciously extending the long, flowery stalk to Magellan. “For la Señora, on her anniversary,” he said with a flourish and a bow of his head.

Ever since receiving this gracious gift, I’ve pondered what the exact word is for this man’s gallant action. Writing this post and thinking back to our week in Sevilla, it came to me.

In Sevilla’s Maria Louisa Park, Magellan and I went to see the space decorated with ceramic tiles depicting scenes from perhaps the world’s best novel, Don Quixote, by Spain’s Miguel Cervantes, written in 1605. Funny, philosophical, ironical, modern—all these words describe the book and Cervantes’ hero, whose love of chivalrous romances is seen as a mockery of his time. Or not.

In Parque Maria Luisa, the monument to Miguel de Cervantes, the benches depicting scenes from his novel Don Quixote painted on ceramic tiles

In Chapter 25, Don Quixote wants Sancho to go home and tell Dulcinea he's gone mad because of his love for her. "Mad I am and mad I must be," he says, ­proving his madness by taking off most of his clothes and attempting a headstand

“Good actions ennoble us, and we are the sons of our own deeds,” says Don Quixote.

Searching further (I know, digression is my habit), I found the word for Señor Don Elegant Passenger’s gesture in a review of Don Quixote by Ford Maddox Ford.

The gentle idea of chivalry [my italics] is the one medieval trait, which, had it survived as an influence, might have saved our unfortunate civilization.

Behind the Brown Velvet Drape