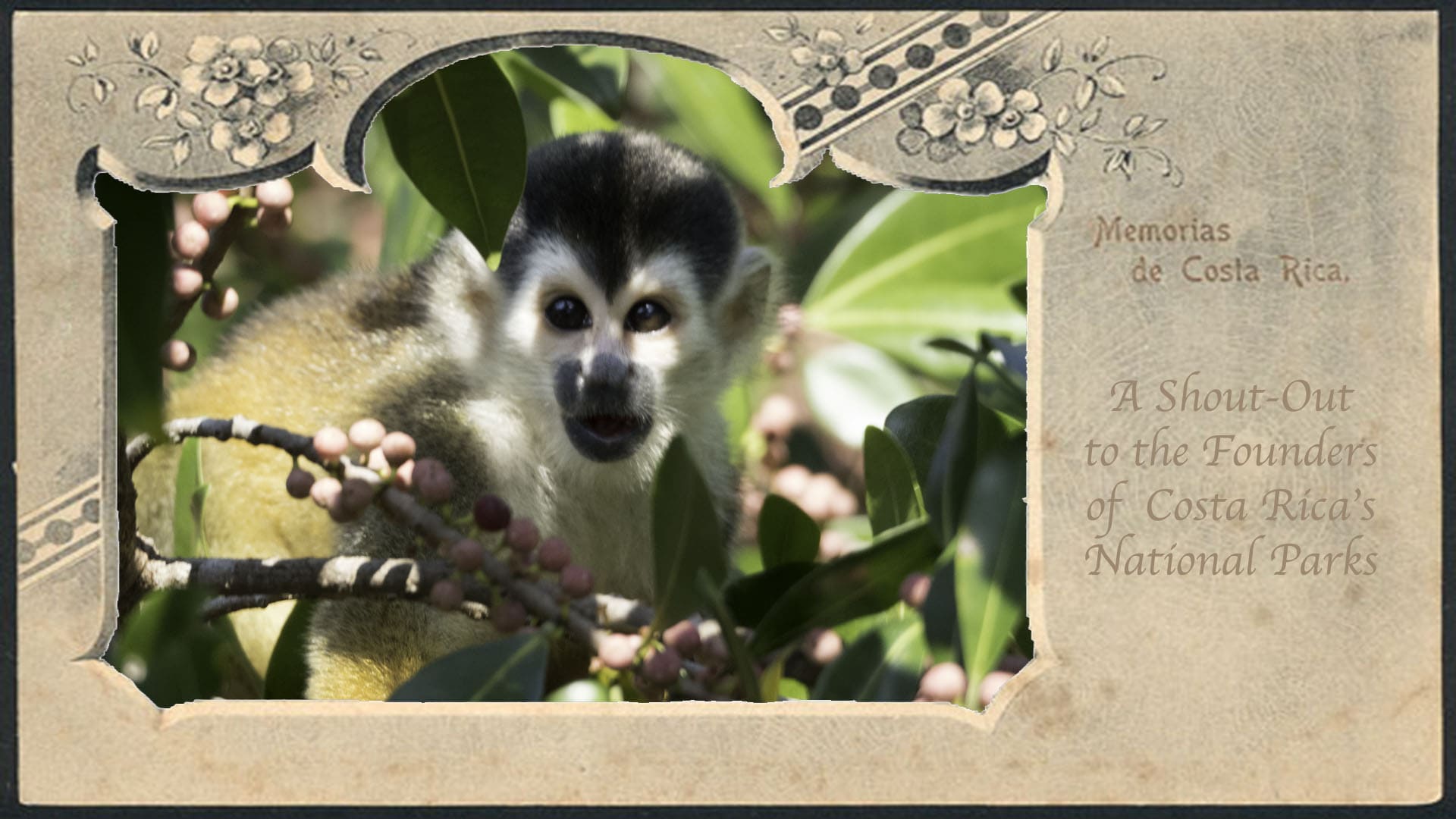 How did it happen?

How did Costa Ricans (Ticos) come to protect 28% of their country from development, to have a national park system that biologist Peter Raven has called “one of the great accomplishments of the human race over the last thirty years?” To have 6% of the world’s biodiversity, to be a superpower both in species and ecosystems (900 different bird species, 250 species of mammals, 800 species of ferns), when it’s such a small country, covering only 0.03% of the earth’s surface, smaller than Nova Scotia?

In the gardens at Catarata del Toro, an out-of-this-world flower

A Turkey Vulture at Leaves and Lizards Resort

The first answer we heard was that it started when Daniel Oduber, the country’s president from 1974-1978, saw a turtle half-killed by a poacher, her lower carapace missing, her entrails trailing as she struggled to lay her eggs on a beach.

From Spice's diary, "Sano Banano feels so much better knowing the story"

The hippie/bohemian town of Montezuma is about 2.5 km from Karen and Ollie's property

The couple shared many interests: biology, environmental and health education, and the cultures of other countries

On a walk along the beach from the Ylang Ylang, Magellan and I noticed this memorial plaque

The main trail is "The Swede's Path" and a secret cove at the border of Cabo Blanco is Playa Suecos, "The Swede's Beach"

Karen donated their property to the Costa Rican nation

That led us to Moon guide’s recommendation of David Wallace’s The Quetzal and the Macaw, where we discovered how this Scandinavian couple kickstarted Costa Rica’s land preservation soon after they arrived to the Nicoya Peninsula in 1955.

A Brown Pelican at Ylang Ylang, his pouch swollen with breakfast—it eats two kilos of fish per day

Twenty metres up a tree at Ylang Ylang, a dragons Green Iguana, two metres long, his back a protrusion of leathery spikes

Nature lovers, entranced by the howler and capuchin monkeys, the Wessbergs bought a steep piece of jungle near Cabo Blanco, at first living off the land, then gradually planting a fruit orchard. Early hippies. In December 1960, they noticed a nearby square of jungle had been axed. On Boxing Day Olaf wrote an appeal that was published four months later in the American magazine World League Against Vivisection. Even before Rachel Carson’s Silent Spring (1962) there was a new willingness in the US to support the environment—and the Wessbergs were the first to attract American capital to Costa Rica for this purpose. The Philadelphia Conservation League stepped up first, followed by the Sierra Club, The Nature Conservancy and Friends of Nature. By springtime, government biologists from San José, Costa Rica’s capital, were surveying the area’s suitability for a nature preserve. In less than two years, Costa Rica dedicated 1,250 hectares to Reserva Natural Absoluta Cabo Blanco.

On the Osa, an Owl-Eyed Butterfly—Costa Rica has 10% of the world’s butterflies

A Quesnella Liboniana at the Lankester Botanical Garden outside Cartago

At Rio Celeste Hideaway, a Blue-Gray Tanager, its short, stubby wings an asset to gliding through the undergrowth

It’s not as if things went smoothly for the next seventy years.

Olof had to go to San José twenty-three times because the government never answered his letters. Although Costa Rica had declared two “paper parks” in 1939, no money was allocated to them. When wardens were sent to Cabo Blanco, more than a few of them cut down trees and killed monkeys. Between 1950-1990 one-half of the country’s forest cover was burned to clear pasture for cattle. Ranchers from the north sent gangs of workmen to chainsaw the land. Development began in the 1960s, mostly logging and rice cultivation.

In 1969 the government, led by José Joaquín Antonio Trejos Fernández, mandated a park system, albeit under the Agriculture ministry, and made Mario Boza, at the tender age of only 27, its first fledgling director. Mario had gotten the government’s attention. After a scholarship enabled him to visit a national park in the Smoky Mountains, he wrote an editorial in the local paper saying he thought Costa Rica should be establishing national parks. Personally, he knew José Figueres, the unprecedented three-term president of Costa Rica (his last term was 1970-1974) who instituted many major reforms, including abolition of the armed forces. (Costa Rica to this day has no army.) Although the president wasn’t especially interested in national parks, First Lady Karen Figueres was, and deserves much of the credit for her influence on her husband’s good work in this field. Even with her encouragement, Mario’s proposal to create a national park in the Osa Peninsula (“a 2,400 hectare mini Galapagos”) failed to get government support. A Japanese company wanted to buy the forest and grid it into chips to pack stereos. An American firm wanted to start a huge citrus plantation on logged area. Squatters were killing tapirs for fun. Wealthy Americans wanted to build homes and dredge for a marina…

Olaf had gone to the Osa to look for wild avocado trees to graft onto his orchard stock. But as David Wallace writes, “He probably also wanted to add his voice to the rising chorus of alarm about the situation.” Olaf was murdered by a guide he hired, quite likely a hitman hired by opponents to the creation of Corcorvado Park.

A squirrel monkey in the Terraba Sierpe Mangrove (notice the baby)

At Bosque del Cabo, a Golfo-Dulce Anole enlarges by extending his dewlaps

Motmots, like this one in Mistico Arenal Hanging Bridges Park, have pendulous twin-feathered tails

In 1979 Mario finally convinced the government to set up the National Parks Foundation with five board members: himself, Alvaro Ugalde (a gregarious biologist who went on to serve as park service director for two decades), José Maria Rodriguez, Pedro Leon and Luis Diego Gomez. Mario’s goal was,“Not simply to preserve remnant wildlife and scenery for sentiment and recreation—as park systems have traditionally done—but to perpetuate all of Costa Rica’s biological resources—habitats and ecosystems as well as scenery and wildlife.”

Mario and Alvaro recognized the need to hire local people not just Joséfinos. They organized a system of regional conservation units. They attracted UNESCO’s interest and created La Amistad Biosphere Reserve. Their ultimate goal was to maintain Central America as an ecological bridge. As Alvaro said years later, “We were influenced by biologists, not just a few park planners from the U.S. So recreation and scenery were secondary.” Today, Costa Rica counts twenty-eight national parks and reserves, three that are UNESCO World Heritage Sites. Forest cover increased to 51% by 2005, up from 21% in 1987. About one-third of the country’s landmass is under some form of protection.

On the Terraba Sierpe Mangrove, a Ghost Crab

At Lizards and Leaves, Great Curassows, large and robust with long tails and prominent crests of erectile, "forward-curled" feathers

Ferns! Costa Rica has more than 800 species, more than in all of North America, some large enough to "grace a cello"

So where did the government get the money to purchase all this land for national parks?

To develop the first visitor centre (at Poas National Park), Costa Rica negotiated a 1.8 million loan from the Central American Bank of Economic Integration—the first such loan in Latin America. In 1981 they received $300,000 from the Caribbean Conservation Corporation and ~$5,000 from the World Wildlife Foundation. Six years later Costa Rica completed its first debt swap for $5.4 million worth of credits. Strategically, they encouraged private reserves. Two of the finest in the country are La Selve, owned by the Organization of Tropical Studies, and Monteverde (where Magellan and I spent three happy days), owned by the Tropical Science Centre. And as we’ve talked about in so many other “Postcards from Costa Rica,” in every place we stayed—albeit some more than others—the owners have established wildlife preserves, replanted with indigenous species and are encouraging responsible tourism. Including Karen Wessburg, who after Olaf’s death moved into Montezuma and operated her own small hotel—now the site of the Sano Banano Hotel where Magellan and I stayed—while working to the end of her days on preserving Costa Rica’s biodiversity. In her honour, Asepaleco, a communal non-profit association for conservation and environmental education, established The Karen Mogensen Nature Reserve in the mountains of the Nicoya Peninsula, 960 hectares of protected land and an additional 12,000 hectares of secondary forest surrounding the reserve.

As is so often the case, no one woman (or man, or however one identifies oneself as a human) deserves the credit for Costa Rica being called “the living Eden” by scientists and naturalists around the world—it is the result of an intelligent diversity of characters, public and private, local and foreign, then and now. Including thousands whose names are missing in our story.

A Green Iguana, also at the Osa Interactive Garden

Isn't she a beauty? A Giant Grasshopper at Corcovado National Park

The incredibly camouflaged Corcovado pootoo, one of Costa Rica’s seventeen species of owls

A Collared Aracari, also called tuncancillos (smaller and sleeker than a toucan) at Rio Celeste Hideaway

How refreshing—perhaps even more today—to hear Alvaro’s words, a philosophy we here in Canada, locally, provincially and nationally, would do well to heed:

I will not resort to tourism as a way to maintain parks. Management of the ecosystems in parks in perpetuity is the Park Service’s main goal. My personal goal is get public and government recognition of the parks program, so that when the average citizen says ‘park,’ he doesn’t just think recreation. The word should call to mind the complex of values associated with maintaining life support systems within the parks. What I want is for every citizen in this country to see parks on the same level as health, education, and defense.

Baker, Christopher. Costa Rica. Berkely: Avalon Travel, 2015. An early advocate of independent travel (1973) and written by journalists who have lived in the countries they write about, Moon guidebooks are our favourite.

Agneta Tjäder, Agnetea and Tidning, Ulricehamns. “Olaf Wessberg, the Founder of the Cabo Blanco Na􏰀tional Park.”Aug 8, 2000. For more photos of Karen and Olof and their life, this article, translated from  Swedish to English, is an interesting read.