Dalí opened his Theatre-Museum in 1974 and in 1989 he died here, where he is buried in his own personal mausoleum

Car Naval Rainy Taxi, 1974-1985. When you add a coin, it rains on the mannequin driver inside Dalí’s Rainy Cadillac

Leda Atomica, 1949 (a copy hangs in Portlligat) Dali developed the paranoiac-critical method of art arguing that to unlock the marvelous, one had to be in a frenzied state like a hallucinating madman

Dematerialisation Near the Nose of Nero, 1947

Gala Nude Looking at the Sea Which at 18 Metres Appears the President Lincoln, 1975. In his paintings, Dalí made use of fractals, structures that split into smaller replications of themselves like broccoli

Gala Nude Looking at the Sea Which at 18 Metres Appears the President Lincoln, 1975
“Gala Salvador Dalí” was often how he signed his artwork

Gala Nude Looking at the Sea Which at 18 Metres Appears the President Lincoln, 1975

Gala Nude Looking at the Sea Which at 18 Metres Appears the President Lincoln, 1975

Catalan plastic loaves of bread, phallic in shape, were one of Dalí’s recurring images. “Bread has been one of the oldest subjects of fetishism and obsessions in my work, the number one, the one to which I have been most faithful.”

The barrel organ in this sculpture, said to have been owned by two street musicians from Figueres, was rescued by Dali and turned into this surrealist object

Help again! We don't have the name for "big bird with surreal belly" either.

Face of Mae West Which Can Be Used as an Apartment, 1974; the works of art are arranged to create an illusion of her face: the drapes are her hair, couch is her lips, the fireplace her nose and paintings represent her eyes

Help! We don't know the name of this beautiful jewelled bird.

Sleeping Beach, 1974 by the local painter Antoni Pitxot, whose work this is, was one of Dalí’s best friends

Having rented an apartment for a week in Barcelona, we decided to immerse ourselves and see the Dalí–Gala triangle: the Casa-Museu Salvador Dalí in Portlligat, Dalí Theatre-Museum in Figueres and Púbol Castle. For us, the first place, what I refer to simply in this story as Portlligat, is the hero/heroine of the trilogy.

Portlligat is a little white love story. It’s an elongated connection of whitewashed fishermen’s huts that was Dalí and Gala’s primary home for 40 years. Rosemary Bailey describes it as “a ziggurat of wedding-cake white walls and burnished terracotta roofs stepped down to the sea.” We got to visit it twice (which you may notice from our clothing in the pictures), but that’s another story.

Months in advance, I booked the obligatory one-hour tour of Portlligat, which is so small that only eight guests are allowed inside per tour—and you have to check your handbag across the street!

The tour doesn’t give you all the backstory —so here it is, in case you don’t already know it.

Every summer from the time he was four years old, Dalí’s family travelled from their home in Figueres to the isolated fishing port of Cadaqués where they rented a rehabilitated stable, practically the only structure in the area back then. They’d boat around the peninsula to the tiny fishing harbor of Portlligat where Dalí’s early paintings were inspired by the phantasmagoric rock formations morphed by the gale-force tramuntana and swirling seawater. Dalí described the landscape as “a grandiose geological delirium.”

Early on, his notary father and cultured mother were aware of their son’s prodigious talent and idiosyncratic ways—like spending summer nights in the cemetery, throwing fistfuls of pebbles in the air to see how many touched him when they fell and reading Edgar Allan Poe. When he was five, his parents took him to the grave of his elder brother (also named Salvador, who died before his second birthday) and told him he was the reincarnation of the dead infant. Near their cottage at Cadaqués, they rented a room in a fisherman’s barraca (a stone-walled fishing shack) as a studio for their son who painted sea scenes from afternoon to dark. They sent him to the Figueres Municipal Drawing School and, at the age of 17, to The Academy of San Fernando in Madrid. He was expelled from the latter just before his exams for saying no one on staff was competent enough to test him, living up to his moniker, the “Child King.” He went to Paris, explored avant-garde art and grew that infamous moustache.

By this time, Cadaqués had become a fashionable tourist resort attracting artists and poets. Dalí began spending summers here with the poet Frederico García Lorca, their infatuation with each other leading to the speculation of a gay love affair. Vanity Fair reported that Dalí was a virgin “who feared female private parts” and “what Dalí really got off on was candaulism.” The model Amanda Lear, whose sex at birth is debated, was a close chum of Dalí’s for 15 years but from reading her book, My Life with Dalí, a withholding story if there ever was one, I’m none the wiser.

Pivotal, pivotal to Dalí’s life was seeing Elena Diakanoff Devulina—Gala—bathing on the beach in Cadaqués the summer of 1929. He instantly fell in love with her.

Russian-born, Gala was an intense beauty, often appearing bare-breasted and carrying on with the local fishermen despite the presence of her surrealist-poet husband and eleven-year-old daughter. Dalí wooed her mercilessly. Did she love him? Only want to exploit his potential as an artist? Or was it both? She left her family to become Dalí‘s artistic guide, lover, muse, mother-figure, collaborator, controller—and in 1934, his wife.

Dalí‘s father, angry over this adulterous affair, banished his son from Cadaqués, so in 1930, Dalí bought the first of the maze of barracas that make up Portlligat from a fisherwoman “witch” he’d known for years. The tiny shack was only 21 square metres: unheated, without running water and lit only by candles.

The first room you enter is Bear Hall, where the moth-eaten, necklaced, taxidermied guard animal holds a lamp doubling as an umbrella stand and letter holder

Sea urchins, the prize catch of Portlligat fishermen who traded them as far away as Africa, often appear in Dalí’s art

Dalí’s Studio, displaying the last art he worked on here, faces the Bay of Portlligat

Dinner among the rhinoceros horns, candelabras and window view of the postcard sea

Nuggets to explore in every corner

The bedroom of the "Child King" and his "Queen"

Gala and Dali lived here for six to seven months of every year, wintering in luxury hotels in Paris or New York

Magellan and I had read that Portlligat was “the most extraordinary home in the world.” The multi-level labyrinth of sugar-cube white barracas (no two the same size or shape) has certainly inherited the iconography of its surrealist master.

Our guide pointed out some of the intensely private effects among the hodge-podge of kitsch, like the tiny cage in which Dalí kept crickets (whose chirping he loved), the dolls, mannequins, optical instruments and proliferation of books (his uncle owned a bookshop) covered in matching papers

Despite the idiosyncratic objets d’art, there’s a playful serenity in the fishermen’s nets, the statue with a tuba and the three Goldilocks chairs.

We both felt the quiet beauty of the whitewashed walls, the soft yellow of Gala’s favourite everlasting flowers and sofa fabric, the local esperato matting and the irregular-shaped windows capturing the surrounding landscape. You can almost hear Gala reading to Dalí as he painted up to 12 hours a day, thoroughly disciplined and stopping only to eat, nap or swim, Wagner playing on the gramophone.

Gala and Dalí were larger-than-life figures with an outsized talent for self-publicity. Incongruously, the rooms are cosy, the furniture somewhat miniaturized; Magellan and I felt like we were invading their intimacy.

Which is exactly how Portlligat was designed. Most guests (René Magritte, Andy Warhol, Marcel Duchamp, the Duke of Windsor, Coco Chanel, George Harrison, Keith Richards, Walt Disney: Dalí was star-obsessed) were almost never invited inside—all the entertaining took place on the white-walled patio where lobster with chocolate sauce was consumed on the hot-pink Sofa of Lips alongside the phallic swimming pool.

Silvery olives grow out of a giant teacup in the outlandish Dalí Wonderland, which was built after WWII

The limestone pathway was lined with pomegranate trees; its fruits were Dalí’s favourites 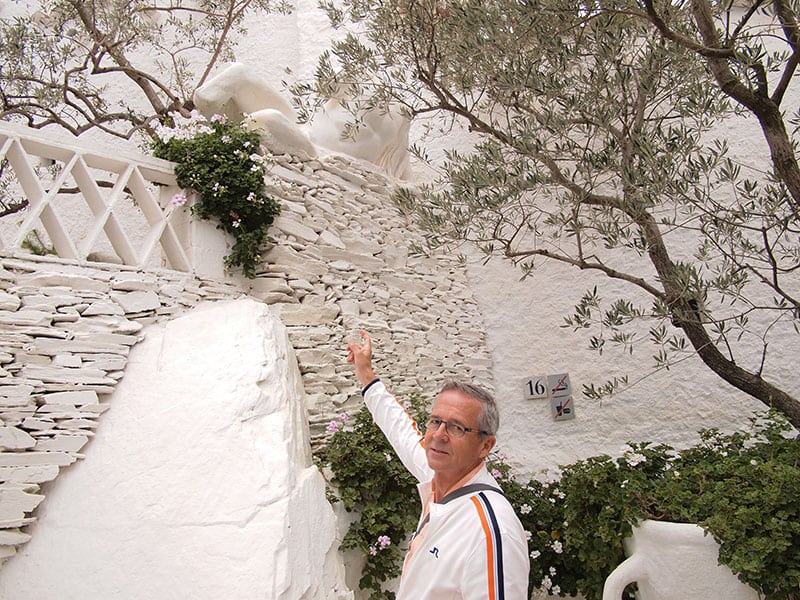 Magellan points out an interesting sculpture

Dalí relied on the Michelin tires on his Cadillac to get them to Cadaqués, Figueres and beyond—Gala always drove and changed the flat tires

Gail, Spice and Sue on the Mae West Sofa of Lips

The phallic-shaped swimming pool, “beautiful despite its suggestiveness,” was built in 1967

Dalí and Gala entertained frequently, the Child King and his Queen seated on white thrones

No two archways are the same

How would Freud interpret this arrangement?

The fountain of excess?

We loved this corner of the garden

Below the garden, Dalí built a slate pathway, the Via Lactea (Milky Way)

Dalí frequently used the egg, symbolizing hope and love and, like many of his objects, imbued with a latent sexuality

What a chick magnet!

Dovecote of the Pitchforks: Dalí loved to watch the birds at night

Sue at Dovecote of the Pitchforks

Gail and Spice above the shallow sea, perfect for the naked swimming Dalí and Gala enjoyed

To escape the tourists, in the 1970s Dalí started swimming in a solitary cove full of algae—which he liked the feel of. “From now on I won’t be able to have a bath at home unless some noodles are thrown into the bathtub,” he said.

Dalí claimed he and Gala were the children of Jupiter and Leda, hatched from eggs like these in his garden, and that when they broke the shell that protected them, they became immortal brother and sister

Some say the crack is a metaphor for Dalí's open-mindedness

In his autobiography, Dalí wrote that Gala was “the one who moves forward, my victory, my wife, my Gradiva.” The name comes from the title of a novel by W. Jensen and the name of its heroine, Gradiva, who psychologically heals the main character—Sigmund Freud. 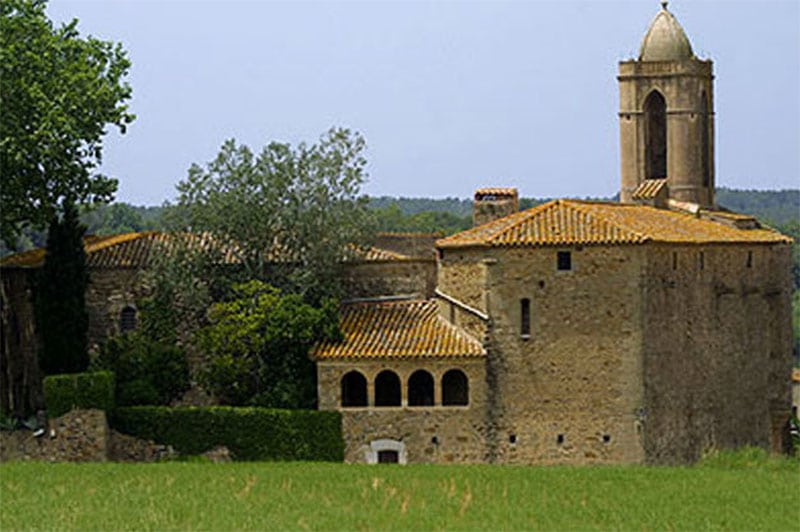 Dalí bought the walled Púbol Castle, 80 km from Portlligat as a gift for Gala. She moved here in 1971, indulging her nymphomania with countless young lovers—Dalí couldn’t go there without her invitation

Gala, who was a decade older than Dalí, died at Púbol in 1982, causing Dalí to fall into a deep depression, leave Portlligat and reside here 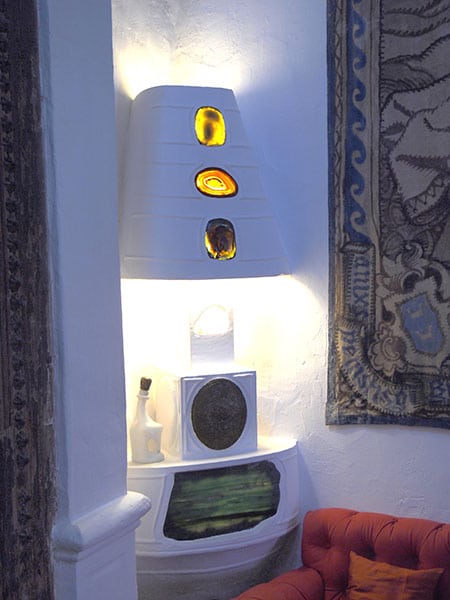 Gala is buried at Púbol Castle

A nod to Giacometti? Dalí’s works referenced the natural world, Renaissance artists, history and current events like the bombing of Hiroshima

Portlligat reveals Dalí and Gala’s little white love story which, like his art, was serious, bizarre, controversial and, ultimately, monumental.

Ingram, Catherine. This is Dalí. London: Laurence King Publishing, 2014. This is the best book on Dalí that we’ve read. I believe Andrew Rae’s illustrations would lift Dalí’s “gravity-defying” moustache.

I wish I could write like Rosemary; this is a great portrait of Portlligat.

Lear, Amanda. My Life with Dalí. UK: Virgin Books, 1985. Most of all, I remember she nearly always wore her purple velvet dress at Dalí and Gala’s parties.

Everything you need to know about visiting the three Dalí museums in Spain is here.

A solid review of Dalí’s life and works on the occasion of a retrospective to mark the climax of a worldwide celebration that began in Spain on the 100th anniversary of his birth.

Govern Yourself
Scroll to top