Spice chipped in, “This road isn’t even on my map, but that turn has a Do Not Enter sign, and the other is Pedonale Only.”

Before leaving for Sicily, we had visited my mother-in-law who had just moved to a different care facility. One of her neighbours pleaded, in a high-pitched voice, “Please Help Me!” each time we passed her open door. She was lost and confused in her new home, sort of like me driving in Sicily. 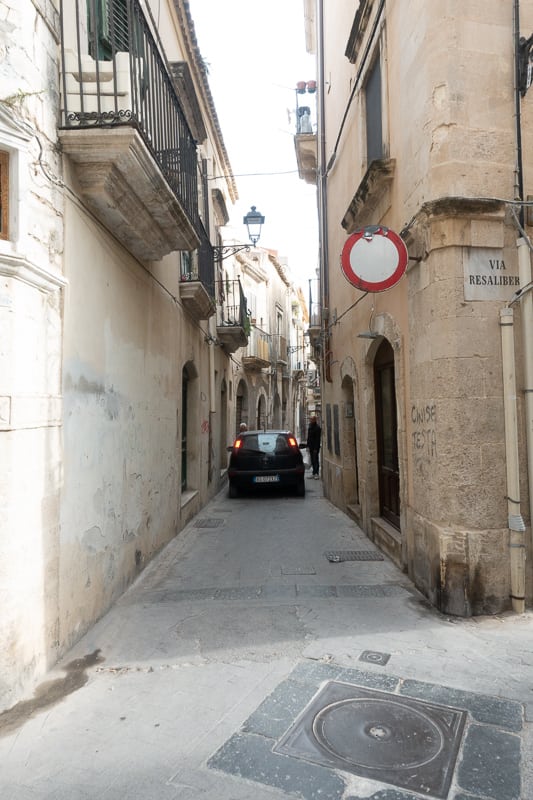 One of the easier drives TomTom got us on through a Sicilian village, but I wonder what that traffic sign means?

I really needed help in Castiglione de Sicilia near Etna North. As I drove up to the top of the town to our B&B, a local driver coming down toward us rolled down his window and wagged his finger at me. “No! No! Your car too big!” (And likely saying, “You stupid foreigner!” under his breath.)

“Spice, fold in the side-view mirrors. How much room on your side?”

“A couple of inches.”

We abandoned the car, searching for help as the laneway got even narrower. Later that night, we met a local guy who cautioned us about driving through that spot. “A Ferrari went through there this summer, but it took about three hours—it was tight, very tight!”

Another place I was confused was getting into Marzamemi, a charming port with a history of tuna fishing in southeastern Sicily. After looping around on a long, one-way street, it appeared that the only entrance to the town was barricaded. “Just go in there, “said Spice. “Who cares about that ZTL sign (Zonal Traffico Limitee)?”

“If we cross that line, the surveillance camera will report us to the Cabiniere and we’ll get an eighty-five Euro fine in the mail,” I cautioned her.  “Please Help Me!”

Spice got out and checked with two nearby construction workers. They assured her the camera wasn’t working, in fact it hadn’t worked for a few years they told her, so go ahead and drive around the barricade. Visions of my mom weaving past a detour through a construction zone flashed through my mind and I wondered if I’d be as successful as she was when the police met me on the other side. 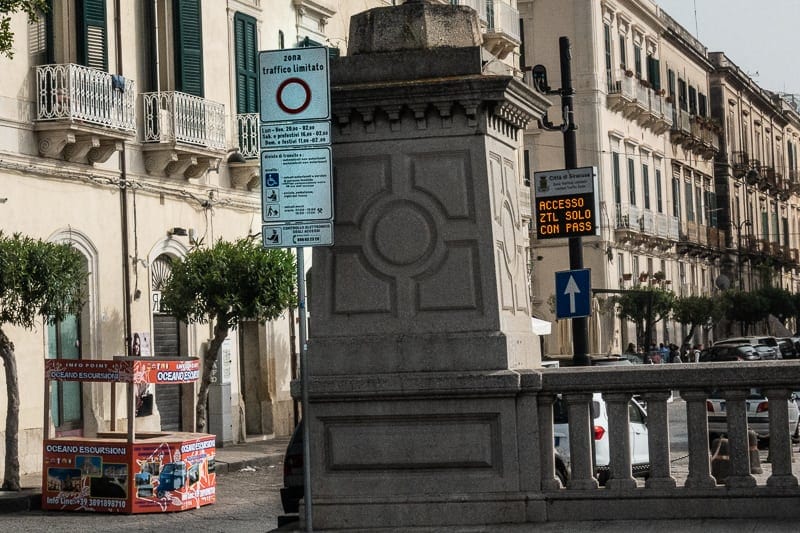 The red circle means Don’t Do Anything unless it is excepted. This ZTL in Ortigia is applicable: Monday to Friday from 20:00 to 02:00 the next day; Saturday and the day before a Holiday from 16:00 to 02:00; Sundays and Holidays from 11:00 to 02:00 (Is today a Holiday or the day before a Holiday??) Except if you are handicapped, police, an ambulance, a local resident with a pass or making a delivery on weekdays (the crossed hammers) at certain times.

Sicily has a population of 6.2 million, 2 million cars and 1.1 million parking spots.

You have to pay in blue areas, except during afternoon siesta and on weekends and public holidays if there are crossed hammers (go figure) on the sign.

If there are no lines, it seems you can parallel park, diagonal park or double park. Unless a parking cop arrives and blows a whistle. In which case you have to move your car. But they have to blow three times and give you reasonable time, so you can easily finish your espresso and kiss all your friends bye-bye.

When the German army retreated from Sicily, they blew up sections of road to slow the Allied forces. In the mountains, many of the craters, and I’m sure they’re the same ones created in the 1940s, still wait on repair. Some have a blue downward-facing warning arrow; some do not. At times it seemed our Fiat was part of the 10th Canadian Airborne division.

We have never bought CDW insurance for rental cars, except in Sicily. The rental agent was persuasive. “You need it for a peace of your mind!” Was it a correct decision on our part? In hindsight, probably not. Sicily’s roads and other drivers are better than you will ever read about. After driving 2200 km, we had only one small mark on our Fiat—a paint chip on the driver’s door. 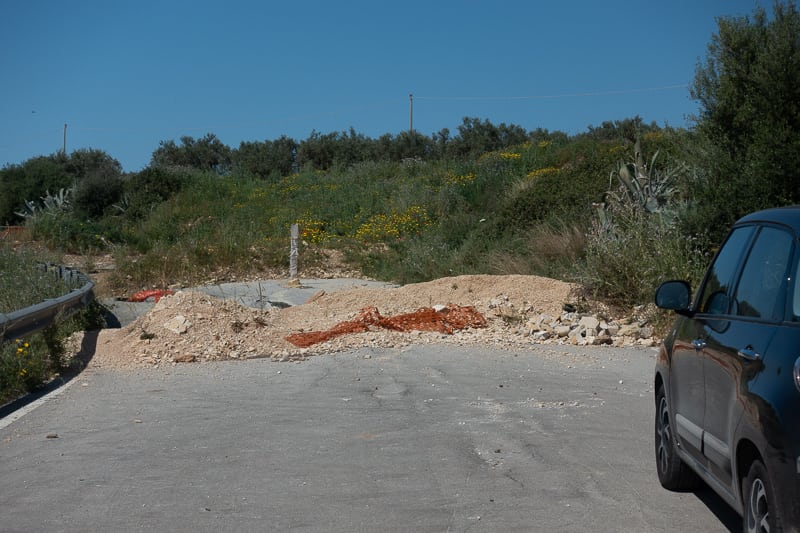 Recall that we were served a speeding ticket five months after returning from France. I knew that Sicily had some permanent speed cameras that would be flagged by our TomTom. Checking The Google before we left home I found that Italy also has Speed Tutours, overhead cameras that average your speed between points, but they’re mainly in the vicinity of big cities like Rome and Milan. So what were the overhead cameras that appeared frequently in the weirdest places on the roads in Sicily?

Mateo, our host at Tasca Regaleali—an area with some of the worst roads—confirmed that they were speed-averaging cameras but because Sicilian drivers love to speed, “They’ve all been disabled by the locals, so don’t worry.” I know I was driving too fast when I passed a few of these cameras but I had to keep ahead of cars like a local Alfa Romeo sniffing my tail-pipe—Sicilian drivers love to cozy up to the car in front of them. So now I have to wait another few months to see if I’ll get a ticket. It reminds me of a T-shirt with the saying, “Worrying is a waste of imagination.” But you can see why I was worried when driving in Sicily. “Please Help Me!”

Noto: Been (and Loved it)

Pantalica: Paradisical Necropolis with a Hike to Die for

My Quest for the Spirit of Haida Gwaii

What Happened at Mesa Verde?
Scroll to top