Only Thirty Years and Eleven Months to Go

If our marriage lasts, we’ll celebrate our 50th wedding anniversary next Friday!

What do I remember of that day in September?

The sheaves of wheat that I collected and affixed to the church pews. Our enscribed napkins, orange with blue asters, which I was so pleased with because in those days everyone had plain white. My bouquet of fragrant, white stephanotis and jasmine, which couldn’t be found when I arrived at the church—soon discovered by our chauffeur friend, Barry G, where they were supposed to be, in the trunk of the car he was driving. My sister Joan, our four-year-old flower girl, so cute. The many glowing comments on the food, prepared for 150 people by the Crystal Springs United Church Ladies Aid: turkeys, hams, potato salad, mashed potatoes, garden vegetables… And the midnight supper at the dance: homemade buns, cold cuts, cheeses, pickles, squares, cakes…The orange slacks I sewed for my “going-away” outfit (to Prince Albert for two nights before going back to university) to go with an Italian sweater, cabled in orange-and-yellow that I’d splurged on—and still have! (I also designed and sewed my wedding dress; if you look closely you can see the uneven hem.)

And what does Magellan remember?

“The groom’s party and friends rented the whole hotel for $20 a night—all seven rooms with a bathroom down the hall. One room had a lock. In another room the bed’s broken legs were replace with a coke case and a log. According to the register the last guests were “Mr. and Mrs. Smith.” The proprietor scraped most of the rings off the tub with a razor blade so we could pretty up for the big ceremony. The night before included a lot of reminiscing and a bit of drinking, or was it the other way around? The next day we struggled between helping and not getting in the way. In the end, the church and hall were beautifully decorated. The bride was gorgeous—I couldn’t wait to say “I do” and put a ring on her finger. (I know, isn’t he sweet…) While the wedding party left for two hours to the big town of Melfort for photos, our guests reminisced a lot and drank a bit. We got some confetti in our hair and our best man’s father’s car got so much in the heat vents that he could re-live our wedding for the entire winter. The dinner and toasts reflected the joy of the occasion coinciding with the end of harvest. The evening started with dancing to 45s and 78s but ended with some local farmers jamming country standards. It was a shame to leave after the midnight supper. The party was just getting into full swing.”

How many marriages make it fifty years I wondered. Take a guess:

According to Stats Canada from 2011, you’d be right if you guessed (c).

We’re not the first among our friends and family to reach the 50-year milestone. Both sets of our parents. Numerous aunts and uncles. Among friends, Wade and Sheryl, Marilyn and Skip, Orval and Arlene, Sara and Tony, Fred and Sheila, Monica and Stu…

In our families, the longest-married couple is my Aunt Ethel and Uncle Ross who celebrated their 70th anniversary July 12 (beating out Grandma and Grandpa Danchuk’s 68 years together and Magellan’s Uncle Dick and Aunt Max who made it to their 64th). I couldn’t find Canadian stats for this, so take a guess at how many Americans have marriages lasting seven decades:

According to 2015 stats from The Washington Post you’d be right if you guessed (c).

How about 80th wedding anniversaries? This June when we were at “The Pit,” a bar in Dawson City, I noticed this photo.

Annie and Joe (1993) when they'd have been married 72 years (Photo: Tr'ondëk Hwëch'in Heritage)

Joe and Annie Henry still hold the record for the longest marriage in Canada’s history—80 years and ten months! (CBC has it wrong, saying it’s Bill and Gertie Nickerson from Nova Scotia, but there’s was 80 years and five months.) Annie and Joe’s Canadian record for the longest marriage was surpassed by an American couple, Zelmyra and Herbert Fisher, who made it to 87 years.

Joe was 23 years old when they got married on July 15, 1921; his young bride Annie Mitchell was only 17. Yukon pioneers, they hunted and trapped together on the Blackstone Uplands, living in Moosehide and Dawson City and raising twelve thirteen children.

Instrumental in the construction of the Dempster Highway, Joe acted a guide, breaking trail and determining the best route for the Cat train to follow from mile zero Ogilvie Ridge. When we drove the Dempster Highway, I read that before it was named after Corporal William John Dempster of the Royal Northwest Mounted Police, it was called the “Joe Henry” or “The Joe and Annie Henry Highway.” (What we didn’t know is that at Km 112 of the Dempster Highway, there’s a plaque dedicated to Annie and Joe.)

Joe was known internationally for his craftsmanship in making snowshoes and other bush tools. Annie was an expert at making beaded moccasins. In later years Annie and Joe recorded stories of the land and the Hän language to ensure the culture and traditional knowledge of the Tr’ondëk Hwëch’in was passed on for future generations. Joe died in March 2002 at the age of 103; Annie in October 2005 at the age of 99 or 100, her exact birthdate is unknown.

Monument to Joe and Annie Henry on a rock shaped like an arrowhead (Photo: ExploreNorth)

Harreson Tanner sculpted their faces in clay and Béla Simó cast them in bronze (Photo: ExploreNorth) 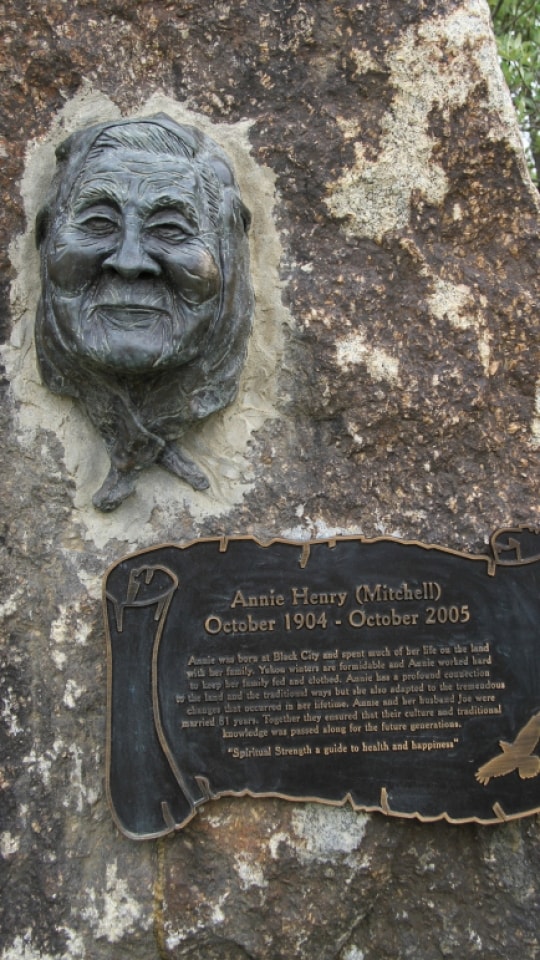 Their granddaughters wrote the words for their plaques (Photo: ExploreNorth)

Who knows, if we live beyond July 2050, when I’ll be 100 and Magellan just north of 102, we might be Canadian record-holders! In the meantime, on our way home from Norway we’ll be celebrating our 50th at Aizle Restaurant in Edinburgh with our granddaughter Clare and her friend Keenan. Why there? Clare is doing her masters at the University of Edinburgh and Keenan is doing his at the University of Glasgow—why not celebrate with the young?

From Explore North here’s more about Joe and Annie and even more from Tr’ondëk Hwëch’in.

A Picture and a Poem

My Quest for the Spirit of Haida Gwaii

Oh Those Romans
Scroll to top