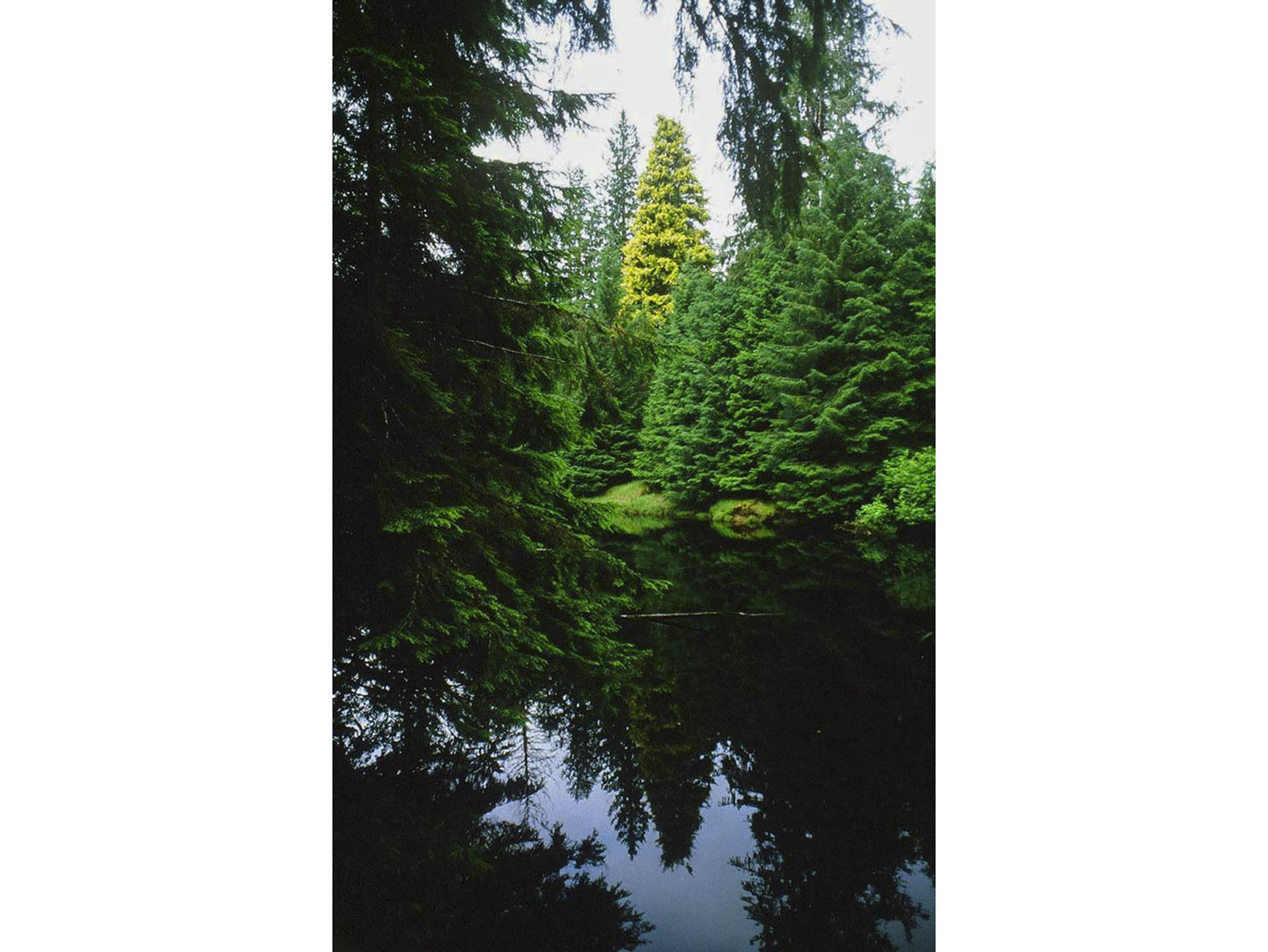 “I think he’s alive and living in the bush in Alaska like hundreds of other guys,” said Dale, the volunteer at the Port Clements Museum in his black fisherman’s cap and black T-shirt when I asked him if he thought Grant Hadwin was dead. “He left his pack above the high-tide mark; that’s the giveaway,” added Dale.

Do you know the story of the Golden Spruce and its tangled branches of mystery, myth and madness?

The Golden Spruce was a 300-year-old conifer famous for its canary-yellow needles. It stood in a few protected acres of old-growth forest that MacMillan Bloedel had set aside in the Yakoun Valley of Haida Gwaii. On a cold night in January 1997, Grant Hadwin chain-sawed the Golden Spruce to death. The next day he flew to Prince Rupert and blasted out a fax explaining his action to the police, the Vancouver Sun, the Haida Nation, Greenpeace and MacMillan Bloedel.

I didn’t enjoy butchering, this magnificent old plant, but you apparently need a message and wake-up call, that even a university trained professional, should be able to understand. . . . I mean this action, to be an expression, of my rage and hatred, towards university trained professionals and their extremist supporters, whose ideas, ethics, denials, part truths, attitudes, etc., appear to be responsible, for most of the abominations, towards amateur life on this planet. 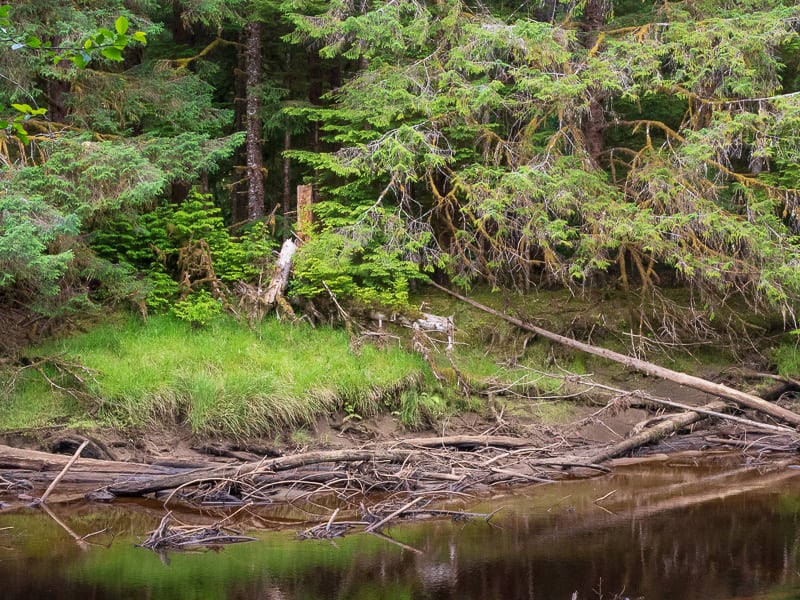 At night, in January, in the rain, Grant swam twenty metres across the Yakoun River in five knots of current, dragging his chainsaw, to get to the Golden Spruce

One of the guests on the Ocean Light 11 with us, Veda Hotel,  was on a school board assignment in Port Clements when it happened. Veda says

It’s twenty-one years ago and even now I remember the sadness, the questions and the angst of that day. The staff was in shock and disbelief. There were tears shed and also many unanswered questions. I was aware of the Golden Spruce but hadn’t realized how culturally important the tree was, not only spiritually but also as a point of interest to their town. I walked out to see the tree and even lying down its magnificence was clear. 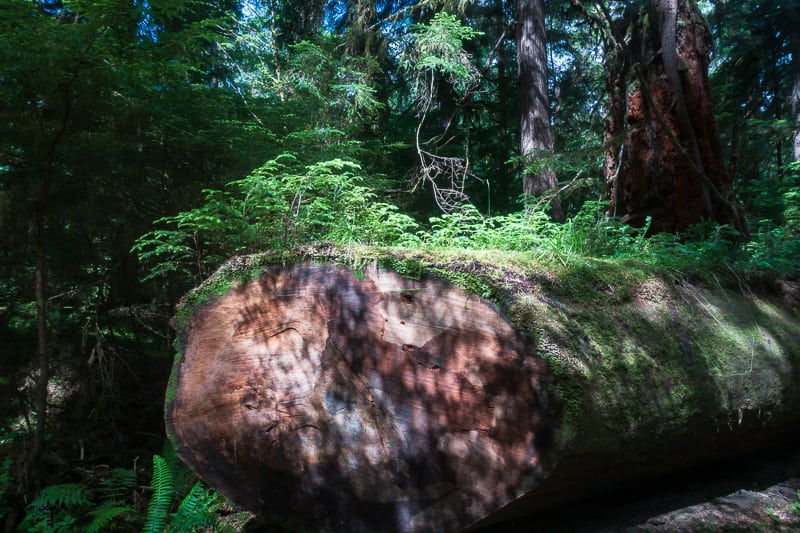 Near the scene of the crime where one theory is that the thick forest shaded the Golden Spruce from its intolerance to ultraviolet light, allowing it to live for so long

Grant’s trial was set for February 11 in Masset. Fearing reprisal from angry people on ferries or airplanes, he decided the only safe way for him to travel to Masset was to kayak across the deadliest body of water in the province, Hecate Strait. He didn’t showed up in Masset. Four months later, his kayak was found, broken but not pulverized, in Alaska. His sleeping bag and life preserver appeared unused. His axe was found above the high-tide line. And as far as we know, he hasn’t been seen or heard from since.

“There’s a whole binder of newspaper clippings over there about it. Even made the international news,” Dale told us. There’s also a book and a film. John Vaillant won a forest of awards for his vivid portrayal of the drama and psychology of this wilderness story in The Golden Spruce, a book that was made into the film Hadwin’s Judgement. 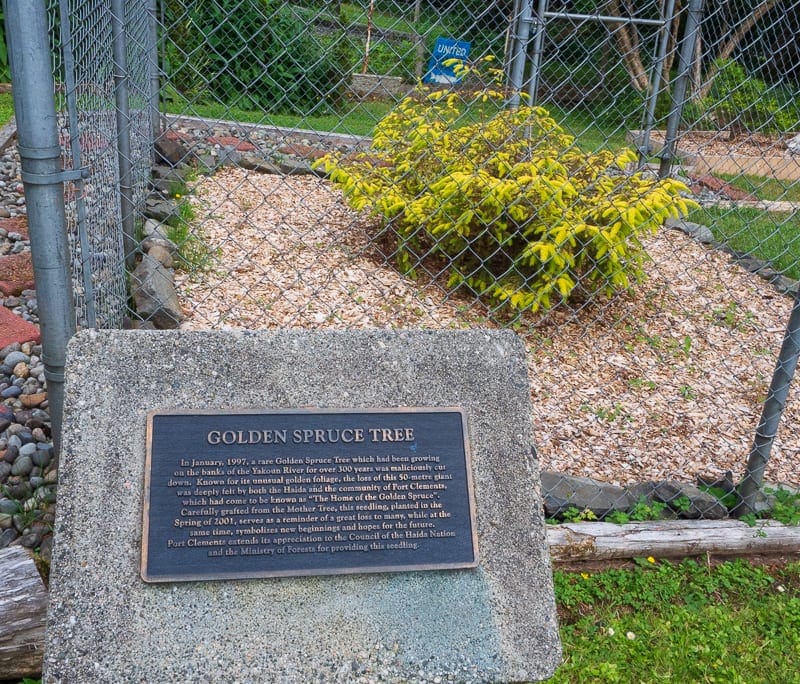 So you can see why we were keen to find out more and walk the short Golden Spruce Trail to the scene of the crime.

What drove Grant to swim across the swiftly flowing Yakoun River and chop down a sitka spruce as tall as a sixteen-storey building, a sentinel tree so unique it was named (K’iid K’iyass) and mythologized by the Haida, an albino tree (resulting from its inability to make the usual amount of chlorophyll) so rare that scientists also gave it its own name (Picea sitchensis ‘Aurea’), an “arboreal unicorn” that was a local attraction?

Grant grew up in a V7S postal code, Canada’s wealthiest, in West Vancouver. Against the wishes of his father, who graduated UBC at the top of his class in electrical engineering, Grant quit school and left home at the age of seventeen. He started out logging for his uncle. It was the 60s when old growth forests were being clear-cutted, leaving stools of Brobdingnagian-sized tree stumps—some of them six metres across. Strong and athletic, Grant became a formidable outdoorsman, the sort who’d be the last man standing had he been on “Survivor.” 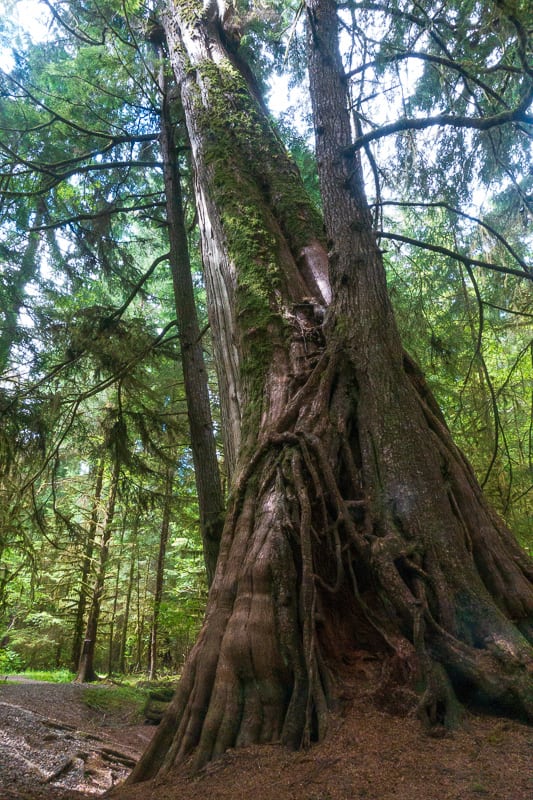 Working in forestry as a surveyor and other such jobs in Haida Gwaii and other BC rainforests, Grant became disillusioned with industry practices, disdainful of company men. “Half of those assholes have never been four feet from a parking meter in their lives,” is one of his lines in the movie The Golden Spruce. He cut to the chase, making his opinions clear to his bosses. But he was good at his job. I remember another line from the movie: “He wasn’t lazy and he wasn’t crazy,” spoken by a respected resident of Gold Bridge where Grant lived with his wife Margaret and four children.

Grant had his demons. His only sibling, an older brother who was a paranoid schizophrenic, committed suicide by jumping off the Lions Gate Bridge. I remember a scene in the film where Grant is crawling home drunk, an event that happened so often it became a local joke: “Look, that snow bank is moving. Must be Grant.” In 1991, he separated from his wife. Two years later Grant had a “spiritual emergency,” instructing him to deliver a message to humanity. He followed through with a fifteen-page manifesto, “The Judgment,” posing questions in the Socratic method (“If people are living in a disrespectful way instead of a respectful way and in an oppressive way instead of a compassionate way…”), summarizing history and declaring how the damage he saw in male-dominated civilization could be repaired. As John Vaillant writes, Grant’s answer was “to dismantle society as we know it, abolish all currency and religion, and remove all men from power. Replace the status quo with small, agrarian villages run by women and restricted to pre-industrial technology.” Finding it hypocritical that a mutant yellow tree was being protected while a healthy green forest was being flattened, Grant saw a way to make his point. He got rid of all his possessions, and planned and carried out his attack on the golden spruce. As John Vaillant writes

I see in him the human, collective struggle to reconcile our appetites and ambition with our need to derive our sustenance, if not wealth, from the planet—and, at the same time, to enjoy nature and celebrate its beauty and intactness. I feel that Hadwin lived on the sharp edge of that dilemma.

As we walked the Golden Spruce Trail on Canada Day this summer, we read the signposts describing the Haida legend. Supposedly not well known until after the tree’s demise, the story goes something like this. Once upon a time about three hundred years ago in a Haida village, its inhabitants were not respecting the land or the ocean, cutting the Yakoun forest and overfishing the salmon. In retaliation, the spirits blanketed the village in permanent winter. Everyone froze to death except for a boy and his grandfather. The grandfather decided their only hope was to leave this continuous winter blizzard. In a short time, they came upon a forest alive with summer. The grandfather told the boy to keep walking and not look back; for if he did, the spirits would carry him into the “Next World.” But the boy couldn’t resist. He glanced back and immediately, his feet took root in the ground and he was transformed into a tree, not an ordinary sitka spruce but one with golden needles. 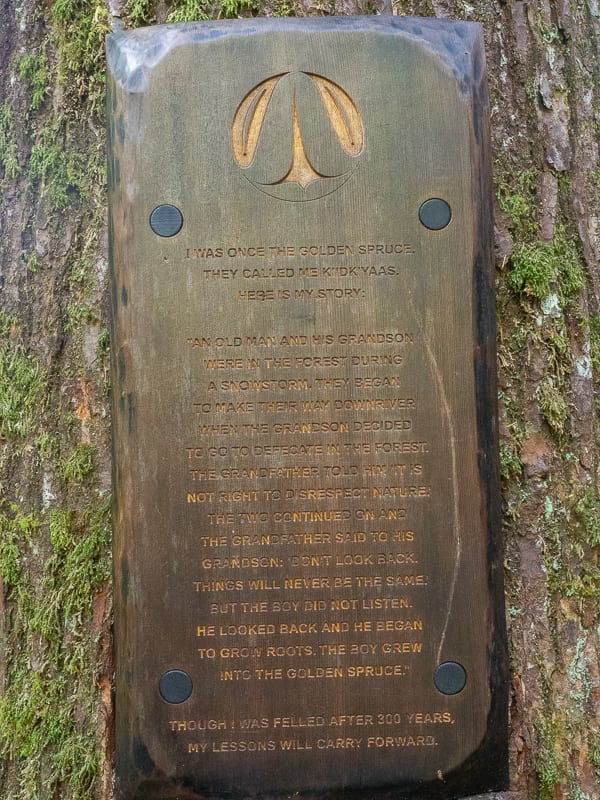 A few days later on our trip, Magellan met Ekhart Mendelman, a man who’d worked here in the forestry industry for many years. “The Golden Spruce attracts more people now than when it was alive,” Ekhart said. “Besides, it wasn’t a healthy tree back in 1985 when I was here, a fact people fail to talk about. It was semi-dead from the interior.” That was the first time we’d heard the Golden Spruce wasn’t well. Ekhart believes Grant is dead.

But viewpoints differ, even among the police. As John Vaillant writes in The New Yorker, “Constable Walkinshaw believes that Hadwin could be alive: “The whole cop in me is saying there’s something too neat about this.” Constable Jeffrey, who has retired, thinks Hadwin drowned; Margaret Hadwin is trying to have her husband declared dead. But Corporal Stroeder isn’t so sure. “If a coroner asked me to justify that he was dead, I wouldn’t be able to,” he told me, when we met in Prince Rupert. “There are too many loose ends.” 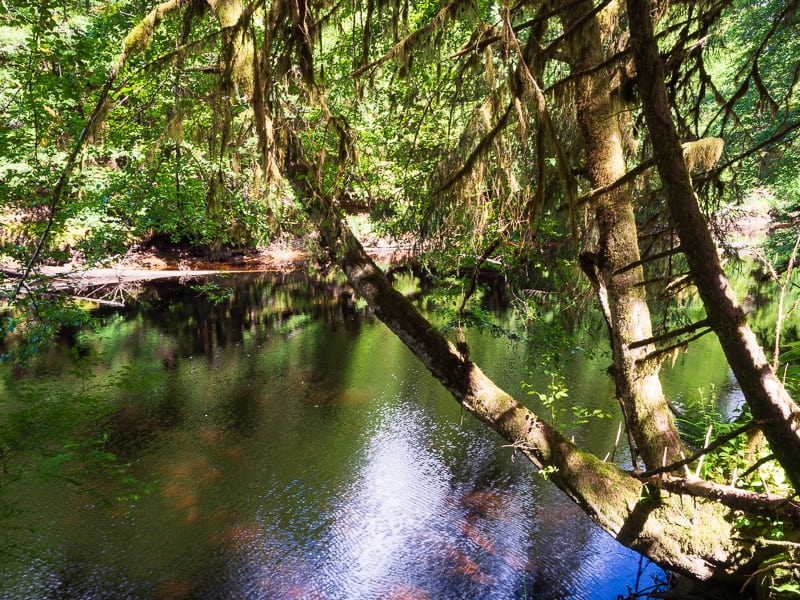 Reflecting on the mystery, myth and madness of this story

Did Grant even try to cross Hecate Strait? People had warned us how awful the five-hour crossing could be—on a ferry. Hecate Strait has a Venturi effect. Winds funnel cold air from the mountains causing thirty metre waves that collide with seven metre tides from Alaskan southerlies. I asked Jennifer Cates, first mate on Ocean Light II, if her boyfriend Gord Pincock, an experienced kayaker who makes his living guiding trips in Haida Gwaii, had crossed Hecate. “I don’t think he’d ever attempt it in a kayak,” she said.

Magellan insists Grant is dead. “There’s no way a guy like Grant would leave his axe behind,” he says. That stumped the RCMP too. One theory is that Grant went back to his kayak for the food he’d purchased and drowned trying to retrieve it. He always called his children on their birthdays and apparently that hasn’t happened since his disappearance. But how could his equipment still appear brand new after he kayaked 100 kilometres? And what about this—before leaving, he told his only confidante, a woman named Cora Gray, that if he had to choose a place to live, it would be Russia…

What do you think?

Wake, Hal. “Greed, Betrayal and the Murder of the Golden Spruce.” The Tyee. August 3, 2005. An interview in two parts with John Vaillant.

The Youngest Watchwoman on Haida Gwaii

The Pebble: A Love Story