In the Roman province of Lusitania

What fascinated us about the Roman city of ConÍmbriga in Portugal were the intricate mosaics, uncovered and open to the sky— still intact after 2,000 years! Think of it. How will our living room floors look in 4019? Especially if we left them roofless and open to the elements for centuries?

ConÍmbriga is Portugal’s largest and most impressive Roman site. It’s a perfect stop in the countryside when you’re leaving Lisbon and headed north to Coimbra, as we were.

Of course the Romans weren’t the first to enjoy this blithe air when they arrived in 139 BC. The peaceful Conii tribe had a thriving settlement but they were easily convinced that the Romans offered a preferable lifestyle.

ConÍmbriga began its glory days under Emperor Augustus who erected public buildings, like the forum, shops, baths and an amphitheatre. And brought water via the Augustan Aqueduct from Alcabideque, almost four kilometres away. A network of stone-heating ducts and drains was laid beneath those lovely mosaics for thermal spas and 500 fountains. What’s not to like about these creature comforts?

The House of Cantaber was the largest private villa, occupying an entire block 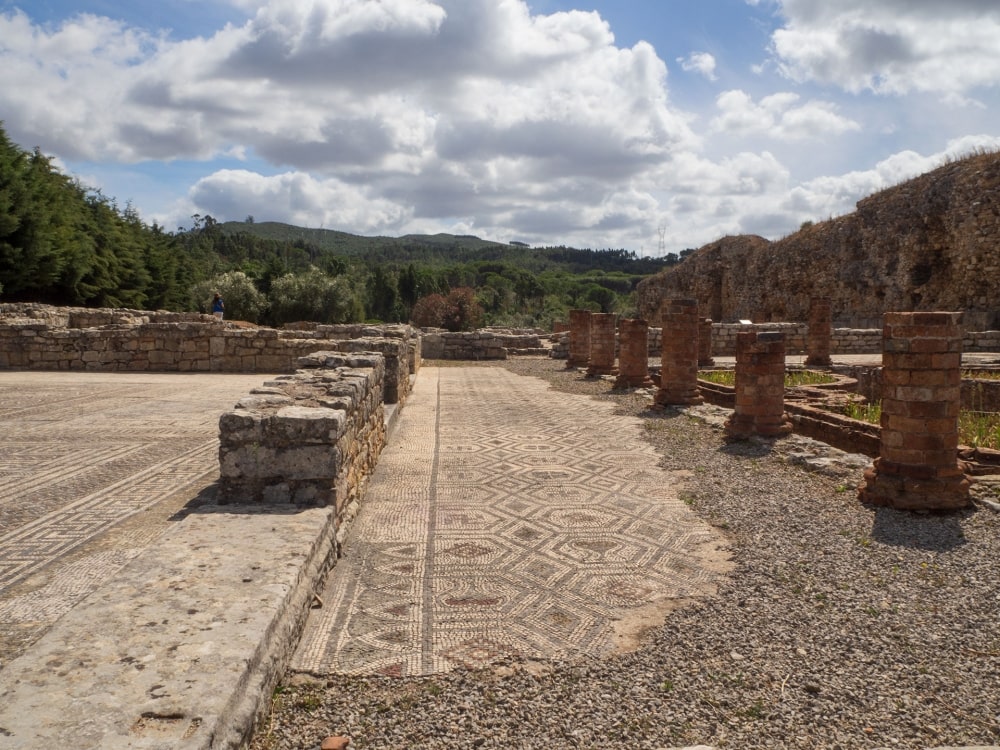 Set in a lush valley

Intricacy beneath every footstep

The fashionable move to black and white

Less than 20% of the historical city has been excavated 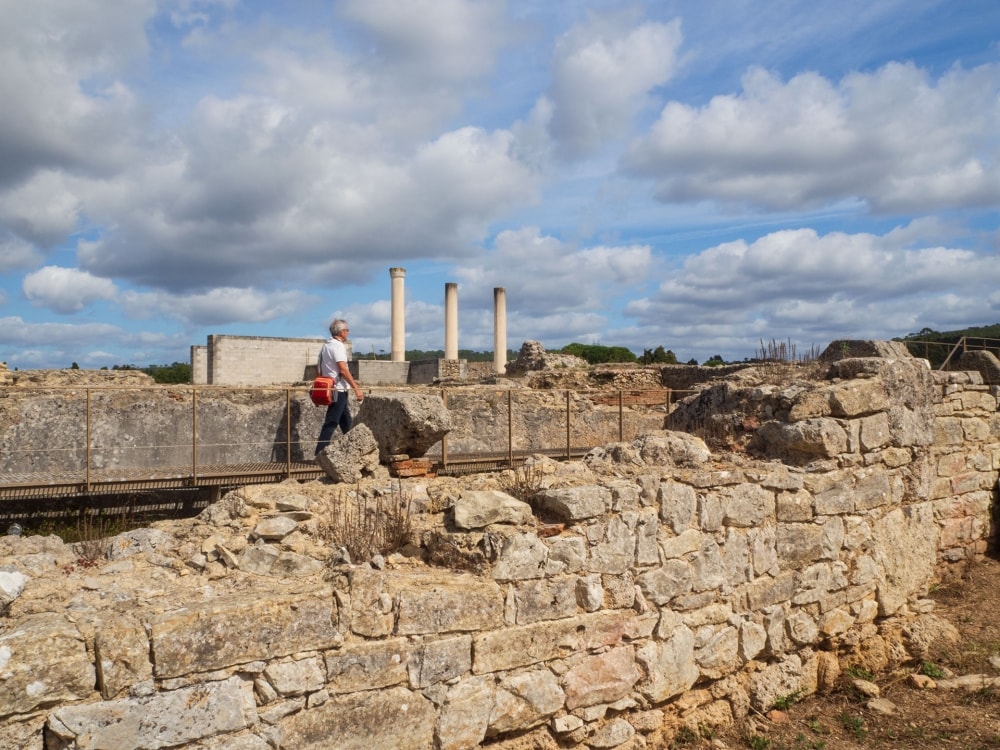 Rebuilt portico of the forum square, esplanade of the temple and cryptoportico

In the 5th century, houses were torn down and used to build a wall for protection

Under Flavius in the 1st century AD, the imperial forum was reconstructed and the Vitruvian baths were built. In ConÍmbriga’s final stage, buildings were remodelled and homes were insulae (built with more than one floor) with open courtyards. Mosaics, sculptures and painted murals decorated public buildings and private homes. Prosperity reigned and the population grew upwards of 10,000 people.

The most iconic mosaics are in the Casa dos Repuxos, (House of Fountains), the large aristocratic residence built in the first half of the 2nd century AD. Emulating Rome’s imperial residence, the figurative mosaics of this noble villa illustrate mythological stories to signify the owner’s learned status and hunting scenes indicating his sponsorship of public games. Imagine walking on these mosaics, listening to gurgling water fountains in air perfumed by flower gardens.

Mosaics cover 569 square metres in the House of Fountains

The goblet, symbol of wine and merriment

Fragments of the frescoed walls

A carpet of mosaics

A few sections are now somewhat covered from the elements

One of the largest homes, not just in ConÍmbriga but in the entire Roman world, was built in the 3rd century AD, the House of Cantaber.

Then there’s the Casa da Cruz Suástica, (House of swastika), named for the motif the Romans considered good luck that decorates two of its mosaics and Casa dos Esqueletos, (House of the skeletons), named for the necropolis, which came later to this location.

Are you thinking what we were: how did these mosaics remain so well preserved?

The Romans used tesserae, cubes of stone, ceramic, or glass that are, obviously, resistant to fading. They imported stones with unusual colours for special highlights and relied on glass for bright colors like blue and green. However, in the 1st century AD, black-and-white mosaics were fashionable, as we could see at ConÍmbriga. Attacked and pillaged by the Suebii, and later the Swabian-Visigoths, ConÍmbriga went into a slow decline and was abandoned by the 5th century. Not so good for the ConÍmbrigans, very  good for the mosaics. These decorative floors lay undisturbed for centuries, protected by layers of “sunscreen”—soil and vegetation.

Canada was only six years old when the Portuguese first began excavating ConÍmbriga and the site opened to the public the year Richard Bennett was elected prime minister. Placed in this landscape, the raw beauty of ConÍmbriga places you in the time of the Romans. Even two years later, at home, the world telescoped to the here and now, ConÍmbriga leaves a lasting imprint, an ut signaculum super cor tuum I think the Romans would call it.

“Each of Us is Many”
6 replies

Only Thirty Years and Eleven Months to Go