Let's see if we can dig out this beach ball

We were ready for a drowsy day, for Moeraki. The previous day we woke up before the sun in Auckland, drove slowly to the airport (because a tire on our rental car had blown out on the freeway and we were now poking along with a dinky spare), almost missed the flight to Christchurch because of limited service to the airport from the car rental company’s remote location, spent two hours learning about Kohanga (the motorhome we were renting) and then stocking her with supplies, drove three hours to a campsite and then maneuvered Kohanga down a darkened detour road for a renowned seafood dinner at Fleur’s (and back). Whew!

We were ready for the easy thirty-minute stroll from our campsite down Koekohe Beach to the famous Moeraki Boulders—nature’s biggest beach balls. One of the most unusual beach formations in the world.

And why are the Moeraki Boulders famous you ask?

Let’s start with their Brobdingnagian size. Only Jonathan Swift’s giants could play beach ball with these spherical stones, some with diameters exceeding three metres and colossal weights scaling up to 20 tonnes.

Respect for elders is another reason the Moeraki (pronounced Moe-racky) Boulders attract worldwide beach walkers and geologists. These beach balls, dating back to the Paleocene epoch, are celebrating their 56th– to-65th-millionth birthdays.

How did nature create these spherical wonders we wondered? We were too busy living in the moment on the Otago coast to find out much until we got home.

Bear with us for a little science. The Moeraki Boulders are called concretions. They started life by forming around a nucleus of a shell, plant or bone in the marine mud of the Paleocene sea floor. Layers of sediment became a hard solid mass because of calcite, a natural cement.

Nature took her time at the beach ball factory.

With marine mud settling on top of the balls and complicating her task, it took her almost five million years to form the largest boulders.

Dolomite and quartz crystallized in the septaria

You can see the weakness of the interiors of the balls, which don't have as much calcite cementing as the exteriors

Reclining Figure designed by the team of winds and waves

Looks a bit like a turtle shell doesn't it? 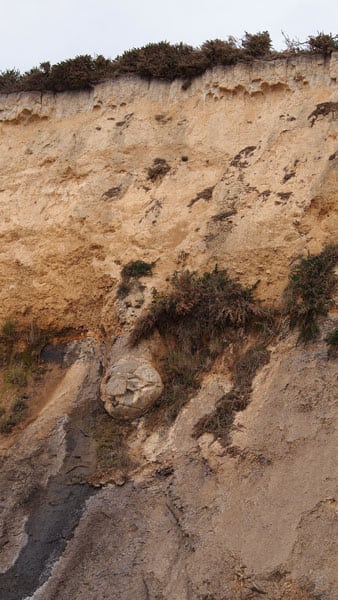 You can see how soft the mudstone is on the coastal cliff and counting the holes, see how many beach balls that have fallen

This beach ball has almost no visible septaria

For a good throw, he needs to back up a little don't you think?

The beach balls became buried deeply in the sediment. In recent geologic time, wind and waves eroded the softer mudstone in the coastal cliffs, causing the compacted beach balls to fall onto Koekohe Beach. Watch out!

The Moeraki Boulders remind me of beach balls (rather than dinosaur eggs or marbles or eel baskets) because their cracked veins resemble the stitching on beach balls.

A  little Latin with your science explains this. In geological terms, those cracked veins are called septaria (Latin: septum = partition) because they partition the boulders into distinct segments radiating from the core.

The insides of the beach balls are not as well cemented as the exteriors, so they weather more easily, exposing the geometric veins.

The crystallization effect in the septaria (which is quite beautiful) comes from small amounts of dolomite and quartz deposited by groundwater that flowed through the mudstone during periods when the sea level fell.

Playful is how I’d describe Moeraki Boulders. Sure, you can’t bounce these balls on the beach. But imagining a toss awakens a childish lightness. “Let’s see if we can roll this little one…”

Invigorated, by noon we had explored the Moeraki beach balls and returned to our campsite. Kohanga was restless. She interpreted Moeraki to mean “half a drowsy day.” It was time to roll on down the road.

Here are three sites where we found info on Moeraki Boulders: one, two, three.

Kohanga liked her first camp spot with us at Moeraki Boulders Kiwi Holiday Park, which was at the top end of Koekohe Beach, the start of the beach walk to see the Moeraki  beach-ball boulders.

Never Doubtful it would be a Good Time

The White House of Reading
Scroll to top