It was early evening by the time we arrived, our hopes of getting a campsite diminished given that Natural Bridges Campground is highly desirable and has only thirteen spots. “Campground Full,” the sign read.

“Let’s drive in and see if there’s a space,” I said. “This is the nicest campground for miles. And we want to be near the trailhead for tomorrow.”

“That’ll be a waste of time,” Magellan said. “But we might as well, given how far we’ve driven to get here.”

And wouldn’t you know it? Campsite eight, small and a cactus-spike length from the neighbours on both sides, was free.

We’d driven for more than eight hours, beginning on red-sand back roads to a hiking trailhead, then on to Hanksville, whose only store we eschewed thinking we’d find something better down the road. At Hite, the only store was closed—turns out it’s just a pay-at-the-pump gas station with no supplies or local info. Closed also was the ranger station at Natural Bridges Monument Park. “It’s hard to imagine you could go so far in the U.S. and find no services,” Magellan said. “We have enough water and food and propane. But we’re low on ice. And we’re out of beer and wine.”

In campsite seven was a happy family, dad strumming John’s Denver’s “Country Road” on his guitar, a joyous daughter repeatedly announcing, “I found the BIGGEST cactus,” to anyone who would listen. A much different demeanor flowed from site nine on the other side of us. It was occupied by a couple we named Moses, tall and sinuous, glowering at us as above his long grey beard, his voice bitter as brine dripping from a dill pickle, his disposition prickly as a cactus, and Ruth, the tensility of her every move calculated so as not to offend. “Travellin’ in style. That’s a Land Rover,” I overheard him scoff to Ruth, even though their fifth-wheel rig was likely twice the value of our Rove-Inn.

A stir-fry is my go-to dinner when our camping supplies are low. As I was slicing well-aged beef, onions, week-old rapini and yellow peppers, I could hear Moses grumbling about their plans for the next day, his irascibility countered by carefully measured words from Ruth. They seemed “…helpless as two bridges that go over the same river side by side but are separated from each other by an abyss.” I turned my thoughts toward our plans for hiking the Three Bridges.

From Kathy and Craig’s excellent guidebook

Searching for gold, in 1883 a prospector named Cass Hite (was the town of Hite named after him?) had wandered up a tributary of the Colorado River where instead of precious metal, he found three natural bridges. National Geographic Magazine publicized his find in 1904 and four years later Natural Bridges National Monument became Utah’s first National Park Service area. Yet until the 1950s, the only way to get here was on horseback—a three-day ride. Why were we complaining about a long drive!

Long before Cass, prehistoric families lived alongside these natural bridges for 9,000 years. The Ancestral Puebloans arrived in 1060, probably from Mesa Verde given the similarities of their homes and artistry, before suddenly leaving everything behind and migrating south in 1285. Later, Navajos and Paiutes lived here.

The formation of these natural bridges, which are geologically young and quite rare, is fascinating. Ten million years ago the Colorado Plateau was flat. Boulder-laden floodwaters caused it to rise, depositing crystalline quartz that solidified into deep walls of pure white Cedar Mesa Sandstone—hence the name White Canyon. Watercourses carved down into the sandstone, undercutting canyon walls, slicing through the rock of least resistance, bending back upon themselves and leaving fins of stone at the necks of their meandering. Flash floods cut through these narrow necks to create three natural bridges. They are far from rock-solid. (Is anything?) Over time, erosion and hydraulic action have enlarged their apertures, making the bridges more delicate, more precarious.

Things were still delicate next door when we sat down to dinner to the sound of Moses axing wood. “He could split that wood with his nose,” Magellan whispered. “And light a fire with his rage,” I murmured.

The next morning I was stirring granola into yogurt for breakfast when a torrential fight of words broke out next door. I strained to listen, but all I heard was Ruth saying,  “I’m afraid to bring it up.” A few minutes later, Moses stormed off down the road.

Not long after, Ruth came over to our table. A lovely woman, atoning for his performance and the undercurrent of her discontent with a bridge of benign conversation.

For many reasons, we wanted to get an early start on the Three Bridges hike. By eight-thirty we were climbing down a steel stairway lined with guardrails and two ladders to a grand viewpoint of Sipapu  before the last descent to the underbelly of this first and most dramatic of the bridges. The air was fresh and cool, April green, so lush mosquitoes were our hiking companions.

Always there are signs

Sipapu in Hopi means the place of emergence

We followed the remote canyon in the footsteps of a hiker we named Big Foot who must have started much earlier as we never saw him. In almost six hours of hiking, we saw only one other couple in the canyon.

About 70 metres long, Kachina is the world’s third-largest natural bridge

Watch for quick sand near the streams

Four thousand tons of rock fell from this bridge in 1992

Nearby is Horse Collar Ruin with dwellings, granaries and petroglyphs

Shared solitude describes our hiking days. Mostly, we’re silent, marvelling at the natural world, absorbing the beauty around us, alive to the present. I felt very lucky that day.

Owachomo is the world’s thinnest natural bridge (2.7 metres thick over a 35 metre span)

Owachomo is 50,000-60,000 years old. It’s said that Owachomo, whose sinuous span has eroded more quickly than the others, could come crashing down at any moment.

Wild Mustard—watch for its latent heat 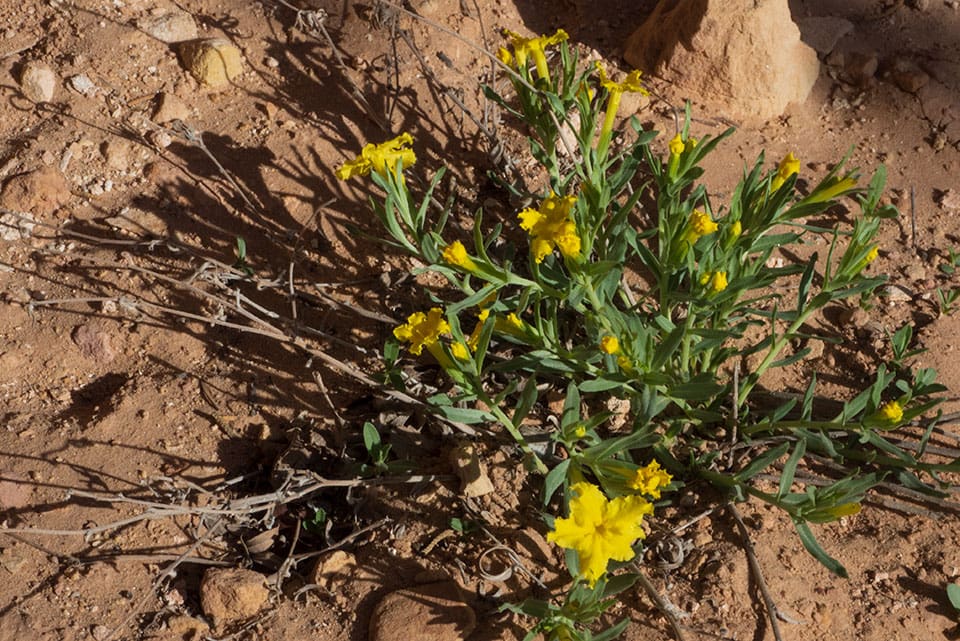 When we got back to Rove-Inn, Moses and Ruth were gone.

Copeland, Kathy & Craig. Hiking from here to WOW UTAH CANYON COUNTRY. Birmingham, Alabama: Wilderness Press, 2015. Written by a happily married couple, this is the only guidebook you need for hiking in Utah.

The quote “…helpless as two bridges that go over the same river side by side but are separated from each other by an abyss” is from a letter the famous writer/poet Rainer Maria Rilke wrote in a letter to his wife. Serendipitously, I read it last week in the introduction to Later Novels and Stories by William Maxwell.

Natural Bridges Campground gets a 4.9 rating.

Will You Stand Up For Me?
5 replies

Why are you going?