Donkeys, sure-footed and unspooked, are still used in Oman's canyons

“When you see a parade of mules coming, move off the trail,” our guide Brian told our hiking group last spring in the Grand Canyon.

“Why do you use mules instead of horses?” someone asked.

“Mules can carry a lot more weight for one thing. They’re also more sure-footed than horses. It’s the way they walk. And mules don’t spook. Remember the horse jumping off the cliff in The Revenant? A mule would never do that.”

Turning to Magellan, I said, “Remember our hike in Oman’s Grand Canyon to that abandoned village? They used donkeys to carry up supplies.”

“How could I forget?” he said. “It’s the only place I’ve ever had vertigo.”

Vertigo indeed. The canyon walls of An Nakhur twist around, close in, soar above and drop off—way off. One. Kilometre. Down.

The country’s most famous hike is called The Balcony Walk for a reason. You feel like you’re walking on a balcony. An ancient balcony. A skinny balcony with almost-vertical sides. A crumbly balcony perched above vertiginous drop-offs. A sedimentary balcony dropping sharply into the understory of a canyon so barren you can see the zigzag steps of jagged rocks all the way down to the bottom where you would land if you tumbled off the balcony.

A blue velvet sky in the "Sun Mountains"

A barren canyon, except for the Spina Christi, whose spiny thorns will make you blasphemous

The trail is less rugged and easier than it appears

After the Grand Canyon, An Nakhur is the second deepest in the world. It’s in Oman’s Western Hajar Mountains, home of the country’s highest peak (3005 metres), Jebel Shams, Arabic for Mountain of the Sun.

Sunny it was when Magellan and I were there in early March, although it had snowed a few days before we arrived. We’d rented a Land Cruiser with a pop-up tent on the roof called, somewhat appropriately, Hannibal. The night before we hiked The Balcony Walk it was so cold and windy that we bedded up in Hannibal wearing long underwear, vests, socks, booties and, in my case, a woollen hat, and then covered our thin duvet with bath towels. But for hiking, the cloud-free skies and temperate spring weather were superb.

Getting out of bed in my Jebel Shams 'pyjamas'

To get to The Balcony Walk, Magellan drove the gravel road to Al Khitaym (1900 m), a hamlet of houses clinging to the canyon edge. A group of older women and men from the hamlet were sitting near the trailhead. “I’ll just be a minute. I want to look at the trinkets they’re selling,” I said, checking out the table of brightly coloured bracelets, rugs and key chains, all made from twisted wool.

Officially, the hike’s called W6 An Nakhr Balcony Abandoned Village Walk because it leads to the deserted village of As Sab, once the oasis home of 15 families.

Our Omani Trekking pamphlet noted that when As Sab was inhabited 40 years ago caravans of as many as 25 donkeys serviced the village with supplies and transportation. Donkeys—old-world beasts of burden in Oman’s grand canyon. Mules—new-world beasts of burden in Arizona’s Grand Canyon. It got me thinking this spring when we were in Arizona’s Grand Canyon: mules must have inherited their capability to keep themselves and their passengers away from danger from their mothers—donkeys.

“These people must have really feared their enemies to live way up here,” I said to Magellan as we the donkeyed along the dusty 3.5 kilometres to As Sab, carrying lots of water and snacks, stepping gingerly—and stopping when spooked. “Let’s just stop here for a minute,” Magellan said (uncharacteristically) several times. “I need to rest my eyes. Vertigo.”

“Do you think the oldies at the trailhead lived here before it was abandoned?” I asked Magellan as we wandered among the well-constructed stone houses at As Sab, a gentle zephyr unfurling the delicate leaves of desert-green acacias. We discovered the answer in our Oman Trekking pamphlet. “Don’t take anything from the houses, even if they appear unused or abandoned, as everything still belongs to the former inhabitants who now live in Wadi Ghul and Al Hamra.”

As Sab village was abandoned in the 1970s 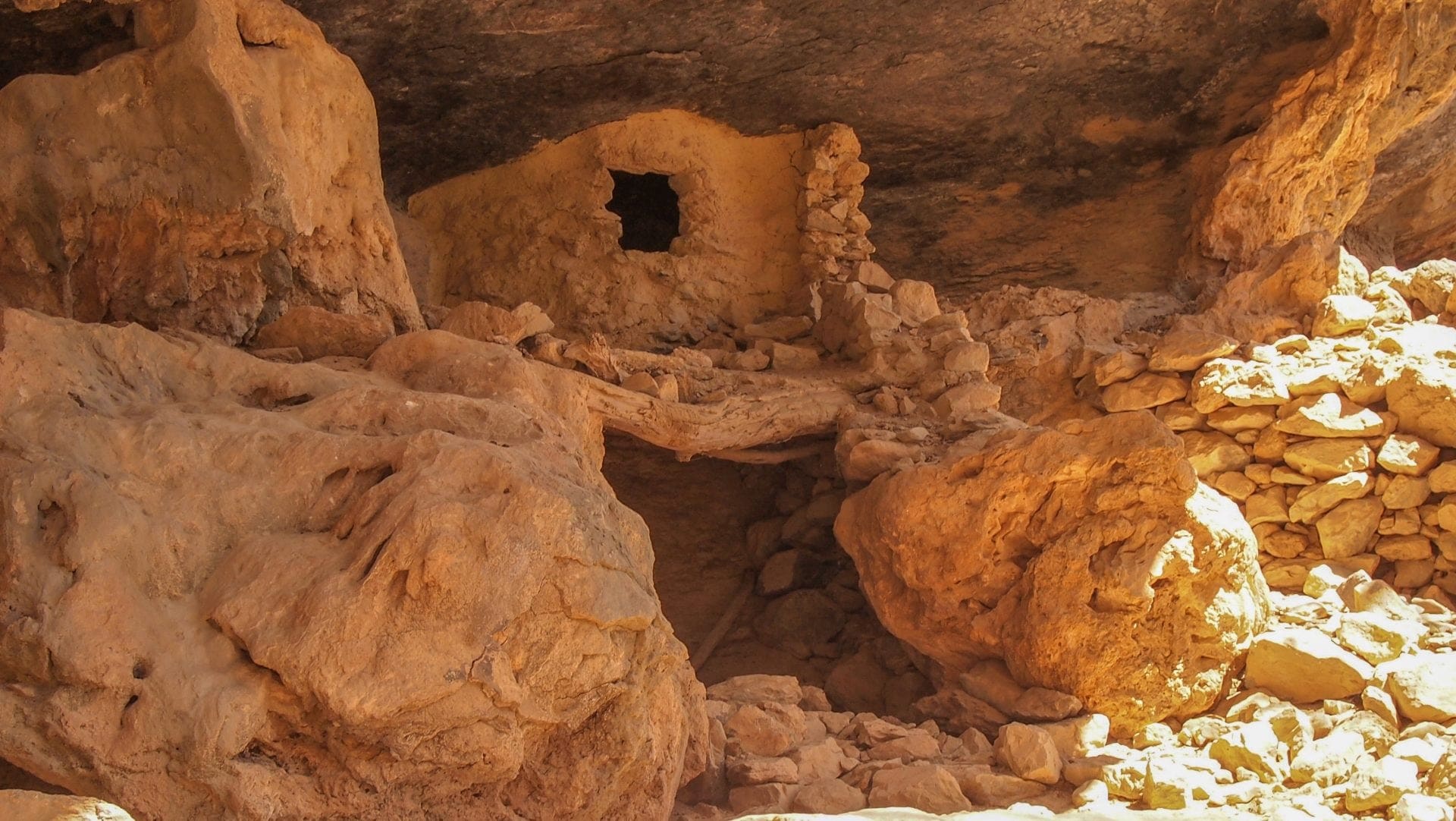 What are the stories of villagers' lives here at As Sab?

Crescent-moon shaped terraces were sculpted into the cliffs. As Sab’s families grew a wondrous variety of crops: wheat, olives, pomegranates, lemons, watermelons, onions, chili peppers, tomatoes and basil. Water was transported to the terraces via a falaj from a big pool beneath a nearby cave. They also raised livestock. Sheep, donkeys and goats.

Goats. They haven’t abandoned As Sab. In this spectacular natural amphitheater, the long-haired goats are natural performers, camera-ready. You don’t need to call “Take One;” they’re always ready to take one of your orange segments, water bottles, even my hat. (Or maybe they just like the colour orange?)

“What do you think are the differences between hiking the grand canyons in Oman and Arizona?” I asked Magellan while writing this blog.

“Oman’s grand canyon is a lot more peaceful and dramatic. How many other hikers did we see there—five? Compare that to Havasu Falls or worse yet, the South Rim with its dozens of busloads of people.”

But we  both agreed one should see all the grand canyons you can, even if you only look over the edge before getting back on the bus. There’s a quote I read recently from the Scottish-American naturalist John Muir. It could be a mantra for anyone, but it makes me feel like getting off my you-know-what to go on another trip: “The world’s big and I want to have a good look at it before it gets dark.” Yes. A world wth so many grands: canyons and cities, mountains and museums, festivals and food…

The Omanis call this structure an areesh

After The Balcony Walk we drove back to the Jabal Shams Campsite, to our own areesh: canopied, carpeted and cushioned, complete with cheese (goat of course), cucumbers, gin and tonics, the waft of Omani frankincense masking our sweat. One of many grand days.

Oman Trekking. Oman: Explorer Publishing, 2005. A valuable resource that’s not a book but a boxed set of four-page pamphlets printed on durable paper covering the 16 best treks in the country. The Balcony Hike, waymarked with striped bands of yellow, white and red paint, is rated Level 2 as there’s very little elevation gain or loss and it’s only 6 kilometres return. We purchased Oman Trekking at Wanderlust in Vancouver.

Another Reason we Love our Birth Province
Scroll to top