We were in Telegraph Creek, BC, the old town. Remote and in the wilderness. Requiring a 110 kilometre drive up a steep, gravel, mountain road with double-digit grades. Pulling up alongside a woman driving a van that had passed us on the road up, Magellan asked, “Is there anything here?” “Nah, this town is abandoned. Just a museum but it looks closed.”

After driving all that way, we decided to snoop around. Walking toward the museum I saw a guy sitting above us on his porch, almost invisible behind a porch screened with a row of antlers except for his cowboy hat, white beard and striped shirt but I didn’t say anything. A few minutes later as we stood at the museum door, he walked up behind us. “Can I help you?” he asked.

This is not the Louvre.

Remove three letters—this museum is about Love. Mickey Ferguson made his father-in-law’s dream come true. “He collected all this stuff hoping one day to open a museum. But he died in 2011 before making it happen. I did it for him. Opened up just last year. It’s a family museum.”

Mickey’s father-in-law, Francis Gleason, was a heavy-duty mechanic, a jet boat operator on the Stikine River, a community-service worker with the Telegraph Creek RCMP and a proud elder of the Tahltan Nation. The museum is dedicated to both Mickey’s in-laws, Francis + Anne.

Inside you’ll find bygone treasures: leather saddles, flowered cups and saucers, chisels, obsidian from the nearby Mt. Edziza, typewriters, sewing machines, rifles, bucksaws, clocks, radios…and walls lined with black-and-white photographs, all the same size, all framed in what appears to be barnwood. 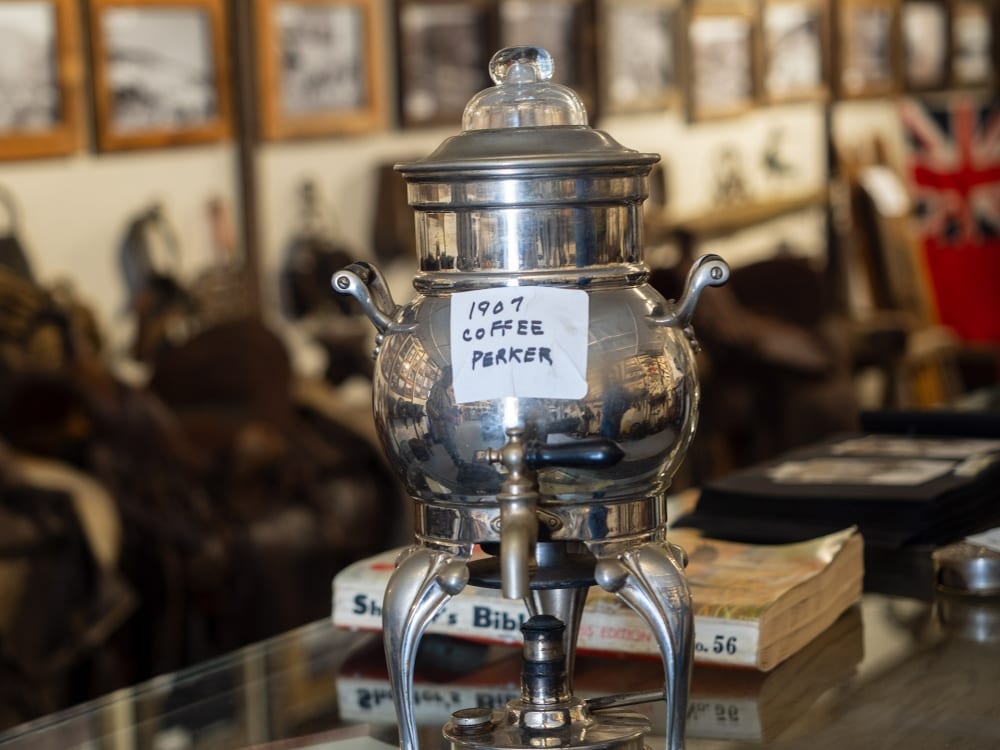 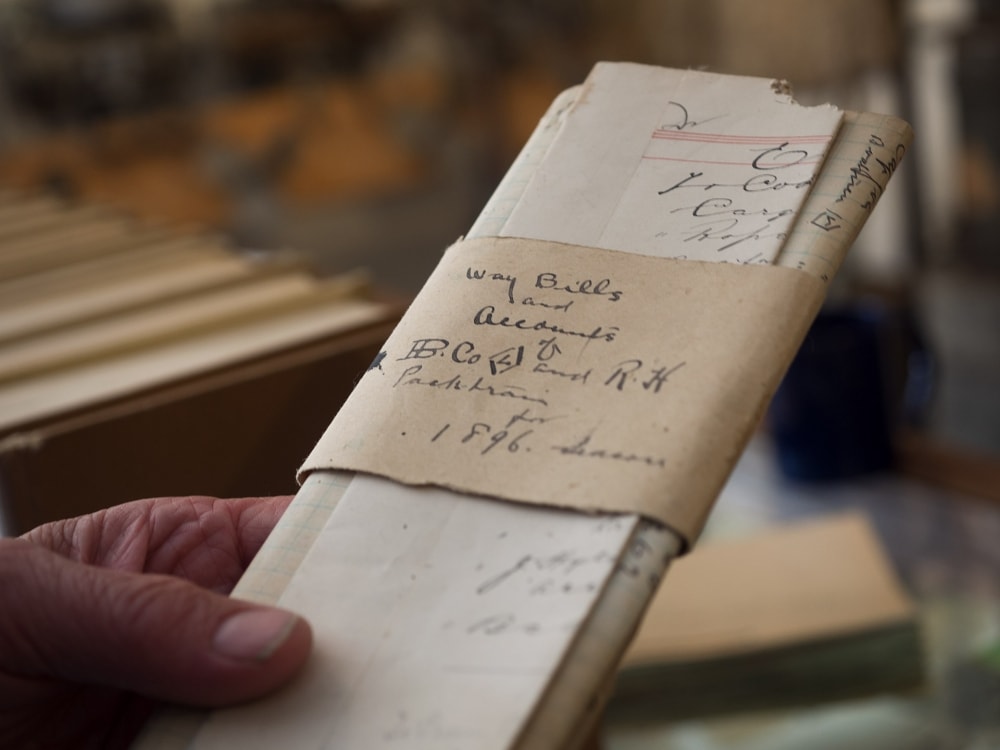 Penmanship with a flourish 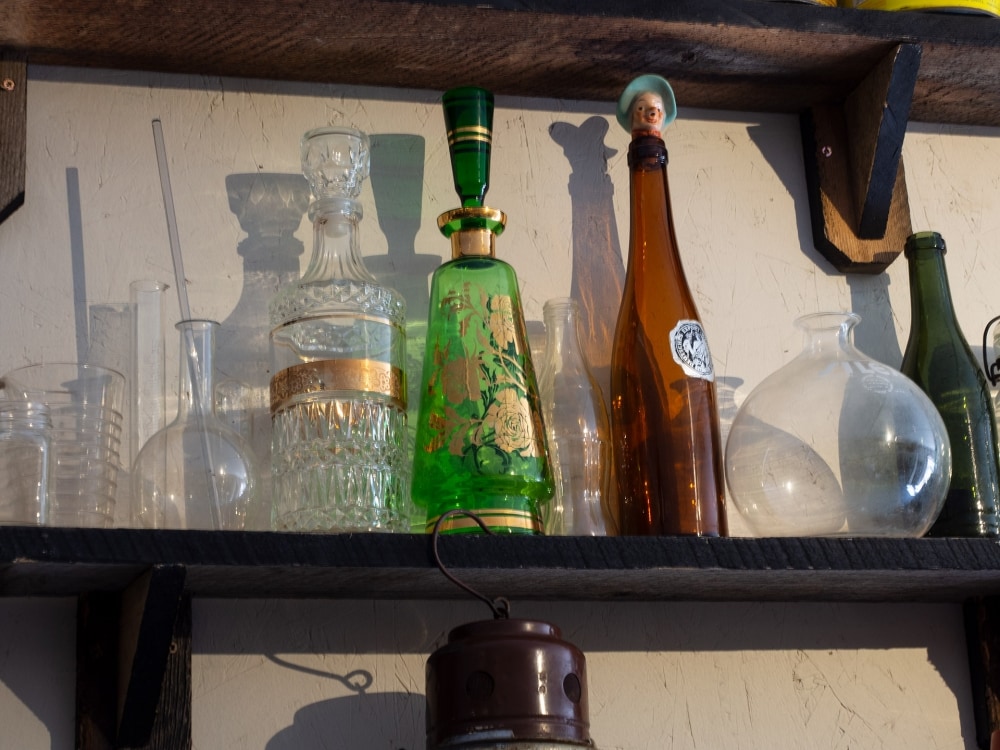 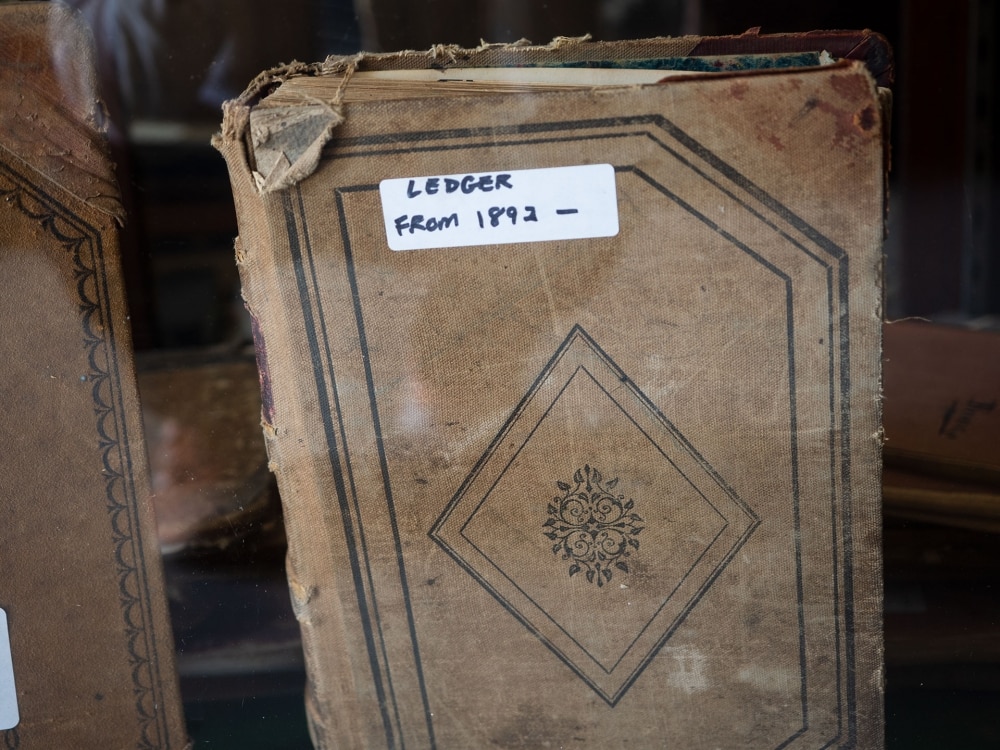 And Mickey himself, how did he land in Telegraph Creek?

“When the smaller sawmills in the Kootenays started shutting down, a buddy and I came up here to work as river rats,” Mickey explained. “We fell trees that were going to fall in  to get them off their roots and then blasted out the ones that got away on us in low water, spring and fall,” Mickey explains, actions that had been happening for years on the Stikine River (sometimes called “The Uncle of Rivers”) going back to the days of the sternwheelers navigating safely through turbulent waters. “Flattening the rapids was what we were after,” Mickey laughed. Telegraph Creek is the head of navigation on the Stikine River, declared a BC Heritage River. You can’t boat further upstream. Well, you can if you can master Class 5+ cataracts with vertical cliff walls stretching up to 300 metres and the river’s width narrowing to the width of your paddle. 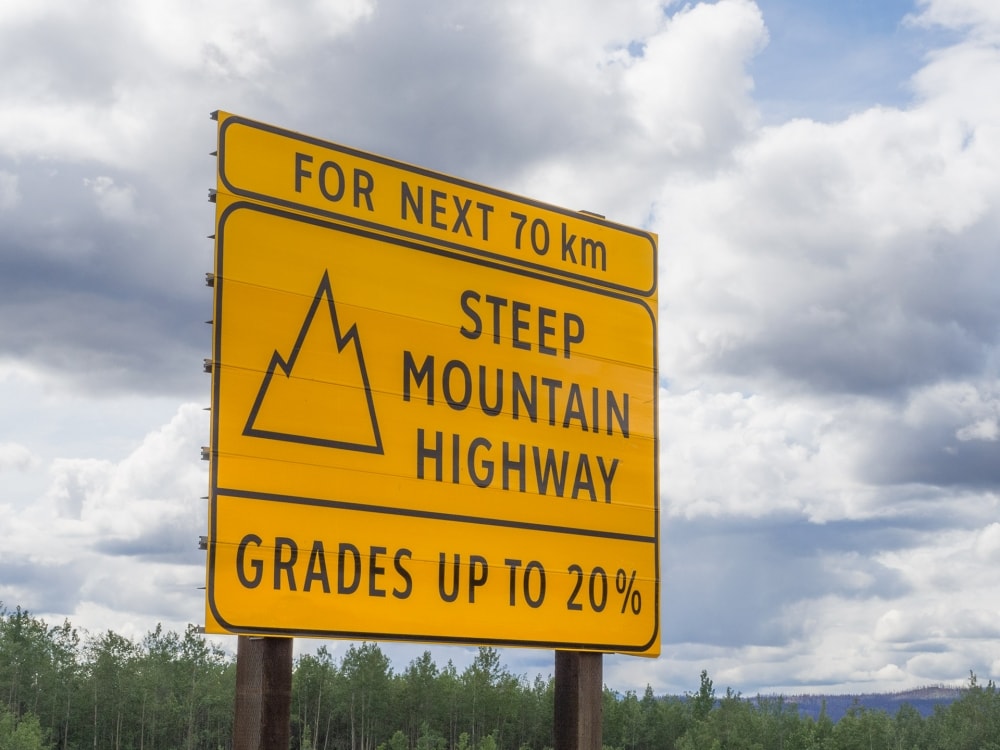 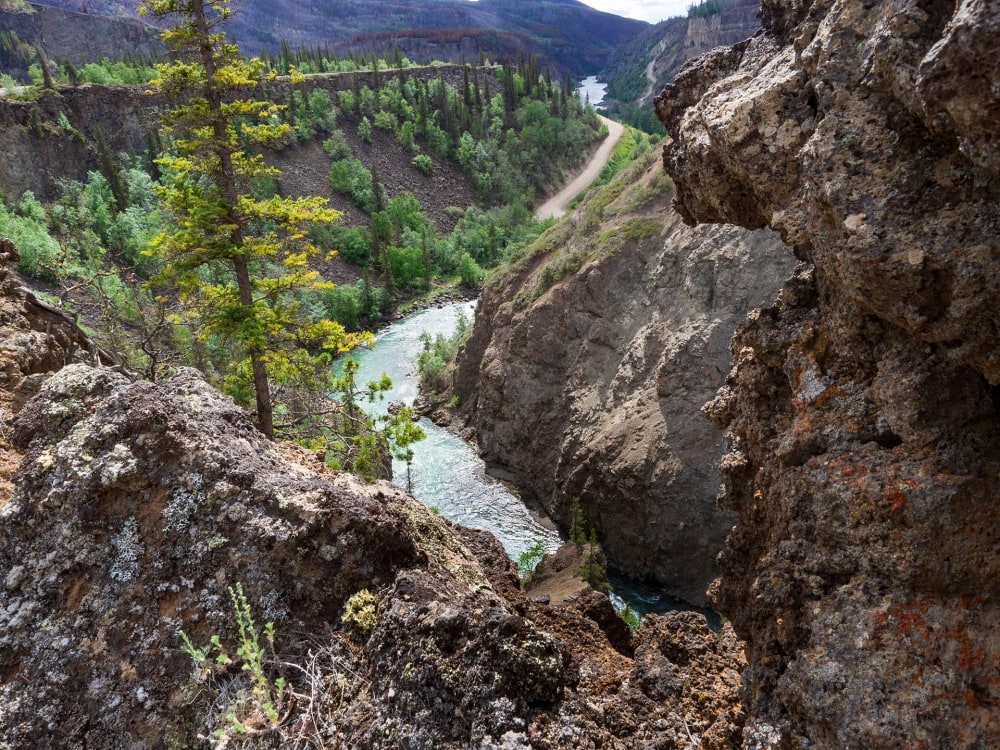 The 100 kilometre Stikine River gorge, confining its rage to between the cliffs

Mickey went online, mostly scouring the Royal BC Museum in Victoria for photographs of life in Telegraph Creek. “I probably looked at more than a 116,000 photographs,” he said. He and a friend digitized microfiche into 150 or so photographs.

“The post-processing and printing is excellent. What did you use?” Magellan asked.

“Just an Epson printer,” Mickey said, “and a lot of ink cartridges.”

He made all of the frames himself. 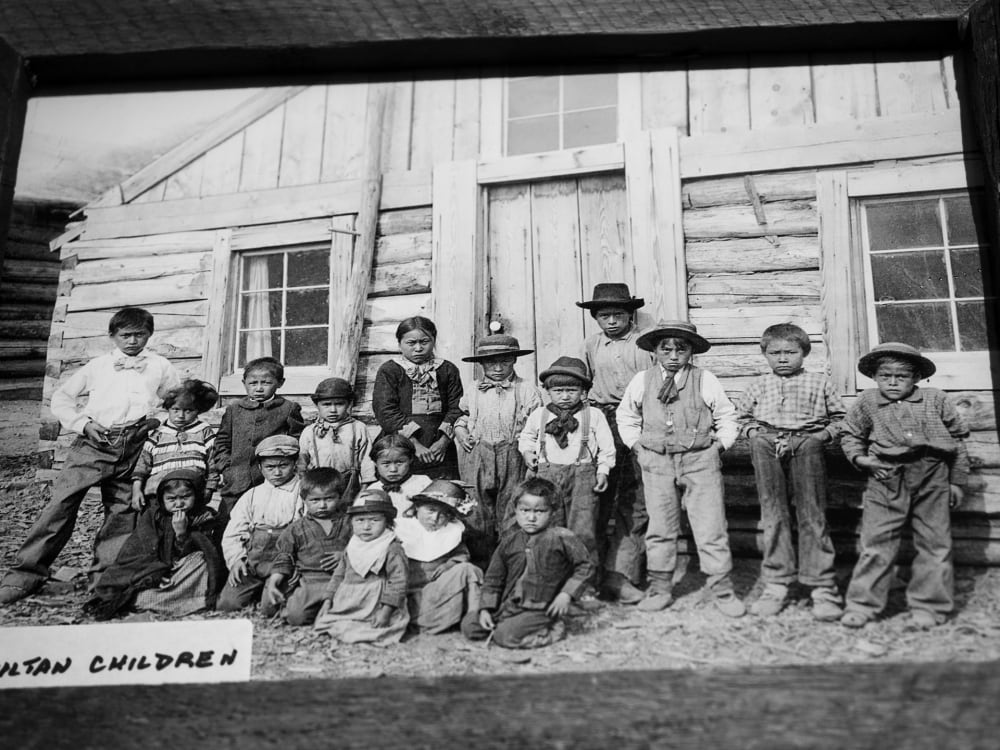 Not a happy day at school 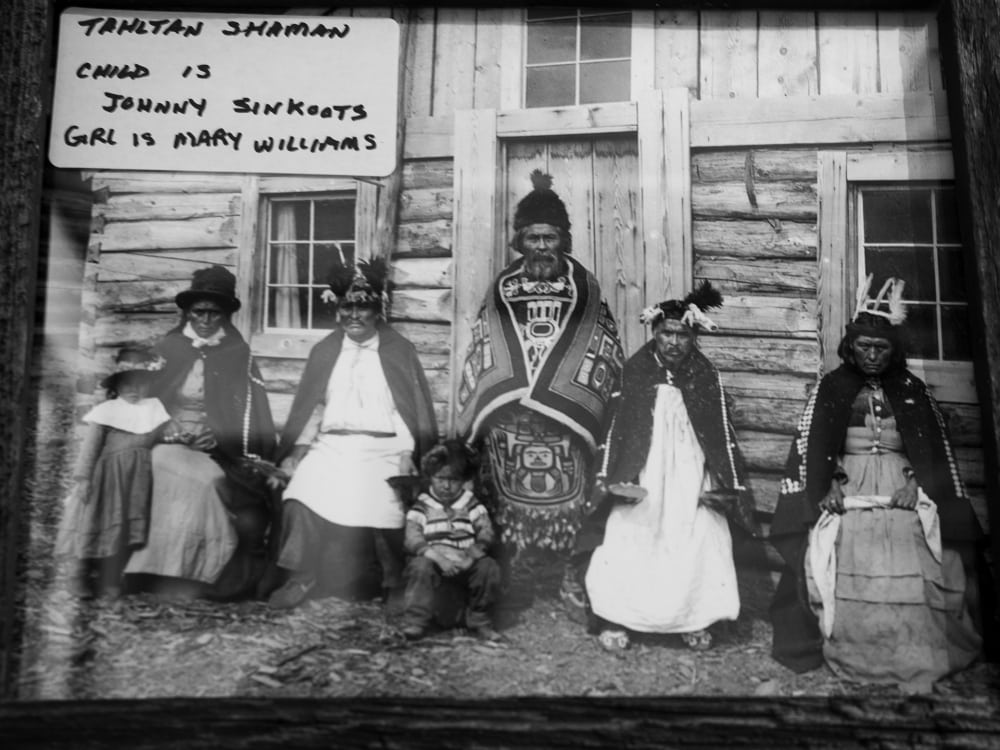 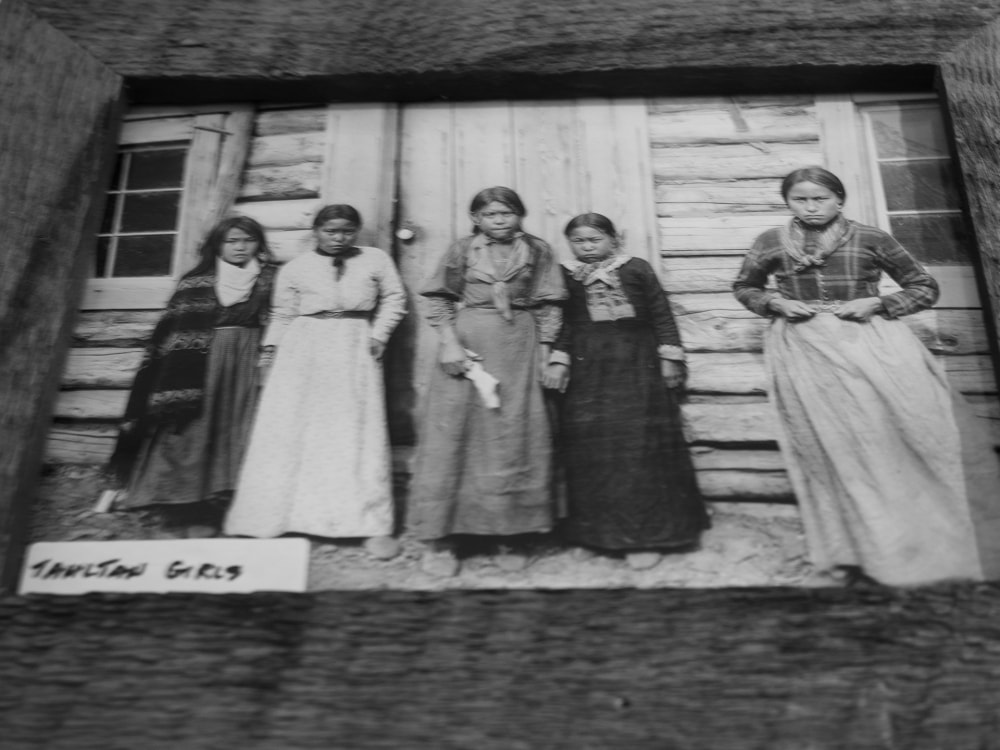 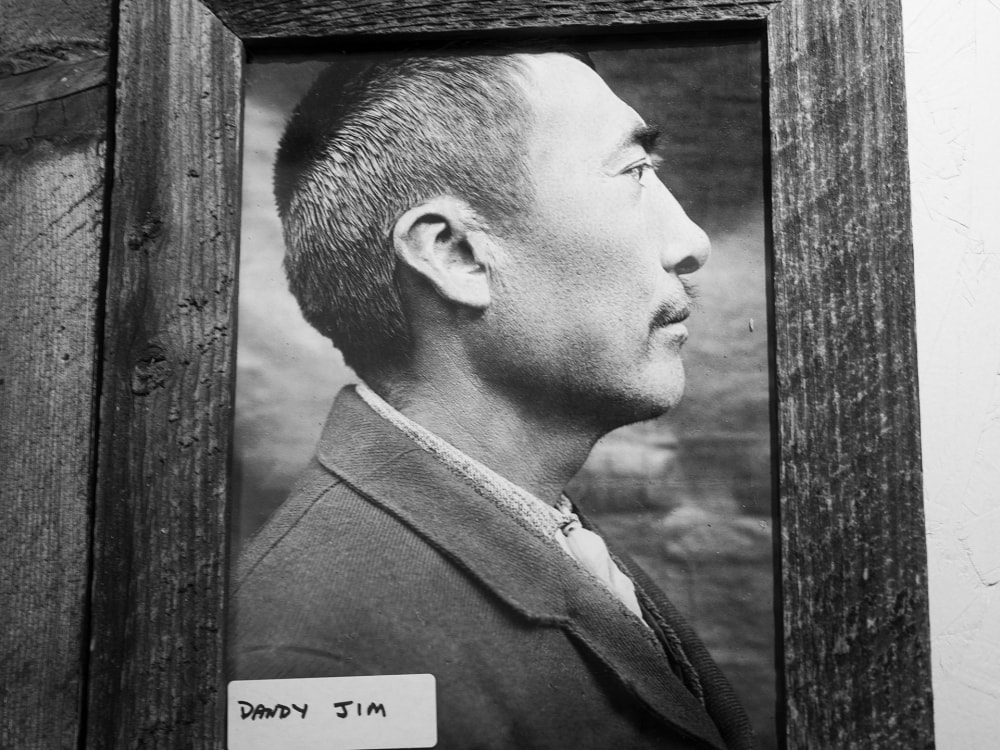 Dandy Jim, fluent in Tahltan,, Tlingit and English recorded songs and stories, like "The Blind Man and the Loon" 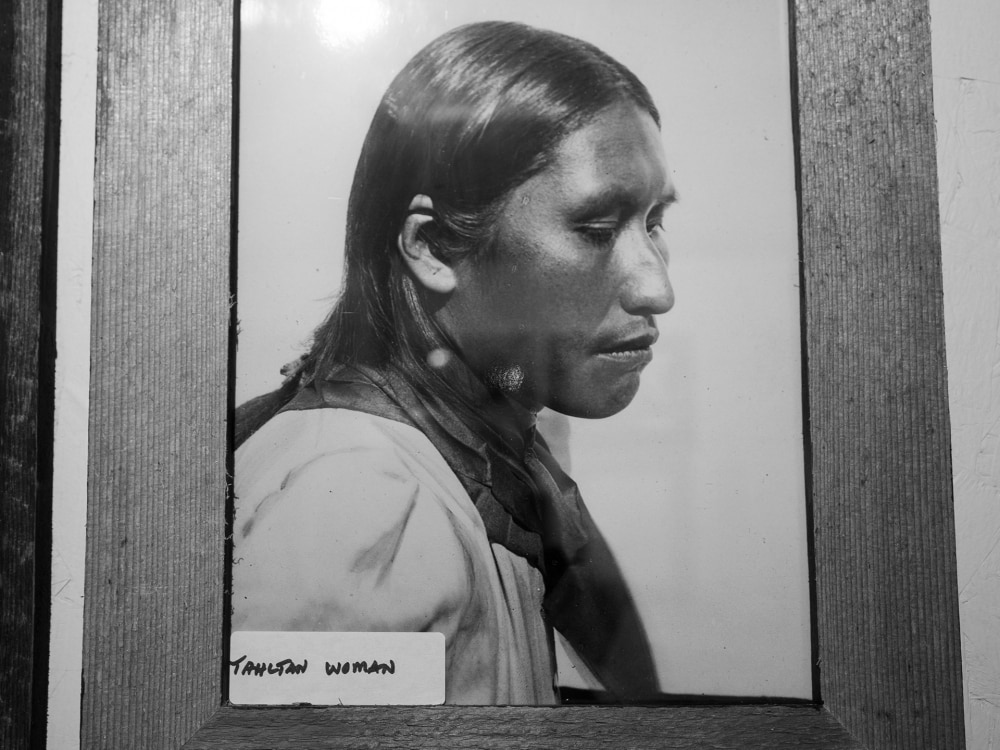 Quality in the photography and framing 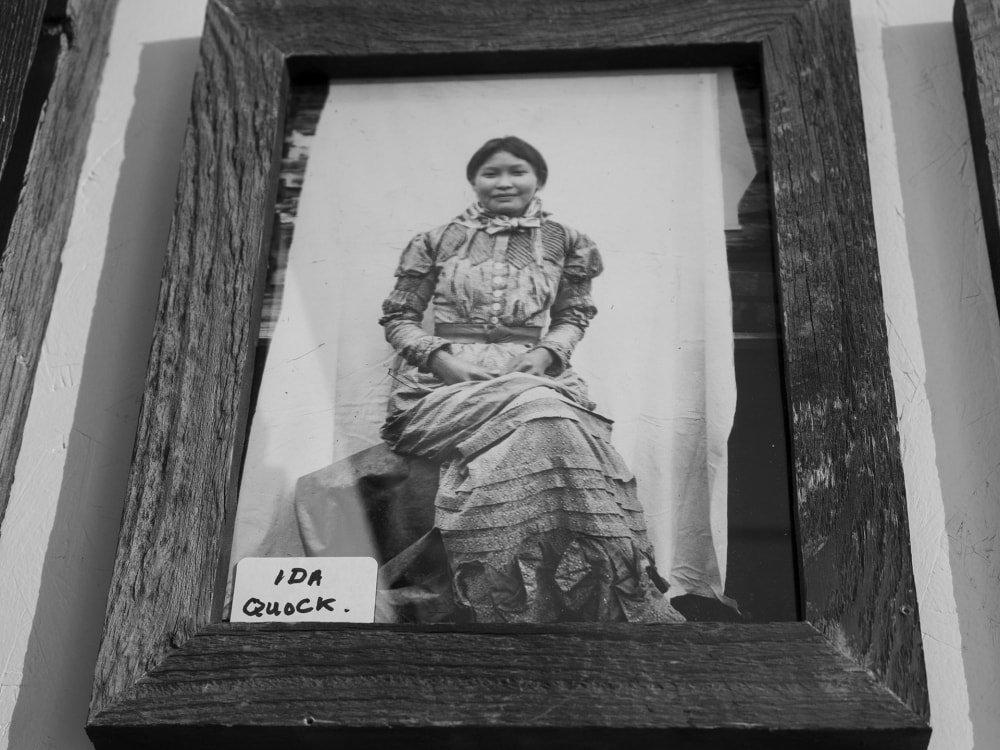 The Quock family is still active in "Upper Telegraph Creek" 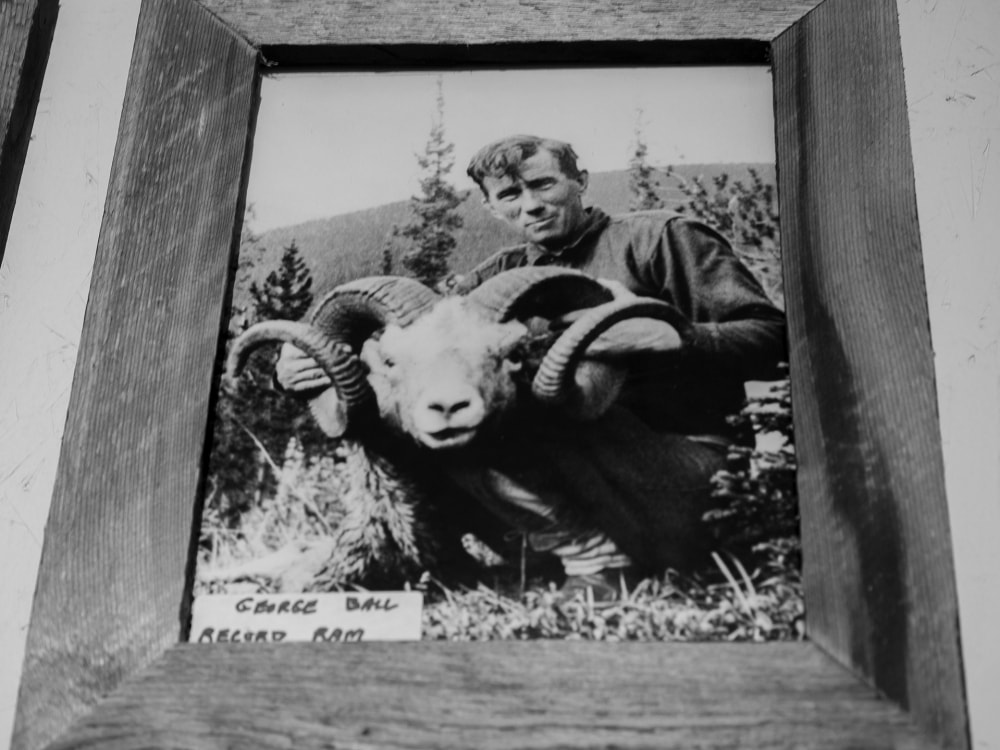 A famous hunter and owner of the Glenora Guest Ranch upriver 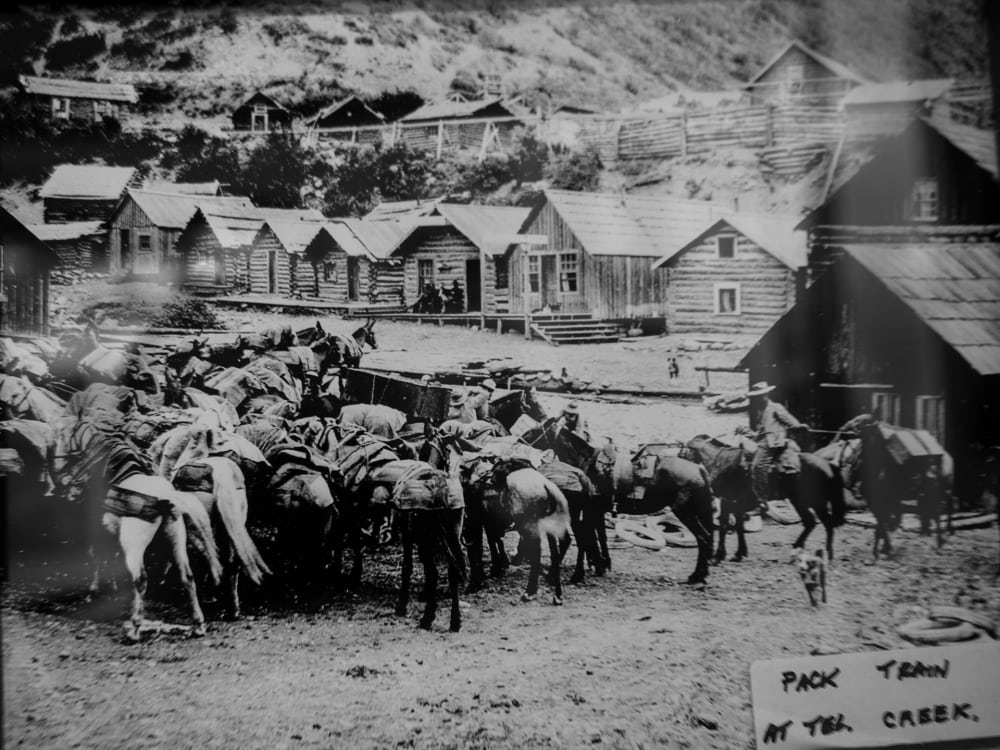 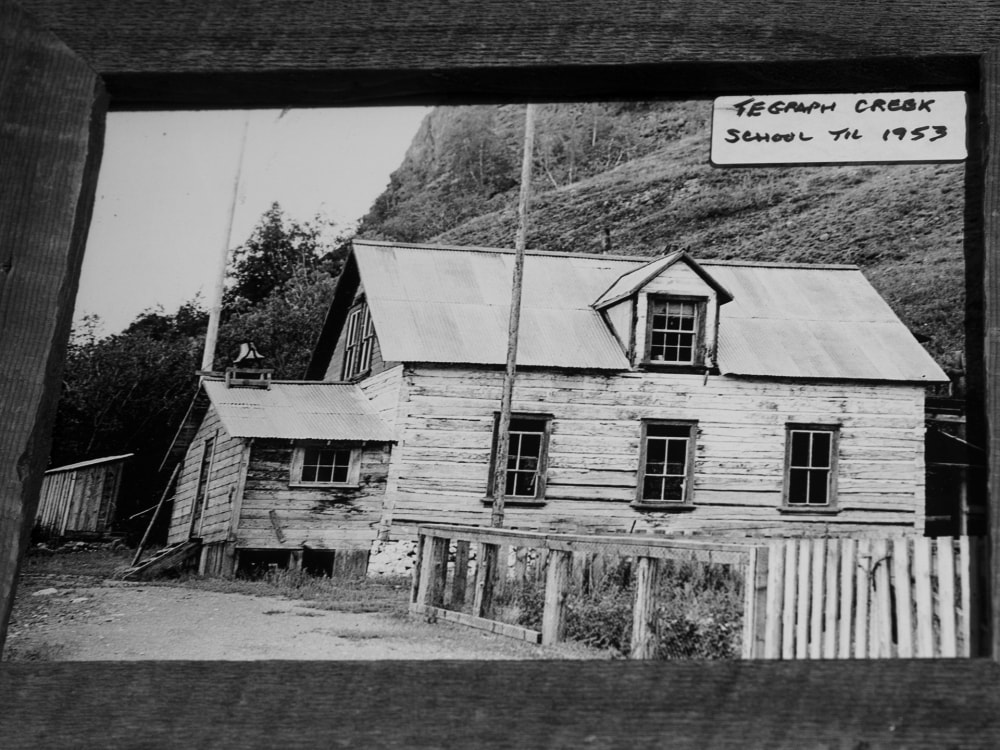 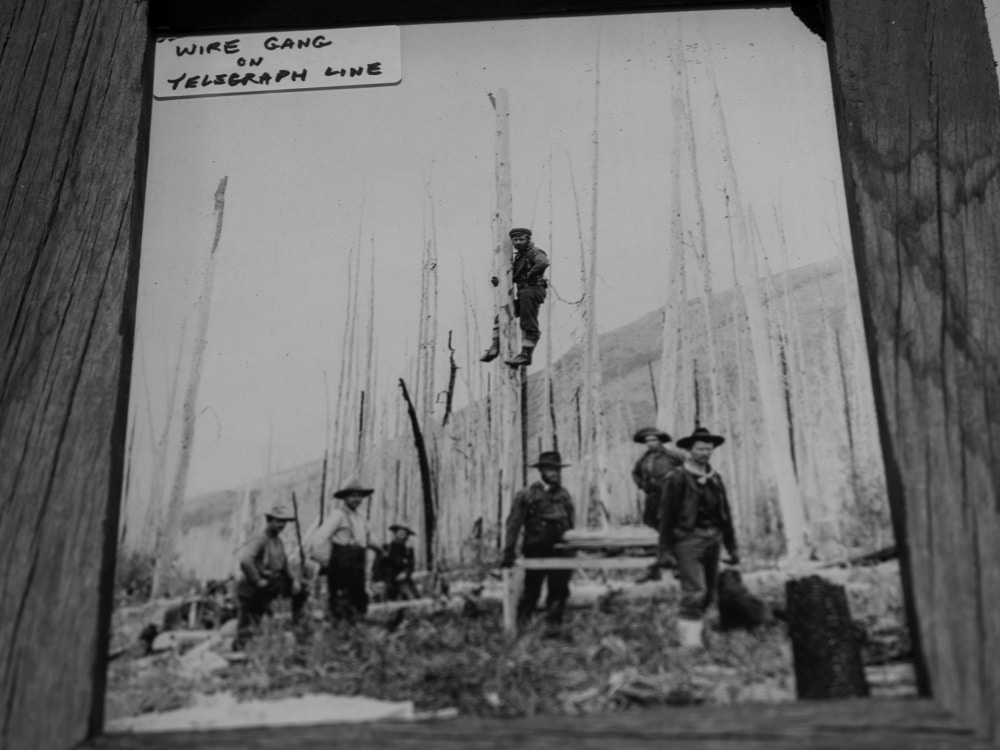 A Dominion Telegraph line was eventually established to Atlin BC and Dawson City, Yukon

Over the course of an hour or so, Mickey also shared some of the history of Telegraph Creek.

Russian, European and American fur traders arrived here at the end of the eighteenth century. “Hudson’s Bay ran boats up the river to their post at Glenora where they had a store and a hotel. Hyland’s had a store here and there was another one in the area. This museum is sitting on what used to be the Hyland’s storehouse. They also had a hotel,” Mickey explained. Although short-lived, the Stikine Gold Rush of 1861 brought sternwheelers ferrying gold hunters, traders and other fortune-seekers to Telegraph Creek from Wrangell, Alaska. The town got its name in 1866 when it was a staging spot for surveyors for an overland telegraph line, a transcontinental connection between North America and Russia.

“They’d laid the line from San Francisco on up but that project fell through when the first transatlantic cable was laid,” said Mickey.

Then came The Klondike Gold Rush. And the Alaska Highway in 1942. Goods were shipped up the Stikine then trucked from Telegraph Creek (over that steep winding road) before being transported by water again on the Dease River. 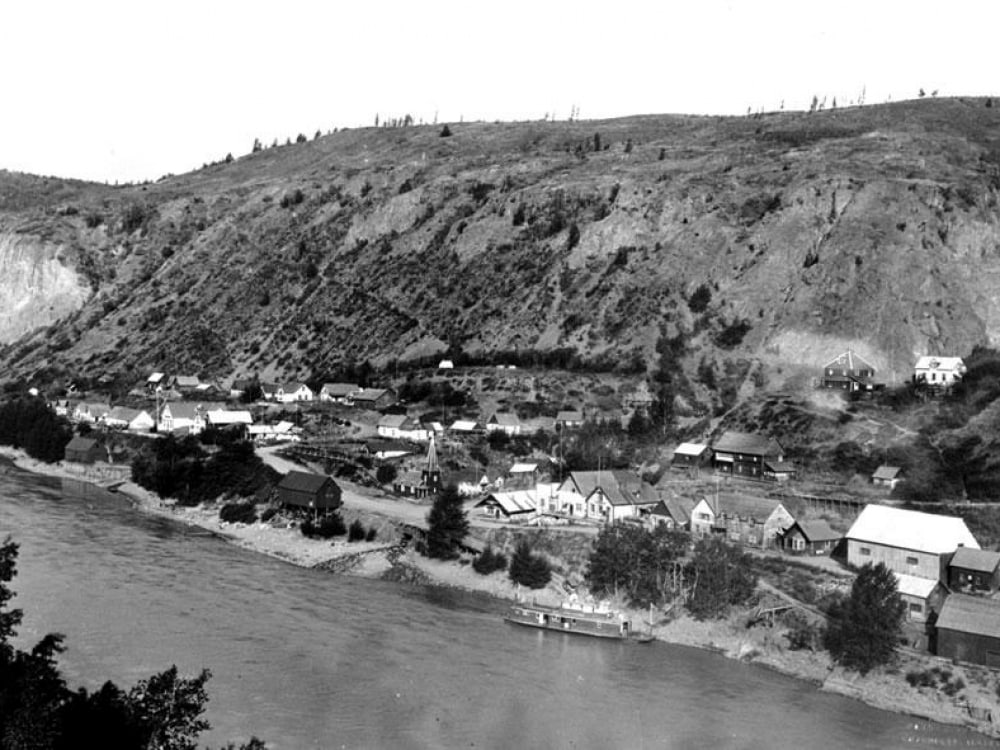 Telegraph Creek in 1920
(Photo: BC Archives) 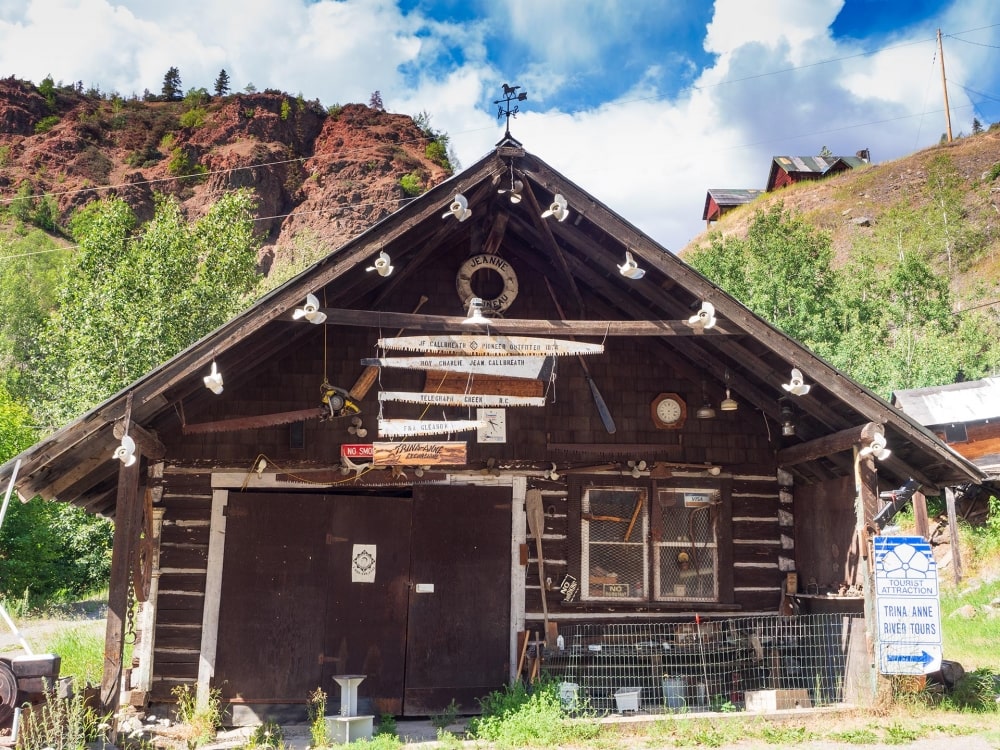 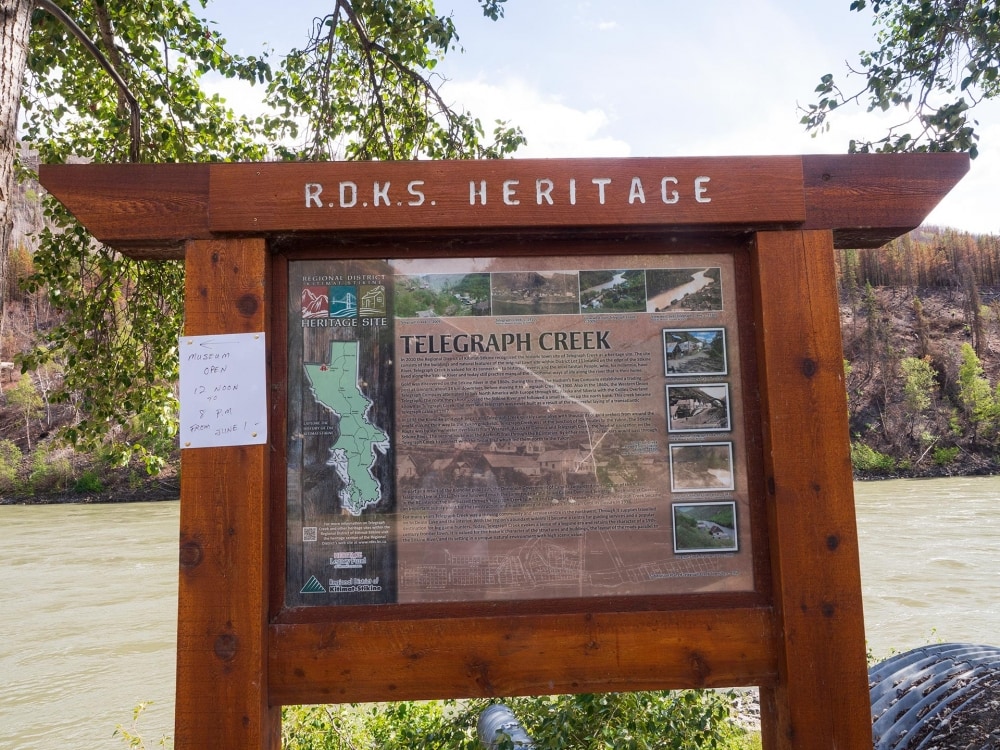 “My daughter owns that house, the one next to mine. But she’s not often here.”

“Does anyone else live in Telegraph Creek besides you?” Magellan asked.

Mickey said it was just him and maybe the woman at the B&B up the street. “Gone for a bike ride” read the sign in the window of the Stikine River Cafe Lodge. There are about 200 residents farther up the road in Telegraph Creek’s newer area.

I signed the guestbook, June 23. Someone else had been there the day before. As we were leaving, a guy had parked his motorcycle and was walking up toward the museum door. “And next month UBC is sending out some people from their museum studies department to see what I’ve done,” Mickey said. 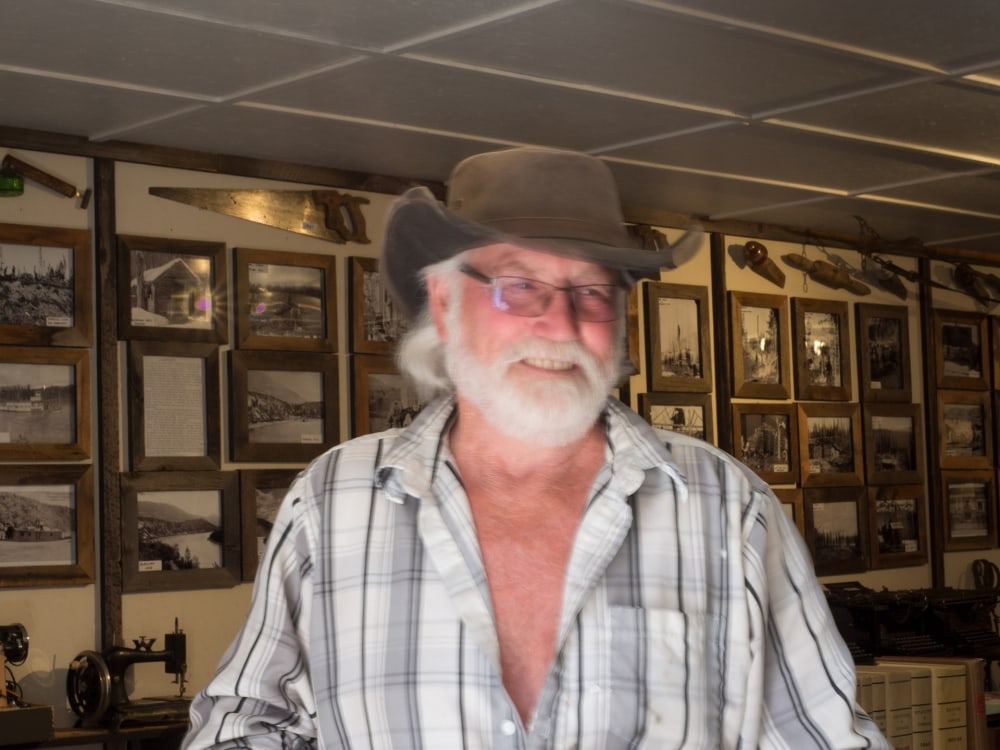 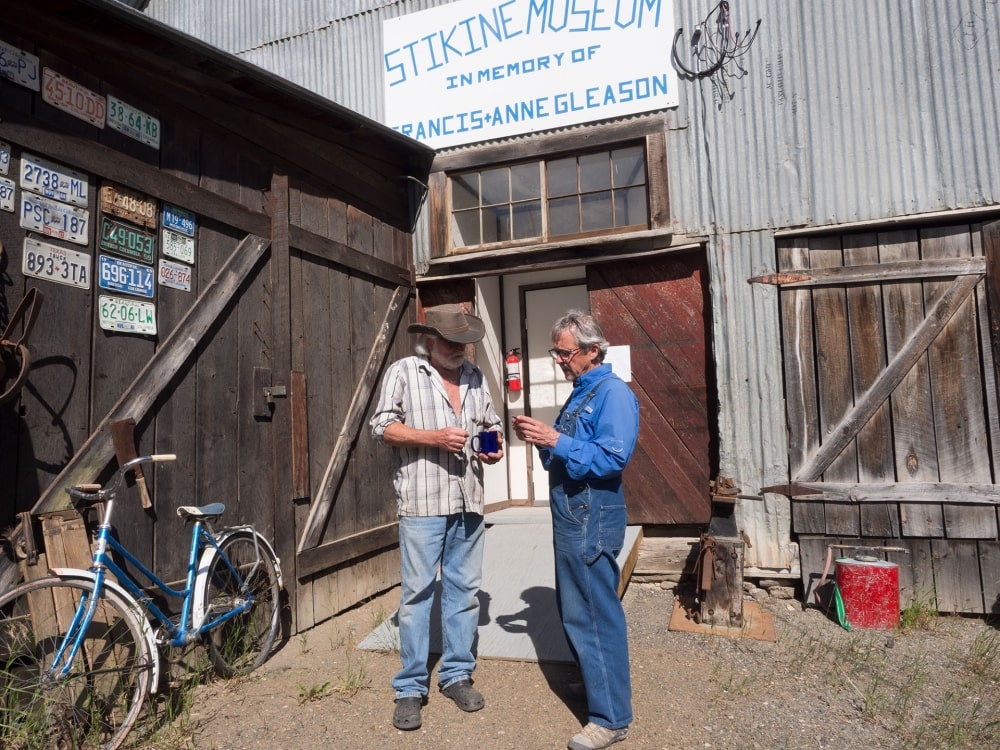 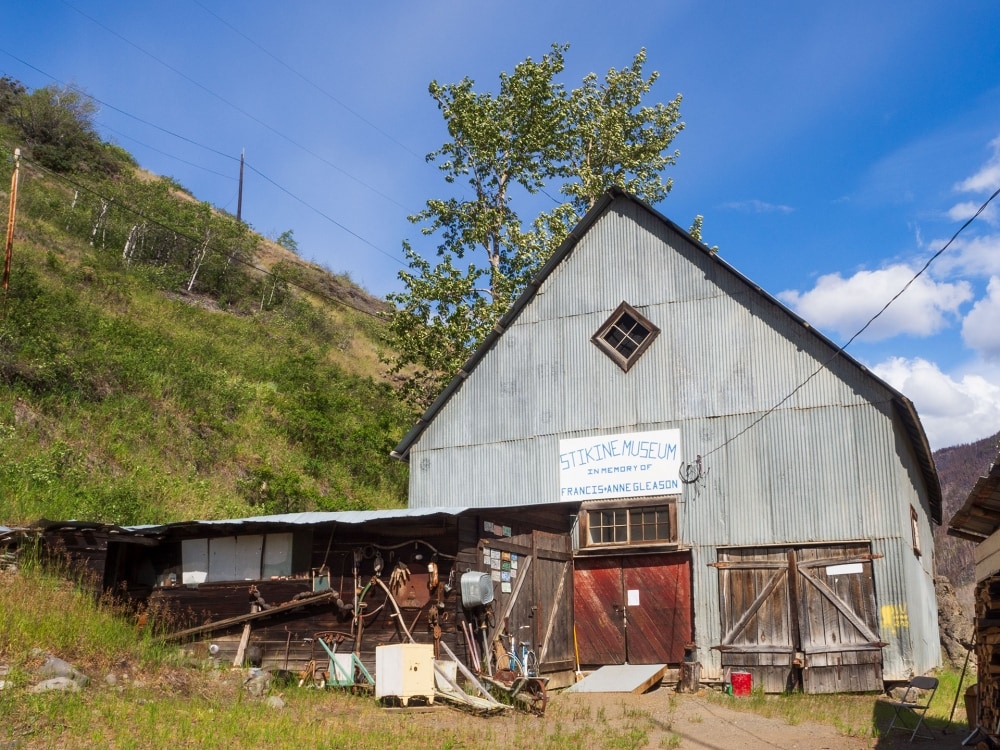 I found these words in an obituary for Francis.

We live as long as we’re remembered.

With the Stikine Museum, Mickey has ensured a long life for Francis.

Mickey’s museum, officially The Stikine Museum is open June 1, daily from noon to 8 pm. Admission is by donation. Be generous.

Canada’s #1 for Having the Most of These

The Woman who Loves her Pots
Scroll to top