The cliff steps of Grand Staircase-Escalante rising to Canaan Peak, 25 miles away

Last week we addressed Trump’s December 4 proclamation to shrink Bears Ears National Monument by 85%. On the same day, he cut our favourite place in Utah—Grand Staircase-Escalante National Monument—by 46%, from 2,000,000 acres to 997,490 acres.

You might remember our passion for the area from a past blog Anthem to Grand Staircase-Escalanate in which we described the haunting beauty of this remote area that drew us back for a return visit this spring. Let’s climb that staircase to see what’s happened.

How does GSE Compare to Bears Ears?

Grand Staircase-Escalante (GSE), designated a National Monument by President Clinton in 1996, was even more remote than Bears Ears.

Winding through oochred mesas and canyons, the most scenic highway on the planet

Only two paved roads traversed the vast GSE. Building the shortest one, only 124 miles, took four decades—now it’s rated the second-most scenic drive in the world.

It was an area of steep canyons. Coniferous forests. Isolated mesas. Colourful cliffs. Slickrock plateaus. The offspring of ancient dunes from an inland sea successively uplifted, buckled, folded, laid down “nude with rock…bones of the earth brought to daylight.”

What changes did Trump’s Proclamation Make to GSE?

He divided GSE into three National Monuments: Grand Staircase and Kaiparowits, which are contiguous, and Escalante Canyons, which is on its own.

Were there Economic or Political Drivers?

Yup. Coal development in the GSE went dark after Clinton’s proclamation with the government buying back the Smoky Hollow Coal Permit. Trump carved this lease area out of the Kaiparowits area of GSE, reopening it for coal mining, a lot of coal mining.

In 1994, the mining plan was to haul 7,000 tons daily in 300 coal trucks travelling 200 miles to rail stations for shipment to California and Asia. Massive deposits of high-quality coal here account for about two-thirds of Utah’s known reserves. About 22 billion tons, half that’s deemed “recoverable” according to the Utah Geological Survey.

Monumental words eliding the affinities of this sacred area

What will Happen with the Loss of Protection of almost a Million Acres?

Nicknamed the “Science Monument,” as many as 60 universities were conducting research at GSE in fields such as palaeontology, hydrology, archaeology and ecology with a decent budget from the controlling agency, the Bureau of Land Management. Many discoveries were made in the last 20 years under Monument protection, with many left to be found. Pioneering entomology was conducted on native bees. Dozens of species of dinosaurs, including the world’s largest oviraptor, were discovered.

Cretaceous fossil bed of oysters and ammonites, clams and snails in Cottonwood Canyon

But the science departments were cut, monumentally. Congress slashed the budget for managing the GSE, shrinking it from $16 million in 2001 to $4 million in 2016. Now there’s just one full-time scientist left, a palaeontologist. It’s estimated that 400 of the more than 3,000 scientifically important fossil sites in GSE are now in unprotected territory including a large section of Triassic petrified forest. The nickname “Science Monument” may go the way of the dinosaur.

Extremely rare, the 76-million-year-old Talos Sampsoni unearthed in GSE was discovered with a serious injury believed to have been caused while doing something dangerously high-risk
(Illustration by Lucy Livesay)

An article in the Guardian answers the question,  “Why are Palaeontologists suing Trump?”

I wondered, with all the rocks out there in the world, can’t palaeontologists just go somewhere else to study these time periods and fossils? Polly [David Polly, president of Society of Vertebrate Paleontology and professor of palaeontology at the University of Indiana] answers definitively, “many of the fossil areas inside the monument are unique. Nowhere else can you study the ecosystems of the Kaiparowits Formation, or the marine reptiles of the Tropic Shale. The only mammal fossils from important intervals in the Late Cretaceous are also found only in the monuments.”

GSE had the second-highest diversity of bees in North America—more than 648 species of bees, some of them endemic to the area, beelining to the firecracker colours of flowering plants. How much of this biodiversity will fly away? 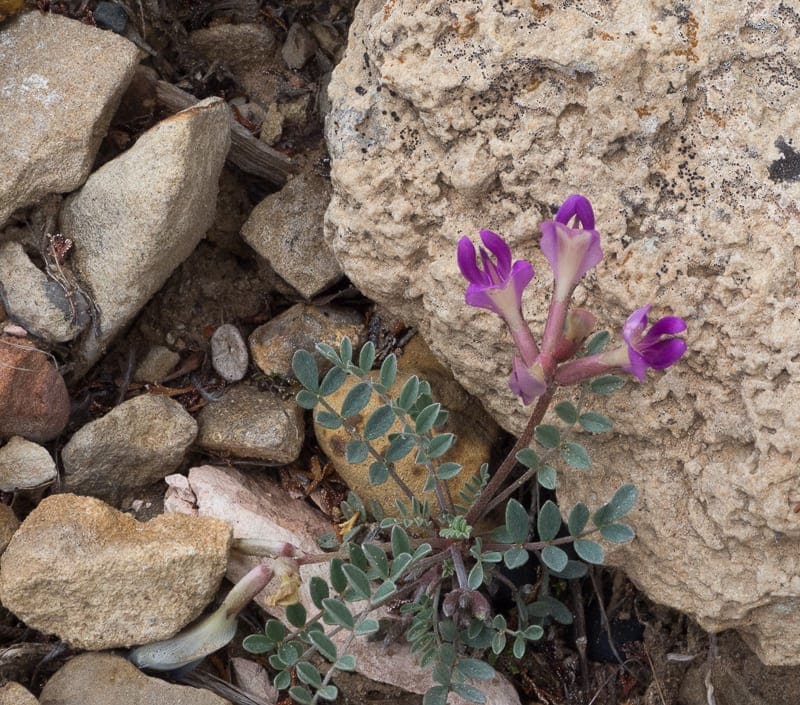 Rimrock Milkvetch, its sensuous flower petals opening to the sun

Indigo Bush and Indian Paintbrush waiting for the bees

Then there’s the bighorn sheep, already on the Endangered Species List. In Kaiparowits, a chunk of land that was their major habitat is no longer protected.

Within GSE, there were 2,000 miles of “roads” (wash bottoms, cow paths and two-track trails) that were closed but will no longer be restricted to motorized vehicles, creating an ORV playground similar to what already exists in the Moab region.

Then there’s the loss of protection for hiking trails.

Metate Arch in Devil's Garden is protected—by a few metres

Irrationally, Peek-a-boo, Spooky and Dry Fork—among the most popular slot canyons in Utah—are no longer protected. Wiggling through Spooky during spring break, I don’t know which was worse: the chokestone jungle or the choking dust from the hordes of hikers slithering through this slot canyon from both directions. “They need to make this a one-way slot,” said Russ, our photography guide. Not going to happen now.

Another hiking trail that’s no longer protected is Upper Muley Twist. Even though Rove-Inn took 41 minutes to travel three miles to the trailhead and we never did find the cairns to the Rim Route, one can’t deny that this arch-lined hike along Waterpocket Fold is outstanding.

Spring-green Cottonwoods on the tiny hike to Long Canyon on the Burr Trail Scenic Backway, one of Utah's most picturesque roads

What do Utahns Think?

As we mentioned in last week’s blog, many Utahns resent the fact that 66% of the land in their state is owned by the federal government. (By comparison, the figure is only 1% in British Columbia and just 41% for the whole of Canada.)

When GSE was proclaimed in 1996, the Utah congress along with state-elected officials and county commissioners felt it was a usurpation of power. “Locals saw no need for more protection of the landscape they’d assumed was theirs since Brigham Young sent their ancestors down to spread the gospel,” writes Terry Tempest Williams. They argued that the proclamation exceeded the intent of the Antiquities Act of 1906, which says that presidents should limit designations to the “smallest area compatible with proper care and management.” Opponents in Kanab, Utah, donned black armbands and burned Clinton in effigy while school kids released black balloons and hoisted a black flag. (Clinton and Gore signed the proclamation at the Grand Canyon in Arizona instead of coming to Utah, which many Utahns felt was downright cowardly.)

Here's Santa Claus Rock on the right at the entrance to the "Squeeze," where the layers of Navajo, Carmel and Estrada formations tilt to the northeast

Misinformation abounds and according to an excellent article in High Country News, was purposefully disseminated, setting GSE up to fail. For example, many people believed cattle grazing was restricted by Clinton’s proclamation; it was not.

But not everyone in the state feels the Staircase was too wide. A poll this summer showed that more than half of Utahns wanted GSE left intact. For good reasons. After the 1996 proclamation, news of the beauty of GSE, an area once known only to ranchers and hardy outdoors folk, escalated, attracting travellers from around the world. From 2001-2015, prosperity escalated, too. The population of GSE grew 13%, per-capita income grew 17% (outperforming Utah’s average for 2010-2015), jobs grew 24% and personal income grew 32%. In that period, non-labour income grew 49% and is proposed to continue as more jubilados like us travel to experience the awe in Utah.

Taking its name from one of the most dramatic bridges in the world built over one of the most precarious corridors in Utah, Blake and Jen consider their restaurant a bridge to the community

The Slot Canyon Inn, where a secluded wilderness environment and genuine hospitality converge

What angers many people is the high-horse manner in which Interior Secretary Ryan Zinke conducted his research this spring—riding with ranchers, cozying up to congress and holding private meetings with county commissioners, the latter a violation of Utah’s open-meeting laws.

What are People doing to Stop this Illegal Dictate?

Suing Trump and Zinke. The Society of Vertebrate Paleontology, the Wilderness Society, the Natural Resources Defense Council, the Sierra Club, representatives from the Hopi, Zuni, Ute Mountain Ute, the Navajo Nation and the Ute Indian tribes, and other groups cite the decision to reduce the size of GSE as unlawful and exceeding the delegated authority under the US Constitution and the Antiquities Act.

What can we do?

The red hot sandstone is a magnet for passionate engagement, a sensual landscape that inspires love—a wild terrain to be explored and respected.

That quote comes from the cookbook With a Measure of Grace from Hell’s Backbone Grill in Boulder, Utah. We suggest you buy it for Christmas, make up some Spicy Cowgal Meatloaf and Marry-Me Cornbread and over dinner, start planning your trip. And you know where to send that lump of coal.

UPDATE: November 2, 2019. I’ve just read (and highly recommend) This Land How Cowboys, Capitalism, and Corruption are Ruining the American West by Christoper Ketcham. If you think the BLM (Bureau of Land Management), Fish and Wildlife Service, Nature Conservancy and a host of other organizations are protecting public lands, you’ll find out how they are “mostly fellating the energy and livestock industries.” Christopher writes, “An informed public will be an enraged public.” You will be, guaranteed. He should be nominated for the Pulitzer Prize.

Through his company Backyard Journeys Russ Nordstrand takes small groups on specialized photography tours. Without him, we may never have discovered Grand Staircase-Escalante.

Castle, Jen and Spalding, Blake. With a Measure of Grace. Santa Fe: Provecho Press, 2004. Jen and Blake’s Hells Backbone Grill is named for the bridge that opened Boulder to automobile traffic in 1933. Their organic restaurant includes a six-acre farm, straw-bale greenhouse and heritage hens—in Boulder (population: 222). Blake and Jen have just written a second cookbook This Immeasurable Place: Food and Farming from the Edge of Wilderness. UPDATE: See the fantastic article “Food Fight” by Kathryn Schultz in The New Yorker, October 1, 2018, for more about Blake and Jen and what they are doing “at the remote outpost of the resistance” to Trump’s devastating order to cut 85% of Grand Staircase-Escalante.

Copeland, Kathy and Craig. Hiking from here to WOW UTAH CANYON COUNTRY. Birmingham, Alabama: Wilderness Press, 2015. What do they say about GSE? “…it affords as beautiful an experience as it’s possible to have, not just in canyon country, but anywhere on earth.”

Panciroli, Elsa. “Why are Palaeontologists suing Trump?” The Guardian, December 13, 2017.

Scenic Highway 12 ranks second in the world for beauty, only a step below State Highway 94 in New Zealand connecting Te Anau with Milford Sound.

Slot Canyons Inn: Here on this secluded property, a wilderness environment and genuine hospitality converge. We like it so much we blogged about it at Bread and Jelly. Slot Canyons Inn is listed among Utah’s top nineteen B&Bs (don’t ask us why they chose this number).

I Wonder as I Wander
Scroll to top