The sun and the movement of the earth—the oldest phenomena our naked eyes can see.

Imagine an artist whose life’s quest is to show us that phenomena.

An artist who wants us to be “a little more aware than you were the day before of how beautiful the world is.”

That artist is Robert Irwin.

The earth has rotated hundreds of times and revolved almost twice since we saw Robert (Bob) Irwin’s Untitled (dawn to dusk) in Marfa in West Texas. It’s been called his “defining achievement.” This artwork is an entire building dedicated to the subtle articulation of light—to the simple joy of the infinite possibilities of light in every new moment.

The light in Marfa is intense. Desert light so clear and fiercely bright that your eyes want to squint, then open wider to take it all in. Here’s how Bob described Marfa’s light to his biographer Lawrence (Bob calls him Ren—they’re sitting together in the last photo below) Weschler, “I love walking down the street when the light gets all reverberant, bouncing around like that, and everything’s just humming in your face.” In essence, perfect for his lightscape art.

Before I describe Untitled (dawn to dusk) let me give you a little background of where it sits.

Founded as a railroad town in the 1880s, Marfa became an outpost for the government to monitor the Mexican Revolution. Later named Fort D.A. Russell, the outpost expanded during WWI and WWII. In 1946 the entire fort was decommissioned, including a hospital (shown in the first photo below) that dated back to 1920. Marfa fell into serious decline until the artist Donald Judd began buying up the old military properties and downtown real estate for his site-specific sculpture in the late 70s. (Coincidentally, Bob happened to be in Marfa when Donald was scouting the town.) In 1986, the Chinati Foundation bought 340 acres on the former site of Fort D.A. Russell “to preserve and present permanent large-scale installations” by Donald Judd and other artists whose “work is inextricably linked to the surrounding landscape.” Artists like Bob Irwin—in 1998 Chinati commissioned him to turn the site of the demolished hospital into art. The result is Untitled (dawn to dusk), building and grounds designed to be “landing strips for light and shadow” to heighten our sense of the sun’s daily transition. Untitled (dawn to dusk) took seventeen revolutions of the earth to complete, opening in July 2016 when Bob was a spry eighty-seven-year-old artist.

The only way to see Untitled (dawn to dusk) is to sign up for a guided tour with the Chinati Foundation, which is what Magellan, Teresa, Paul and l did. Can you believe that our jubilado guide was a former Canadian named Glenn who had moved to Marfa from Edmonton?

Untitled (dawn to dusk) is a C-shaped building, ten-thousand square feet in size and fabricated from concrete blocks covered in plaster, architecture that emulates the shape and military ethos of the former hospital. A concrete and gravel walkway splits the four-acre property.

The interior is bare, completely unfurnished. It is divided into white-and-black corridors bisected by translucent floor-to-ceiling scrims (gauzy screen panels), also in white and black. In the centre corridor are two white scrims, side by side. Highly polished, the gray cement floors silver with luminosity.

A sequence of rhythmically spaced windows “railroad” down the face of the structure. Tinted with a gray material, the glass gradates the sunlight beaming through rectangular windows. Because the windows are placed quite high, mostly you see the generous sky ribboned by a thin strip of landscape at the bottom. (Teresa, Magellan and I anyway; Paul is as tall as Bob Irwin.) The north corridors orient to the mountains, the south ones toward Big Bend National Park.

When you enter on the right, four doorways lead to the white corridors. Here, the walls are painted light gray. Milky white scrims diffuse the quality of sunlight flooding the space, limning transparent window-sized images on the walls and floors. I loved the evanescence of these lightscapes attuning their fleeting response to the silent rhythm of the sun. Spatial illuminations of clean, spare beauty, they have been described as “a series of vibrant monochrome paintings.” 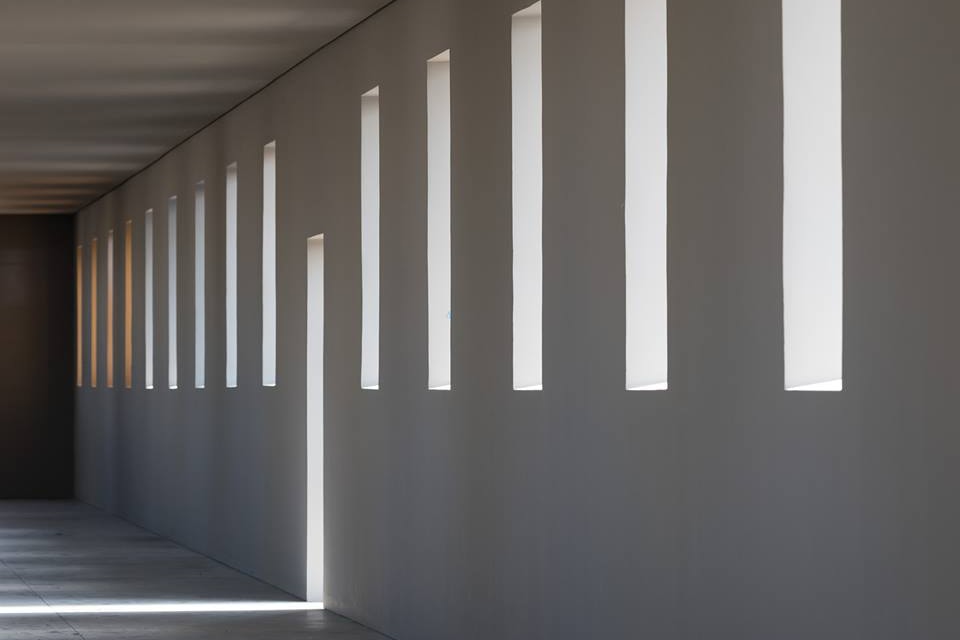 The design is mirrored on the left side of the C-shaped building, except here the four doorways lead to dark corridors and black scrims. The interplay between the exterior and interior landscape is quite different from that in the white corridors. A little unsettling, I found. Some antechambers have no ceiling, referencing the hospital’s ruins and contributing to a sense of unease. Perhaps it’s meant to be a metaphor for the mostly life and sometimes death equated with hospital life, a metaphor that could be extrapolated to the wider world and beyond to the universe itself.

The site is full to overflowing—with light, with landscape, with history… All these things I’m doing are the best I can do to make sense out of being in Marfa. There’s no such thing as permanence. Everything is changing all the time. The quality of the light isn’t permanent. The environment around it changes. How you enter, where you come from, why you come, all those things are continuously changing. That’s, to me, the life of the thing.

And here’s how he explained his work to writer Adrian Kohn. “A lot of people will just say, ‘Oh, it’s an empty room,’” Irwin noted of his spaces in general. “All those things going on in that room, all that physicality in that room, somehow does not exist. Actually,” he pointed out, “the room is not empty. I mean, on any kind of perceptual level, that room is very complex. It’s loaded with shapes, edges, corners, shadows, surface, you know, textural changes.”

I wanted to know more about Bob, the man who exhibited the beauty of this phenomena, an artist as complex as the work he creates.

Born in the California sun in Long Beach, he was fond of cars and often wears a baseball cap with a patch that reads “Old Guys Rule: High Mileage, Low Maintenance.” He served in the Army before attending art institutes in LA. His Abstract Expressionist works were first exhibited along with those of Richard Diebenkorn and Clyffors Still, and he was one of the three leading members, along with Doug Wheeler and James Turrell, of the art movement known as Light and Space that arose in the 60s in Southern California. Bob created reductionist paintings, going from Early Lines to Dot Paintings to Discs. From the beginning, he saw light as integral to his work—described for the Sao Paulo Bienal as “a field of color energy.” His first one-man show was at the esteemed Pace Gallery in New York but three years later in 1969, he closed his studio. Why?

Ren writes, “Already by 1964 Irwin was spending much of his time outside the canvas, attending to cracks and windows and floorboards, because all of these things were impinging on the reality of the canvas.” Bob didn’t want to create objects; he wanted his art to be “the experience of seeing yourself see.”

A polymath, Bob read philosophy, spent three years researching perceptual phenomena for NASA’s manned space flights and taught art. He received the five-year MacArthur Fellowship—the first artist to whom it was awarded. He has always lived simply, augmenting his earnings by betting the horses at the Del Mar Racetrack. Married three times, twice to the same woman, he and his wife Adele and live in San Diego and have a grown daughter, Anna Grace (lovely name isn’t it? Anna Grace applied 38,000 staples to the scrims for Untitled (dawn to dusk).

For the most part using merely scrim, tape, wire, paint and natural light, Bob has created about seventy-five site-conditioned pieces, including the architectural design of Dia:Beacon, a former Nabisco factory on the banks of the Hudson River outside New York—the first place we saw his work (lovely), which Peter Schjeldahl of The New Yorker delighted in (imagine what he’d say about Untitled (dawn to dusk)):

This may be the upward limit of what liberal culture can provide for the common soul. Perhaps it’s enough. Certainly Dia:Beacon stirs grateful awe. Look at what we humans can do!

Robert Irwin isn’t well known, despite creating work that for decades has been called “light years ahead.” Jessica Morgan, foundation director of Dia:Beacon says, “With Bob’s work, I think there’s been a kind of laziness in the art world in terms of understanding exactly what he’s been doing,” adding that his “self-effacing approach, and disdain for much of the money-driven contemporary art world, has contributed to his under-the-radar status.”

I like Michael Agresta’s description of experiencing Untitled (dawn to dusk).

There are few places in the world where audiences are confronted with works of art in dialogue with their natural surroundings, through the cycles of day and night, the seasons, and the passage of decades. These special places force new generations to question the ideal of the artwork as a product that can be bought and sold and moved from place to place. They also suggest a different way of experiencing beauty—not captured in a frame, insulated from context, and guarded behind ropes but alive to the ways of the world, drawing depth and meaning precisely from that contingency.

The oldest phenomena as art. As Bob told Ren:

I don’t really invent or create anything. I just look at the world. I’m looking at it all the time, and it’s just full of stuff that is so beautiful and so rich—in most cases more beautiful than anything I’ve ever made…Who cares about virtuality when there’s all this reality—this incredible, inexhaustible, insatiable, astonishing reality—present all around!

Chinati: (Personal photography is not allowed at untitled (dawn to dusk)—all of the photos on this post are from Chinati, most of them by the photographer Alex Marks.) We saw Robert Irwins’s untitled (dawn to dusk) as the last stop on a full-day tour. By then it was only Magellan who was stepping lightly, Teresa, Paul and I were flagging. Experiencing it repeatedly over a few days at different times is something the four of us agreed would be a worthwhile experience. The best way would be to view Bob’s work Friday through Sunday from 9 am-11 am on your own, as part of a Selections Tour that takes two and a half hours in the afternoon and then book a private tour for dusk. Check out Chinati’s newsletters 12 and 21 for lengthy interviews with Bob.

Frisell, Bill and Morgan, Thomas. “Poet/Pearl.” Small Town. This music is the best I’ve found for an affinity with the hum of Untitled: (dawn to dusk).

Weschler, Lawrence. Seeing is Forgetting The Name of the Thing One Sees. Berkeley: University of California Press, 1982. I’m indebted to Wade for recommending this highly readable biography, mostly a free-associative conversation between two wildly intelligent friends. It has been updated since 1982. Expect a third revision.

Canada’s #1 for Having the Most of These

The Chicken’s Wedding
Scroll to top