“You should write about it mom,” Lynn kept telling me.

About growing up in the dark. Not having electricity until I was six years old!

With the pre-solstice light diminishing fast as my memory, I’ll try to regain that experience, “turning it around, slowly, in the light,” as Virginia Woolf says.

If grade four students still study pioneers in Canada, they have an inkling of my childhood, even though I was born half a century after Western Canada was populated with immigrant farmers. 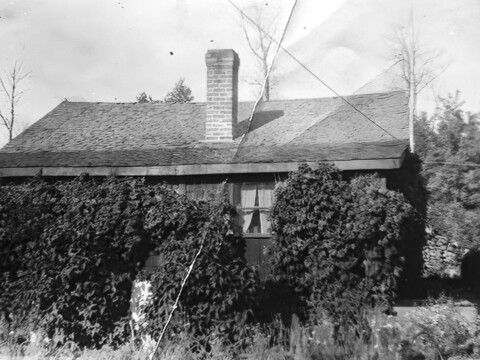 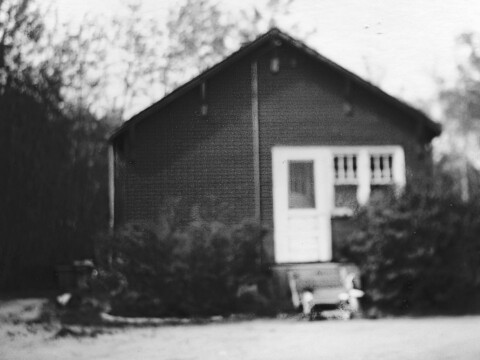 My grandpa MacLeod and his younger brother Donald emigrated from the Isle of Lewis in the Hebrides in 1906, the attraction of free land in Canada outshining the limitations of the family croft and courier business. They were each granted a homestead in the Rural Municipality of North Invergordon, pretty much in the centre of Saskatchewan. Before my parents married in 1948, dad and grandpa built our small farmhouse, just around the bend from where dad grew up. A year later, they needed a crib for me. 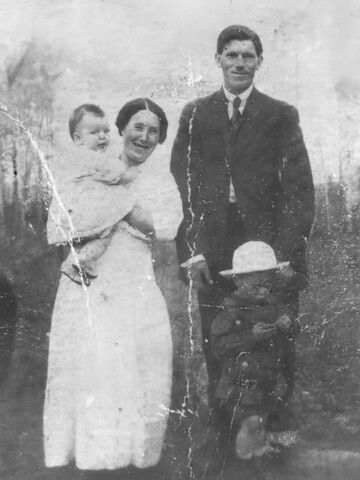 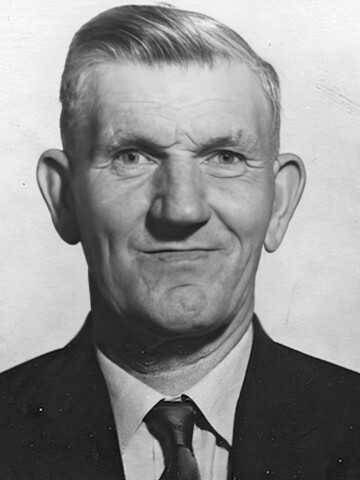 Grandpa MacLeod, likely his passport photo for his trip to Scotland ~1958 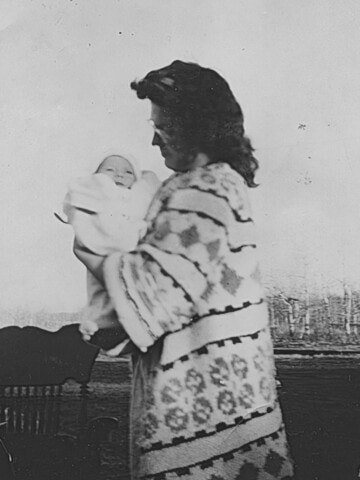 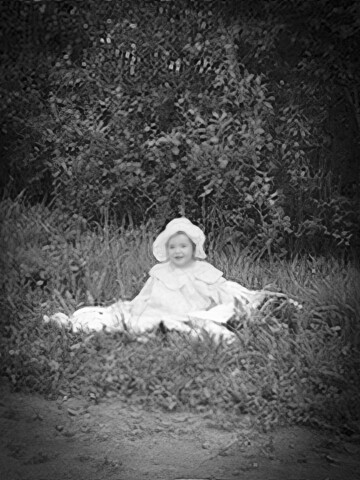 My earliest memory is waking up in the middle of the night, turning the radio dial in the living room, and curling up in the dark to listen to the quiet music and the sotto voices of the CBC.

Without “the power” as we called electricity in those days, it must have been a battery-operated radio. Light came from coal-oil lamps. I remember two, a simple one of clear glass and a fancier version, milky white with red roses.

My strongest memories of life before we got the power are of the winter of 1955/56—one of the coldest in the province’s history, huge drifts blanketing the roads, snowbanks almost as high as the telephone poles. Because of the severe weather, Mom, who was expecting, spent the month before our baby brother Norm was born in Prince Albert, and my pre-school sisters, Joyce and Margie, stayed with my grandparents in town, Crystal Springs. I was in grade one. 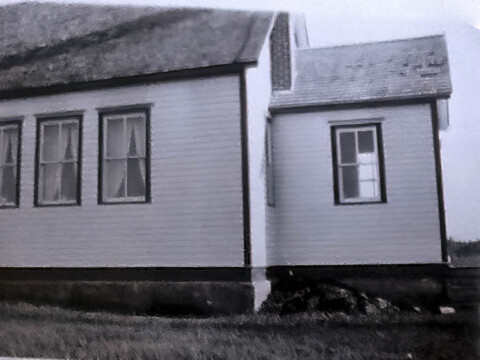 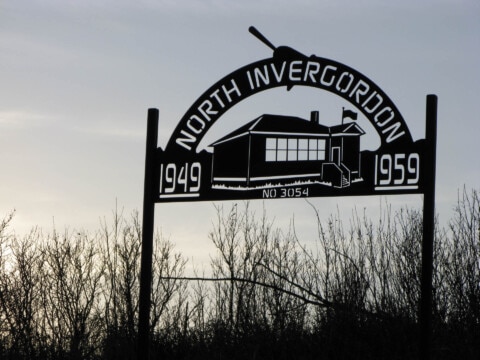 Our teacher, Miss Norah Kreuzweiser, was only twenty years old when she started here in 1955

Dad or the hired man (how did we afford him that one-and-only winter?) often drove me the mile and a half to the one-room school—in a horse-drawn caboose! If neighbours kindly came our way instead of taking the shorter route, I climbed into in a sleigh with their kids. Oddly, I don’t remember the school’s electric lights. It’s the funky smell of a classroom full of sweaty kids, damp wool, dry chalk and old books that’s stayed with me.

I have no photos of our caboose, but here's one from 1930 from the Saskatchewan Western Development Museum 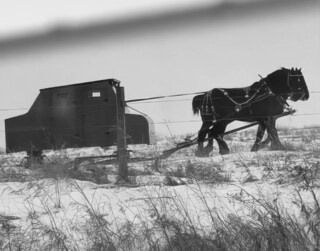 With a caboose, I missed only nine days of school that winter according to my report card (Photo: Oh My) 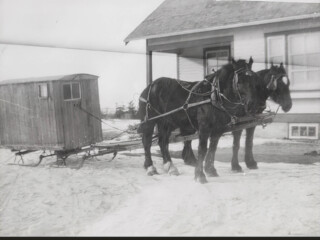 As I recall, our caboose had a small stove inside (Photo: What Next?)

Sometimes that winter I walked home, accompanied by my older cousin Dennis for the first half of the trip before he dropped off at his place. One particular afternoon stands out, fresh as yesterday, me, alone, walking on the tall hardened banks of snow, a tincture of light in the sky the colour of pale apricot, my first appreciation of the natural world.

It was the first winter I could read on my own. I’d get a book (the school had a few and mom ordered stories for us from the public library in Regina), pull up a chair, open the oven door of our wood-fired stove, stick my feet on the door and turn the pages. 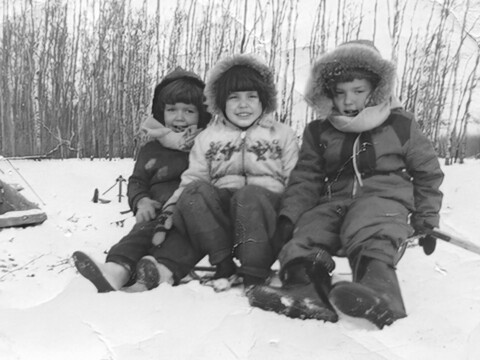 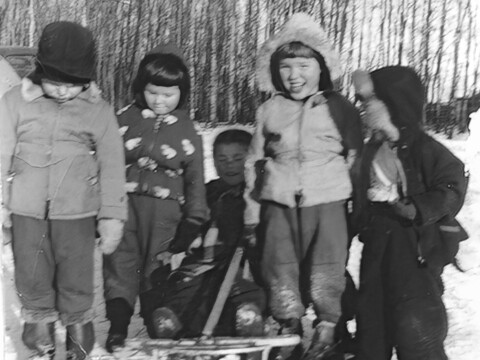 “You must have been cold in that house,” Lynn said a few weeks ago. Though the frost on our small windows was fingered with my scratching, our house was warm and cozy, heated by a basement furnace and the kitchen stove. 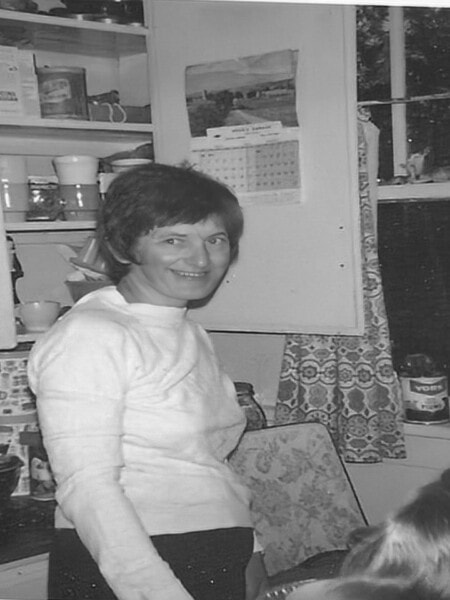 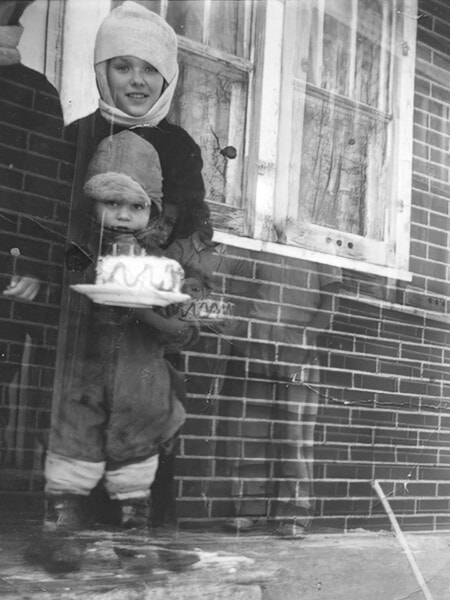 Stamped "January 1961," my brother Norm holding Joyce's 10th birthday cake (no running up town for more candles!), me in the headscarf

You could say I lived in the dark. Our farm was three miles from “town,” the hamlet of Crystal Springs. Too far away for night-sky pollution, not that there was much from a place with only a few dozen homes, three stores, two churches, a gas station, a hotel, a café, a school and a hall with a dance floor and two-sheets of ice. And the train station. From home, listening to the distant whistle of a nocturnal train was my dreamy passageway to a bigger world.

Was it awful to grow up on such a small, hard-scrabble prairie farm with Siberian-like winters, no running water, no power until mid-1956 and no TV until my teenage years?

There were times in later years when shame and discretion kept my early life in the dark from certain others, but as young children, we didn’t consider ourselves poor. How could we with loving neighbours like Fern and Chad, generous grandparents nearby, teachers who cared and a whole community that celebrated the procession of seasons together? If you wanted space, you went outdoors. Or, more likely, escaped inside a book. Or thought about how different life would be when you grew up and went away, which as a teenager I couldn’t wait to do. Not realizing that the imprint of early life, like your shadow, is always there, in the light or its abeyance. 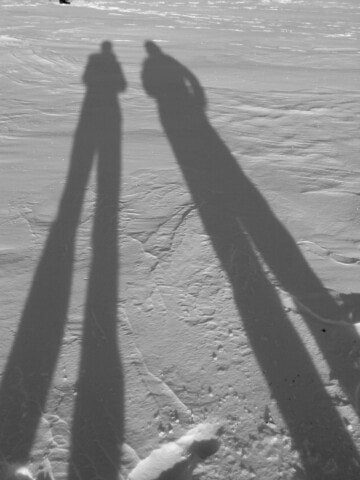 “We find beauty not in the thing itself but in the patterns of shadows, the light and the darkness, that one thing against another creates.” 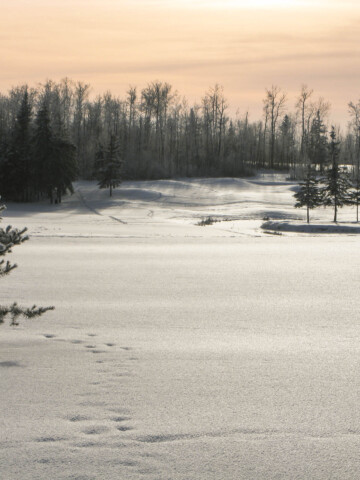 Light, at the end of its eight-minute journey from the sun, waving shadows through the banks of snow

The lamp shown is from Etsy, the glow created by Magellan.

Oh My Source for one of the photos of a prairie caboose.

What Next? Source for one of the photos of a prairie caboose.

Woolf, Virginia. Mrs. Dalloway. London: Flamingo Modern Classic, 1994. Here is the beautiful sentence partially quoted above. “The compensation of growing old [is] that the passions remain as strong as ever, but one has gained – at last! – the power which adds the supreme flavour to existence, – the power of taking hold of experience, of turning it around, slowly, in the light.” 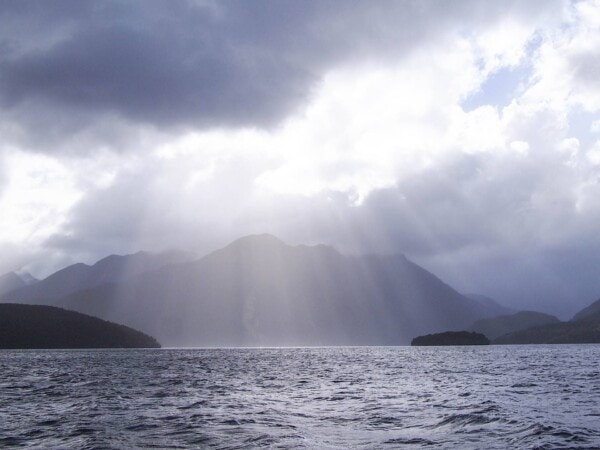 Never Doubtful it would be a Good Time

Before she put the bus in gear to head up Wilmot Pass to Doubtful Sound, our driver Cat (and she was a cool one), said 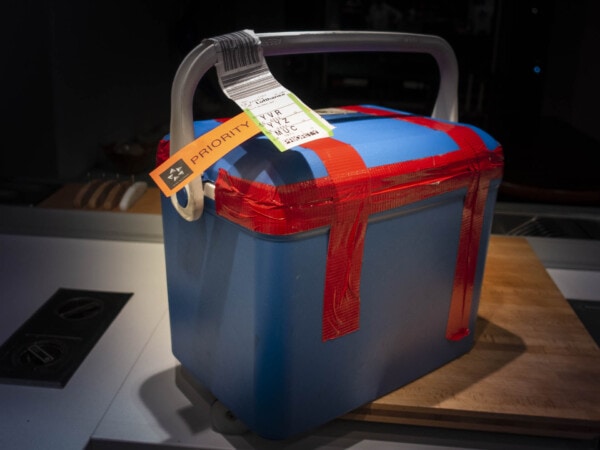 Our Favourite Piece of Luggage

At our age, we’ve got a lot of baggage; I mean luggage. Big and small. Two-wheeled and four. Heavy and light. Burgundy and rusty orange. 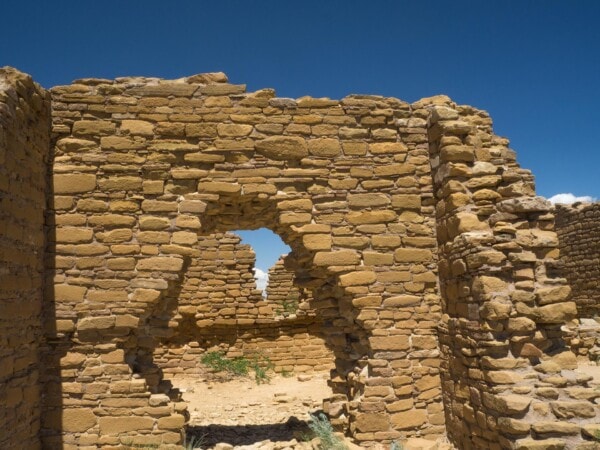 Chaco: Lining Up for the Solstice

“Everything starts with Chaco,” writes archeologist Steve Lekson. Chaco: built in the northwestern corner of New Mexico between 850-1150 AD—the most advanced civilization in North 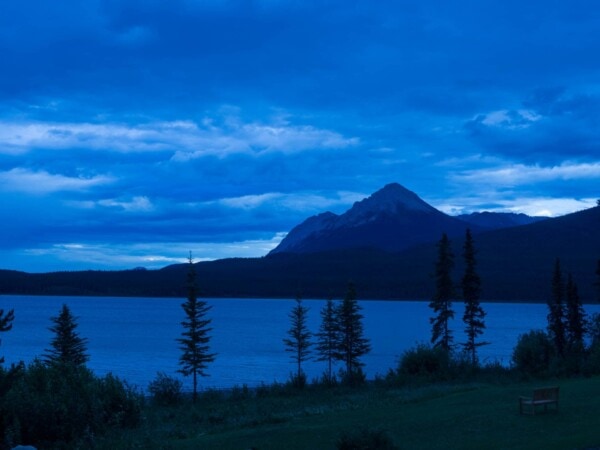 On Tagish Lake, A Rare Find

Camping in the Yukon in Rove-Inn, many sunsets since our last real shower, late afternoon on the longest day of the year, we decided to 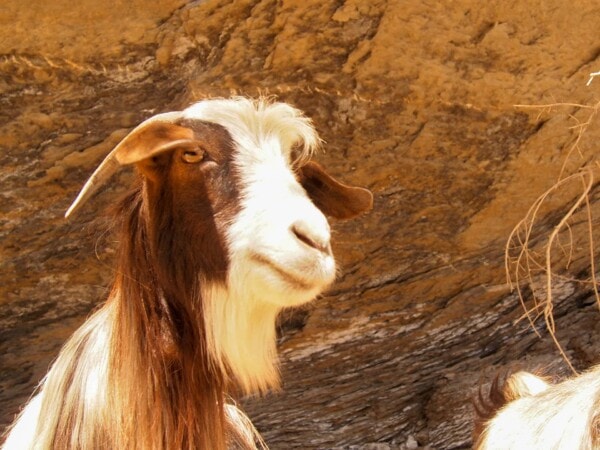 August, is that you again? Seven years ago on August 2, Magellan and I launched Latitude 65. For 362 Sundays around 6 a.m., we press 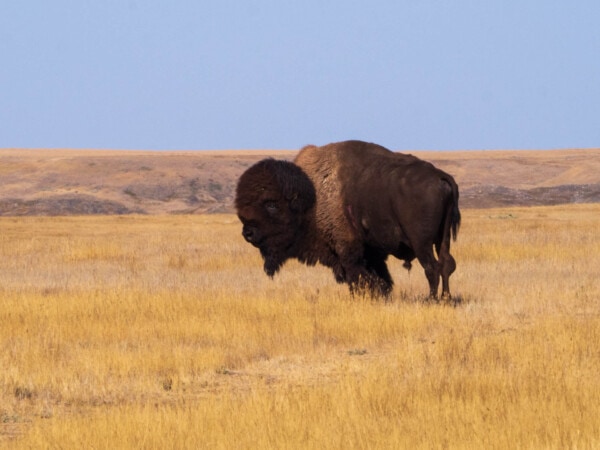 Nowhere else have we travelled where the sky so big, the light so clear, the landscape so revealing, the quiet so widespread, the solitude so

This handy little widget allows you to easily click to our most recent stories, as well as our most popular posts and comments. You can also use the category widget to refine your search. Enjoy!

We’ve got lots more travel stories to come, so please sign up below to continue the journey. Using MailChimp, we’ll notify you each time a new post is added to our site, more or less weekly. Your info is safe with us — we promise not to send it on any trips.

We have lots of categories and tags to help you easily refine your search in our stories, but feel free to use this feature to find unique items. Perhaps try something delicious like ‘paella’.