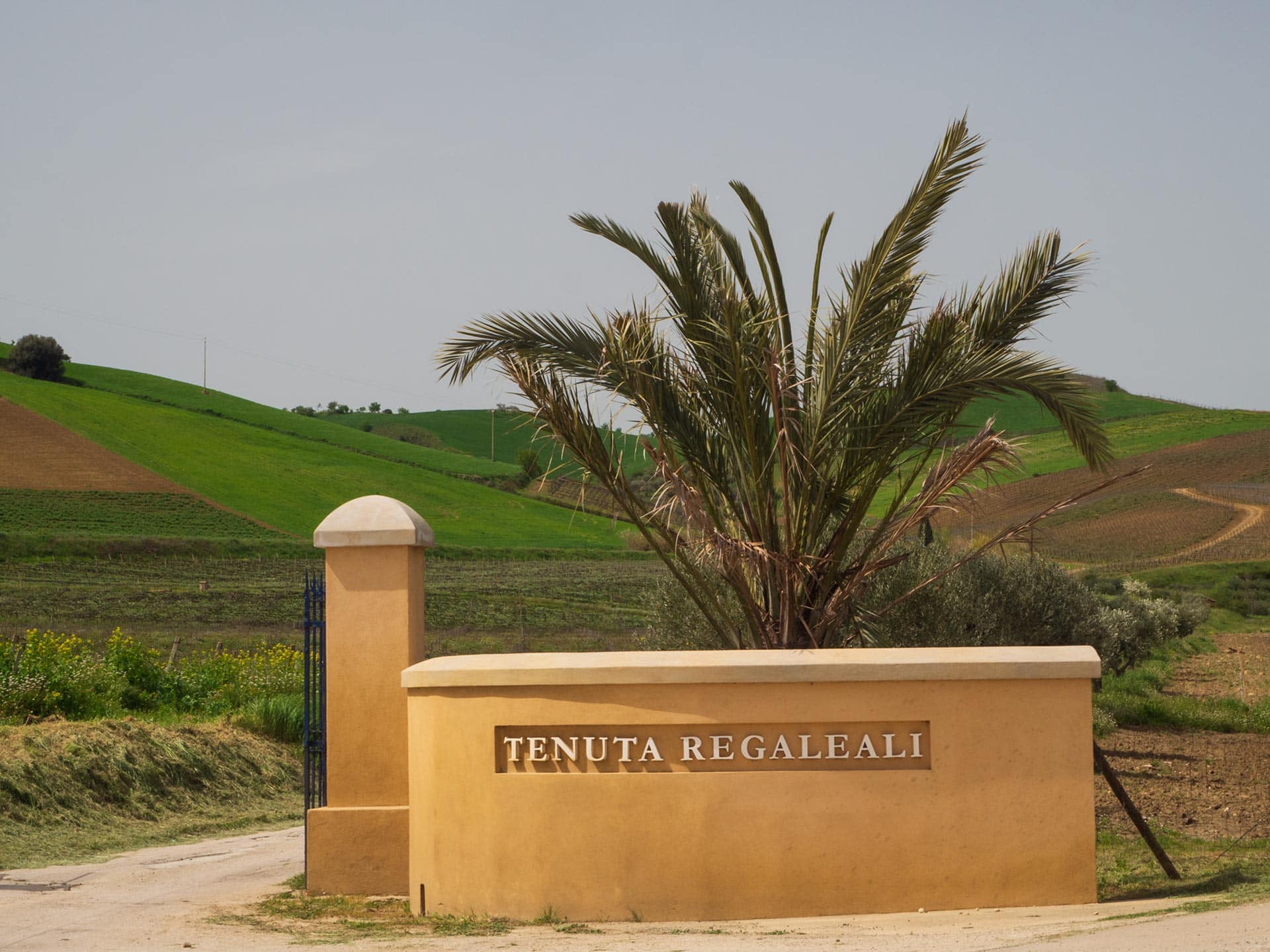 Sicilians have a special word for silence, Antisa. “Like the silence as you wait to hear the call of a bird…before you shoot it,” Matteo explained as he toured us around Tasca’s vineyards.

You’d be wrong to think Matteo, who’d just completed his masters’ degree at the University of Bologna, is some sort of crazed hunter. Quite the opposite—he’s more likely to rave about the Sicilian Rock Partridge and why it needs to be protected. (And a way with words given his memorable explanation of antisa.) It was the first of many contradictions Magellan and I experienced at Tasca Regaleali, a Sicilian winery dating back to 1830.

Matteo and his girlfriend Lauren took their chances and applied to work at Tasca as a couple. Logically, you and I might have expected old-fashioned stuffiness and a firm rejection letter from Tasca, hand-written on thick stationery. We would be wrong. Tasca hired them straight away.

Tasca has only seven tourist rooms. They are in the old family home whose foundations were laid down in the thirteenth century. On their website, the small, dull photos of the rooms were not exactly enticing. No booking agencies for them—to reserve a room I had to send a request and then email our credit card number. But we wanted a quiet experience at a winery and Tasca’s out of the way location felt like the right choice. 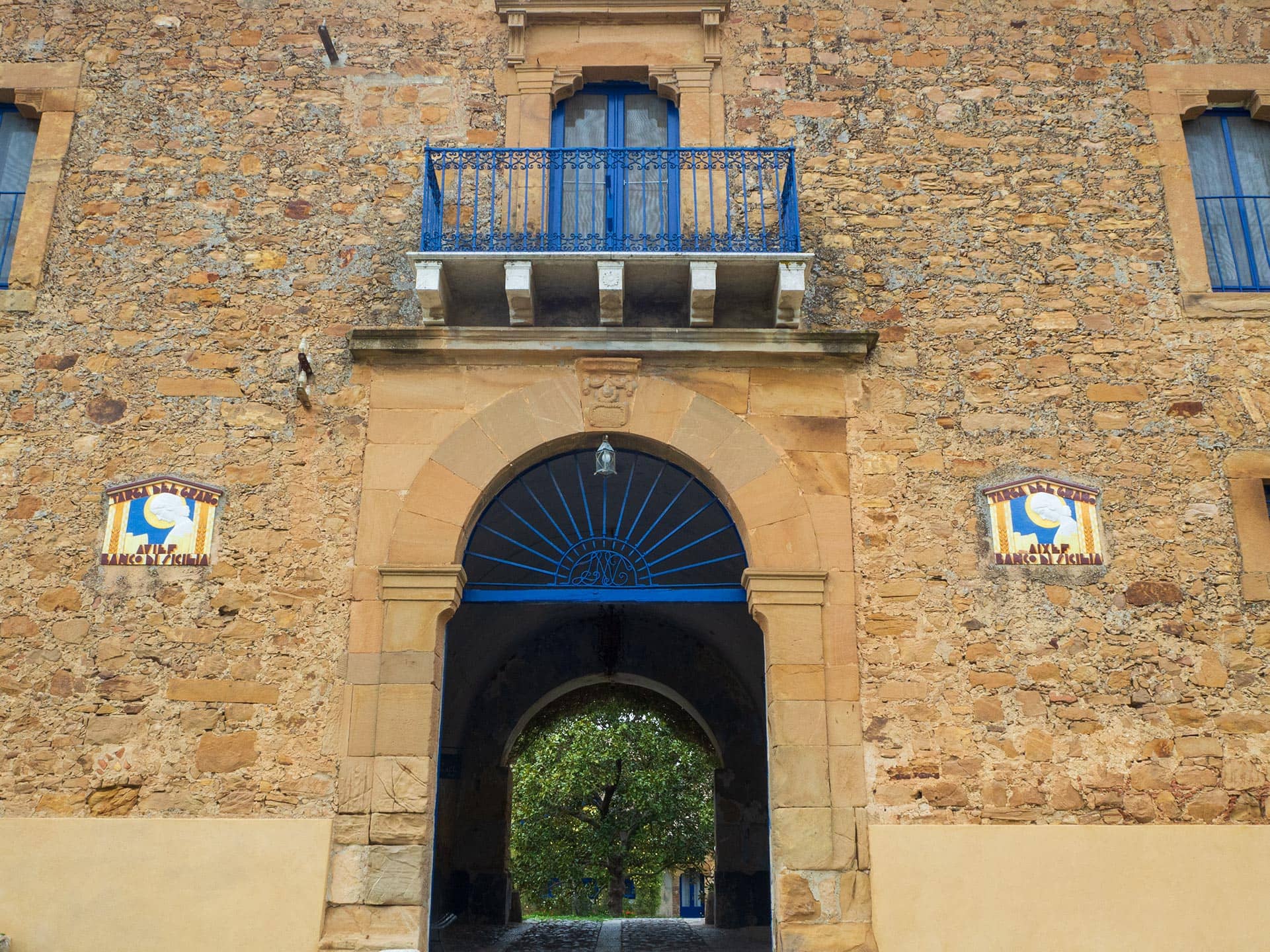 Through the arch, a seventy-year-old magnolia tree 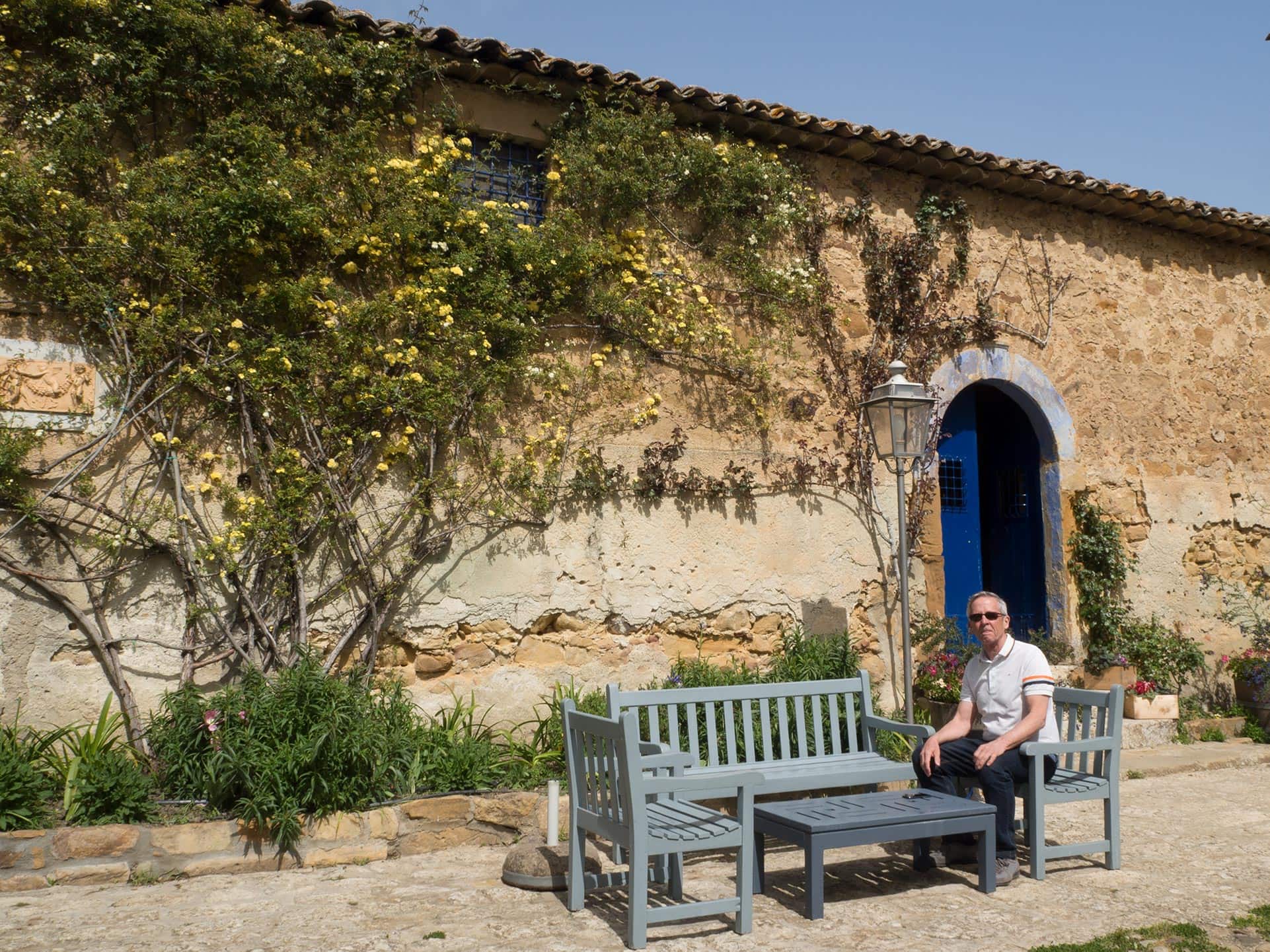 The door behind Magellan leads to the formal rooms 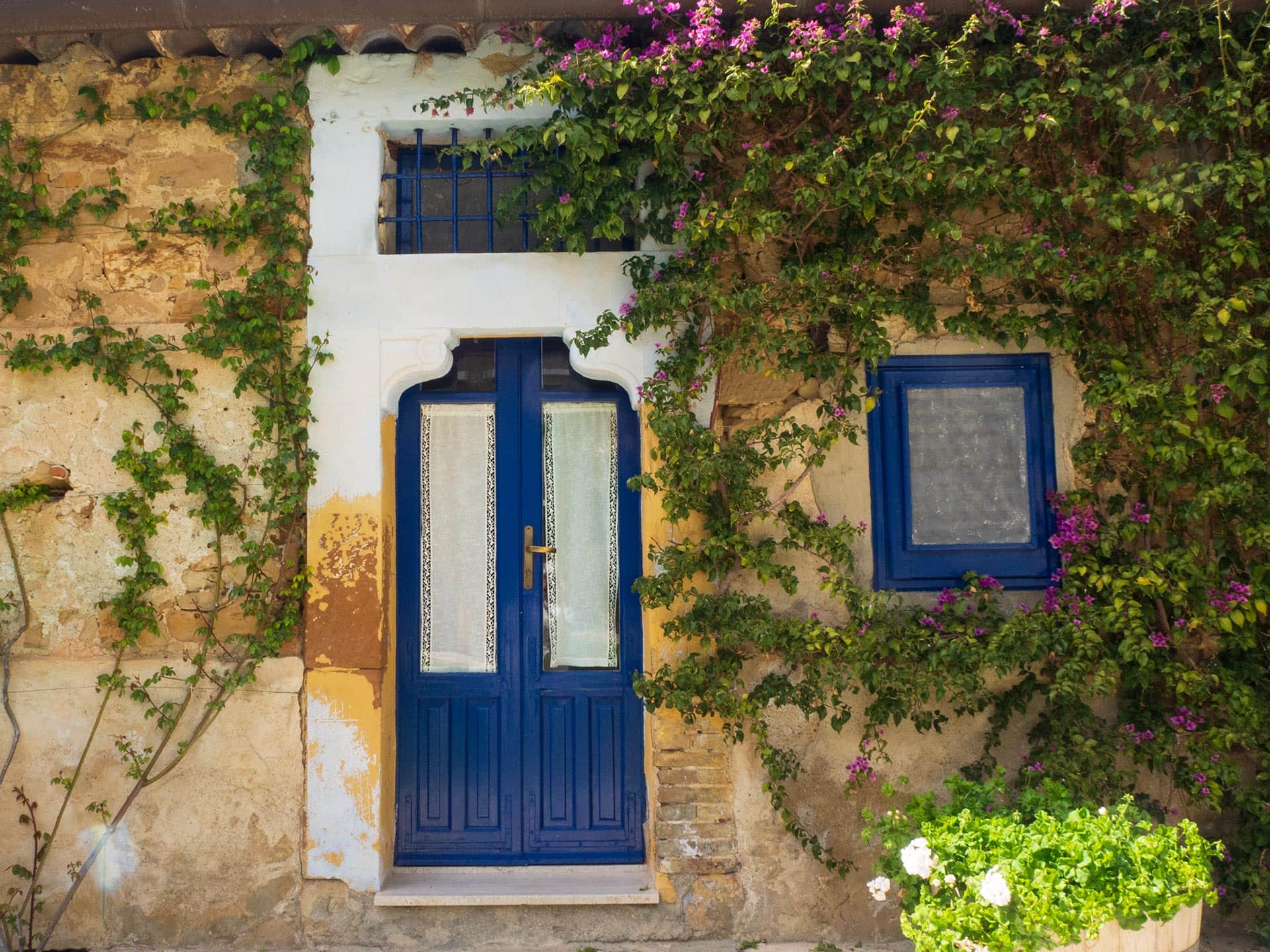 The door to our room 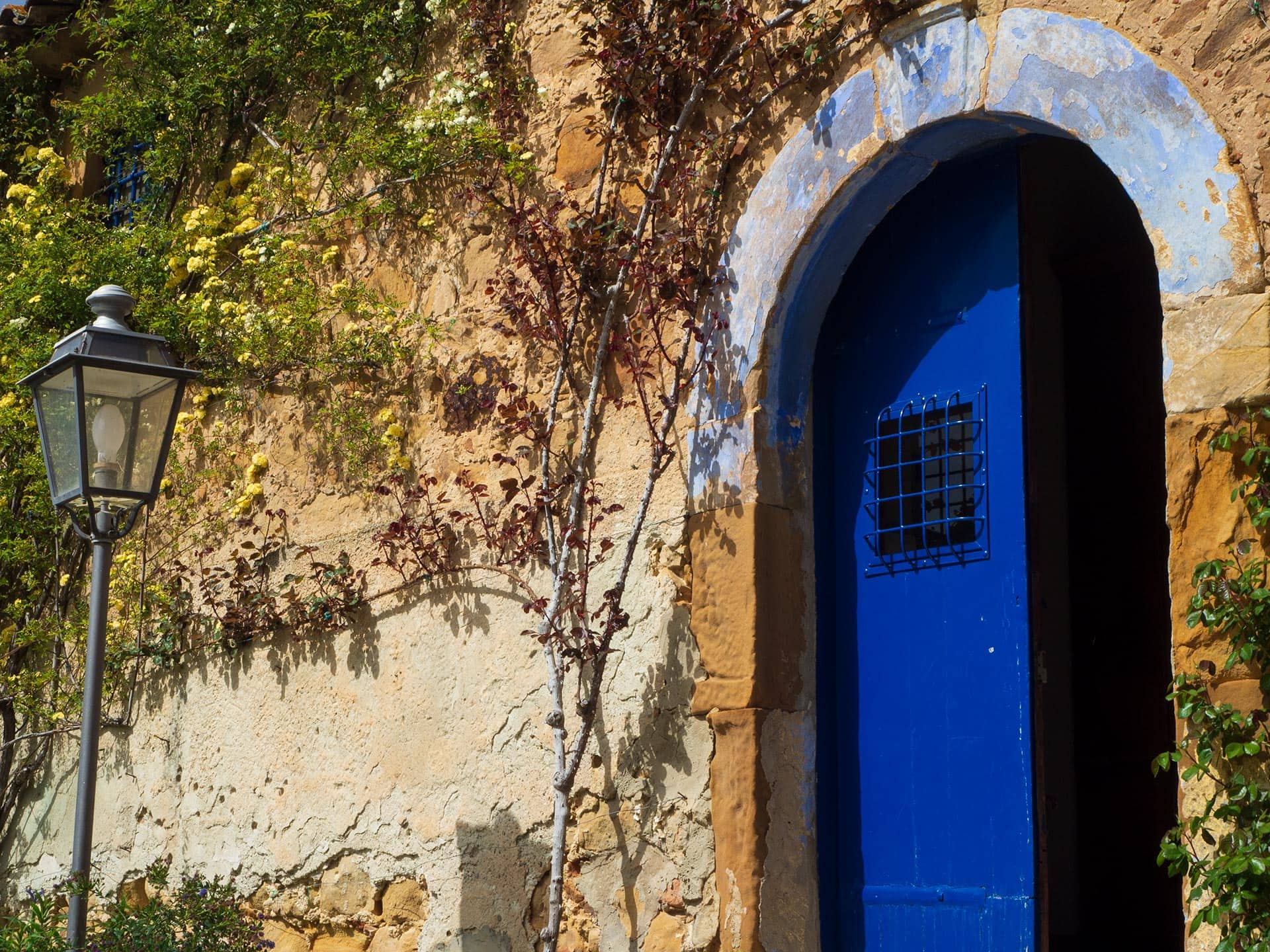 On a map of Sicily, Tasca d’Almerita (which Tasca Regaleali is sometimes called) is just above the heart. Way off the beaten road. I mean beaten, an hour on potholed roads deep enough to swallow a small car. But Magellan was loving it. “I wonder if these people didn’t pay their pizzu,” he said, steering around another asphalt crater. And then the road smooths, and above, spread out over four hills, is Tasca d’Almerita.

Initially, the only sign of modernity at Tasca is the funky check-in/gift shop at the entrance, which is where we met Lauren.The courtyard lawn is chalked with little, white chamomile flowers shaded by a large, old magnolia tree. And while the rooms were updated sometime in the last century, don’t expect glass shower enclosures or Acca Pacca toiletries. If you’re the only guests and the first ones of the season like us, you’ll get the nicest room, which is spacious, charming and comfy, the sheets so starched you feel they might crack when you fold them back to crawl into bed.

Over our two-day stay, Matteo and Lauren told us about the history of Tasca, now in its eighth generation of family winemakers.

In 1830 when the brothers Lucio and Carmelo Mastrogiovanni Tasca bought the property, wheat was the main crop. In 1854, Lucio and Carmelo were awarded the Sicilian prize “model farm.” It wasn’t until 1871 that they won their first wine award. Until the early 1980s, there were few wineries to speak of in Sicily except for the Duca di Salaparuta and the family estate wines of Tasca d’Almerita.

What is ultra modern are the wine facilities and the family’s innovative viticulture practices. Tasca was the first wine estate in Sicily to be certified with Viva’s SOStainability—SOS for Save Our Souls. Matteo pointed out the fava bean plants growing between rows of grapes and explained how they add nitrogen to the soil, a more ecological alternative to an assortment of non-heavy metals that were previously used. The SOStainablity award also recognized the family’s human resources and community enrichment practices. On an island where unemployment is 35%, a lot of local families derive their economic wellbeing at Tasca. (Its current CEO started out as a worker in the fields.) Another unexpected contradiction: Tasca’s SOStainability booklet communicates artfully and clearly with crayon-box colours and lively illustrations: 549 hectares, 113 sheep, 4,500 olive trees, 2 ancient wheat varieties… 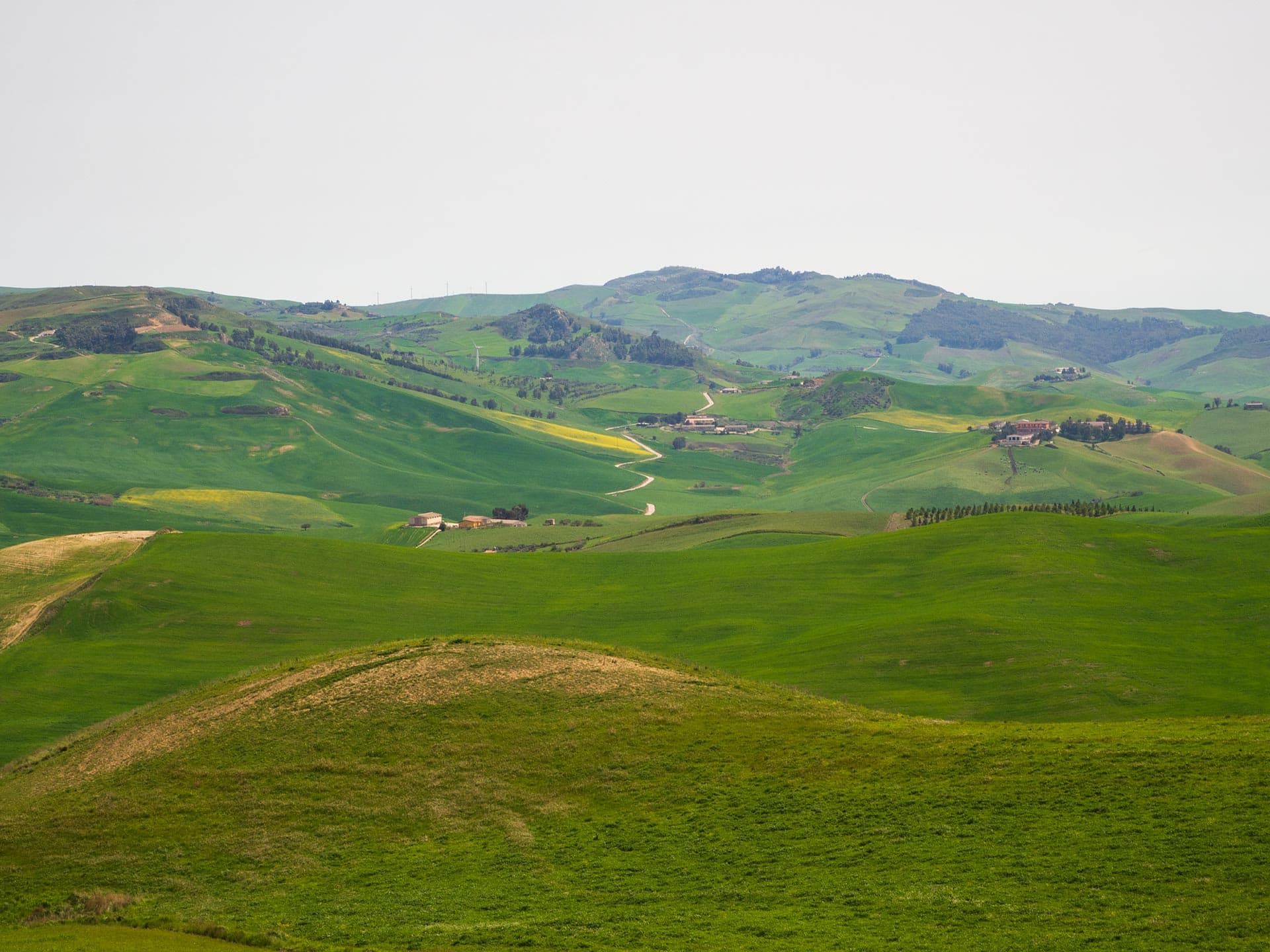 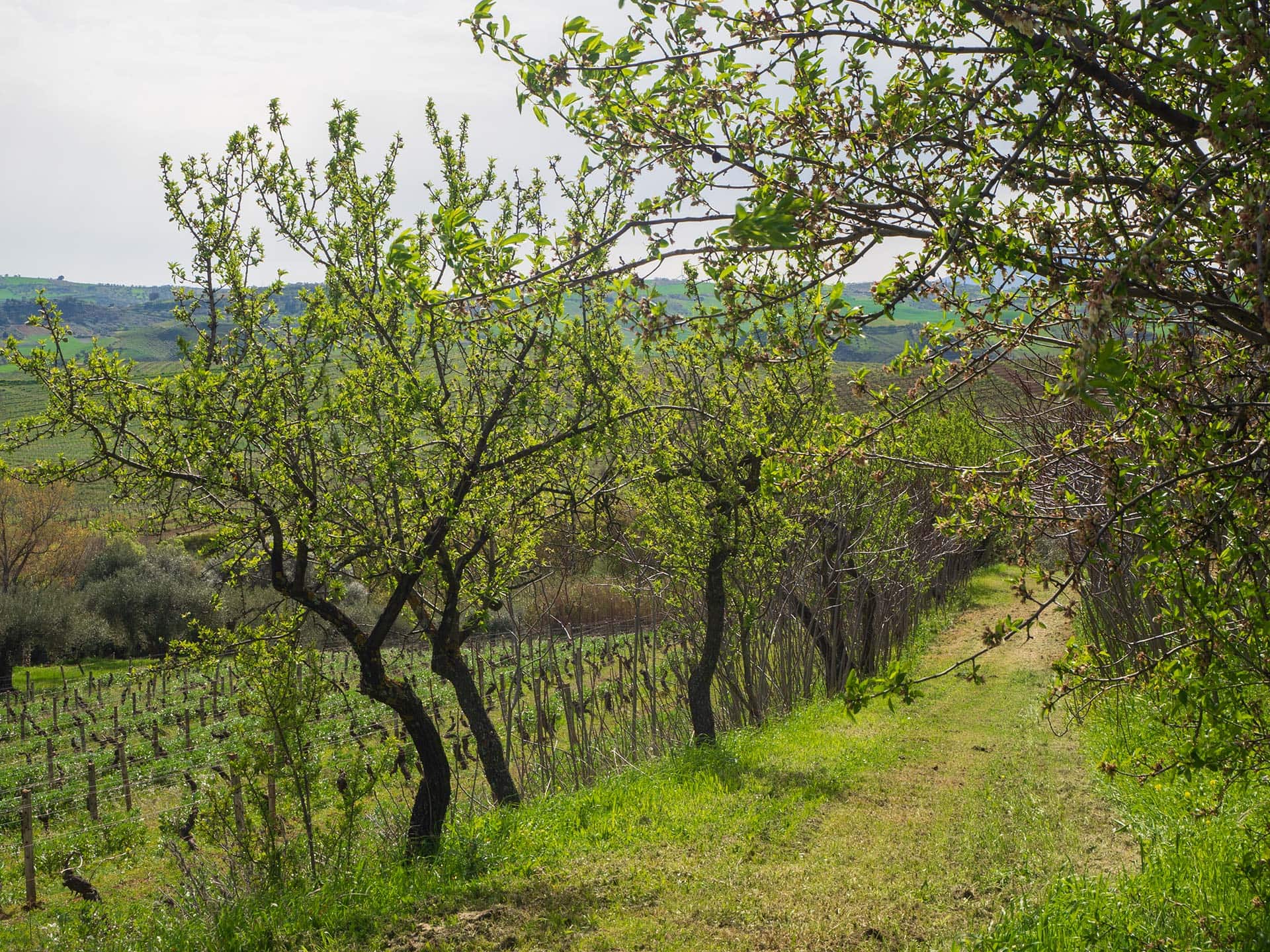 A recommended walking route through the vineyard 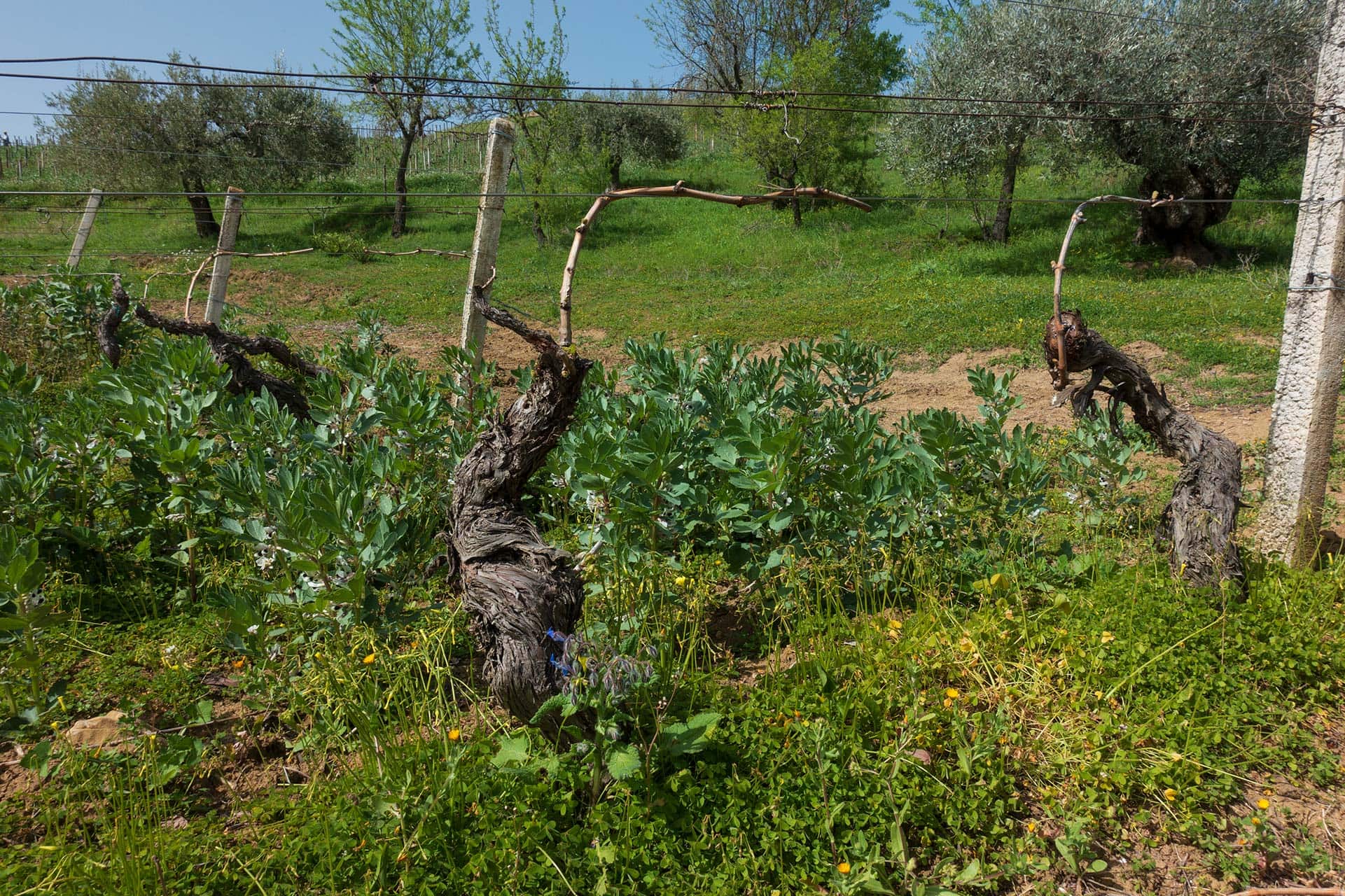 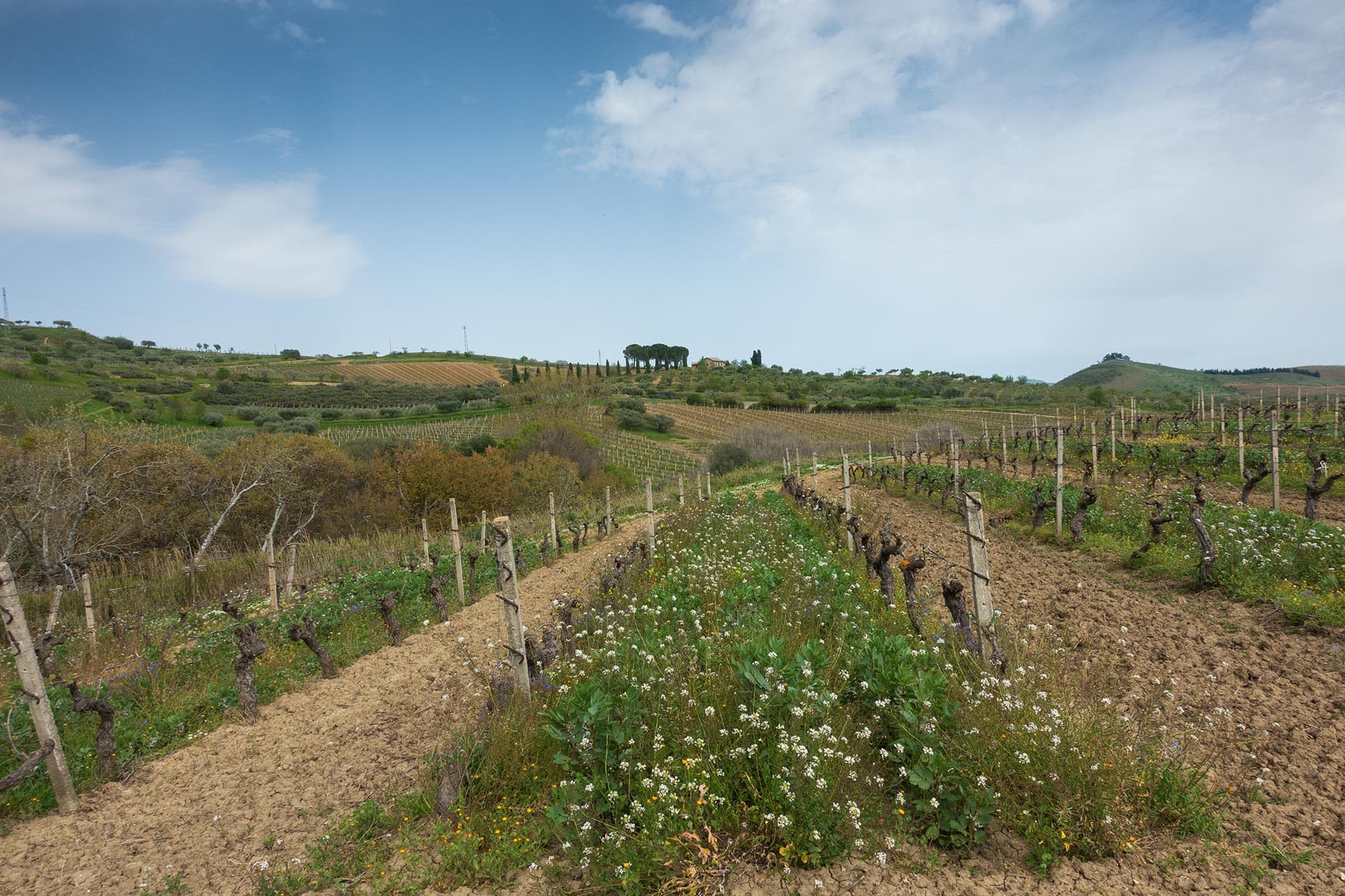 My favourite Tasca story is about Guiseppi and Franca, which Matteo told us about in a stately room of aristocratic elegance where we had a pre-dinner glass of wine, the first of many.

A dreamer, Count Guiseppi spent most of his time in the 1960s thinking about wine and how to improve its quality and was quite oblivious to selling it. Not so his wife Contessa Franca, the daughter of a merchant. “We’re going bankrupt!” she kept telling Guiseppi as she looked at the accounts. When he continued to be nonchalant about their balance sheet, the Contessa took things into her own hands, two telephones as it turned out. Everyday, she sat at the doors of the estate overlooking the vineyards with two phones on the go as she promoted the estate’s wine.

Guiseppi had travelled to vineyards in France but he was in no hurry to plant different varieties of grapes that had made French wine so revered. His son Lucio was more like his mother. In 1984, Lucio secretly planted four rows of French grapes, Cabernet Sauvignon, Chardonnay, Pinot Noir and Sauvignon Blanc. “When Guiseppi discovered what Lucio had done, he didn’t speak to his son for a week,” Matteo told us.

You can guess how the story ended. Tasca now produces four million bottles of wine from twenty-two different grapes and is experimenting with dozens of other varieties. About 40% of their wines are consumed in Sicily, most of the rest in Italy. This original estate is just one of a handful they now own in Sicily. 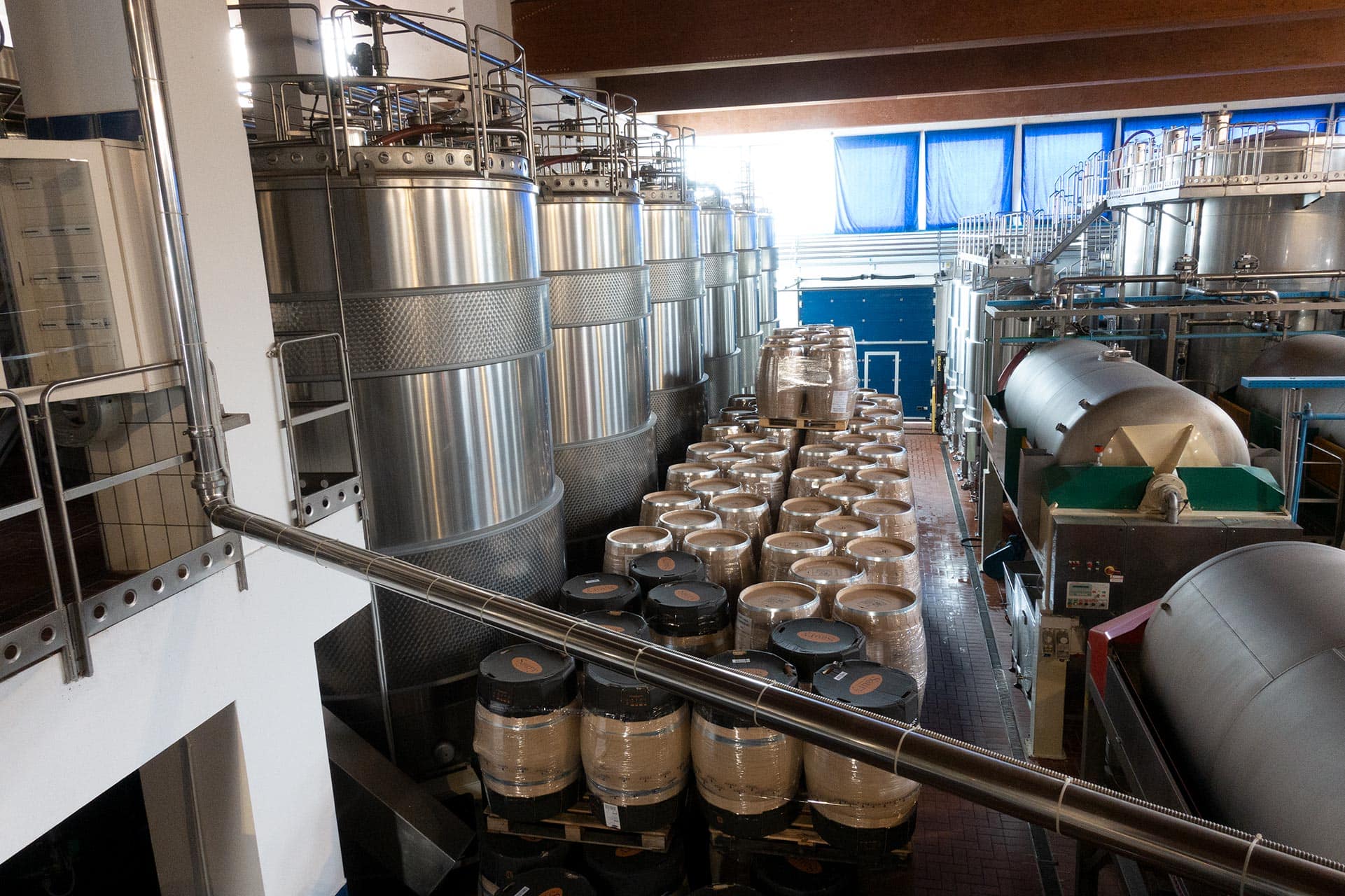 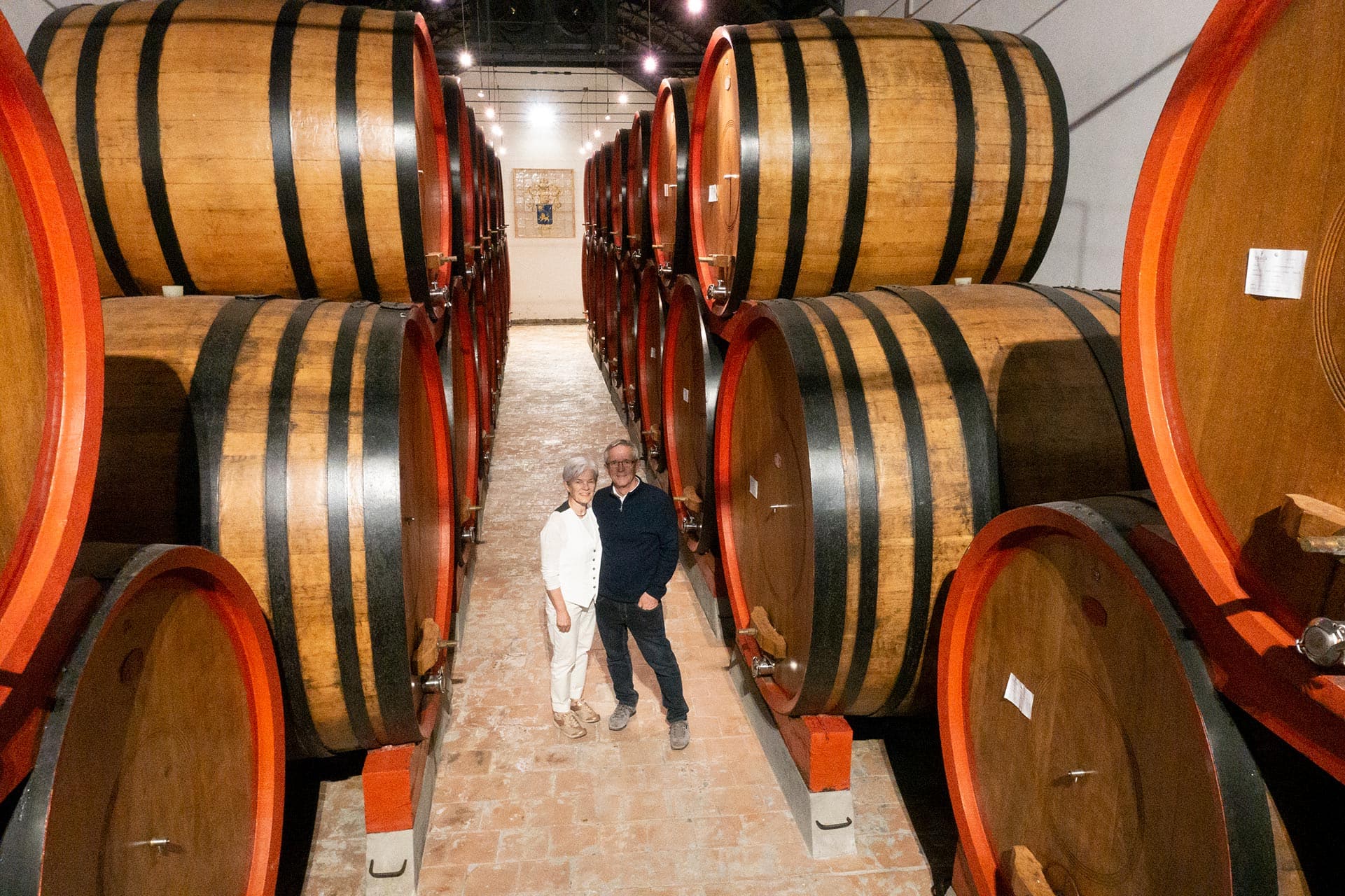 Enough wine to last us a lifetime
(Photo: Lauren) 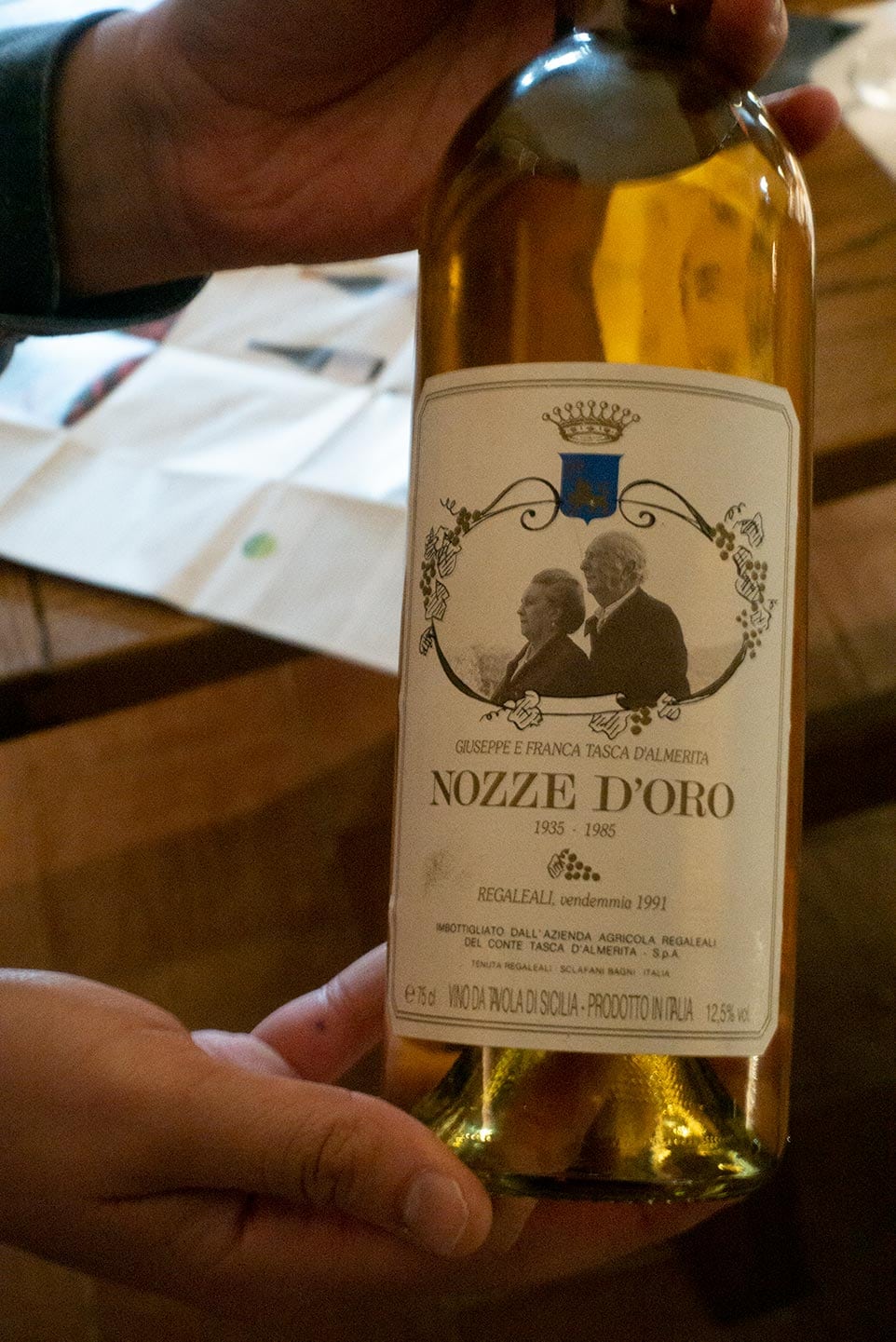 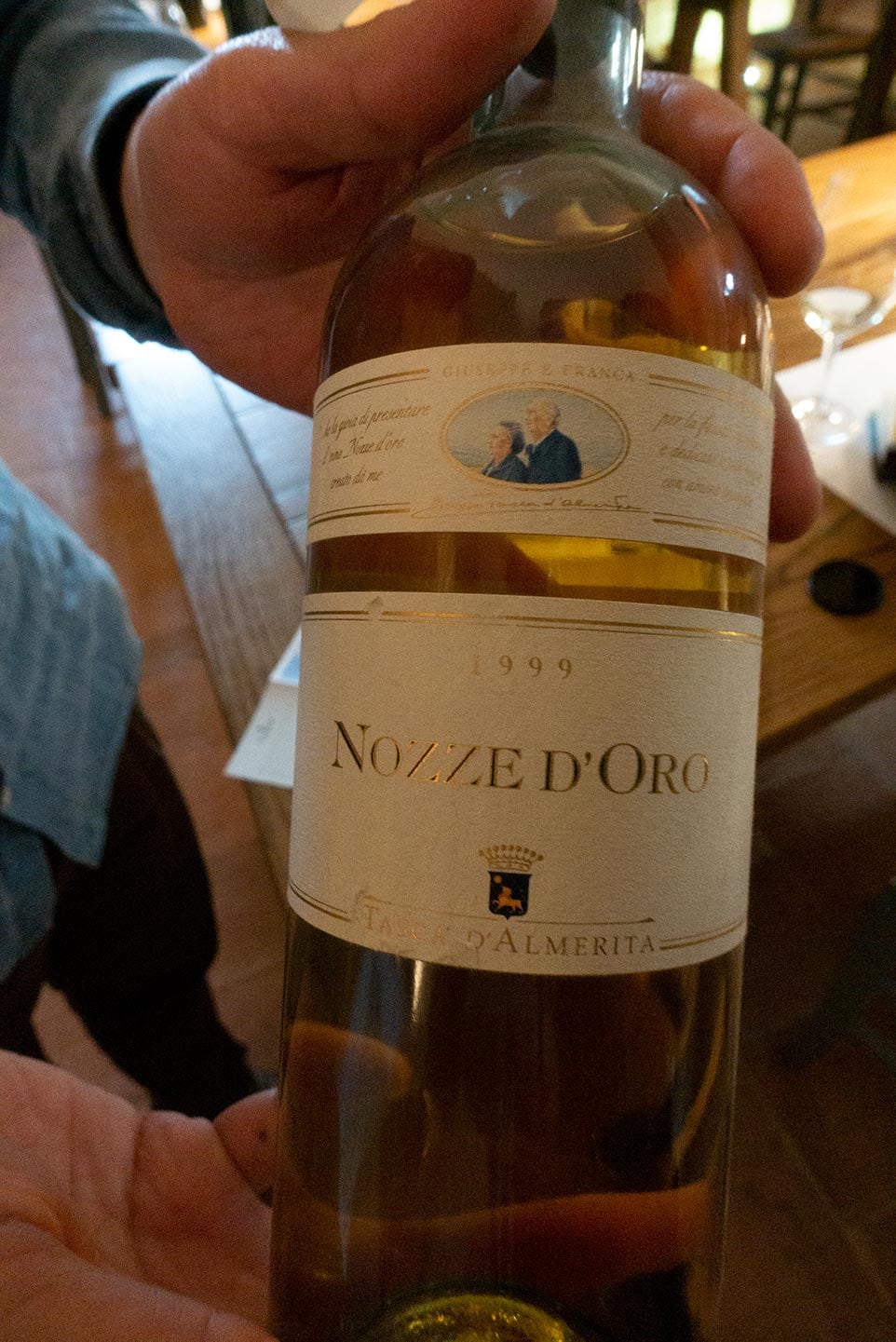 But back to Guiseppi and Franca. For their fiftieth wedding anniversary, Guiseppi created Nozze d’Oro and for their sixtieth, Diamante in a gorgeously designed bottle.

In the high-ceilinged drawing room, Matteo and Lauren told us more stories as we ate traditional Sicilian appetizers. Deep-fried puffs of panelle (crispy chickpea fritters), frittelle (rice croquettes) and zucchini batons, all liberally sprinkled with sea salt and homemade by Maria, the cook who has been serving dinners to the Tasca family and guests for years. The Anna Tasca Lanza cooking school, the first of its kind in Sicily,  is on the property about a kilometre away and is under the care of Anna’s daughter Fabrizia. Years ago, my sister Joyce gave me Anna’s cookbook, a treasure of Sicilian stories and recipes. Just thinking about it makes me want to make the eggplant pasta torte. (We went to the cooking school the next day, where I bought a very small jar of Estratto di pomodoro. Sicilian gold. To make it, you seed tomatoes by hand and then cook them in cauldrons over an open fire for an hour, constantly stirring to avoid burning. Then you salt the tomatoes, cover and leave  them overnight. The next day you strain off any liquid, spread the paste on cloth-covered tables and leave it in the sun for a few days until it’s thick as clay. Then you oil your hands and knead the concentrated tomato paste a little before conserving it. Estratto di pomodoro is so precious that I’m still waiting for the perfect occasion to open my tomato gold…) 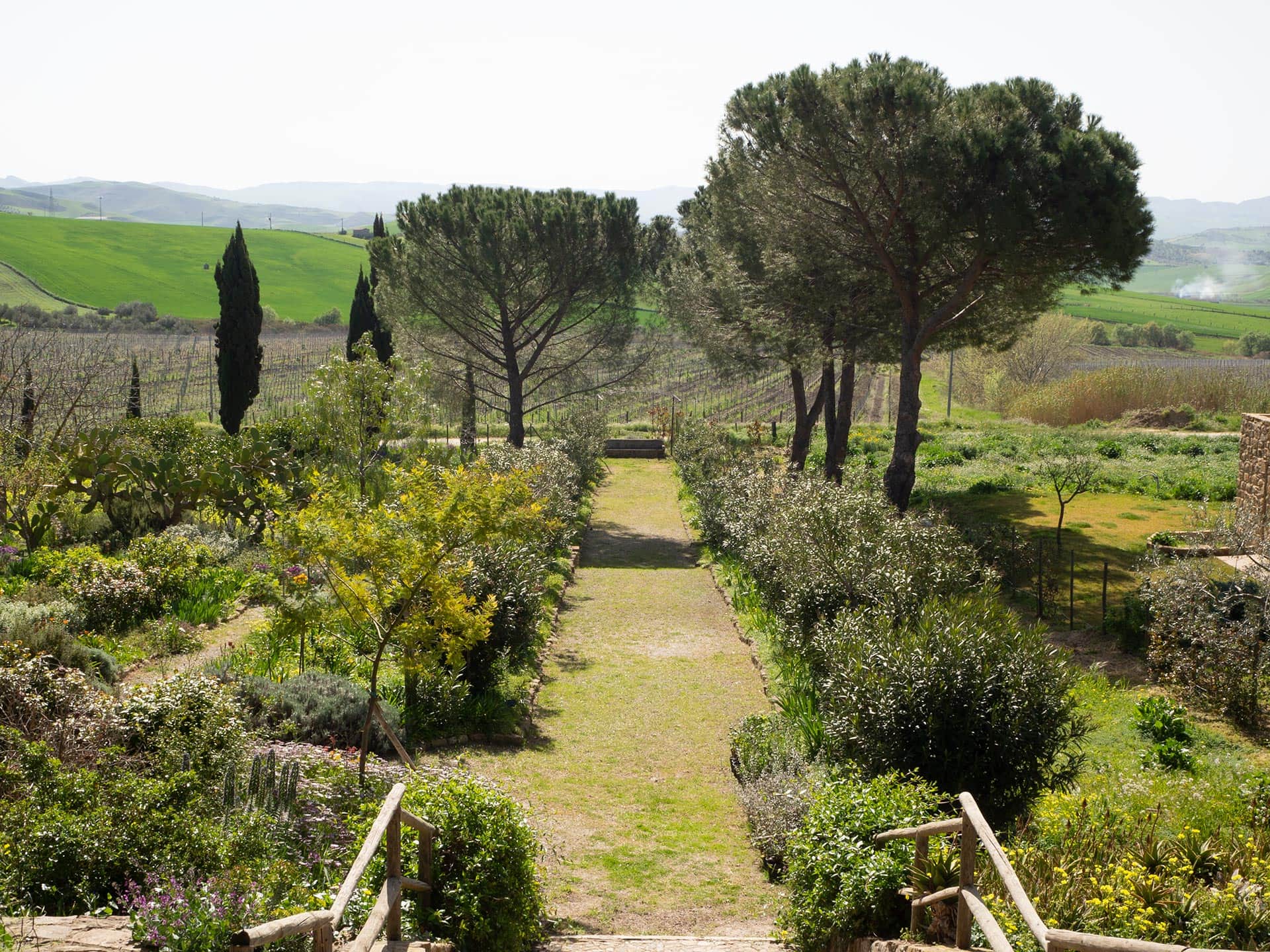 The garden by the cooking school 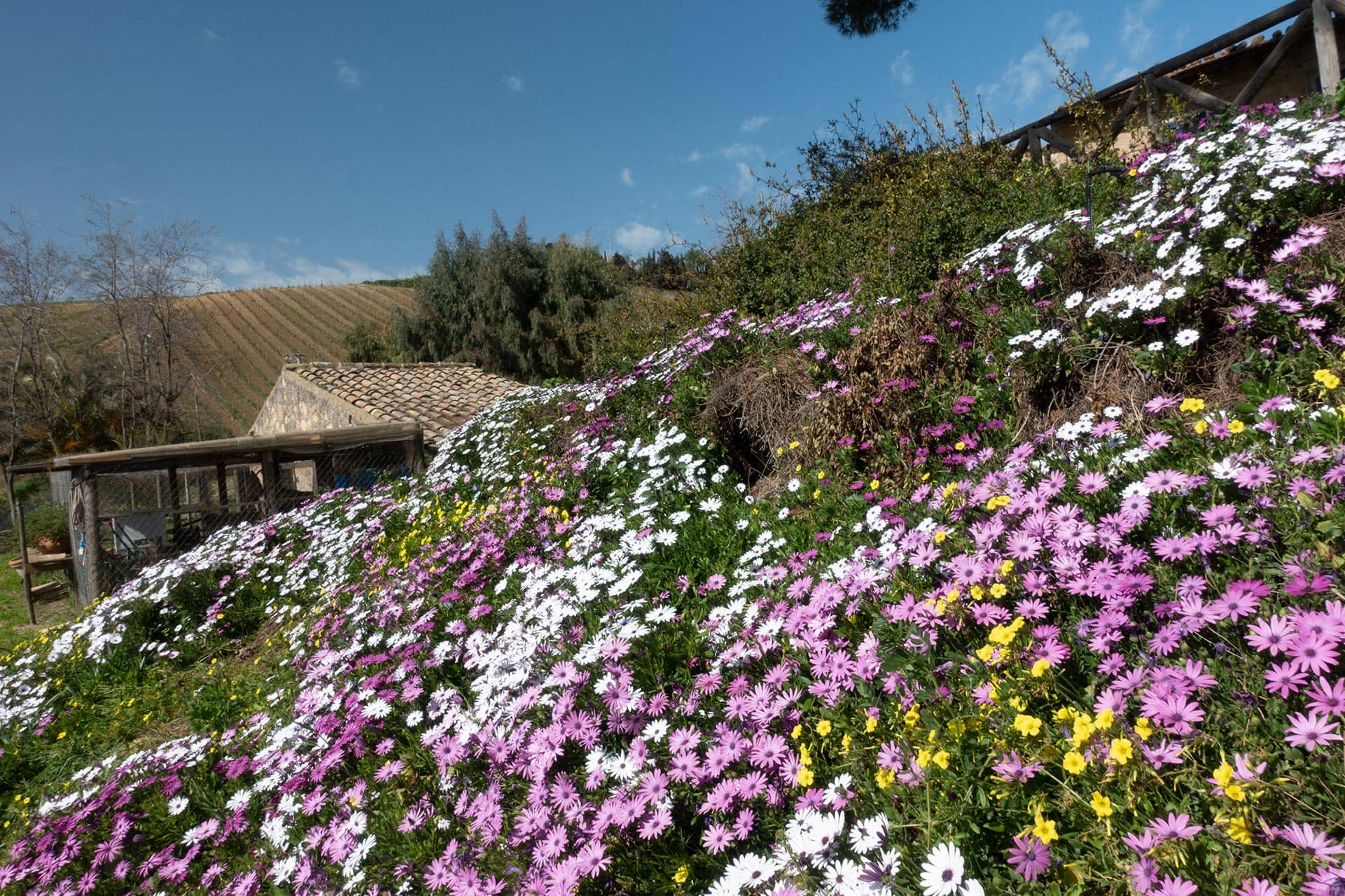 Bouquets-in-waiting for the springtime table 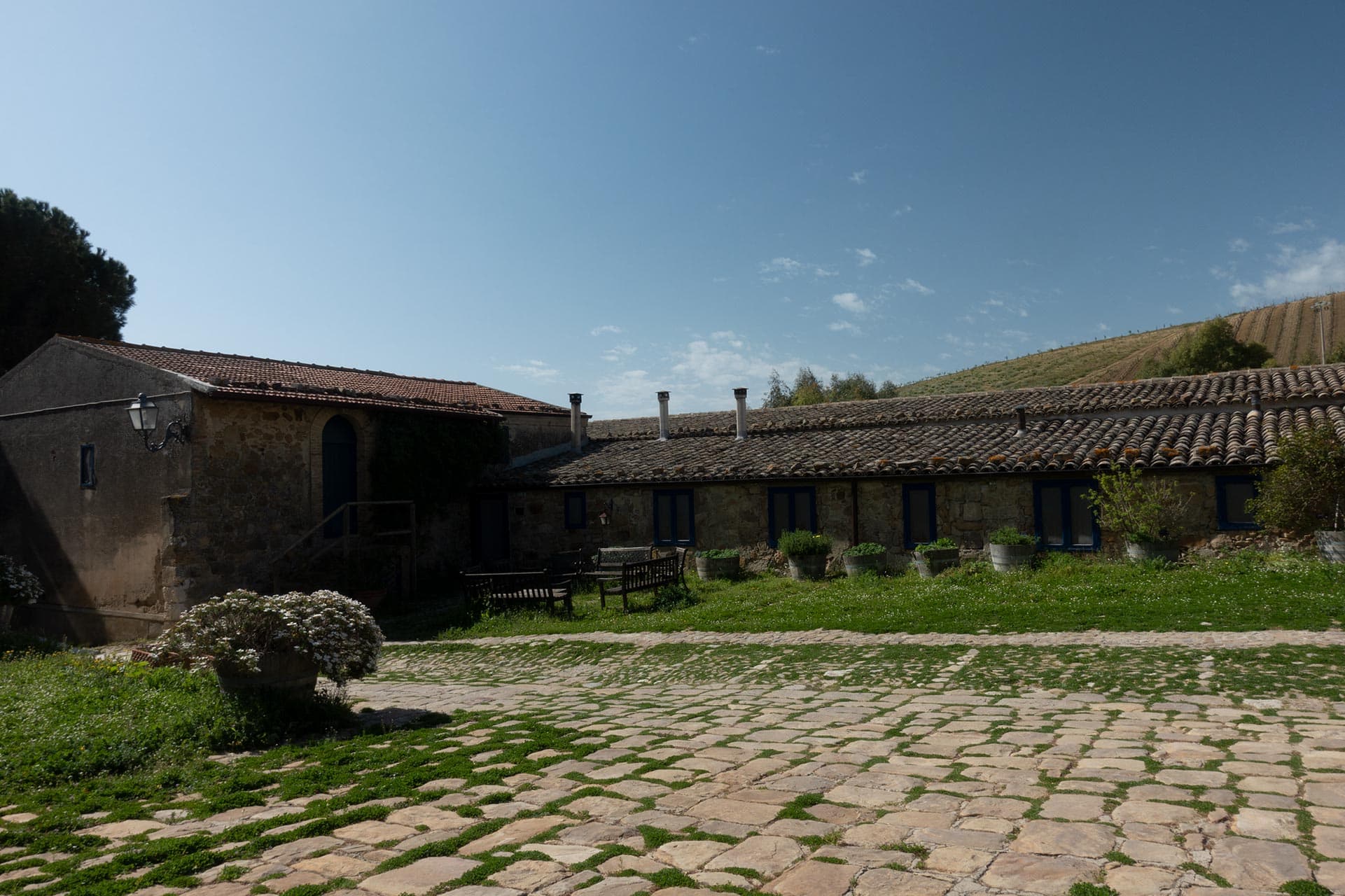 The silence that lives in the stone 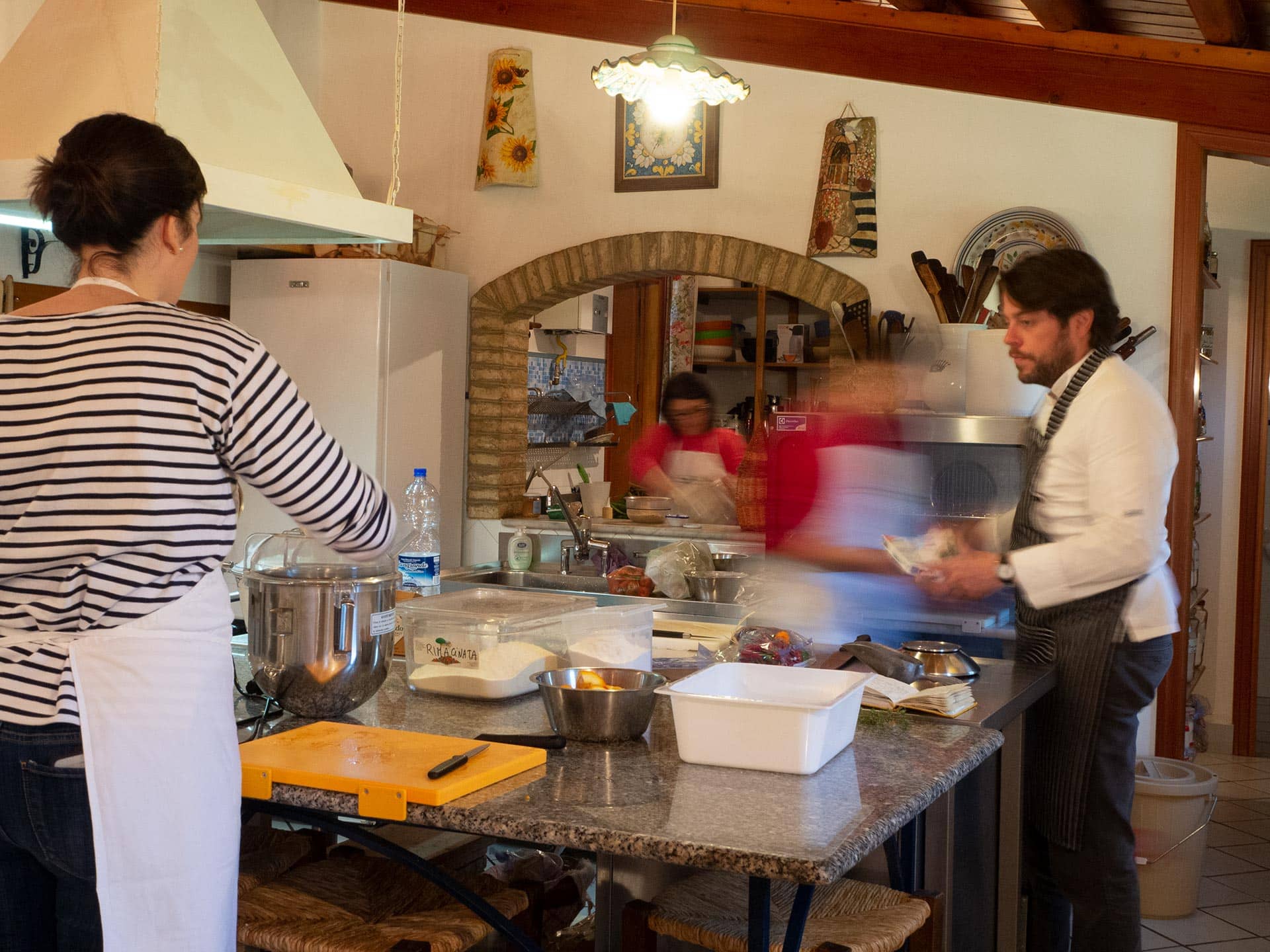 Now back to Magellan and me, seated alone in the dining room where an extended family of thirty Tascas could easily have been seated. “Let’s ask Matteo and Lauren to join us,” Magellan said. “They have to eat and it would be fun.” 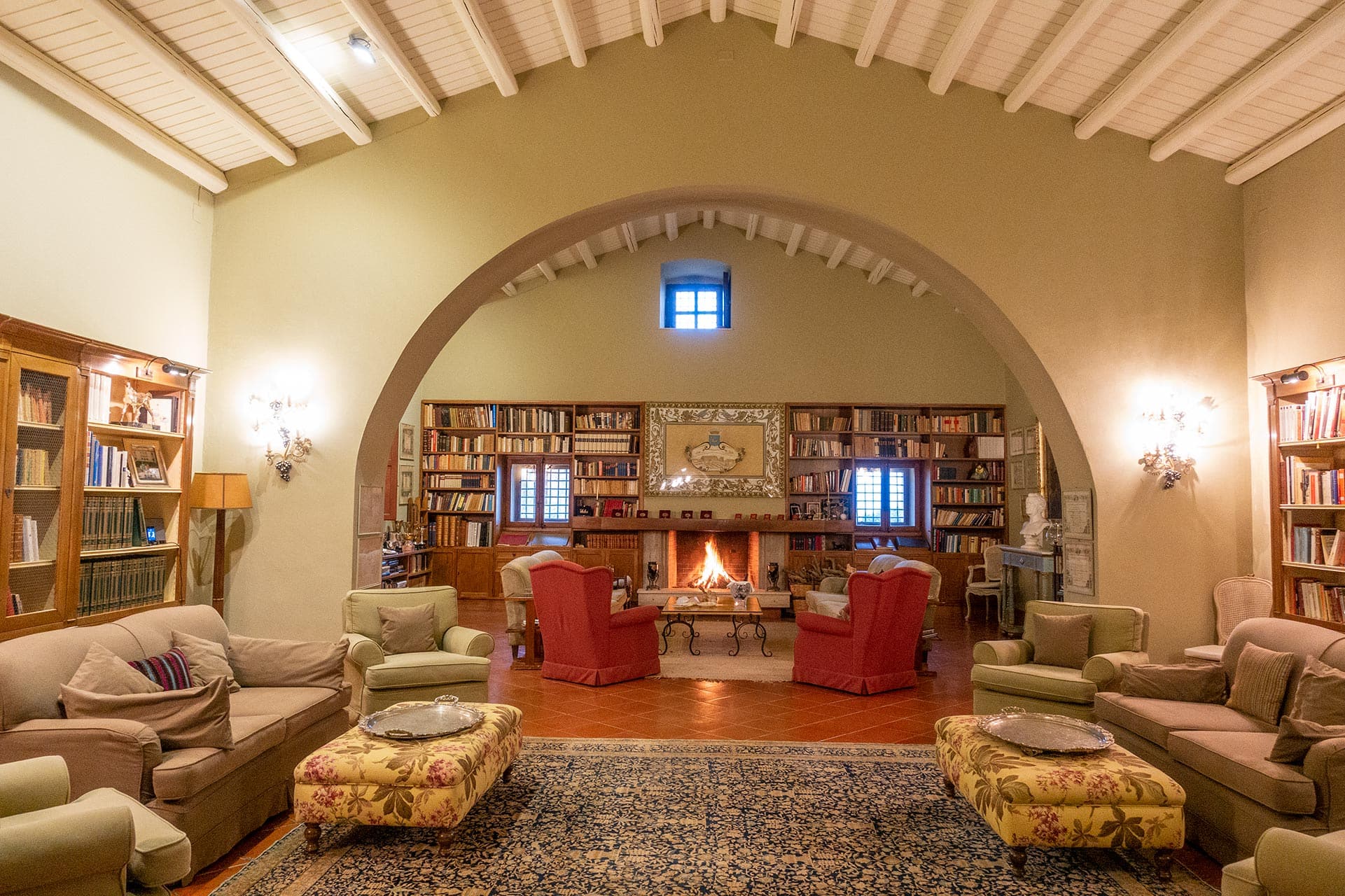 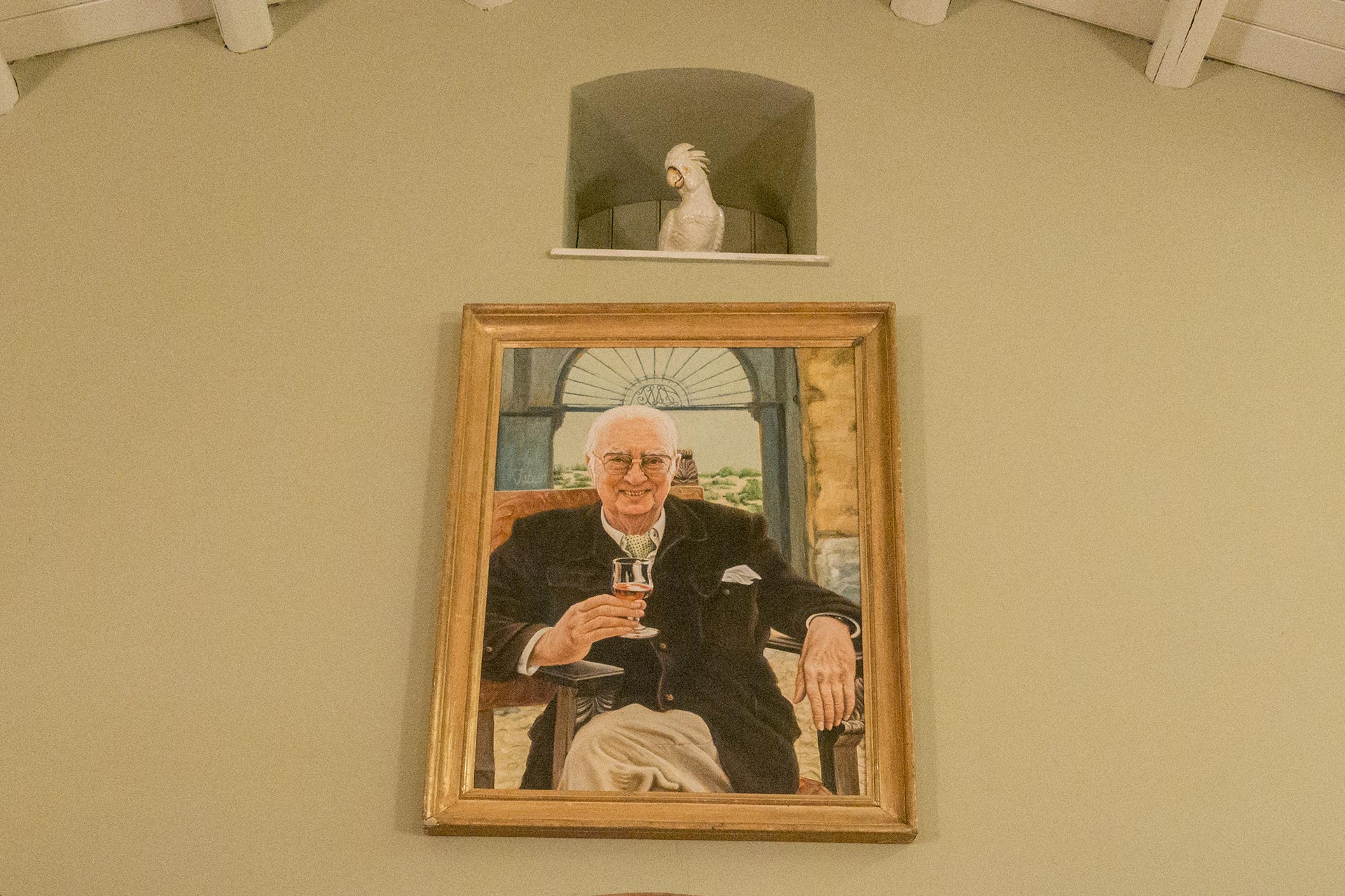 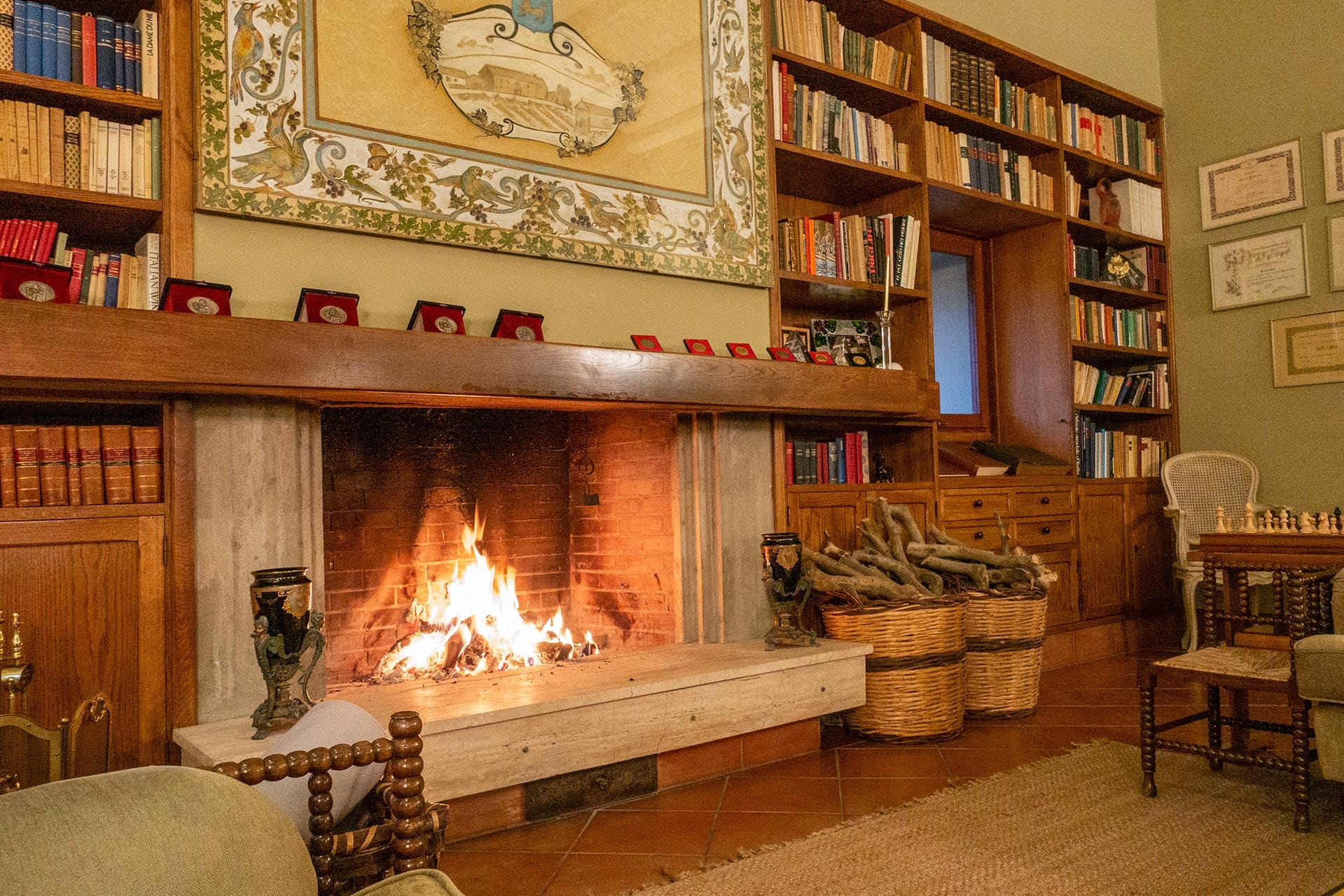 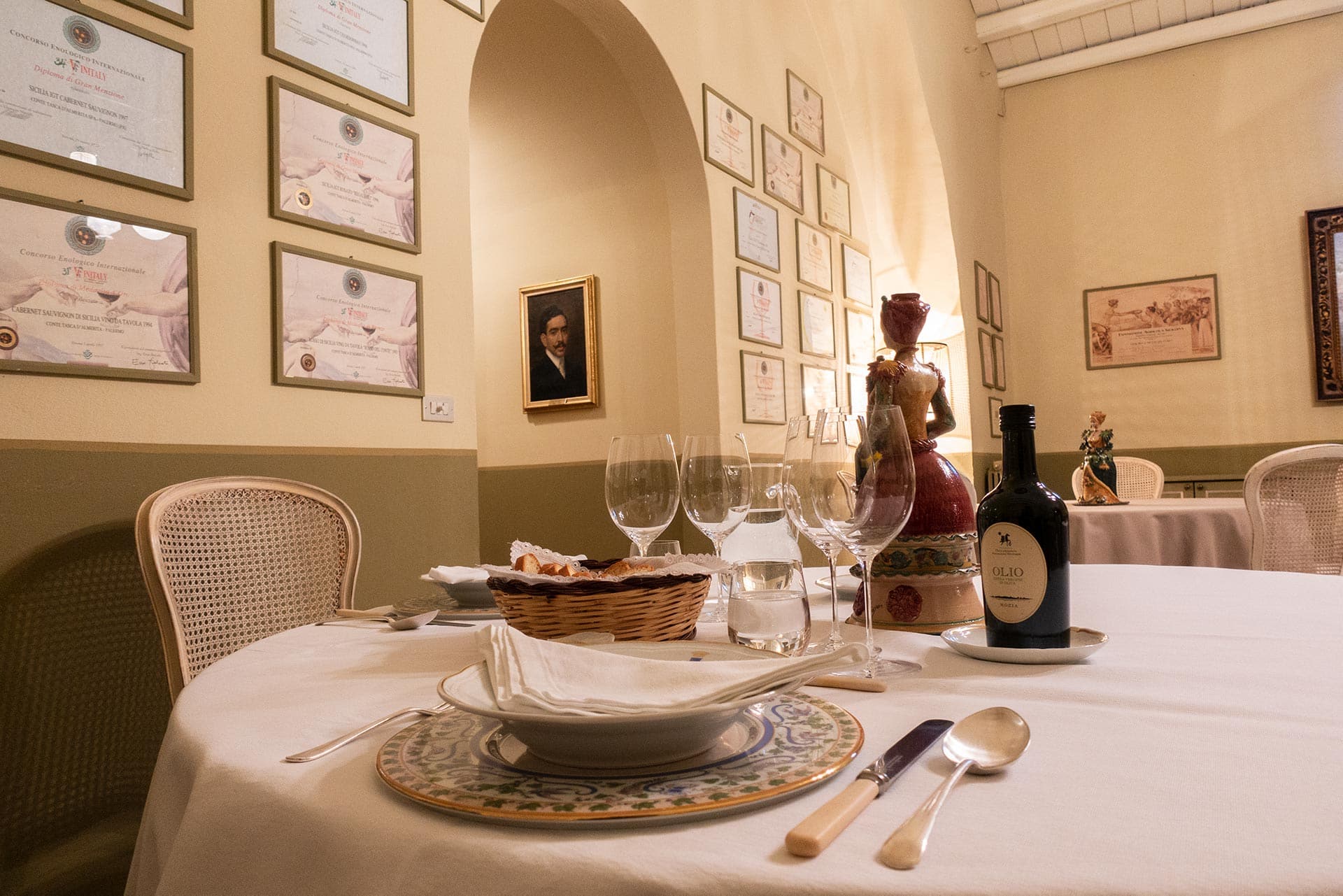 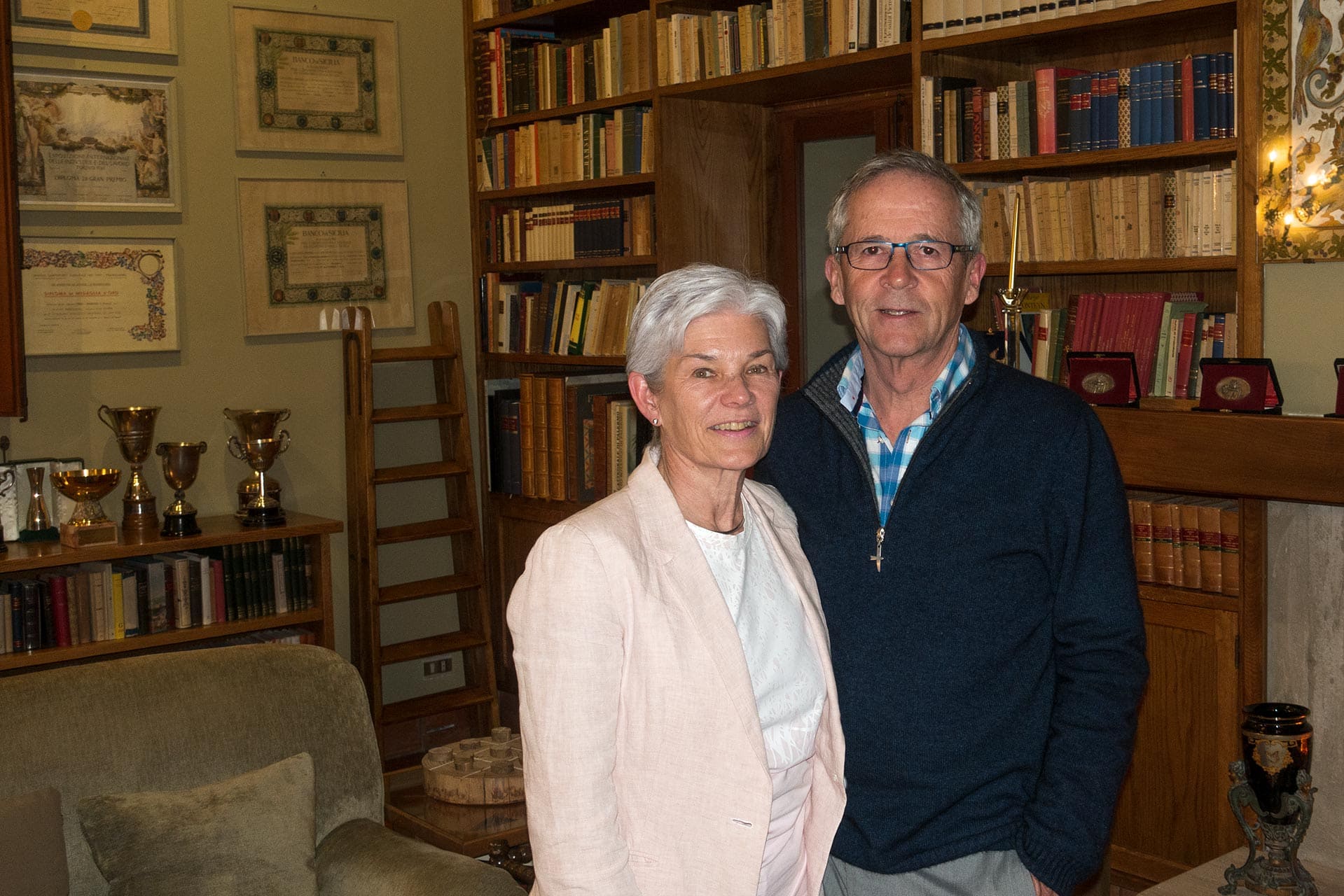 Dinner was old-fashioned. Veal involotine, potatoes, artichoke caponata and for dessert, profiteroles served with a glass of Diamante. The intergenerational conversation centred on us questioning Matteo and Lauren about how they met, prospects for youth in Italy, the Costa Nostra, the Five Star Movement (they’re very poorly educated and hold 32% of the power), the EU (Italians don’t mind the EU’s overspending but do object to the rule stating a country is responsible for providing asylum to immigrants landing there—geographically unfair compared to Ireland, unfair tax havens in Luxembourg, the Netherlands) and Tasca’s wines—which were spectacular…My favourite was the Catarratto Antisa with its bouquet of white flowers, freshness and hint of grapefruit.

In the quiet of our grandfatherly room, windows open to the blithe April air, we slept in complete antisa. Until the silence was interrupted by early morning birdsong.

For more info on the winery and its rooms, go to Tasca d’Almerita. To see Tasca’s SOStainability report (in Italian) click here. For the cooking school go here.

An Invitation to Roman Splendour

Chaco: Lining Up for the Solstice
Scroll to top