We promised you recipes, right? Our first one is associated with a trip we often take on Saturday mornings. A short one. Just across town to the Trout Lake Farmers’ Market.

For our first recipe, our criteria were that it be:

Along with the three Ms of Italian cooking—Caterina de’ Medici, Marcella Hazan and Mario Batali—there’s another name I’d add to the list, Giuliano Bugialli. Born and raised in Florence, he won Italy’s prestigious Caterina de’ Medici award in 1980 for his contribution to Italian cooking. I’d never heard his name until under the Christmas tree in 1985 there it was on the cover of the first cookbook Magellan gave me, Giuliano Bugialli’s Foods of ITALY. Remember how extravagantly beautiful cookbooks were in those days? This one has a large format, grand full-page photos on clay-rich paper (it was printed in Japan) and at least half-a-dozen recipes that are household favourites.

My favourite fruit, the “love apple.” And with the intense heat this year, they’re ready early and our favourite vendor “Milan the Tomato Man” has had Saturdays with no ration on his Sungolds at the Trout Lake Market!

For years, Milan Djordevich, owner of Stoney Paradise farm southeast of Kelowna, has been taking his tomatoes (and other produce like skinny French green beans, garlic and flavourful grapes) on a 4½-hour trip to Vancouver’s farmers’ markets and best restaurants. I remember the day Milan brought pictures of his newly born daughter to the market; now she’s a teenager. “I got top marks in math, dad,” she reminded Milan when he questioned her addition as Magellan handed over a wad of bills. Stoney Paradise, high on a bench overlooking Lake Djordjevich, was developed by his parents and has been certified organic since 1997. Before he took it over, Milan trained as an architect and several years back, he tried film school for a break. Thank goodness, he returned to his roots.

His wit is as bright as his Cascade tomatoes that we use for this recipe. A few weeks ago, the customer lineup at Milan’s stall was so long at the opening bell that I left tomato buying until the last. My cash reduced, I had to calculate what combination of tomatoes I could buy. “Because of you I’m down to my last loonie,” I said to Milan. “It’s a service I like to provide,” he said, flashing his mischievous grin.

Firm orbs of crimson, Milan’s Cascades tomatoes are the size of big Red Heart plums. Their sugar- to-acid ratio balances perfectly. He says the ones in September are “firmer and I think, better. They’re really hard when I get to use them in November,” a reminder of the long, hard hours a farmer toils.

Even on rainy Saturdays, there's a lineup at Milan's Stoney Paradise stall

Tomatoes with a slice of Milan's humour

The sweetest tomatoes you will ever eat—Milan's Sungolds

Giuliano calls for a stove-top tomato sauce made with fresh tomatoes. But my preference is to slow roast Milan’s Cascades, deepening and caramelizing their natural sweetness. It’s as easy as making a sauce and you won’t have seeds and skins if you put your roasted tomatoes through a food mill—one of my favourite kitchen appliances. The only drawback is slow roasting tomatoes is, you guessed it—a slow, three-hour process you need to plan for. However, as a drawback it’s minor as it can be done days in advance.

We increase the original recipe’s amount of tomato sauce by 50%, add more basil leaves, grate the mozzarella and Magellan has his own method for layering the pasta.

Save Print
Prep time
75 mins
Cook time
25 mins
Total time
1 hour 40 mins
Slow roasting the tomatoes takes three hours so allow time for that or alternatively, do this step a few days in advance, or make the sauce when garden tomatoes are in season and freeze for later use. A food mill is a valuable kitchen tool for processing the roasted tomatoes as it eliminates seeds and skins in the sauce. You will also need a pasta machine, the old-fashioned hand-crank version works well.
Author: Spice
Recipe type: Pasta
Cuisine: Italian
Serves: 8
Ingredients
For the Tomato Sauce
For Magellan’s Home-Made Spinach Pasta (Giuliano’s exact recipe)
For the Ricotta Stuffing
For the Mozzarella
Plus
Instructions
For the Tomato Sauce
For Magellan’s Home-Made Spinach Pasta
For the Ricotta Stuffing
To Assemble and Bake
3.5.3251

This 30-year-old cookbook is still available 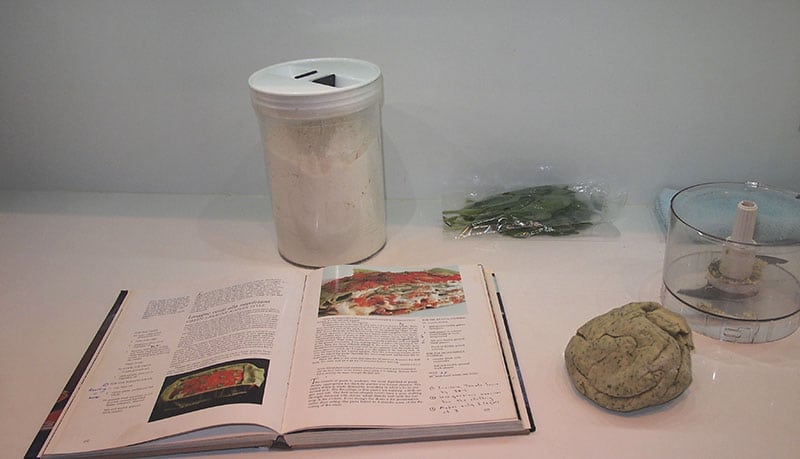 If we had to choose Casa Spice and Magellan's signature dish, it would be Lasagna Verdi alla Napoletana

The spinach pasta here is chubby—probably at the #3 setting—Magellan rolls it to #7, the thinnest setting

By increasing the number of basil leaves to 24 from 20, each serving gets equal rights

When serving this lasagna at Casa Magellan and Spice, we like to start with an appie of fennel sausage sliced thin and oven baked (to crisp it) alongside plump green olives and a crusty bread lightly toasted on the grill. We follow the lasagna with a green salad and end with a fruit-forward dessert, like the poached peach and almond tart in Cooking for Mr Latte by Amanda Hesser, co-founder of Food 52.

Having grown up on a farm in Saskatchewan with a mother who canned, pickled, froze and baked and at 86 still works three garden plots, and a farm-and-garden-to-table grandmother whose home cooking was so renowned she had drop-ins every day, I’m grateful to farmers like Milan who are unearthing produce with real taste and delivering it with panache.

UPDATE: Giuliano died on April 26, 2019. Here’s an obit from the New York Times about his life.

Check out Giuliano’s other books and the cooking classes he offers in a fifteenth-century farmhouse in Tuscany.

Milan Djordevich What can I say? In Japan, he might be considered a National Treasure.

My Quest for the Spirit of Haida Gwaii
5 replies

In the Back Seat on the Massage Roads of Bhutan, Protected
Scroll to top