Hyakken-gura, how can he turn his back to this?

When I looked again at the map for the Kogumotori-goe section we walked on our third day of the Kumano Kodo, how to write about our experience became as clear as the mountain streams we’d been crossing.

Our route was shown in reverse on the map—we had to follow it from right to left.

Journeys don’t follow straight lines. So, instead of following the path we travelled on Day Three, today’s story meanders among moments during our first three days of the Kumano Kodo, buzzing along from one pleasant remembrance to another.

Let’s start with Kumano Kodo maps, their detail as exquisite as Japanese wrapping. These maps indicate walking distance, walking time (with and without breaks) and an accompanying elevation chart. They include the locations of signed trail markers, interesting sites, monuments, shrines, toilets and “vendees” (vending machines: only one today and it’s in Koguchi, where we will sleep).

Speaking of exquisite, we haven’t told you about flowers on the Kumano Kodo. Luck-Sure-Be Travel, the name Magellan and I gave ourselves in organizing this trip, didn’t provide a guide to the flora of the Kumano Kodo. But look at what we saw.

Searching for the sweet spot at Yunomine Onsen 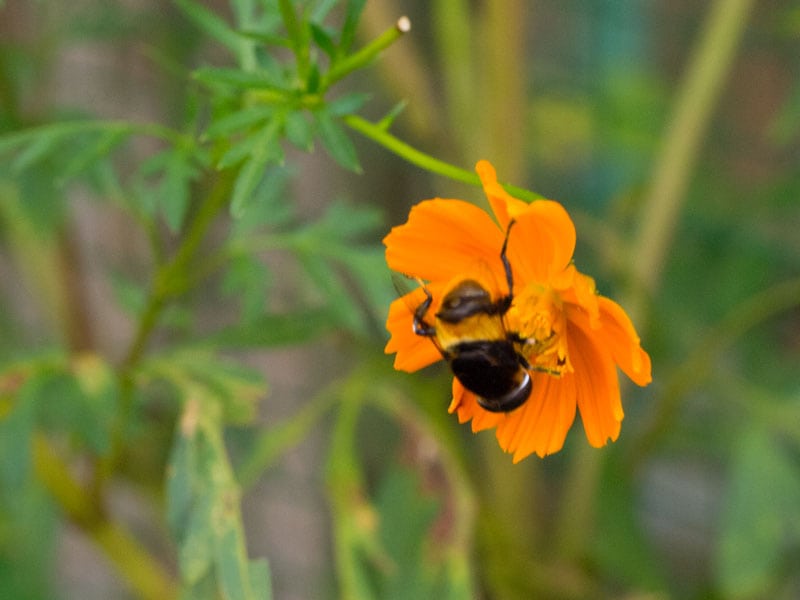 The Japanese, as you know, reserve a special affinity for cherry blossoms. However, autumn has now overtaken cherry blossom season as the busiest time of the year for tourism. Late October to early November is best to witness the richness of autumn colours on the Kumano Kodo. In mid-October, we had to settle for a single glimpse of orange foliage, rarity enhancing beauty.

Each day on the trail, I carried the gold, the red and the orange of autumn—the colours of a journal handmade by our artist friend, Pat. Many pilgrims carry a booklet in which they collect rubber-stamp marks depicting shrines and ojis along the Kumano Kodo trails. It was a very zen-like experience to unwrap the raffia tassel Pat had made for a closure and ink a stamp into my journal. Each of my stamps is like a miniature woodblock engraved in red on the journal’s washi paper.

See my stamp of the Hyakken-guru? This oji stands guard in front of the Kii mountain range with its 3,600 ridges and peaks. How do we know this? Excellent signage. For example, accompanying the Sai-no Kawara Jizo is a sign explaining that it consoles the souls of travellers who died during their pilgrimage.

"Jizo is a Bodhisattva, a being that compassionately refrains from entering nirvana in order to save others,and the protector of children and travelers. Sai-no-Kawara is the riverbank of purgatory of the mythical Sanzu-no-Kawa river, which separates this world from the after world. All souls must cross this river on their way to the afterlife. Young children have not accumulated enough karmic merit to pass on their own, so they pray for salvation by stacking pebbles.But their stacks are constantly washed away by evil demons. Jizo rescues these children by transporting them across the river in the sleeves of his robe."

Speaking on behalf of our intrepid group on the subject of signage, the chocolate-brown signs with their white lettering every 500 metres along the Kumano Kodo function as goals, motivators, milestones and rewards as wonderful as chocolate.

The only snake we saw

When Lynn was a little hiker in the Rocky Mountains of Alberta, we shamelessly bribed her with Cadbury’s Fruit and Nut bar. “After the next big corner you can have a piece of chocolate,” we’d say. Tucked into my suitcase for Japan, I packed 16 Ziploc bags, one each for every day on the Kumano Kodo. Each baggie had a handful of dried apricots, cashews and yogurt-covered almonds. And chocolate. (“What kind?” you wonder. Peanut Mallow Bites from Chocolate Arts “vanilla bean marshmallow, house-candied peanuts with milk chocolate & enrobed in 70% dark chocolate.” You’re welcome.)

I hope that chocolate sweetened my catalogue of daily blunders on the Kumano Kodo. After breakfast at Ryokan Adumaya, I saw four lunch bags at the front desk and wondered, after the superb dinner the night before, how I’d keep from opening mine to see what was inside. “Oh no, those are not for you,” said the kind young man in charge as I started to pick up the paper bags. “You didn’t order lunch.” WTH! Now what? “Can you make us lunch before we catch the 9:15 bus to Ukegawa?” I pleaded. (Ukegawa is small, about 100 people, and I feared there’d be no place to get lunch.) No, they could not. “There’s a store in Ukegawa across from the bus stop that has a restaurant attached,” he offered. But Yamazaki-Y Shop was closed that Wednesday. Luckily, a fish shop across the street sold very good rice balls, sushi, fruit (persimmons!) and assorted drinks.

Ah, rice balls. As Yata-garasu (the three-legged raven) is the insignia of the Kumano Kodo, Mehari Zushi (rice balls) are the culinary symbol of this walk. Often wrapped in takana (pickled mustard leaves that give a nice flavour and aroma and make them easy to pack and eat), rice balls may contain vegetables, fish, meat, seaweed, sesame seeds, pickled plums, pickled radish… Each one different, all delicious.

On the subject of rice. The Kii mountains aren’t conducive to rice-growing—we saw only one rice field, on the Koguchigawa River on Day Three. In ancient times, a fundamental component of the Kumano Kodo was a four-hour ferry trip from Ukegawa down the Kumano-gawa River instead of walking for two days as we did. The boats not only transported pilgrims, they carried cargo produced in the area, like lumber, charcoal and vegetables. As the audio guide on Kumano Travel’s website explains, on the return trip the ferries (powered by wind and muscle for two days) brought items the area didn’t produce, like salt, soya sauce, seafood—and rice.

In the Koguchi-gawa River a fisherman sets a seine, a net hanging vertically in the water, its bottom held down by weights, its top buoyed by floats

We ate our rice balls at the Sakura-jaya Teahouse remains, a few benches sheltered by a roof at the side of the trail among a canopy of cypress and cedar. A couple was just leaving. “Did you see many other people on the trail?” friends ask us. In Takijiri-oji at the Kumano Kodo office, Magellan inquired about the number of daily travellers. “About 100,” he was told. But that’s over four different routes and many trail diversions. We nodded at a group of three older Japanese couples on Day One but never saw them again. On Day Three we kept seeing a wiry Japanese man who had hiked from Koyasan on the very difficult Kobechi Trail. A young couple (he from Italy and she from Bulgaria as I recall) who had also stayed at Ryokan Adumaya would pass us and then we’d overtake them. It was busiest on the more accessible and popular portion near Hongu Taisha, but even there we saw no more than 10 other hikers. No one from North America.

Luxuriating in the warm weather, the sunshine, clear skies and open vistas, we lazed over lunch. Day Three was much easier, a 4/5 rating but only 13 kilometres to traverse. Today for the first time, there was no rush to get to our lodging before darkness fell. We settled into a more comfortable tempo. We paused a little longer at viewpoints, like one of the top 100 sunrise and sunset points in the Wakayama prefecture. Ward began to write trail-motivated haikus about rice balls, ravens and vendees. Coincidentally, this section is where we first saw “Poem Monuments,” poetry inscribed on stone, calligraphy we couldn’t comprehend that induced a feeling of comprehension.

A natural location for a poem monument

Along the trail, eight-hundred-year-old trees and younger men

Our first view of Koguchi

Tracing the footsteps of the past 1200 years

Vending machines, our shrines of liquidity, refreshed us. Japan has the highest per-capita rate of vending machines in the world. And there are enough roadways near the Kumano Kodo to service at least one per section on the Nakahechi route. For around 200 yen (about $2.25 Canadian), you can choose café au lait (the Georgia brand was pretty tasty), coffee hot (red sign) or cold, tea (hot or cold, milky or clear, green or black) or one of the wide assortment of cold drinks, many of them lemony like the Mountain Dew of yesteryear. Like CCC, the crazy vitamin drink I had in Koguchi that contains more vitamin C than 35 lemons!

Done with that can of CCC? Where will you put it? We almost forgot to tell you about another idiosyncrasy here—there are no garbage cans. When you think about it, it makes sense. While roads parallel some of the Nakahechi route, it’s too remote for regular garbage collection. You must pack your cans, bottles and lunch wrappings to where you’re staying for the night and deposit them there.

Koguchi is a tiny hamlet, its isolated beauty enhanced by the intersection of several Kii mountain peaks, three river systems and two Kumano Kodo trails. At the edge of town is Minshuku Momofuku, the most modest of our Kumano Kodo accommodations, run by jubilados like ourselves, Mr. and Mrs. Nakazawa. Hide’s passions seem to be growing bonsai, fishing and understanding what guests need. “This is your room, okay?” he asked. “Dinner at 6:30. Okay?” “Store where you can buy Asahi beer straight away and then left on the main street, okay?” Relaxed, the four of us wandered the town, Asahi in hand, and mouth. Maybe this is how Banff felt a hundred years ago.

Bill Bryson writes that “At times, you become almost certain that you slabbed this hillside three days ago, crossed this stream yesterday, clambered over this fallen tree at least twice today already. But most of the time you don’t think. No point. Instead, you exist in a kind of mobile Zen mode, your brain like a balloon tethered with string, accompanying but not actually part of the body below.” And you don’t talk. But arriving in Koguchi we couldn’t stop talking.

Hide and his wife served an excellent dinner
(Photo: Lynn)

Another example of the warm welcome the locals extend to travellers

At dinner we talked about the comfort cooking of Hide and his blue-haired wife (I wish I had her nerve). Yes, there was sashimi, as always. But Hide had made vegetable tempura. Potato salad! Avocado and tomatoes. Oranges for dessert. We talked about our second experience of osettai, supporting pilgrims with gifts. Our first osettai was from Maruo, whom we met briefly in Tanabe on Day One when he picked up our luggage promptly at 06:00 and gave us four blue-and-white head scarves (which Lynn and Ward wore daily) and a note on cardboard that read “Thank you Nice trip.” Our second was at the Koguchi convenience store (ponchos, souvenirs, beer), where the owner gave us fruit—persimmons—and genuine appreciation for coming this far and going the final leg tomorrow, the most difficult, which she described with gestures and sufficient English, as “wow.”

CNN Travel has a good article about the Kumano Kodo, what it calls “the world’s best unknown hike.”

An article in enRoute magazine introduced us to the Kumano Kodo.

We found out more about the trail from the Japan Visitor site.

Kumano Travel was our one-stop centre for the Kumano Kodo. We booked all of our accommodation, meals (except for Day Three’s lunch as you read!) and transportation for all of our luggage to arrive at each night’s destination. Flawless service. Their website has great maps and 46 audio tapes about the trail, like this one about rice growing.

The Gage: A Legend by Any Measure