I’m still in a bit of a shock over what happened today. Maybe as I age (remember, I’m only a year old) and get used to life in the wilderness (after all, I was born in Germany), I’ll roll with it more easily.

There were a few incidents leading up to this afternoon’s shenanigans. Like last week when the shadows were disappearing into blackness and my renters had me trundle down 40 km of gravel and 8 km of sheep track to find the Purakaunui Bay campsite a little faster than I really wanted to go. Although I have to admit the directions in the DoC booklet for the campsite location were confusing. And then the freak snowstorm in April! But my renters were from Canada, so they led me gently around corners and past cars that had slid into the ditch.

I was as excited as they were when I heard them say we’d be spending two nights at Glenorchy since Milford Sound was closed because of the snow. I’ve only been in New Zealand for a year (all my working life, you know) and every time my pals back at Wilderness Motorhomes return to the lot from a trip to Glenorchy, they shine their headlights on high beam with pride. I often have a copy of Scott Cook’s book NZ Frenzy with me and he says “Driving the road from Queenstown to Glenorchy is one of the beautiful experiences to be had in NZ, and thus the world.” It’s also a famous town. I’ve been told that many scenes from The Lord of the Rings trilogy and Narnia movies were filmed up at Glenorchy. And I heard my renters say that “Top o’ the Lake” with someone named Elizabeth Moss was shot there, too. So yesterday, I could hardly wait to drink up some diesel (don’t worry, I don’t drink a lot) and show off my maneuverability on the narrow, twisty, mountainous road that follows Lake Wakatipu to Glenorchy.

Tuesday night was great. I felt like I’d earned the name these renters gave me: Kohanga, which means “nest” in Maori. For an $80 rental fee, my manager includes Scott’s excellent freedom camping book, so my renters took his advice and parked me down past the wharf alongside Lake Wakatipu—the nicest nesting spot I’ve ever been to. (That fee also includes an atlas of detailed maps that highlight locations for my “bathroom breaks,” and a manual about my body parts.) Another campervan (bigger and older and not as streamlined or as nice-looking as me, frankly) pulled up and parked closer to the lake. I felt like she was in my space and my renters were a bit envious that these latecomers were closer to the lake than they were, but what could we do?

I’ve never seen a more spectacular sunrise than this morning’s. It reminded me of that Carl Sandburg poem “The fog comes/on little cat feet”. Then the mist cleared and in my transmission, I felt the town’s slogan “Head of the Lake, Heart of the Mountains.”

I like Glenorchy. It’s a small town with fewer than 500 people according to the references in my glove box. The buildings look like relics from a gold-rush movie set, but they’re authentic. There are a few general stores and a couple of small hotels. Something I won’t forget was seeing an old, red pickup being driven down the street by a young guy in a red, plaid shirt, the fresh carcass of a bloodied deer in the back of the truck, its legs dangling over the edge of the tailgate. The truck’s a bit rugged for me, but a girl has to look. I live in fear of hitting a doe. Little did I know I have other things to fear…

I winced and braked when my renters ignored the “No Campervans” sign and drove me up the road to the start of the Routeburn trailhead. It wasn’t that bad, actually. And I had to time to rest up while they hiked up to the Routeburn Falls hut. Because of the early snowfall, they said the trail was still closed beyond that. They also said they felt sorry for the poor sods who were stuck there freezing after coming from all over the word to do this tramp, which apparently is one of the 10 best in NZ.

Late in the afternoon when I pulled onto the sandy road down to the lake, I heard my renters talking about getting closer to the water tonight for an ultra-romantic spot. I edged my way forward on the hard sand, getting a little nervous as it softened. My grill could smell the water. All of a sudden, my front tires gave way. (Confession: they’re my weakness as I’m a front-drive girl.) I spun gently but that only dug me further into the sand. I couldn’t move. I was tilted to the left so much it started to make me a little woozy. I was so embarrassed.

The whole fiasco was witnessed by a couple of guys from Dunedin who are building a house in this area and were having a few post-work beers down at the lake. “We’ll give you a hand,” they told my renters.

The group collected some driftwood and put it under my wheels. Then the guys brought their truck over and tried to yank me out with what felt like string. Don’t they know I weigh 3500 kg?

“We’ll be back. Just going over to the Glenorchy Hotel for a wee bite and then we’ll go get a big towrope from our construction site to pull you out with,” the one I call Mr. Carpenter said.

“Cost you a few beers though,” said Mr. Painter in his splattered coveralls. I could smell the beer on their breath and was a little worried they’d have more with their dinner. And then what would they do to me?

I tell you, my renters were worried.

Here I am, waking up after our first night in Glenorchy on the shore of Lake Wakatipu 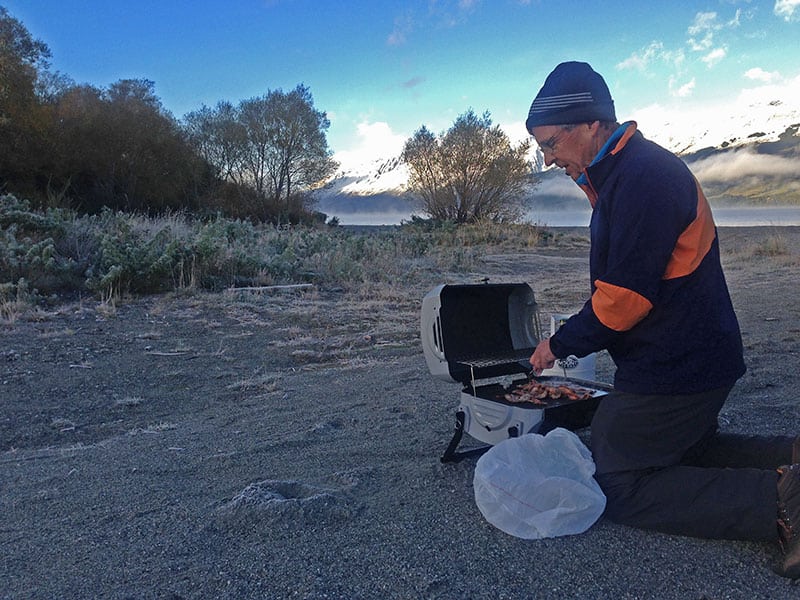 "Hide your eyes Kohanga," they told me, "We're going in"

Night was falling and so was I

The morning after; I love the sunrises here

The Remarkables: so well named aren't they?

Look at those embarrassing tracks in the sand from last night

She poured herself a glass of wine and turned on my little oven to warm up a couple of lamb potpies they’d bought at Ferburger’s in Queenstown, and he popped open a beer. They went outside because my tilt was as unsettling to them as it was to me.

I heard them talking about our dilemma. Would the Dunedin boys return? Would they be able to get us out? My renters had seen tractors down by the wharf. The guys had told them that Dart River Excursions uses the tractors for pulling out its boats—but that option wouldn’t be available until morning. How could my renters sleep at such a cockeyed angle? And how could I sleep with my rear end looking like I was going into a downward dog? I was getting dizzier by the minute.

Less than half an hour later, the Dunedin boys returned with a real rope and a third mate. They hitched the thick towrope onto my rear axle. Although I grunted my engine to warn them their truck was too close and on soft sand, I did give it all my power. But I couldn’t budge my wheels.

As the guys let out the rope to its full length to get their truck on hard pack, I knew that this pull was probably my last chance tonight. I gave it my all. And I, Kohanga, a Burstner Escape2, the smallest gal in our family of international award-winners—I did it!

I’m safe on firm ground now, resting alongside the lake. I’ve tuned myself into Glenorchy’s 89.2 FM station and listening to the music, I’m starting to calm down. I can hardly wait for them to turn out my lights so I can shut down and get some well-earned sleep before I see that sunrise again and let out a big honk when I coast around those slow corners on the open road.

Cook, Scott. South Island New Zealand: NZ Frenzy. USA: Scott Cook, 2013. My renters were crazy about this book. They read so many passages out loud that I can see why. Scott has a website, too.

I can be rented from Wilderness Motorhomes in Christchurch or Auckland. We’re the only group in NZ that allows renters to take us on gravel roads so we have a lot of stories.

For the Smell of It