A kilometre crescent of sunset-coloured sand

After contending with a blizzard at Milford Sound and pounding rain at Paparoa, Magellan and I felt like snow birds when we arrived at Abel Tasman National Park.

Located in the sunniest corner of the country at the top end of the South Island, Abel Tasman NP was so warm Kohanga turned off her heat for the first time in two weeks.

There was a swath of golden sand a kilometer long alongside the campground—like a scarf the colour of ripe papaya flesh in New Zealand’s natural monochromatic wardrobe of green. It looked, and felt, like the tropics.

You might wonder then, why I said, “I’m not looking forward to camping here,” when Magellan drove Kohanga into the park’s Totaranui campground.

However, it was a weekday in late April (autumn in NZ) and we were lucky. There were only a dozen other motorhomes—and Kohanga had Zone R to herself.

We’d chosen to stay at Totaranui, deriving its name from the many totara trees in the area, because it was the best place to day hike a section of the 60-km long Abel Tasman Great Walk. The hike only added to our discombobulated feeling. Skyscraper ferns, ridge-top ocean vistas, curvaceous beaches, secret coves and 90 percent humidity didn’t feel like the NZ we’d seen. We even thought about swimming in one of the hidden coves.

Few trampers were on the trail. A group of eight guys in T-shirts on the last day of their journey. A young couple camping on Mutton beach. Two park staff checking traps for possum and stoats—pesky pests that have decimated the birdlife in NZ. Hiking the Great Walk on her own, a woman from Vancouver Island.

“Did you see the whale?” people asked us as we made our way to Separation Point Lighthouse. We did. On one of the little beaches, the putrefying carcass of a baby whale was festooned with insects that had been picnicking for weeks. I wondered: how many whales did Abel Janszoon Tasman and his crew see when they landed here?

Another example of the well-mapped/signed trails in NZ

The Pukeko's beak matches the colour of the sand 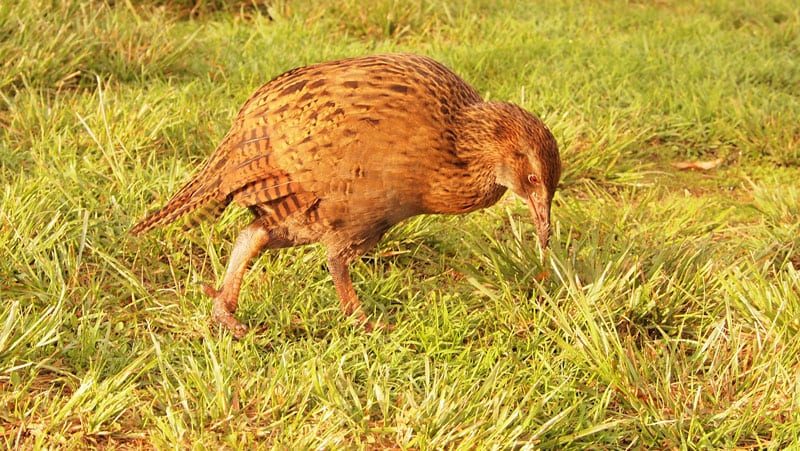 The flightless Weka camping at Totaranui

As it was high tide, we took the inland route past this old homestead

You can rent the old homestead

Where the jungle meets the beaches

Are we in the tropics?

Where we should have gone swimmming

Farewell Spit, a 35 km crescent with more than 90 species of birds

Janszoon. Now there’s a juicier name for this park established on December 18, 1942, to mark the 300th anniversary of Abel Janszoon Tasman’s visit.

At Separation Point where the waters of Golden Bay and Tasman Bay converge, the long views all the way up to Farewell Spit are dazzling. Signed impassable, the steep, broken-stone path down to the lighthouse was crossed with yellow tape. It was quiet, waves gently licking the rocks below. Then we heard the distant sound of birds. “Krok, krok, krok.” Like teenage ravens with sore throats. Walking nearer to the stairs down to the lighthouse, we saw snow-white birds nestled in the grass around the lighthouse and began snapping their photos. A young couple, trespassing and partway down, climbed back up to join us.

“What are those birds down there?” we asked.

They laughed. “False gannets. They have a bunch of plastic gannets and a sound recording of their calls down there to attract gannets from Farewell Spit to come over and establish a colony here.”

A few days later we walked the narrow, wind-blown crescent of powdery sand and native grasses that is Farewell Spit. And saw real gannets.

Back home, we discovered it’s not just me who likes the name Janszoon. Project Janzsoon is the name of the private trust aimed at restoring biodiversity in Abel Tasman National Park by bringing back Cook’s scurvy grass so as to attract more birds—and convincing gannets there’s a colony at Separation Point, thereby enticing them to relocate south.

Were I a “snow bird”, I think I’d be a gannet. Why not spend the summers on Farewell Spit and the winters on the warm, sandy-orange beaches of Abel Tasman National Park?

You can read more about Project Janszoon’s attempt to set up a gannet colony here, find out more about Totaranui campground here and check out NZ’s easiest Great Walk here.

The “Inyo” of the Yuhodoh Hike on Japan’s Mount Tsurugi

Getting In (and Out) of Casa Anselma
Scroll to top