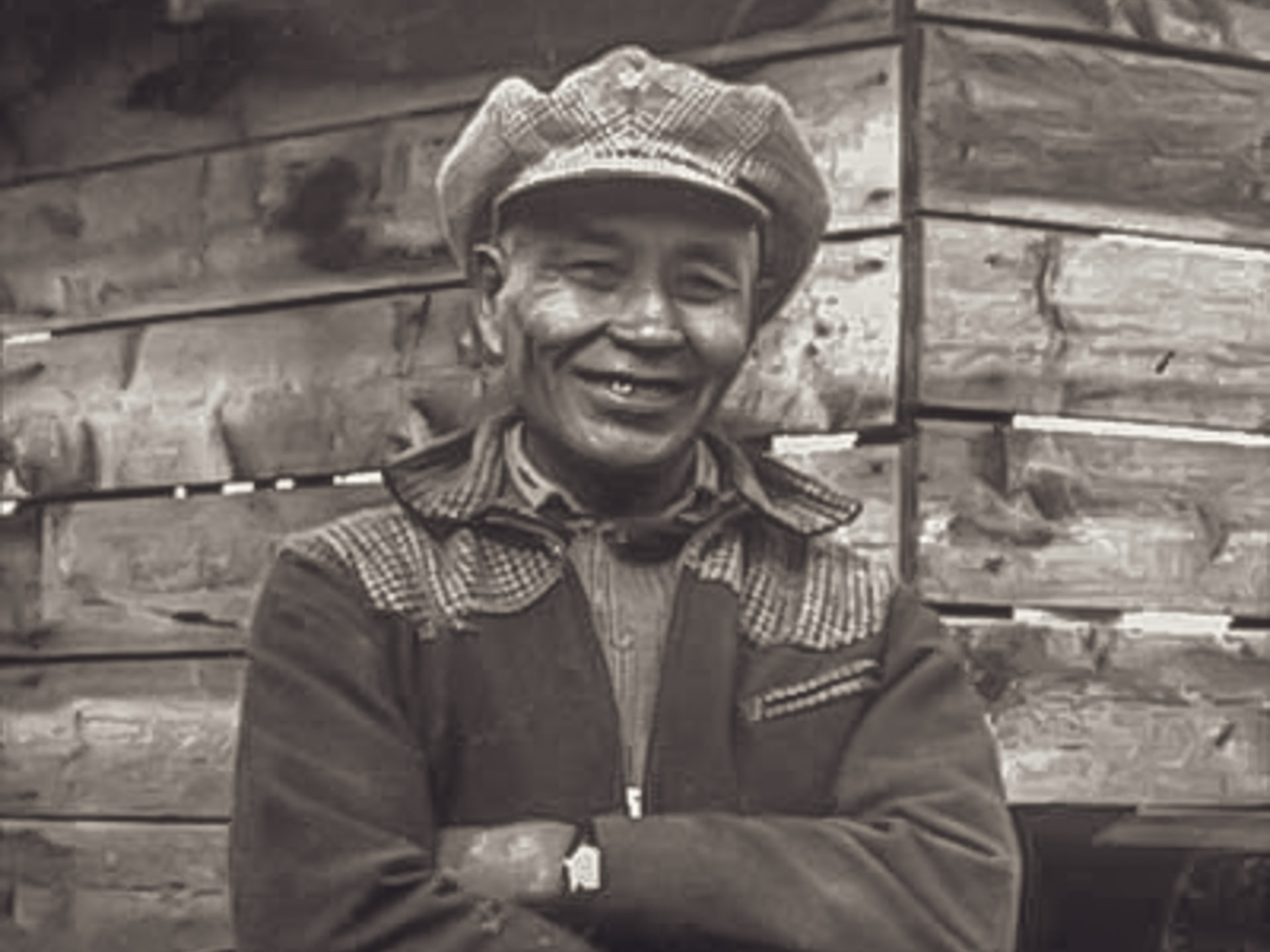 A combo of indigenous and ingenuity—indigenuity is the perfect description given to a remarkable Inland Tlingit man named George Johnston.

Magellan and I arrived at the George Johnston Museum in Teslin, Yukon, on a Saturday afternoon, barely an hour before closing time. There, we discovered the museum’s namesake, an unschooled man whose superb photography illuminated the “Golden Years” of his people. George was also the first person up there to own a car. Quite extraordinary because when he bought it, there were no roads in Teslin and George didn’t know how to drive!

The Golden Years in Teslin began around 1910 when George was thirteen years old. Teslin was on the Canadian route to the Klondike, it had a Hudson Bay Company trading post and the village was a growing base for hunting and trapping.

Around this time, George ordered his first camera (and a developing kit) from Eaton’s catalog. According to the Teslin Historical and Museum Society,

George had no tripod and rarely used a stand or prop, preferring hand-held shots. He stored his camera in a homemade hide box in order to transport it with him in the car, boat, and on foot in a pack.

George processed his film in the back room of his family’s bush cabin, where he taught himself how to develop his own pictures. As you can see he was a genius with his camera. The Yukon Archives attributes more than 300 photographs to George but he gifted away so many that this number is likely far short of his artistic output. With pride, Canadians can say George’s photographs are in The Smithsonian.

Edward Jack of Atlin and George Johnston with pelts, 1920

Cars for sale outside Taylor and Drury Store in Whitehorse, 1928

George Johnston's Chevy is barged home after getting stuck over winter, 1940

A dollar a ride: George Johnston and his assistants greet customers

George Johnston with girls' baseball team at a church picnic, 1941

George Johnston standing in front of his store in Teslin, 1951

There were no other visitors in the George Johnston museum and the only employee on duty, an animated young woman who clearly loved her job, was eager to answer our questions and show us around.

As soon as you walk in, you’re transported back in time by the unique entrance, a storefront selling local jams and arts and crafts, and copies of seven of Johnston’s photographs printed on heavy postcard stock. The young woman immediately directed us to the next room to watch “Picturing a People: George Johnston, Tlingit Photographer” made by the award-winning Teslin Tlingit filmmaker Carol Geddes for the National Film Board. It is superb. Local actors re-enact George’s life and there are interviews with his daughter Dolly Porter, his nephew Sam Johnston and many Teslin Tlingit elders. A huge highlight for visitors, George’s car is on display.

A museum not to be missed as you wander up the Alaska Highway (Photo: George Johnston Museum)

Hunting and trapping provided a comfortable lifestyle for the Inland Tlingit in the first half of the last century. During the time of the First World War, a silver fox fur brought in $1,000—a black fox even more. In 1928 with money he saved from his fur-trapping, George went to the newly opened Taylor & Drury Motors in Whitehorse and purchased the first car the dealer ever sold, a brand new four-cylinder AB Chevrolet costing $926. The dealer shipped the car to Teslin and his son gave George driving lessons. To accommodate the vehicle, George and his brothers widened about five miles of existing footpaths, roads that later became part of the Alaska Highway. In the winter, driving was easier because George used the river as a roadway.

In caring for his car, George showed great ingenuity. This from Dr. Nicole Strathman’s dissertation, my main source of info:

When he ran out of gasoline, he fueled it with naphtha, a flammable solvent that was often used in lanterns. When a tire blew out, he sewed it up and patched it with moose hide. In this period before anti-freeze, he kept his car’s radiator water over a fire, and when he spotted game out on the frozen lake, he replaced the water and “with one crank he was off. He operated his car as a community taxi, charging one dollar each way and naming his business the Teslin Rapid Transit Company. Johnston named his car Sequeet, meaning “my little slave/like my son.

George didn’t have a son. His wife, Lucy James from Carcross, died in a hunting accident in 1935 leaving him a widower with their eleven-month-old daughter, Dolly. He never remarried, raising Dolly himself with the help of his family. He took Dolly hunting, fishing and woodcutting. In the NFB film we saw, Dolly says she wasn’t allowed to drive Sequeet nor even sit next to her dad in it—“that space was reserved for his camera.”

Sequeet was forest green in colour. But here’s another bit of George’s ingenuity. In the winter he painted Sequeet white like the snow so she’d be less noticeable to animals he was hunting. It’s said that during Sequeet’s first winter, George and his brothers shot more than 60 wolves from the car and were paid $75 for each pelt. This is the first recorded history of First Nations people in Canada hunting from a motorized vehicle, which led the scholar Daniel Wildcat to coin the word indigenuity to describe George. A month before we were at the museum, the Yukon Transportation Hall of Fame inducted George and him named Pioneer of the Year.

In 1942, US soldiers arrived in Teslin to build the Alaska Highway. A year later, 128 of the 135 Teslin Tlingit were sick with measles. George took a photo of five Teslin children playing “funeral,” described as, “one child in a makeshift casket while the others act as grim little pallbearers. The scene takes place on the porch of a store with cream soda bottles visible through the window.”

Around 1945, George stopped taking photographs. The Golden Years were over. The devastating measles epidemic, changes to trapping laws, lower prices for furs and bifurcation of Inland Tlingit lands by the Alaska Highway brought “irrevocable changes” and “fewer good times to photograph.” George turned his energies to operating a general store and learning more about his heritage. When he was sixteen, he’d trekked hundreds of kilometres to coastal Alaska in search of the history of his people, a quest he continued, taking many trips to the see his coastal cousins, collecting art and artifacts and studying Tlingit customs.

Efforts to create this museum were led by Bonar Cooley, a local non-First Nations historian and preservationist, and his wife, Bess, a respected elder of the Teslin Tlingit. It opened in 1973. Before he passed away in 1972, community leaders told George the museum would be named in his honour.

Disingenuous am I. Only after I finished writing this story and went into our Lightroom files to see our photos from the George Johnston Museum did I remember that in gulping up all we could about George, we hadn’t taken any photos! (Which you’ve probably already noticed.)

As the filmmaker Carol Geddes says, George’s legacy was “to help us dream the future as much as to remember the past.”

Big Creek Campground is at KM 1042 on the Alaska Highway

Geddes, Carol. “Picturing a People.” NFB film, 1997. This fifty-minute film is a joy to watch.

George Johnston Museum. It close at 5 pm—give yourself more than the fifty minutes we had there. All of the photos in this blog (and more) are from this museum and can be found in virtual museum.ca.

Strathman, Nicole Dawn, Doctor of Philosophy in Culture and Performance University of California Dissertation, “Through Native Lenses: American Indian Vernacular Photographies and Performances of Memories, 1890-1940.” 2013. A great resource about George’s life. No doubt she is one of the main reasons that George’s photographs are in the American Museum of Natural History at the Smithsonian, in an exhibition with the same title as her book.

In 2013, George’s photographs entered the American Museum of Natural History at the Smithsonian

Do You See What I See?

Gray Bay: What’s in a Name?

Sagebrush:  From Fame to Bankruptcy to Renaissance?

The Foxes Come to Visit
7 replies

“In cod we trust”